“We found a way to get it all out there”: Code Orange on finding guitar nirvana

Reba Meyers and Dominic Landolina on Strats, riffs and putting it all together on Code Orange’s brutal new album Underneath. 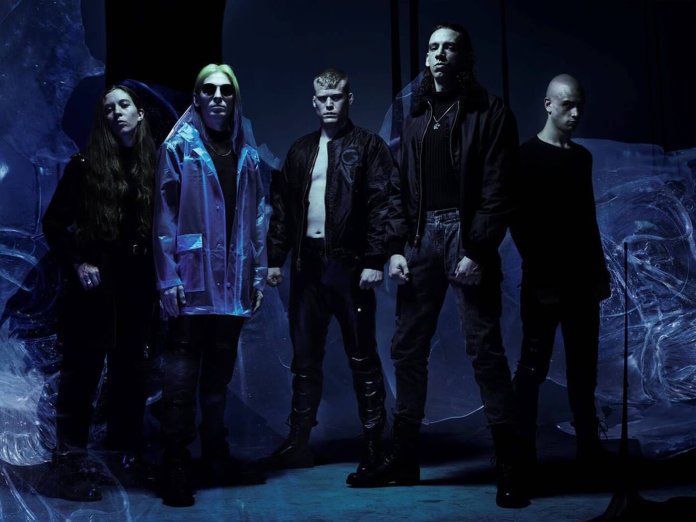 There’s a moment midway through Code Orange’s Swallowing The Rabbit Whole that sums up their musical approach. As the song hits terminal velocity, everything stops for a second. It’s like a glitch or – to betray some grey hair at the temple – a CD skipping. It’s there to mess with us, to keep us guessing. It’s a reminder that we’re not in charge.

The Pittsburgh metallers’ new LP Underneath is like nothing they’ve out to date. It’s still ferociously heavy and splattered with industrial-derived electronics but, here, they have managed to seamlessly mesh those two elements into a single terrifying whole. One moment, our attention is being grabbed by a whirring sound somewhere in the distance, the next we’re being flattened by teeth-bared riffing. There’s nowhere to hide.

“In the past, we’ve imagined these ideas but weren’t able to put them together in a way that made sense,” says guitarist and vocalist Reba Meyers. “But at the stage we’re in with the band, we found a way to get it all out there. With the level of sonics that we’ve figured out how to manipulate, we were able to do that. We put the work in and it was very rewarding to be able to imagine all these sounds and precise things, and actually turn them into reality.”

Code Orange formed in 2008 as Code Orange Kids, dropping the Kids prior to the release of their unconscionably fierce second album I Am King in 2014. From day one, they have balanced competing creative threads, with Meyers, guitarist and programmer Eric ‘Shade’ Balderose, and drummer-vocalist Jami Morgan having been there every step of the way.

Bassist Joe Goldman subbed in to allow Meyers to switch roles in 2011, with the band’s long-time friend Dominic Landolina joining on guitar in 2017. “They’ve been doing this since we were in high school, since we were not even fully developed people yet,” Landolina says of Meyers, Morgan and Balderose. “They have this dynamic. Sometimes I’ll just sit back and watch them go.”

Cold.Metal.Place/Sulfur Surrounding from our empty venue record release livestream a few days ago. LAST ONES LEFT: In Fear of The End will stream on YouTube tomorrow at 7pm and we will be answering your questions live down we go ??

On Underneath, Meyers and Landolina locked themselves away to write riff after riff, with Balderose later deconstructing everything in order to find pockets of digital space. As a result, it is neither entirely a guitar record nor an experiment in studio trickery. It’s a hybrid: the hardcore version of The Terminator’s cybernetic organisms.

“We had this grand idea about what we wanted to do,” says Meyers. “We wrote all of the songs and demoed them before we got to the studio. They were for real demos, practically an album. We wanted to redo them in a more legitimate sense. We came with this insane album and we were trying to redo it all, so it was even better. That was a pretty challenging task. The one thing we did have on our side was that we were all on the same page musically and in terms of the vision. We all knew what we wanted. That’s the only reason it worked – the unity of the group.”

Helping to make that vision a reality was producer Nick Raskulinecz, who shared the reins with Morgan and the returning Will Yip. Having balanced forays into metal with bands such as Deftones and Mastodon with high-profile collaborations with Foo Fighters, working with Code Orange took the veteran into uncharted waters.

During recording, a gruelling process of 10 to 12-hour days across almost two months, they perfected Underneath’s genre-splicing intensity and walked out with a record that attacks moments of melody and flecks of 1990s alt-rock as though they are a pit that needs an injection of mayhem. After that, they decamped to Yip’s studio to mix at night because of the producer’s hectic schedule.

“He had an open mind and was willing to take it as far as we needed to take it,” says Meyers. Throughout, Meyers played her custom ESP Viper. “It’s just the best guitar,” she says. “I played that on all the heavy songs, all the rhythm tracks. I’m so attached to the Viper that I just play better when I play it. I’ve been playing it since I was little. You have to be playing gear that you’re comfortable with or [the material] will never reach its full potential.”

Landolina is a subscriber to that belief. He’s something of an oddity in modern heavy music, slinging sickeningly powerful riffs from that most 1950s of designs, the Fender Stratocaster. “It’s what I’ve always played,” he says. “If you put a Strat in my hands with the lights out, I can tell that’s what it is and where the frets are. There are some difficulties in getting it to sound just right with heavy music – a lot of times you have to throw a different pickup in the bridge [his stripped-down Strat of choice features a single EMG57 in the bridge] or make sure that you EQ your amp the right way and have a good overdrive pedal.”

Between them, Meyers and Landolina have helped birth one of 2020’s most savage and exciting records. Underneath is a tumultuous fight between their guitars and Balderose’s wild tangents – and it all ends in a big bloody draw. But at its heart, you’ll find nothing more than a big idea, chemistry and hard graft.

“I absolutely love playing guitar with Dom, learning riffs, writing riffs. We work really well together,” says Meyers. “We both play in a pretty similar way, so it makes it easy in terms of riff style. We’re able to track very linked together. We tracked the rhythms in a couple of days and were really particular about it. After that, I got locked in a room and did the overdubs. I was like, ‘Alright, I’m gonna get this fuckin’ done.’”

Code Orange’s Underneath is out now via Roadrunner Records.