Trivium’s Corey Beaulieu on his 70-strong guitar collection, and discovering the riffs that made him want to play

He also discussed the new approach the band took to their new LP What the Dead Men Say. 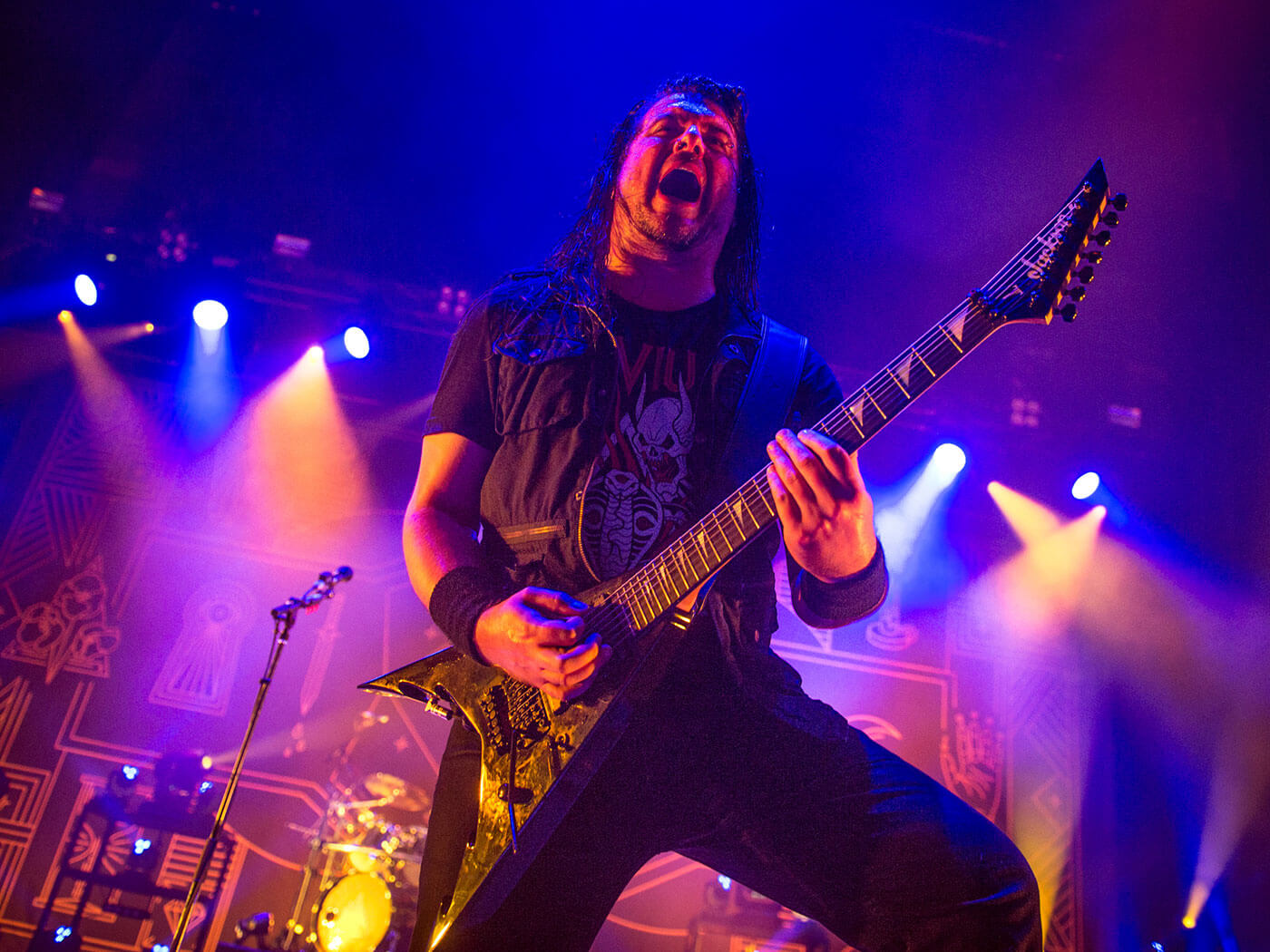 Last week, we spoke with Trivium frontman and guitarist Matt Heafy, about his extensive collection of guitars and the new approach the band took for their latest record What The Dead Men Say. This week, we’re talking to co-guitarist Corey Beaulieu, whose thrashy riffing has been gracing our ears ever since the release of the band’s breakout Ascendency.

The 36-year-old tells us all about his jaw-dropping guitar collection which exceeds 70 instruments, the new record’s collaborative songwriting and the importance of switching up your tunings every now and then.

We understand the band took a new approach with What The Dead Men Say. Can you talk about it?

“The last record we wrote, I think we ended up recording 14 or 15 songs, and obviously, not all of them could go on the record, so we had a bunch of stuff leftover. For What The Dead Men Say, we thought, ‘Let’s just write exactly what we want to put on it, and not have to deal with an excess amount of material. Let’s just do nine songs – ninth record, nine songs’. For each one of us, it was figuring out what was our favourite stuff that we’d done – so we all brought in three song ideas each, did our usual jam with everyone putting their two cents into the song. It was cool to do something where everyone could throw their ideas into the pot. We’ve never produced a record that way, with everyone bringing in the same amount of song ideas.

“Some stuff just took a drastically different turn, just from someone else hearing it and saying ‘I think we can do this.’ And that’s the great thing about when we start jamming as a group – there’s a lot of stuff that ends up being on the record that, individually, we would never have thought of, or taken the song in that direction. We’ve become accustomed to embracing that, instead of being so guarded like ‘this is my song, I want it to be like this’. I think everyone is fairly open, and looks forward to seeing what happens to a song when the group all contributes to it.”

What gear were you using on What the Dead Men Say? Was it the same as Matt?

“Yeah, all the main stuff was either a Peavey JSX or a Peavey Triple X II with an Ibanez TS9 in front, and an ISP decimator. To get right into recording, we actually ended up tracking everything with our Kempers, and once we’d tracked it all we went back and re-amped with the Peavey setup, as we always like to use a cab obviously.

“For my solos, I always use an Eventide H3000 unit, but apart from that, that’s pretty much it. We don’t really use a ton of effects. Everything from all our records is based around some kind of Peavey 5150 amp.”

Did you experiment with the tunings at all?

“The tunings were pretty much identical to the last record, The Sin and the Sentence. We have our Drop C# six-string stuff, and also the B♭ standard seven-string tuning. And then there’s one song that’s got the new tuning that we started using on Silence in the Snow: a dropped seven-string, so Drop G# .

“It’s always fun to have a variety of tunings, because it definitely opens you up to different creative ideas and different kinds of songs to write. Playing metal, there’s obviously the go-to keys, but you don’t want to write every song in that key. Since we finished the record, even, I’ve been writing on the seven-string, but not using the low B – just playing old-school metal, effectively in E ♭.”

Let’s switch gears for a bit. Did you have a moment early in your life that made you go ‘This is it. I want to make the guitar my career’?

“When I was a kid, I’d just listen to whatever my older sister or my parents had on the CD player or in their record collection, I wasn’t ever a big music listener. Then I remember seeing the Guns N’ Roses record that my mom bought, Use Your Illusions II, just throwing that on and hearing that was a big life-changing moment. All I did for quite a while was listen to Guns N’ Roses, the internet wasn’t exactly rocking back then to go look for stuff on.

“Once I ended up discovering Metallica, that was the big ‘I need to play guitar’ moment – when I heard their style of riffing, that spoke to me more than the old-school rock ‘n’ roll stuff. I just thought, ‘Oh, shit, that sounds amazing, I need to learn how to play that’. And the first Metallica record I got was Master of Puppets, which is obviously a ‘holy shit’ record.”

Speaking to Matt, he mentioned you’ve got quite an insanely large collection of different guitars.

“Yeah, uh, I’ve lost count [laughs]. I think the last time I counted it was maybe 70-something? I get sentimental about stuff, so I just never, ever get rid of gear. Just because, no matter what guitar it is, or amp or anything, if I use it on tour or played on a record, it’s like, I’d feel bad if I got rid of it. Like, ‘Aw, man, I don’t have that guitar that I recorded with on Ascendency.” Even if I don’t play it, if it’s just sitting in my closet, the fact that I know I still have it makes me feel good. I’ve still got all my Jackson stuff from way back in the day, all my guitars from when I was in high school. The only guitar I ever got rid of was my first guitar.”

“It was an Epiphone Les Paul that I got by mistake. I’d ordered a guitar through Musician’s Friend magazine, and it was supposed to be an Epiphone, which was like 180 bucks. And they ended up fucking up the order and sending me an Epiphone Les Paul, which was like three times the price but charged me for the other guitar – so I kind of scored on that [laughs]. But I sold it to get my next guitar, but other than that, yeah, I still have everything.

“The other day I pulled out one of my early Jackson guitars that was in A Gunshot To The Head of Trepidation video and on the Ascendency record, and gave it a run-through. It’s always fun to kind of just dig one out of the closet, and play around with it.”

Are most of them Jackson Vs like your signature?

“Most of my Jacksons are either King Vs, my signature model or prototypes that were made when developing my signature guitar. There are a couple of others. When I first got into rock and metal music, getting a taste of wanting to play guitar – I was into Guns N’ Roses. So when I got the Epiphone Les Paul by accident, I was pretty stoked, because Guns N’ Roses were basically the only band I knew at the time.

“Then, once I started becoming a huge Megadeth fan, back in those days Dave Mustaine was playing Jackson King V’s – that started my obsession with Flying V guitars. Seeing him play King V’s, that was my ‘That’s the shit, I want to play that’ moment. Just seeing it in magazines, or whatever, I’d always think that it was the coolest shape and most badass metal guitar. It took me a while before I was able to get one, but, once we got signed and Ascendency came out – right around when we were doing Ozzfest in 2005 – I finally got a King V. And that was huge to me – a bucket list thing.”

Out of your whole collection, could you pick a ‘desert island’ guitar?

“There’s one in particular that I’d pick, a prototype that was made to finalise my signature model body style, with a lot of extra details on it – and after it was made, Jackson basically said ‘This isn’t gonna be possible…’ With all the details, they’d have had to sell this thing for $5,000 to make money off it, as there was so much to make happen. I was like ‘Oh, I guess I can’t do that. That’s ridiculous.’ But they made the one guitar, and it’s incredible. It looks great, it plays great. If I could do anything with a guitar, without cost being an issue – that was it.

“It was my signature shape, with this trans-black finish with a white binding – which was the thing that made it so ridiculous. To put binding on a really jagged-shaped guitar, that’s expensive. But it looks amazing. It’s been at home, and I love writing and recording with it, but I wouldn’t bring it on tour – I don’t want to mess it up in any way.”

You’ve also got a new signature model on the way – what’s new there?

“The biggest difference is the new Winter Storm paint job, a transparent white look that Jackson’s been developing over the last year or so. I’ve never done a guitar in white, and definitely want to switch things up from the previous one I did in matte black.

“Beforehand, also, all the USA models had an unfinished neck, really fast-playing, it felt really great, but the production model had a painted neck, with the matte finish. This time around the production run is more in line with the USA ones, as it’s got the unfinished neck as well – so it feels the same in the hand. It’s pretty amazing how they’ve been able to make it pretty seamless between the two.”

Unfortunately, the coronavirus pandemic continues to hit bands hard – how has it impacted you, and your tour with Lamb of God, In Flames and Megadeth?

“I don’t think anyone really knows right now what’s gonna happen. The first leg of the tour was supposed to be happening now, but that’s been moved to June. We’re all hoping that it can happen, but we definitely don’t want to cause any kind of health scare or put people in danger. We’re fortunate that we haven’t had to cancel or reschedule a whole lot, and it’s such a killer tour, a really amazing collection of bands.

“We’ve been off tour for quite a while now, playing at home and so on. I’m really excited to get back out playing for the fans, especially with the new record coming out – I’m so stoked for it. I’ve known the Lamb of God guys for a while, toured with In Flames a bunch and obviously everyone’s a huge Megadeth fan so it’s great to see Dave and Megadeth back playing again after what he’s been through.”

What the Dead Men Say is out now. Read our interview with Trivium co-guitarist Matt Heafy here.