“It would be weird if you had no self-doubt about what you do” Courtney Barnett on putting self-criticism aside and leaning into the mystery on Things Take Time, Take Time

The Australian guitarist on Jaguars, POGs and channelling the vibe of misbehaving kids next door on her third long-player.

Courtney Barnett’s third studio album is the sonic equivalent of a warm, embracing hug. For many the last two years have been lonely and tough. For Barnett, it’s been a time of enforced introspection and noticing the poetic in the most humble domestic circumstances. More than any other artist, she has proven her mettle with documenting suburban ordinariness with just enough humility and humour to elevate it into art.

She is on the phone from Joshua Tree, California when, early in our interview, she gasps loudly then laughs in that laconic, laidback Australian fashion. “Oh my god, a bee just flew at me! Sorry, that’s what that noise was.”

It feels as if we have inadvertently become part of a Courtney Barnett song. These are the sort of innocuous moments that Barnett imbues with profound meaning, transforming them into paeans to suburban life – as our conversation continues, we can’t help wondering what the secret meaning behind the disruptive insect might be.

Barnett’s latest solo album, Things Take Time, Take Time opens with an ode to the Melbourne street she was living in while self-quarantining in her friend’s empty apartment. Barnett had been touring and writing in the US before the pandemic, but confronted by the rapidly escalating concerns over Covid, the Grammy-nominated guitarist opted to return home to Melbourne.

“Just before I came back my friends, who are also my managers, let me take over their apartment and they went and stayed with family,” Barnett explains. “I had this beautiful little apartment in North Fitzroy. I was really lucky to have that space and be able to walk around Merri Creek and stuff.”

In Rae Street, a quarantining Barnett finds inspiration in the most innocuous daily rituals that she performs or witnesses from her window in the Melbourne suburb: a garbage truck, changing the bed sheets, even the family next door (“next door the kids run amok, the mother screams ‘don’t you ever shut up’? And there’s one thing I know the sun will rise today and tomorrow”). 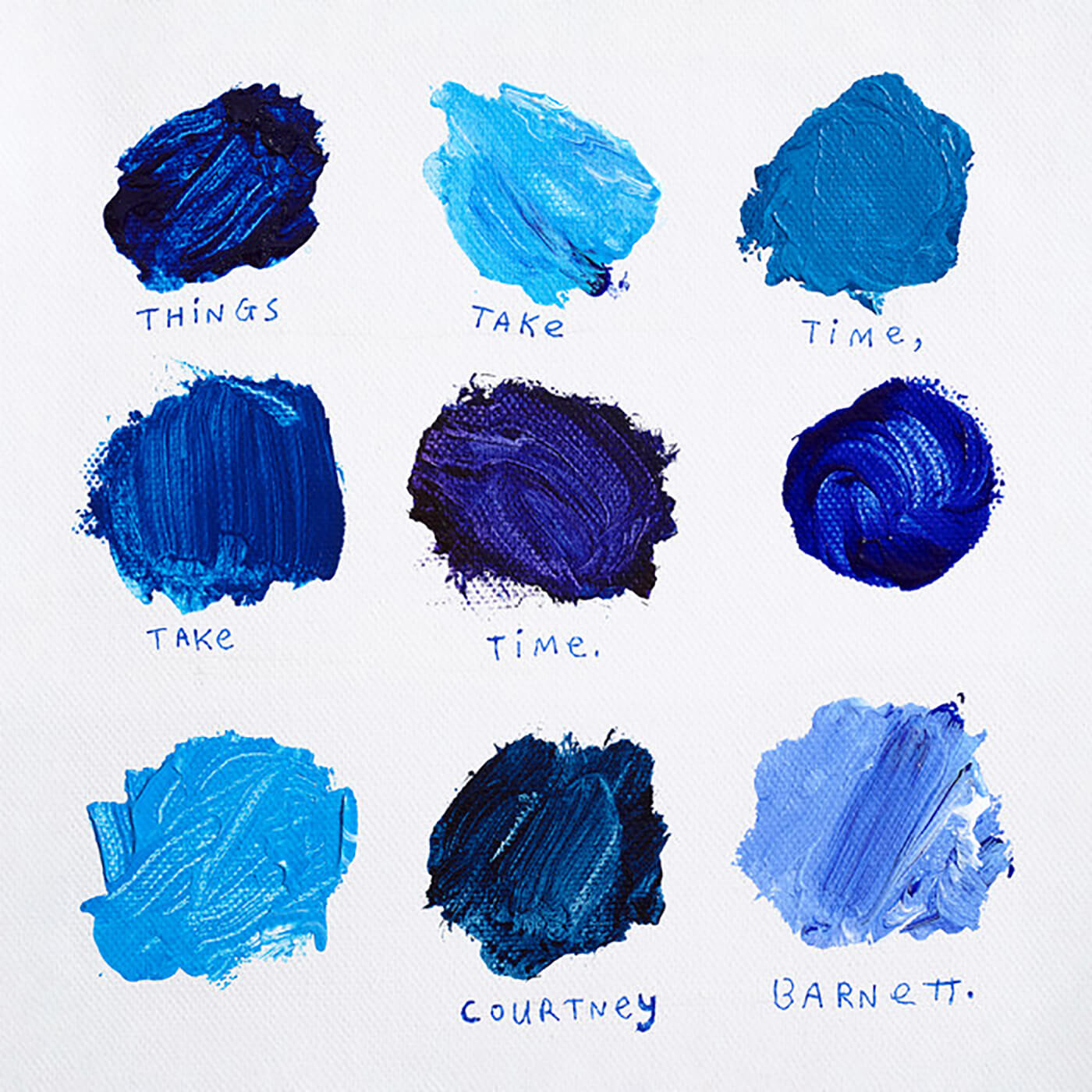 Since the release of her second album, 2018’s Tell Me How You Really Feel, Barnett had been touring and working relentlessly, giving her very little time to focus on making the album she really wanted to make. Then the pandemic happened, and while Barnett continued to perform as much as she could online – including a memorable outing at Melbourne’s Royal Exhibition Building – the enforced break finally gave her time to focus on the album in the way she needed to.

Her ambles through quiet Melbourne parklands and learning how to cook for herself gave her a sense of balance, which is felt in the intimate and emotionally candid lyrics. All the while, she was collaborating with co-producer, Warpaint’s drummer Stella Mozgawa on the album. The two had established an easy rapport on Barnett’s Lotta Sea Lice, her 2017 collaboration with fellow indie-rock hero Kurt Vile.

“I couldn’t tour and everyone was face to face with: what is life, what do you want, what makes you who you are?”

“Stella and I definitely talked a lot about music that we liked,” Barnett explains. “It didn’t start off as reference-kinda conversations. We were just swapping music back and forth. It was this organic way of showing each other the kind of sounds that we liked, and the style, and what was suitable. I would send her demos I was working on, and she’d say, ‘I think you might like this song by this person’, so it felt organic in that sense. A lot of that music was very different, all over the place. I definitely wanted [the album] to sound warm… I wanted it to feel close and warm and familiar. I wanted to capture that repetitive, meditative kind of feeling that the songs had as I was writing them.”

The pair shared music as diverse as Arthur Russell, Leonard Cohen, Nina Simone, Brian Eno, CAN, Alice Coltrane and Floating Points, and while that might not be instantly apparent upon listening to Things Take Time, Take Time, the nature of lockdown meant they all played their part.

“With the time to listen to more music, it all kinda soaked in somewhere,” she says.

Barnett has never been one to indulge in rock ‘n’ roll excess when it comes to the making of her record, and so it’s no surprise Things Take Time, Take Time, recorded at Sydney’s Golden Retriever Studios in the midst of Covid-19 is pared back to the bare bones.

She took just two instruments into the studio with her, a custom Maton acoustic guitar, and her go-to Sunburst Kurt Cobain Jaguar.

“I used to play the Tele a lot, and a couple of Strats, but as soon as I got a Jag, I was more drawn to that sound,” she explains. “There’s a bigness to the sound that I couldn’t get on my other guitars without lots of pedals, but I feel like I can plug that guitar in and completely clean, it has this richness to it.”

The studio had been recommended by Mozgawa, and while it was initially intended to be the first studio of many, the vibe of the place captivated Barnett, and she quickly decided that she’d record the whole album there, jetting between Melbourne and Sydney to record over the following months.

“I’d recorded a few bits and pieces all over the place, and I was going to make a bit of a jigsaw album, but then, as soon as we started working there, there was just a good energy. We worked with two people there, Simon [Berckelman] and Chloe [Dadd]. We didn’t really take any gear with us. I just took the two guitars and Stella took her cymbals and Simon had this nice old gear. Working within parameters, not having to rely on too much gear [was a relief].”

In the past, Barnett has battled the demons of overpowering self-criticism, but here she leaned into the sense of self-doubt as being a natural part of the creative process instead of letting it hobble her.

“Writing became the way I process
my thoughts. So I don’t know if
it’s therapy – it’s just necessity”

“It would be weird if you had no self-doubt or criticism of the stuff that you do,” she explains. “My ongoing lesson is how to balance and juggle those feelings, and they’re always gonna come up because it’s human nature. So, how do you deal with them and move on, and not go into a depressive hole about something?”

Instead the album is melancholic rather than depressive, with just enough shimmering moments of curiosity and wonderment to lift the spirits. As confessional as her lyrics are, sometimes even she is surprised when listening back to her songs later, and none more so than the surprisingly upbeat, Here’s To Me.

“I think there’s a lot of mystery in songwriting,” she accedes. “I try my best to stay open to it because I certainly don’t know everything about it, you know. I wanna learn more. I think a lot of the beauty of songwriting is it helps to reveal things about ourselves or about other people… There’s a lot of layers and I always find that really fascinating. I can write a song and a year later, understand this hidden element of myself. Here’s To Me… there’s something special about the song to me. It really came out of nowhere, almost fully-formed. There’s something special about that, I didn’t do that. I don’t know where that came from!”

Things Take Time, Take Time is an evolution, but still sounds fundamentally like the Barnett of old. Like a security blanket for listeners, the album is something to cosy into rather than expose our naked souls to this newly reopened, harsh big world. It reflects the intimate way the songs were written.

“Especially in the last year, I couldn’t tour and everyone was face to face with what is life, and what do you want from life, and what do you do and what makes you who you are as a person?” she reflects. “And, if you can’t do that thing, what does that mean? Writing did become the way that I process my thoughts, and the way that I learn how to communicate with people. So, I don’t know if it’s therapy, it’s just necessity.”

As pared back as the album is, relying on fingerpicked guitar and a drum machine at its core, there is a depth of sound and a lushness that feels enveloping and homely. With time and opportunity for adventurousness, Barnett has sought out that depth with pedals and effects.

“I kinda jump between rhythm and lead a fair bit,” she says. “Over the last few years, I’ve experimented a bit more with pedals and tried a few different things. But, mostly I’ve always had a mix of distortion or overdrives and then, some more reverb/delay type pedals, maybe a chorus or something. The [EHX] Freeze pedal has been fun to play with. On the album, I had a POG I used a little bit, and I’ve been using one of those Earthquaker Organizers; it kinda sounds like an organ.

“They’re cool. You can dial in the lower harmonic and the higher. It’s in a similar world to a chorus pedal or a POG. It adds this other layer of depth. Sometimes I play with a second guitarist but not really at the moment, so I like to be able to thicken out the sound.”

She won’t be reliant on pedals in place of a band for much longer. With the world gradually opening back up again, soon Barnett, Mozagwa and touring band members Dave Mudie and Bones Sloane will be touring across America, Australia and Europe. The album that began in a Melbourne apartment will finally get to spread its wings across the world.