If a background troubleshooting IT issues for the US Government seems an unlikely foundation for a career winding pickups, it certainly helped Curtis Novak learn to sort the essentials from the snake oil… 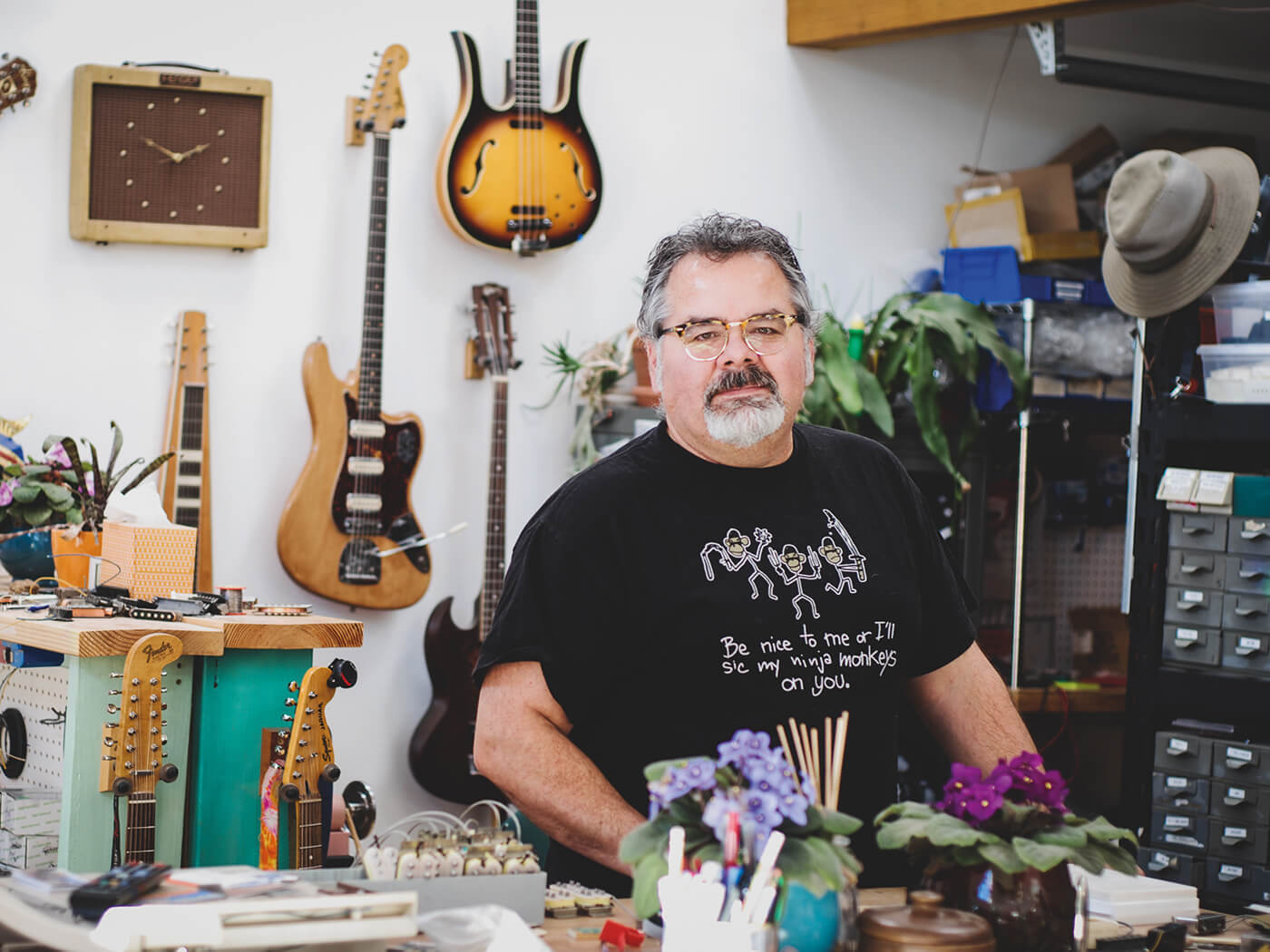 Guitar forums are awash with talk of alnico V versus alnico II this, plain-enamel versus formvar-coated that, and what resistance reading your Strat pickup or PAF needs to be to achieve ‘authentic vintage tone’. Ask New Mexico-based maker Curtis Novak to build you a pickup to your trendy specs checklist, though, and you’re likely to hear a ‘click’ at the other end of the line as he turns back to more important matters.

Novak has learned over his 20-odd years of making pickups professionally (backed by a good 15 years of winding them on the side before that) that the only way to guarantee customer satisfaction is to play it by ear.

The results have yielded highly acclaimed pickups to fit just about any guitar or playing demand. Novak and his five-person crew are particularly known for a long-time specialisation in a range of Jazzmaster pickups, while having introduced some of the earlier Gold Foil-style replacements available anywhere, and from Strat, to Tele, to PAF-style humbucker, to stealth Melody Maker replacements and beyond, he’s got a coil to suit virtually every need.

“In the early days, I was kind of like a short-order cook,” Novak tells us. “I’d stand there with all the stuff and people would tell me what they want, and I’d whip it up. And I learned over time that the people who were really, really picky about it could never be pleased. I would do all this stuff and some guy would get really upset. ‘They say you’re the best, and this doesn’t sound at all like I expected it.’ And I would say: ‘Well, what were you expecting it to sound like?’ They’d tell me what they wanted to hear, and I’d say: ‘God, if you’d have told me that I never would have wound what you asked for!’

“So I switched, probably about 15 years ago,” he adds, “and I don’t talk specs. I won’t talk specs. I want to hear what you want it to sound like. The way I break it to a musician is: ‘If I catch you playing in a bar or a venue, I may request you to play a song, but I’m not going to tell you what key to play it in, because you’re the professional. Or if I’m going to go to a dentist, I’m not going to tell them how to fix my tooth.’ When people tell me they have to deal with specs, I say: ‘No, there’s plenty of other people you can go to with a punch list.’ I offer a full refund, and very rarely do I ever get pickups back.”

Novak was born in 1965 and grew up in New Mexico, where his early ogling of the instruments in the Sears and Montgomery Ward catalogues segued into hands-on messing with guitars and electronics. The youngest child in a large family, his siblings had all been provided school-band instruments and the like by Novak’s parents… until he came along. Following wreckage and carnage and the expense of years of hire-for-purchase woodwinds and battered percussion, they weren’t falling for that one again, so young Curtis had to fend for himself once the bug bit.

“In junior high,” Novak recalls, “a couple of my friends were playing instruments and so forth, and one of them got a new guitar for Christmas and was selling his old one, so I bought it off him with my lunch money for the year. I enjoyed playing a lot more back in those days, but what I realised was I’ve always been more intrigued by how things worked and the mechanics of it, and what made things sound differently. I quickly ended up buying a few more guitars when I was a kid, just because that one would be apart and I wouldn’t have one to play, so I was always finding these interesting instruments: ‘What’s different with this one? Why does it sound different from that one?’ and all that.”

The first craft inspired by Novak’s early guitar deconstruction, though, was refinishing – and he earned a reputation in that arena that equals his current standing as a maker of world-class replacement pickups. The practice of scavenging for old stripped Fenders at the local pawnshops and refinishing them to accurate vintage colours helped put Novak through college in the mid-to-late 80s and soon he had customers coming to him for vintage-spec restorations.

“I was right in the area where Buddy Holly lived and recorded,” he says, “so there was always a good amount of vintage guitars you could get real cheap. I did a lot of research to get the actual Fender colours from DuPont Duco, and there was an old auto-body shop there that still had the old paint book, so I resurrected the old colours and got that going. Fender used to refer people to me for vintage restoration, but I just didn’t want to be around those chemicals all the time. And by doing all that [finishing] research, I ended up doing a lot of pickup research on the side, and eventually, I got enough where I thought I could figure this out.” 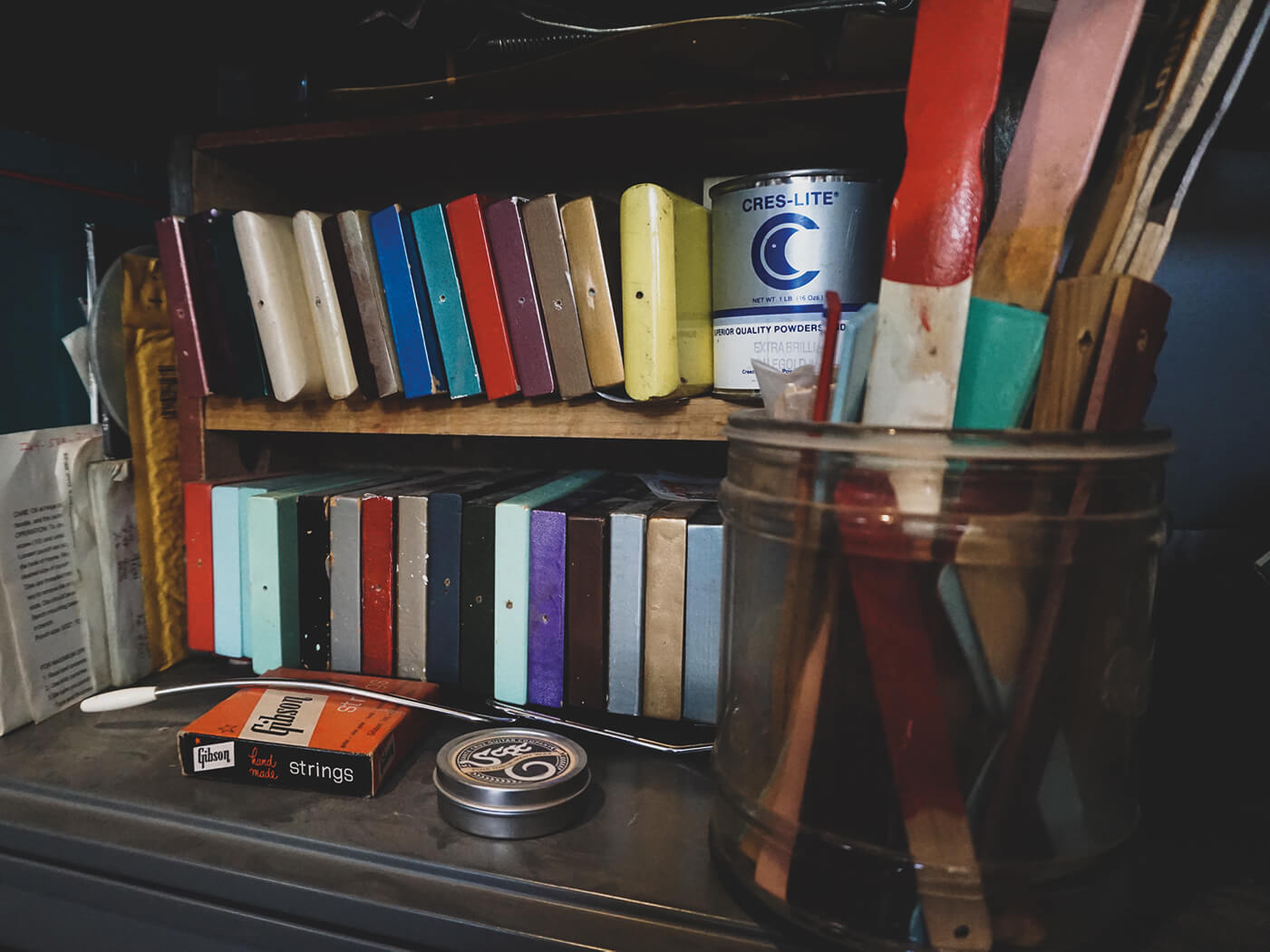 Long before this, his first deep dive into the intricacies of coil winding had come out of necessity. While still in junior high, Novak decided his first electric guitar – a cheap Japanese Strat copy – just didn’t sound as good as it should and he began to suspect the pickups as the culprits.

“I convinced my parents to get me a set of Seymour Duncan Strat pickups for Christmas,” he recalls, “and I installed them in the guitar. It was like night and day. They were great, but I didn’t get covers with them and the covers on my cheaper guitar didn’t fit, so they were just in there with raw coils. A friend of mine borrowed the guitar and bent the E string down over the coil while he was playing and broke the pickups. For a week, or maybe two weeks, I had really awesome-sounding pickups and then they were broken.

“So my parents were like: ‘See, that’s why we don’t buy stuff for the kids – they break ’em!’ [laughs]. I would stare at these coils, remembering how good they sounded and it was one of those things that I was set to figure out. This was well before the internet and there wasn’t a lot of information on how to do it, or where to get wire and so forth. While I was doing other work, it sat on my bench and eventually, I was able to figure it out and do something that worked.”

Novak says he learned a few things from his pal Jason Lollar and that he used his lab R&D experience – and the bountiful hardware available from local US government surplus stores – to build his own winders… “just like Leo’s old winders”. He insists that hand-winding his pickups (meaning, hand-guiding the wire onto coils turned by a motorised winder) is one of the major keys to their resultant sound.

As he tells it: “I swore that if I ever grew this bigger than just me, no matter how big it gets, everything is going to be hand-wound. I try not to spend too much time on the science and wondering why that is, but… with the cam-wound, machine-wound pickup, every wrap lies next to every previous wrap and it goes back and forth and it’s totally uniform. My theory – and I have zero desire to take it anywhere past a theory – is that what you’ve done is maximised wire-to-wire contact so the signal’s not as rich. Whereas with a random, hand-wound pickup you have really minimised the contact from each wrap.”

To many pickup enthusiasts, this practice will be known as ‘scatter winding,’ the technique of layering wrap upon wrap in a semi-random fashion. Alongside this, Novak also tends to dismiss the notion that there are any ‘magic ingredients’ that must be included to get a pickup to turn out a certain way. Which is not to say that materials don’t matter, but the specifics of components don’t matter as much to the overall results as does construction technique – something belied by today’s guitarists’ obsessions with the minutiae of ‘vintage correct’ ingredients.

“I used to do a lot more car restorations when I had more time,” says Novak, “and the parallel I use is that when people wonder what it is that makes a Camaro so fast, they’re wasting their time measuring the thickness of the vinyl on the seats.”

Although he feels he’s thoroughly debunked the notion that the ‘ageing process’ itself somehow imparts mystical characteristics to guitars or pickups, Novak does believe a vintage-like approach to manufacturing can make a significant difference, particularly in the extent to which any pickup’s coil is wrapped with wire.

“When I was restoring [vintage guitars] and repairing them and going through a lot of them, I just naturally catalogued all of this information. Looking at one thing to the next, it came to me that, you know, Buddy Holly’s Strat sounded really good when it was brand new, and Eric Clapton’s Blackie and Brownie, when he did the Layla… sessions, were just 10-year-old guitars and they really sounded good. And if it is just a factor of age, the 80s Strats would be sounding really good now, and they just don’t.

“I think it’s a handy argument to say when somebody’s making something: ‘Oh, these don’t sound at all like the vintage ones,’ and you look at them and everything looks the same, so you say: ‘Gosh, it must be the age.’”

Instead, Novak discovered long ago that what are now often called ‘vintage wound’ pickups – those made with fewer wraps of coil wire, therefore exhibiting relatively lower resistance readings – offer the key to greater dynamics, tonal complexity and overall versatility in use, particularly when coupled with other vintage-style manufacturing techniques.

“There are things that I’ve noticed that vintage pickups have that weren’t there later,” he says, “so I’ve instituted a lot of those, and I think that’s had a lot to do with the sound of the pickups I make. I just didn’t follow the typical approach of everyone else.”

Regarding hotter, over-wound pickups, Novak notes that some players might indeed want that all-fire-breathing-all-the-time performance, but that you’ve really got nowhere to go when you try to back out of that. “Back in the day, you know, Joe Strummer played the same Tele that Merle Haggard played and Ritchie Blackmore played the same Strat that Eric Clapton and Buddy Holly played. Where you take it is what matters. Nowadays, they’ve got all these over-wound pickups and all and they’ve got a million different artists’ Strats, but that artist only ever played the same one that everyone else played, originally. They didn’t have all this special stuff.

“But when you start tailoring things to that degree of ‘custom’ and getting out of that vintage realm… a vintage pickup, you could take it in so many directions, but an over-wound pickup, you can’t go that far with them.”

Find out more at curtisnovak.com.