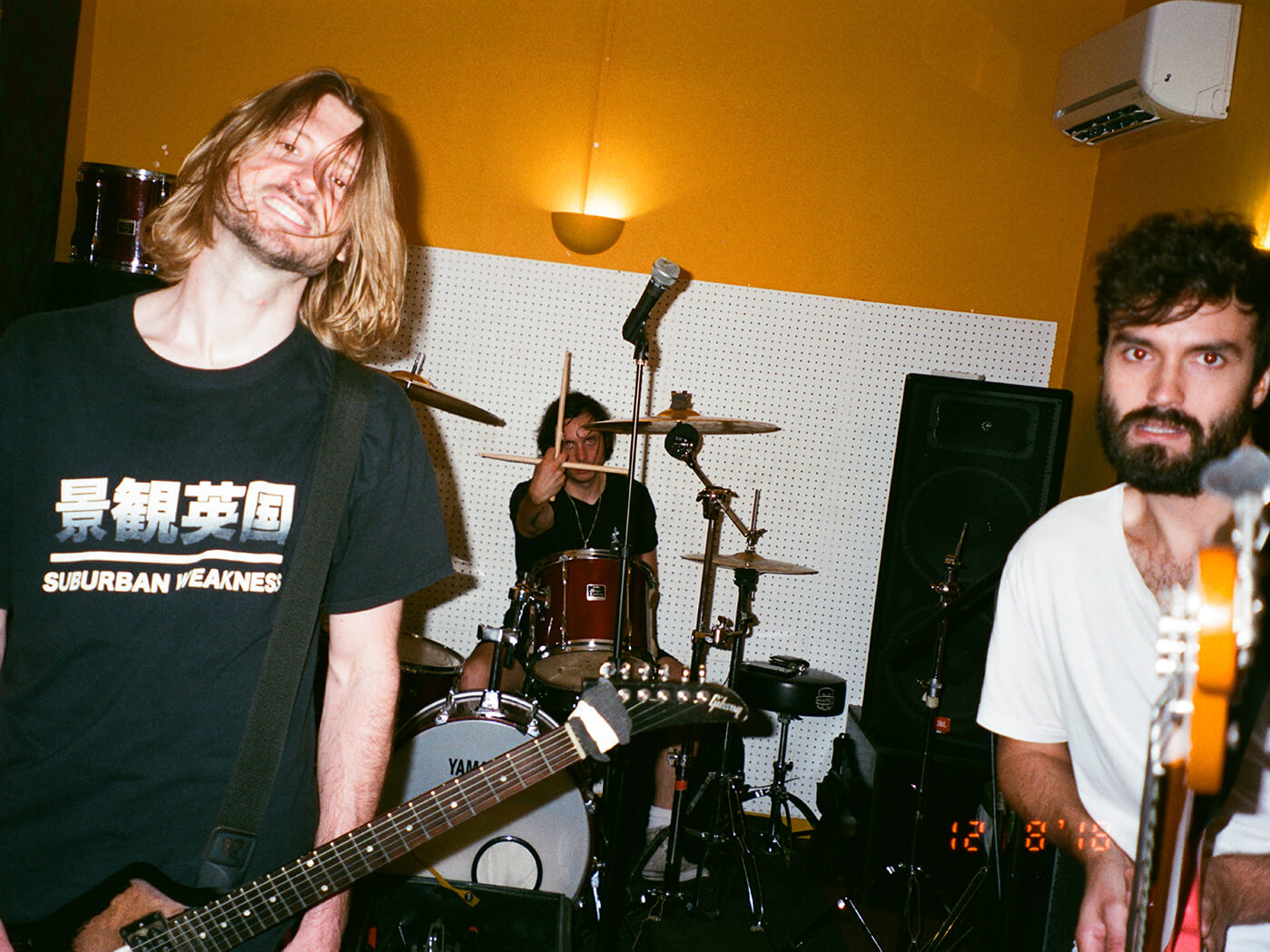 Leeds alternative rockers Dinosaur Pile-Up have been bringing bruising riffs and killer hooks to the masses since 2010, but their brand-new major-label debut Celebrity Mansions sees the power trio kick things up to a new level.

We asked frontman and guitarist Matt Bigland to pick his five guitar highlights and found out about floor-to-ceiling amps, head-banging stage hands and unstoppable solos…

“The middle section might be my favourite moment on the whole record, to be honest with you. It’s just so fun and out there. I love that it was a half-a-second decision to take the song that way just because it felt cool and as soon as I’d done it, I was like, ‘Oh shit, that kicks!’. Half-time heavy-metal breakdown out of a manic, heartbroken punk song with Beastie Boys snapshots? Uhhh… yes please!

“I honestly couldn’t tell you what amps we used, because the pile of heads (and I literally mean a pile) went from the table they were all on to the ceiling of the dingy studio room we were in. We used the ceiling itself to lodge in the heads on top of the table. It was a joke. There were a bunch of Marshalls – JCM800 and a JMP for sure – a Diezel VH4 which we’d borrowed, an old Laney Klipp that me and Larry Hibbitt [producer] had previously set on fire. There was a bunch.

“Pretty sure we used Gibson Explorers and SGs on the chorus and riffs, and tripped-out Fender Jags on the verses. All the little bends and trills popping out all over the place at the start of that heavy-metal riff were just me fucking about before actually taking on the second half. I was like, ‘Cut all that out’ to Larry and then we played it back and I was like, ‘Actually, leave all that in, it’s awesome!’. We really didn’t give a fuck on that bit, thinking back on it, really. I think that’s why it’s so rad. We were just having such a good time getting heavy!”

“I love the riff… well, the whole song, actually. It’s fucking awesome. But coming up with that riff is one of my favourite memories of writing the album. We were sound-checking in Orlando at the House Of Blues there, and I was just noodling about waiting to play my rig for our sound guy. I just bust out this riff and started going with it, and I turn to my left and in the corner about 15 feet away, like in the shadowy bit at the edge of the stage, I see this stage hand just listening, and he is in to it.

“He’s fucking banging his head, digging that riff!! I was like – ‘Shit! That’s got a vibe going already? That’s fast!’ So I made sure I remembered it! He must’ve thought it was one of our songs that we were going to play that night or something – I was like, ‘He’s gonna be so bummed out when we don’t play it… but I haven’t written it yet!’”

“The Back Foot riff is really weird, when you think about it. It’s basically a noodle. And it’s so lucky that it even became a song, because I wrote it in the shower! I literally must’ve sang that little riff like once, for maybe 10 seconds or something. And I thought, ‘You know what, fuck it, I’ll record that on my phone because it’s okay’. So I did. Got out the shower, recorded it on my phone. Didn’t think anything of it and it so easily could have been forgotten about.

“But I didn’t forget about it, I kinda kept thinking about it. And then the next day, I thought, ‘Fuck it, let’s look at that little weird riff…’ and from that moment, I didn’t sleep for four straight days because it earwormed its way into my poor brain and I couldn’t sleep until I’d finished it. It was horrible and awesome, ha ha! It really showed me the importance of running with even the smallest of ideas.”

“I love the intro to Pouring Gasoline, because I think we were recording with an SG or something, decided to change over to a noisy Jaguar and just recorded me plugging it in and going straight into a take and we’re like, ‘That’s awesome, leave it.’ I love shit like that, just like interesting beginnings or intros that haven’t been castrated of all their vibe. You’re making a rock record, it should sound like one.

“We were thinking of songs like Territorial Pissings and Smashing Pumpkins vibes a lot with this track, so we DI’d a bunch of horrible overdrive and fuzz pedals to get some of the sounds on this. I can’t remember what we used in the end. But I know we tried a RAT and a Boss Metal Zone, maybe this banged-out old pedal from the 60s called Fuzztone or something. I dunno. Whatever it is, it sounds cool.”

“The solo in Long Way Down is one of my favourite moments of the record, or more specifically, the end of the solo. Because on one of the takes, I just kept on playing and wigging out at the end where I was meant to have stopped. I was just kind of really enjoying or feeling the emotional energy of the song and I was, ‘Fuck it! I don’t wanna stop yet!’ so I just kept on playing through.

“I kinda just wailed a bit and pulled around the neck and then found this little groove of a melody that kind of fit with the vocal and the progression and everything – and I just kind of sat into that and played it out till the very end of the track. And we were like, ‘That’s fucking cool!’. It’s kind of a bit out-of-tune-y, some of it might be a bit out but we literally only did one take of the solo with that ending on it, so we just kept it.

“We didn’t want to fuck with it too much, or try repeat it and make it better. It just had a feeling about it and an energy and sometimes you shouldn’t fuck with that. All too often, people cut the nuts off a song because they’re scared of it not being perfect. But so often, that’s exactly the wrong thing to do. It’s got to be good of course, but it’s got to be real, too!”

Celebrity Mansions by Dinosaur Pile-Up is out now on Parlophone.