“Focus on yourself as a player before anything else, that’s what matters”: Doll Skin’s Alex Snowden on bringing the rock

The 20-year-old Arizona guitarist on Schecters, Green Day, a Mega-manager and the importance of practice…

Doll Skin always had a knack for writing anthemic, pop-punk songs like modern-day Runaways. On their third release Love Is Dead And We Killed Her (Hopeless Records) a heavier Doll Skin has emerged musically, as well as lyrically.

Doll Skin, who are managed by Megadeth bassist David Ellefson, met at the School Of Rock in Arizona, where they forged an early bond. “We were some of the only girls around the scene and in School Of Rock. There was definitely a very cool friendship from the beginning,” says Snowden. “We were playing these obscure, B-side tracks that were such a hit with crowds, they were like, ‘These teenage kids know that song?’ It definitely padded us with some very cool music knowledge.”

That early woodshedding resulted in a guitarist whose mastery belies her years. On Love Is Dead And We Killed Her, Snowden’s playing covers it all – from rhythmic picking and killer guitar harmonies to blazing solos. This time around, she added a seven-string axe for fleshing out some of the rich, low-end numbers. We spoke with Alex while the band was on tour with New Found Glory and discussed the album, her live rig and more.

When did you realise you wanted to play guitar?

“I was nine years old and my mom took me to see Green Day on their American Idiot tour, and it blew my mind. I remember being like, ‘Whatever that guy is doing with that guitar, that’s what I want to do.’ I want to be onstage playing my guitar for people who love it. It was so thrilling and stuck with me so hard and fast. Literally the next day, I said: ‘Mom, I really want to take guitar lessons.” And she was like, ‘Well, you don’t want to do anything else, so let’s get it done!’ [laughs]. I officially started guitar lessons as a present for my 10th birthday.”

Who are some of your guitar influences and inspirations?

“It’s so broad, but when I really dig in, Green Day and Avenged Sevenfold were my absolute first loves. Synyster Gates still to this day is definitely at the top of my list. But I love anything John Petrucci does. That guy has a big place in my guitar world; Joe Satriani, Steve Vai and Nita Strauss. I also follow a lot of jazz guys: Joe Pass… John Scofield is a huge influence of mine. I’m nowhere near his skill level, but I would still say that he’s an influence. My personal musical taste and my influences are definitely very different from what I do in Doll Skin. I’m into progressive metal and I’m a huge jazz nerd.”

Guitar-wise, did you play your Schecters on the new album?

“We were in the studio working with Mike Green and he had all sorts of fine guitars, a cool baritone Stratocaster and older Gibsons and we kind of messed around with those a little bit – he had them set up in lower tunings. But I primarily used my Schecters on the album. A lot of it was my Schecter Hellraiser Hybrid UV Tempest. That’s my newer one and I used my seven-string [Schecter Hellraiser Hybrid PT-7]. I did a lot of writing with it. The seven-string was a very cool addition. We really tried to push ourselves to live out this dream of being a little bit heavier and introducing this new edge on the album.”

Overall, everything feels heavier on this album. The drums sound huge…

“Yeah, Meghan’s a powerhouse. Heavy was a very ‘heavily’ used word during the writing process. We really wanted to drive that home. We were talking about it long enough, we were like we need to do this, and we need to do it hard [laughs]. Heavy music is definitely my love. I was just stoked that it was even in the realm of this album. I’m excited to expand on it in the future.”

The main riff in the title track is really melodic and memorable and your solo stands out – what effects do you use on it? 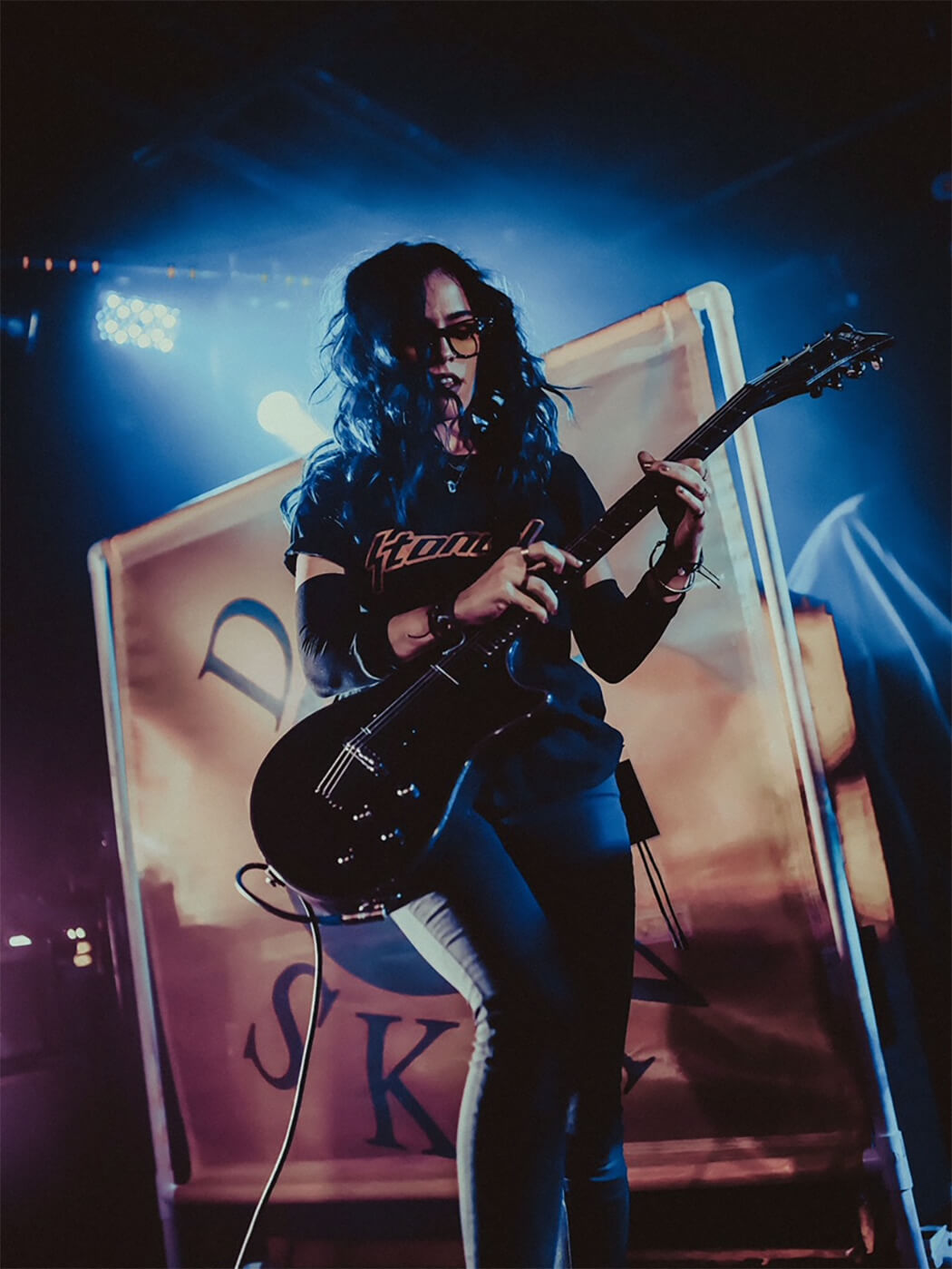 “That was one of the songs written on a seven-string, I don’t play it on the seven-string live, but I think that totally gave it a very cool, dynamic point, you know, just having this really low end. But like you said, it’s a melodic riff. It’s cool. I think that may be my favourite song, if I had to pick one. It’s actually a Whammy pedal on the solo cranked up to a high octave. We were playing with pedals and wanted something real colourful and different. We wanted to throw something kind of wild in there. I’m absolutely obsessed with that pedal [DigiTech Whammy DT]. It’s my favourite part of the set.”

You’re a dynamic player, but all of a sudden, you have ‘rock moments’ like your pick scrapes; how does that type of thing flow for you?

“I’ve got to credit some of those texture things to our producers. We’d listen through the song and one of them would go, ‘Hey, throw this in there, try this, here.’ I guess a pick scrape isn’t at the forefront of my mind when trying to fill the space with a texture, but it always just knocks it out of the park. It always seems to be perfect.

“It’s such a good feeling when you nail one of them live, you’re like, ‘Ah, hell yeah! That just felt good.’ It’s like this very thrilling, abrupt noise and everyone’s like, ‘Whoa, that’s so punk rock!’ – and then I’ll go into this very clean, little jazzy bridge; ‘and what do you guys think about that?’”

What are your goals, tone-wise?

“I think it’s ever-evolving. My rig consists of a set of Blackstar 2x12s – one to the side is a guitar-only monitor – and an ISP Theta Pro DSP and Stealth power amp. My Schecter guitars will always be a part of my live rig, they have a superior tone and durability. My ISP unit has been so incredible and the Blackstar 2x12s are convenient on the road.

“I definitely prefer big old half-stacks at home for an ideal tone. I have one of the 2x12s behind me, mic’d like normal. It’s brilliant. I don’t need my guitar going through these crappy monitors. It’s just my tone straight through my amp, right into my face [laughs]. I’ve just started doing that on this tour and it’s absolutely the best decision I’ve made regarding my stage setup.”

Can you offer a piece of advice you’ve learned three albums in and after being on some big tours?

“My favourite bit of advice is to focus on yourself as a player before and after anything else, because that’s what matters. If you want to be a musician, an artist, it’s the skills you possess and present and if nothing else, you can work on yourself. It could be any sort of day in the world, but I have my guitar and I can practise and hone my skills and better represent myself as a player.

“I think that’s important to focus on, especially the touring aspect where there is so much going on. You gotta practice, hone your skills and be confident in yourself as a player. Anything could get you down, but at the end of the day, it’s me and my guitar and I’m so happy about that.”

Eagles of Death Metal’s Jesse Hughes on Bataclan gunmen: “I forgive them and I hope that they find the peace of God themselves”