“We’re finding out what it means to be uniquely Eastman”: Otto D’Ambrosio on what makes Juliet the company’s most important guitar yet

The Chinese company has made a name for itself producing high-quality takes on classic designs, but now it's aiming to carve out its own niche with a unique solidbody platform that’s already touring the world.

From convincing the world that Chinese-made guitars can go toe-to-toe with the best the USA has to offer in terms of quality, to introducing us to a finishing method that totally rips up the rulebook with spectacular tonal results, Eastman Guitars has crammed an awful lot into the last half a decade or so.

In recent years the brand, which made its name creating instruments inspired by Golden Era classics, has also branched out into the riskiest of territories – the original electric guitar design. The first fruit of this was the Romeo, a thinline hollowbody devised by Eastman’s chief designer Otto D’Ambrosio and International Sales & Product Development Manager Pepijn t’Hart and debuting in 2019. Familiar yet unique, the Romeo went down well enough that the design saw a second iteration, the Romeo LA, arrive in 2020, but walking the show floor of the final NAMM before the pandemic, Pepijn and Otto were thinking about what would come next.

“We wanted something that was uniquely ours,” Otto tells us of the conversation between the two friends. “We were walking around NAMM on the Sunday afternoon, beer in hand, just trying to figure out where Eastman would fit in. We had such great success with solidbodies that were very influenced by Gibson designs, but we really wanted something with a unique vision of our own.” 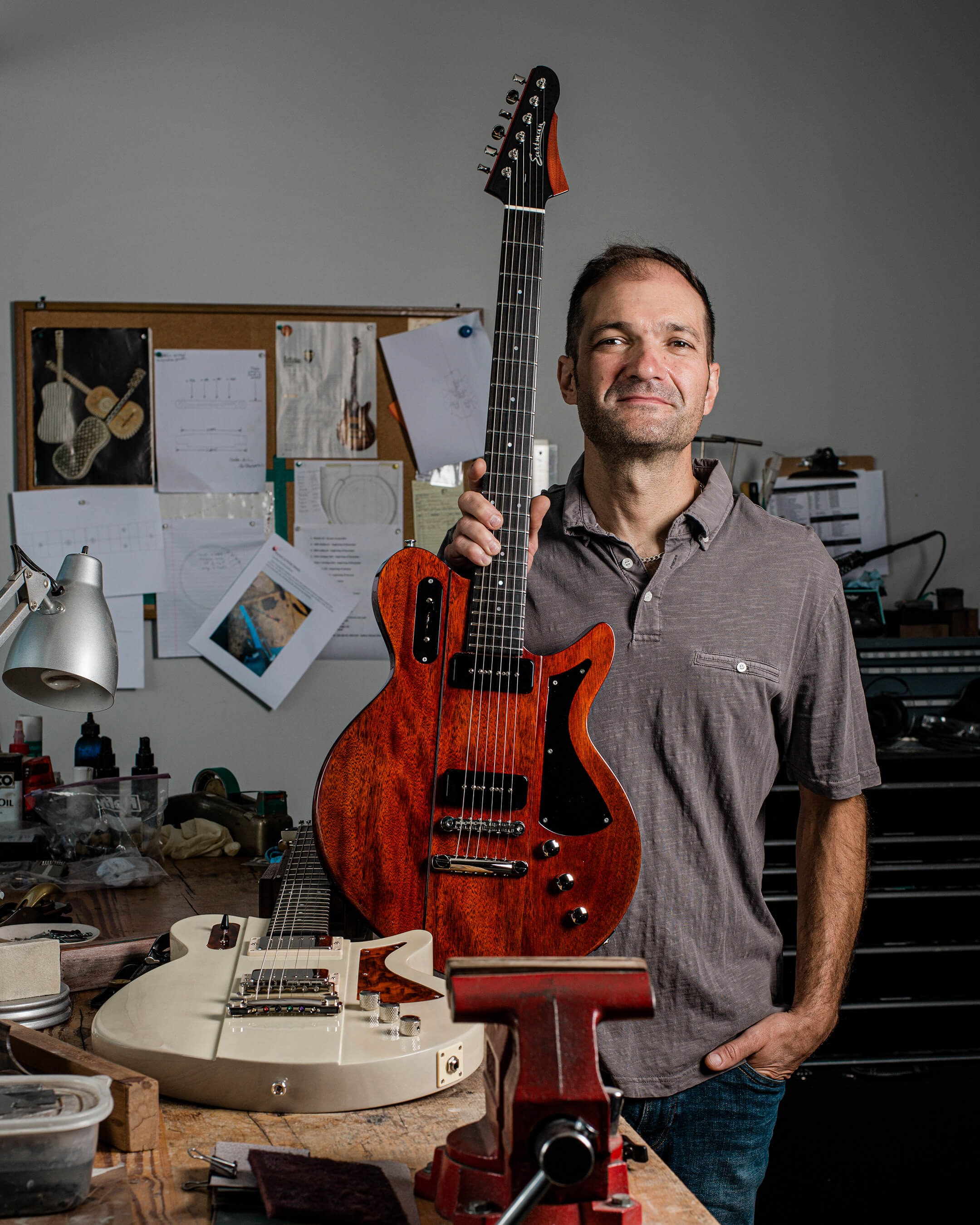 The result of that conversation is the Juliet, a companion to the Romeo, but a very different one – an offset solidbody electric, with a stepped six-in-a-line headstock. This clearly ain’t your daddy’s Eastman, but that was very much the point. “We were thinking the Strokes, Iggy and The Stooges, we were thinking a rock ‘n’ roll machine!” Pepijn exclaims. “But then we were also thinking, ‘How can we incorporate elements of our favourite guitars that maybe have little flaws?’

“The Firebird is so cool, but It’s so heavy, and the neck always goes down because of the banjo tuners, and then the body hits you in the teeth! So the middle raised part was something that we really wanted to do. And wanted to have a guitar that could either have two humbuckers or two P90s, and then we both love the aesthetics of a Jazzmaster, which is I think, the most beautiful guitar design out there. 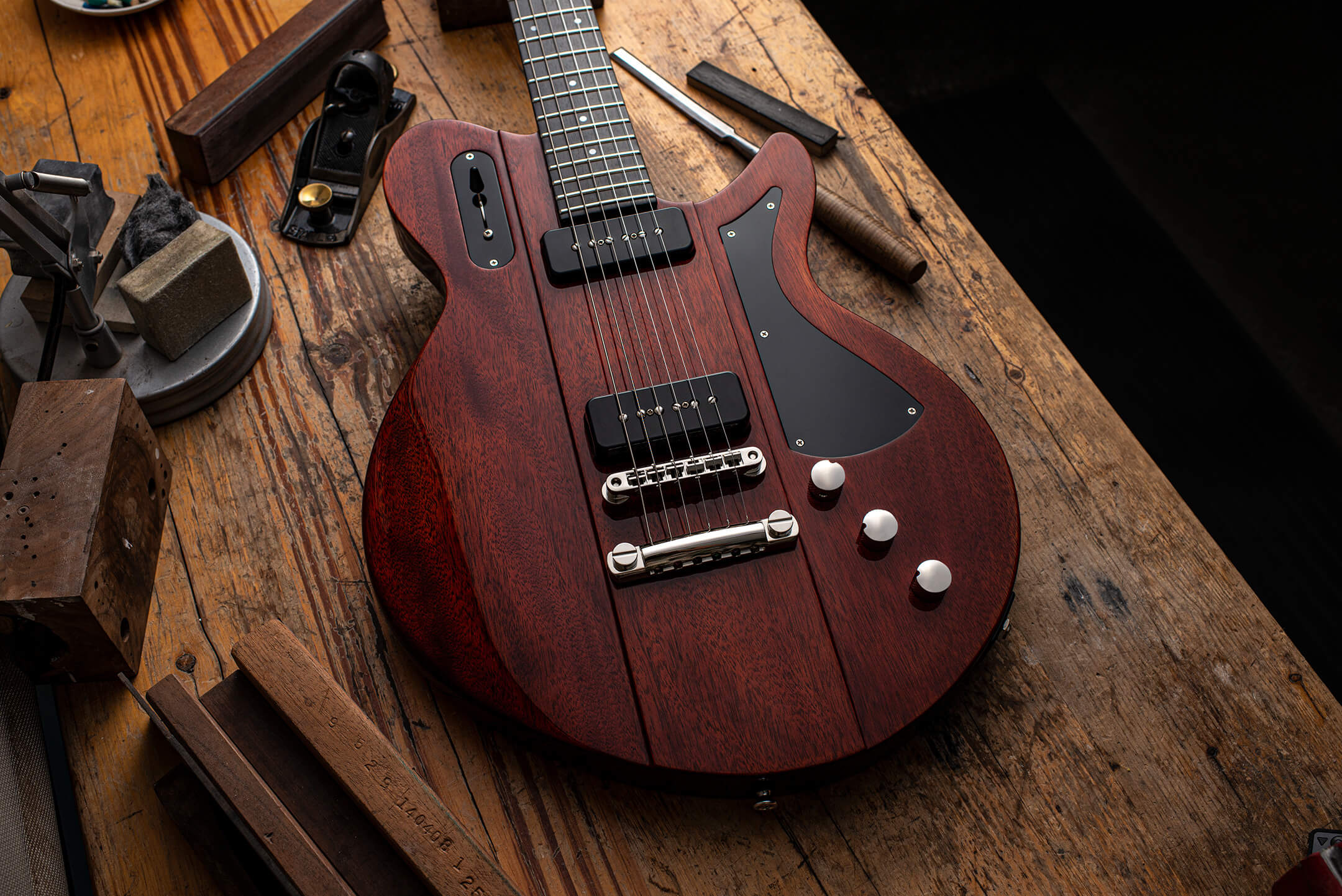 “My role in that whole designing process is often to lay down the ground rules, so there are some! So, Otto doesn’t leave the park and just comes back with this space-ship guitar design. So, you give him those ground rules, and then he is at the top of his game because he can really come up with something.”

“I say this a lot as a designer, I work best if there’s structure and rules,” Otto agrees. 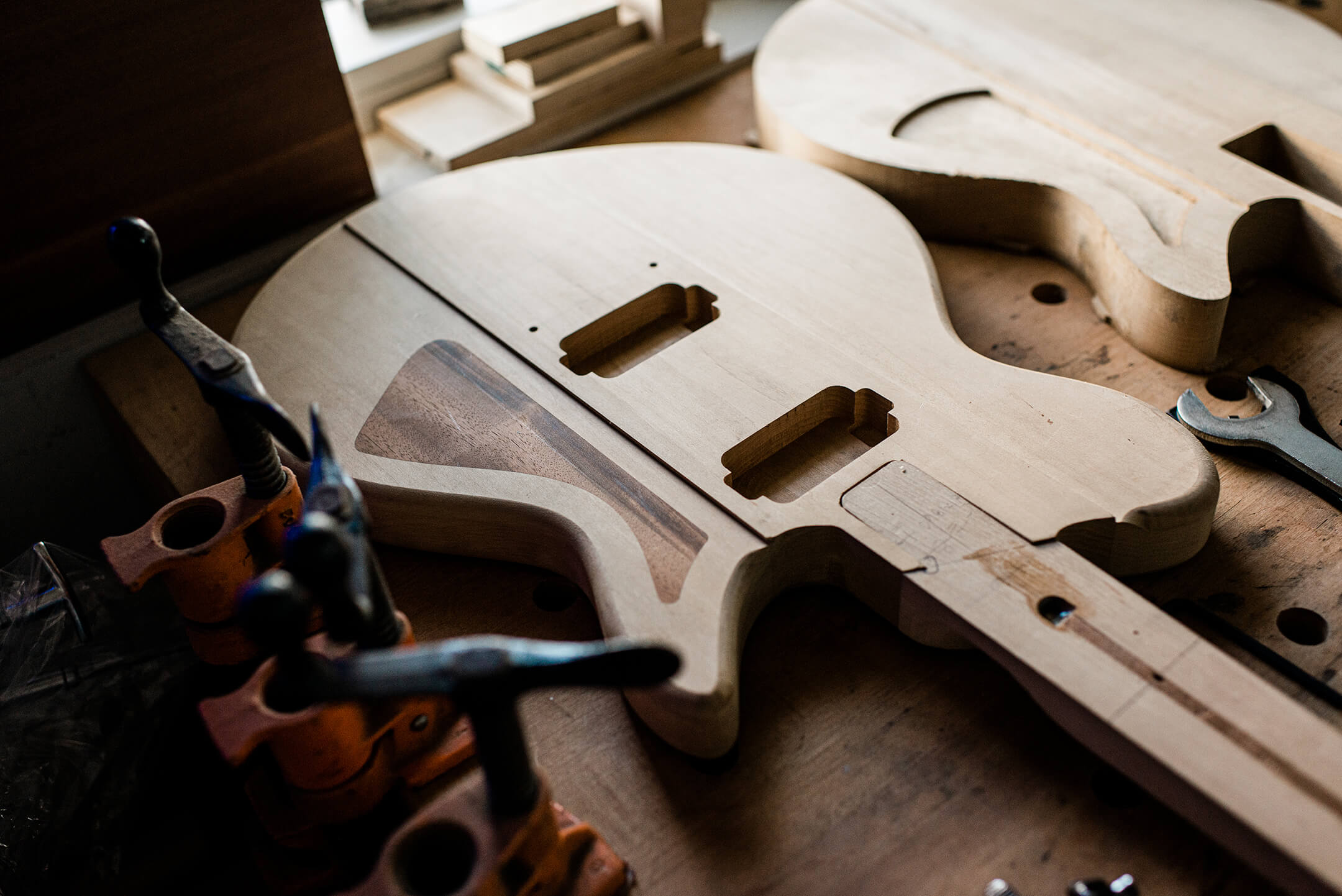 Guitar design can be a long and laborious process that requires a huge amount of back and forth before you find something that everyone is happy with… or in some very rare cases, the opposite happens.

“What’s funny, and is something that’s so unique,” Pepijn chuckles. “We did that walk around NAMM on the Sunday, and the next day when I went to [Eastman’s] Pomona office to work, Otto was not there. Then on Tuesday, he comes in and he has the guitar! He had the body cut out of styrofoam!” 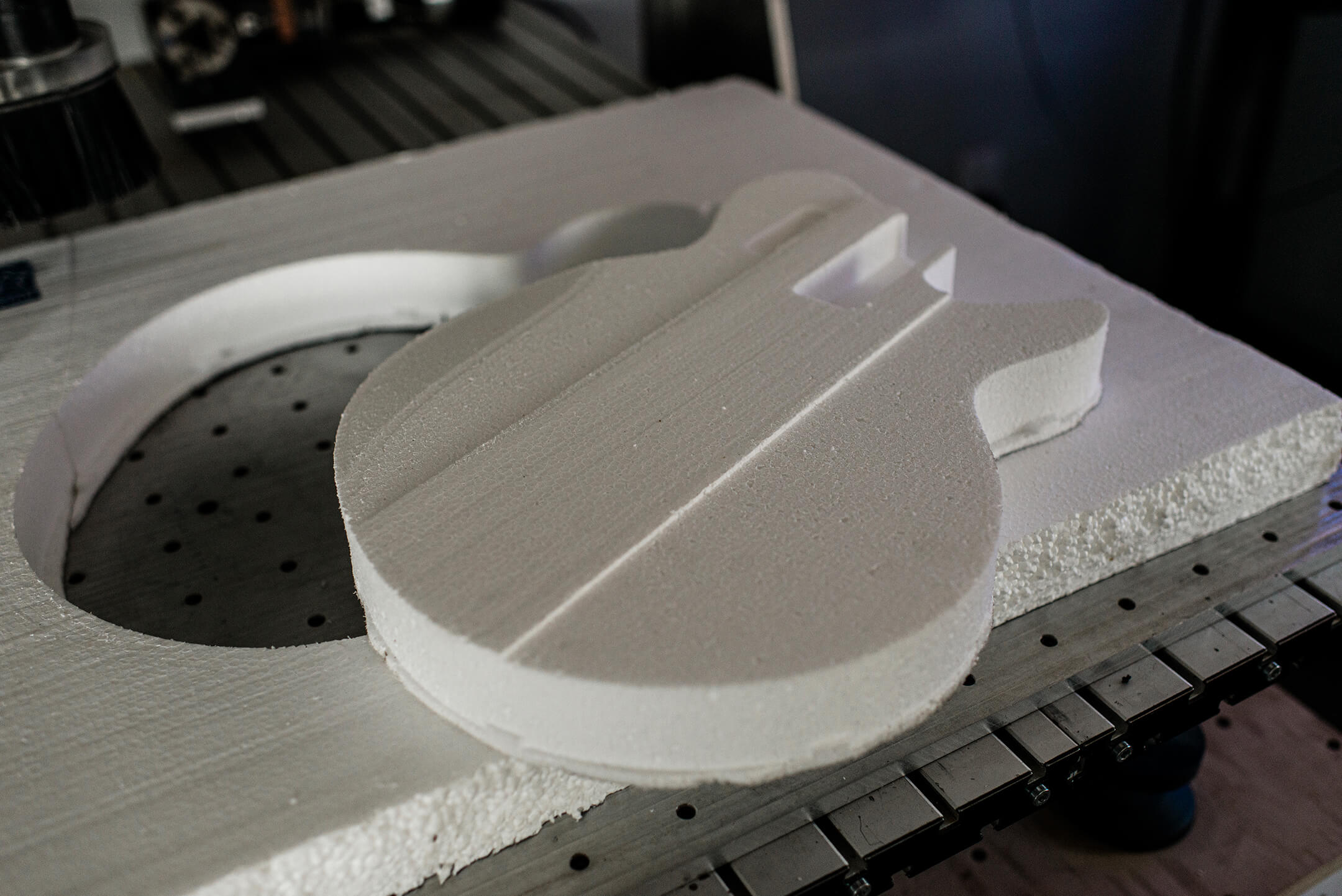 “That Sunday evening we walked around, and I took notes,” Otto says, modestly. “And those rules established what I did on that Monday – sitting at home, drawing and sketching, figuring out what the entire body shape would look like. And it was built off of the Romeo – it’s effectively a slightly smaller version of the Romeo that is pulled to make it an offset and then the body contours are put in there. And it can happen really fast if all the information’s there. And that’s exactly what happened.”

From there, the process went into overdrive, with Pepijn and Otto working together to refine the DNA of the Juliet further.

“Once you have something, you can look at it, you can put pickups on it,” Pepijn explains. “I remember trying out all the different places for knobs, because that’s my part of the job – the knobs, the pickups, thinking of colours, and I was drawing pickguards and headstocks and all sorts of weird stuff. And within three days, the basic essentials of this guitar were laid down.” 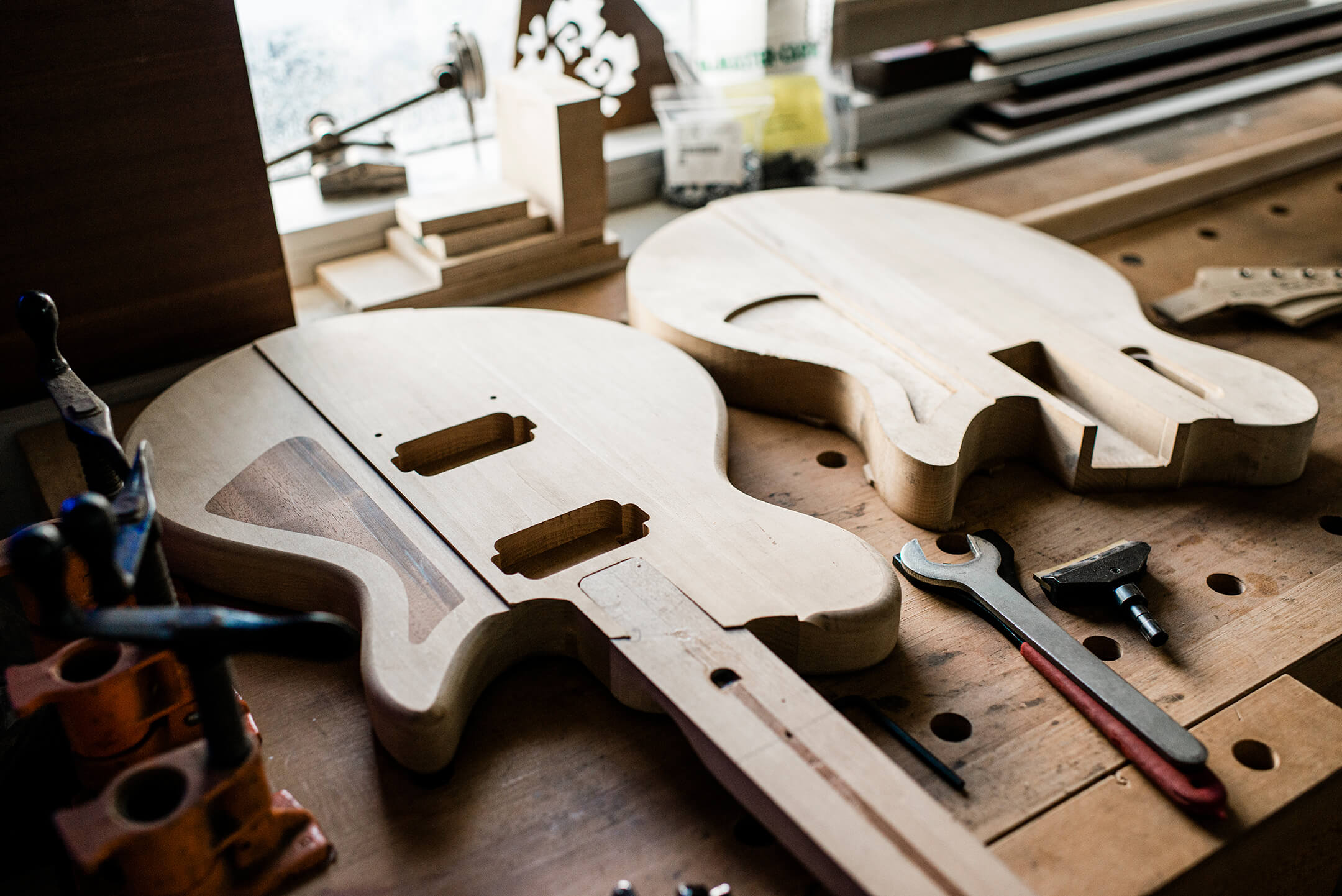 One of the most striking aspects of the Juliet’s design is the headstock – not only the first six-in-a-line headstock the company has ever produced, but a unique stepped shape that nods to boutique while also being its own thing.

“Headstocks are extremely tricky to do,” Otto admits. But I think the best thing about the Juliet headstock is that it looks like it’s always been there.”

“The original ugly, pencil drawing of the headstock, that’s mine!” Pepijn interjects. “But that’s what makes Otto one of the great modern American guitar designers. He takes my very rudimental drawing, and when he hands it back it’s this beautiful, elegant thing.”

“What Pepijn does extremely well, is not only does he set up the ground rules for these projects, but he’s also able to finish them,” Otto chimes back. “I mean, he can talk about how I’m so good at the design and the proportions and ergonomics. – that’s all great and well. But there’s a certain point where I have an off switch and I’ll just click off, and I’ll be done with a project, where Pepijn will say, ‘No! We have to finish it! We have to!’” 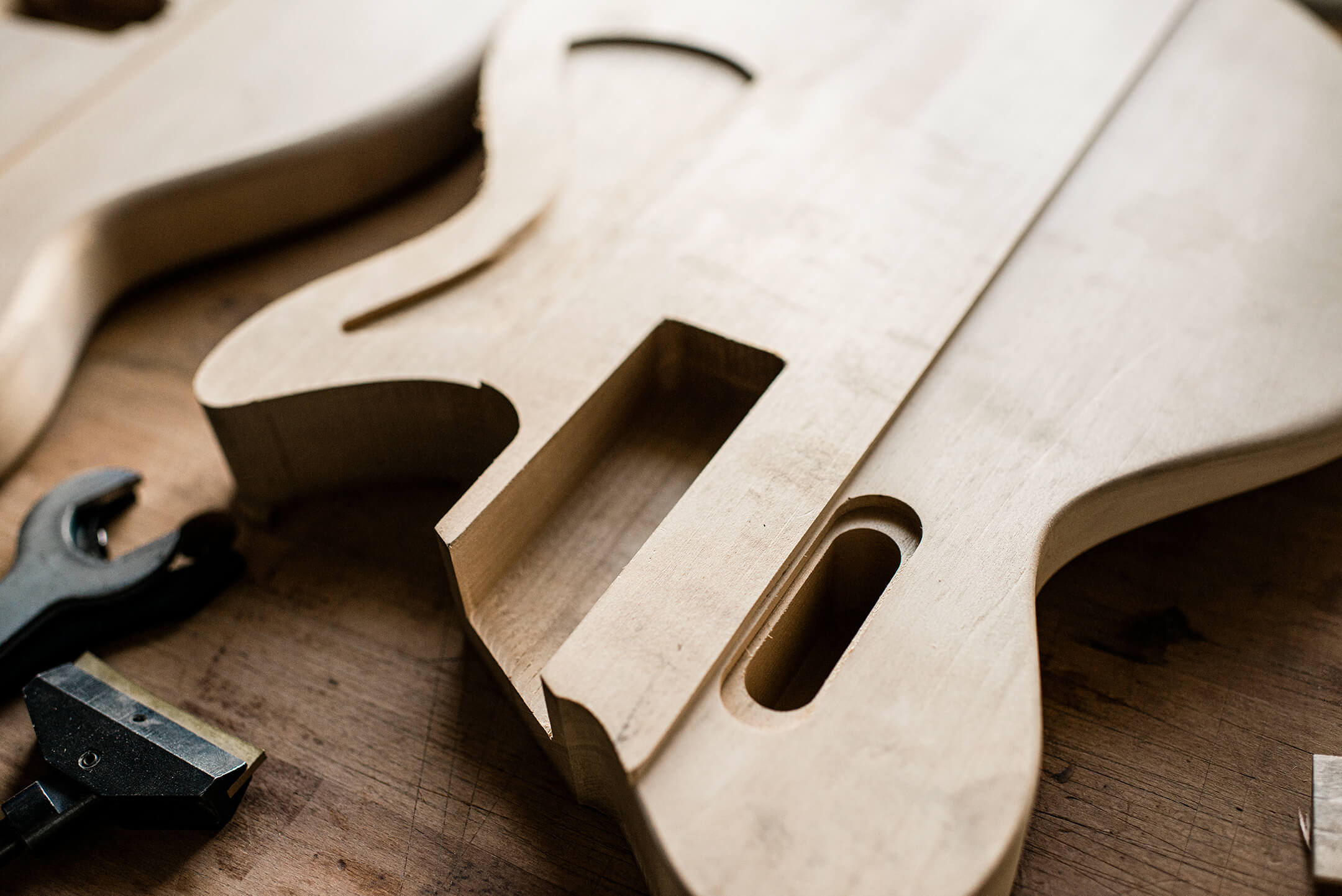 As it turned out, the time they had to finish the project was a lot more than they anticipated – with the world locking down shortly after the pair had worked on the design in California, the world locked down, with Pepijn heading home to the Netherlands, Otto back in the US and the company’s luthiers in China, the team had no choice but to devote their time to refining and improving the Juliets design in a fashion they wouldn’t have otherwise been able to.

“We were actually also fortunate in a way that the horrible situation in the world with Covid meant that there was no NAMM!” Pepijn reflects. “That gave us more time than we normally have so we could also take away any original mistakes we made in the beginning.
“For example, first we had a five-way switch with single-coil settings on the humbuckers. But once Otto finished the first prototype and sent it over to me here in Holland and I played it, the single coil sounds had such a drop in volume that you couldn’t use it! Originally we had two knobs and a five-way switch, but after that we switched to a three-way switch and added an extra volume knob, and then all of a sudden, visually, that made it!” 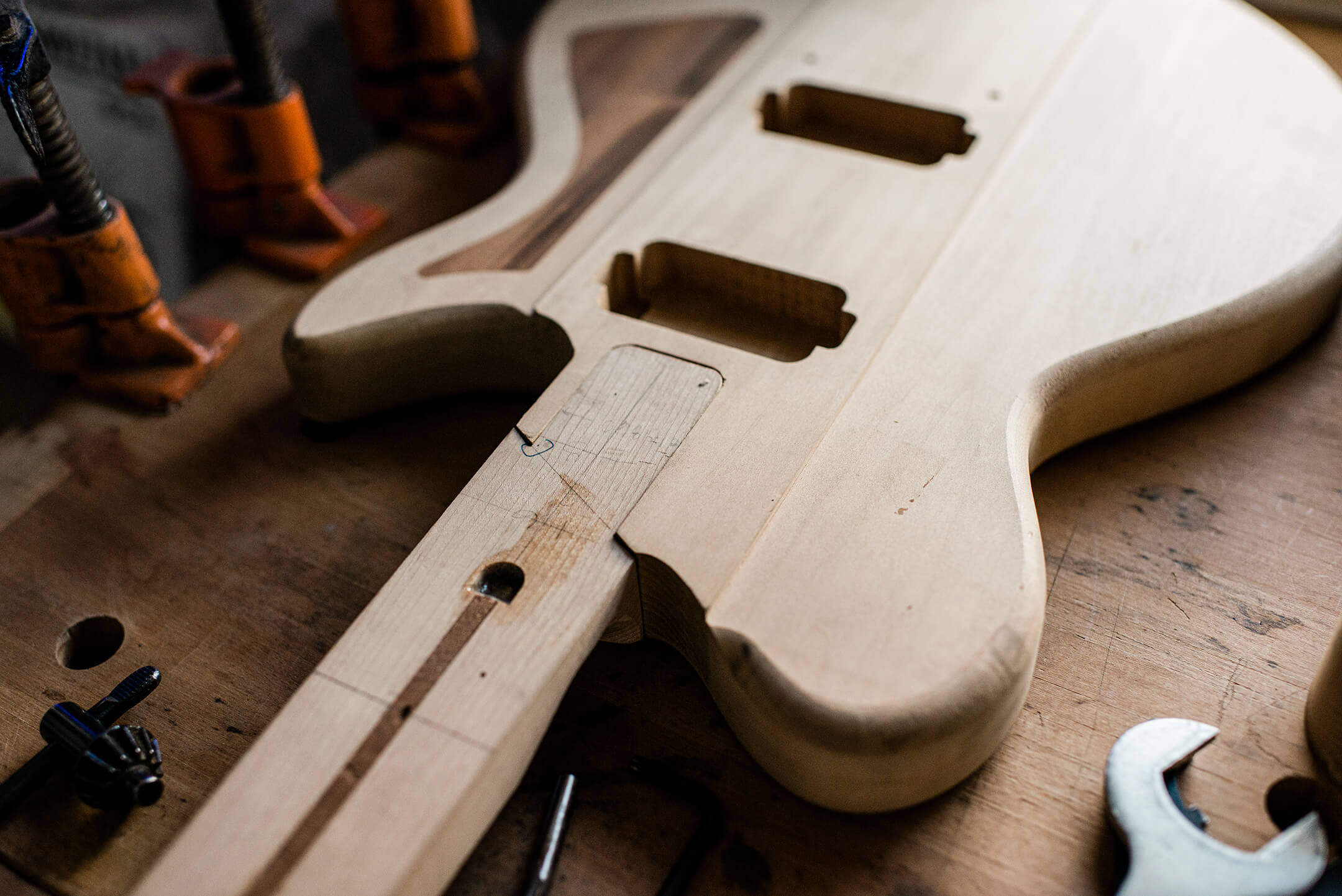 The end is the beginning

What’s abundantly clear speaking to Pepijn and Otto about the Juliet is that like the Romeo before it, this is just the start of what they envision for the future of the model, and of Eastman’s dive into creating its own design language for original electric guitars.

“The Romeo was perhaps the scariest project we ever did,” Pepijn admits. “Because it was the first time that we ventured into making an electric guitar like this, and it turned out to be the best selling guitar we had in 2020! That gave us the confidence to build on that.
With the Juliet, there are so many possibilities from here – you could put a carved top on this, you could do a bolt-on neck… all sorts, all based on a new platform of solidbody that is genuinely Eastman.” 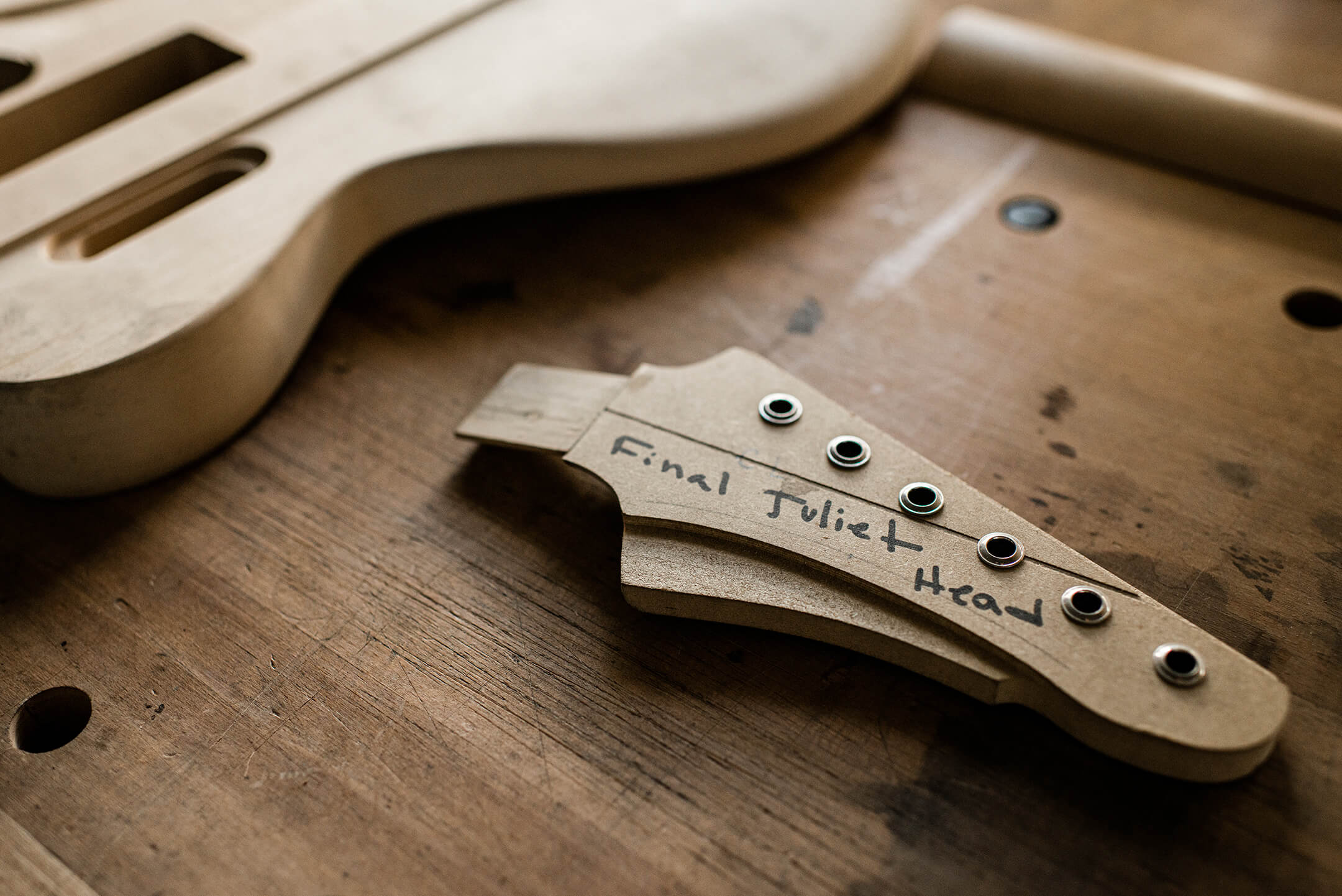 “We’re also finding out what it means to be uniquely Eastman, y’know?” Otto adds. “That’s all the way down to the wiring schematics, because we do something very untraditional for wiring. It’s neck shapes, because we’ve found out what really feels like an Eastman neck. And this headstock is now something that I feel is uniquely Eastman.

“And all of that is starting to win over the electric market also – it’s great when all of these things come together. Maybe we’ll become one of those companies that, when you’re in a smokey bar you see the silhouette of a Juliet , you’ll go, ‘Oh that’s an Eastman!’”
It’s clear that Pepijn and Otto are overflowing with pride at the Juliet, and are hugely excited to share it with the world – so much so that they decided to do something they’d never really done before, approaching rising US rockers Robert Jon & The Wreck to be the first artists to get to grips with the Juliet. After using them for a rehearsal, guitarists Robert Jon Burrison and Henry James played them that night at a show in LA, and then promptly decamped for three months on tour in Europe with the guitars in tow. It’s an endorsement that validates everything the pair believed about the Juliet. 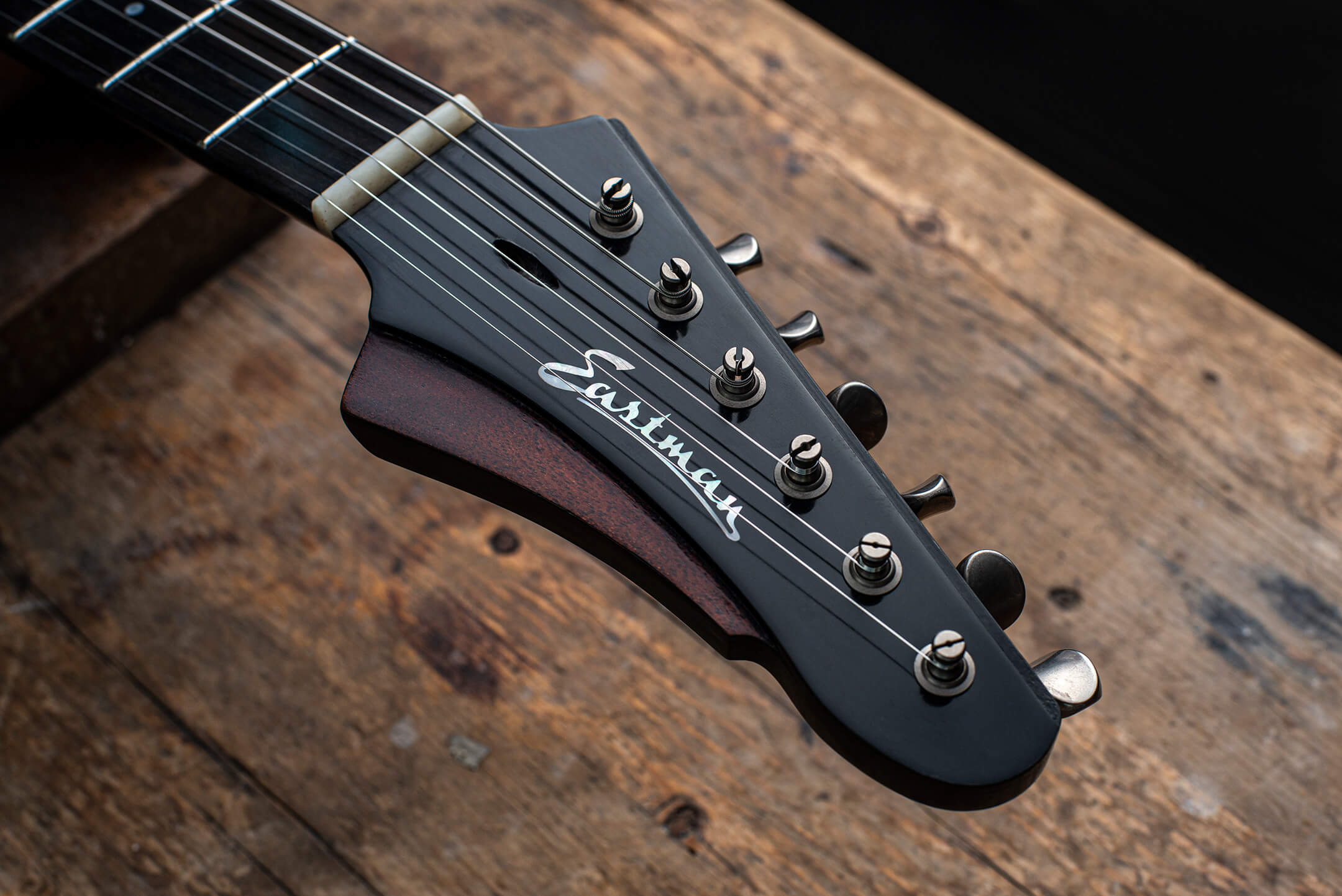 “Because of Robert Jon and the Wreck, I’m less anxious about launching the guitar,” Pepijn explains. “There was no obligation for them to play it. They could’ve said, ‘Fuck me, this is an ugly guitar!’ y’know? But for them to pick it up, to play it, to love it, is wonderful. And they’re posting all kinds of pictures with the guitar, but no one knows what it is yet!

“We hope we’ve written a hit record, but at the same time, we’re in the most conservative industry in the world. The best selling guitars have been the same guitars for the past 60 or 70 years are, and if you do anything different, it’s gonna be hard. But that’s why it’s so exciting that these guitarists – these southern rockers from California – are not only picking up these guitars, and loving them, but playing them night after night. They’re the hardest working band in show business and the guitars are doing the job! That’s what we set out to achieve, and they’re doing it.”

The Juliet is expected to be available in September 2022. Find out more at eastmanguitars.com.