“I’d sleep with my guitars. You can derive comfort and solace from an instrument”: Ernie Isley

The guitarist on how he found the electric guitar, watching Hendrix practise while doing his homework, and how his guitar turned That Lady from “black and white to Technicolor”. 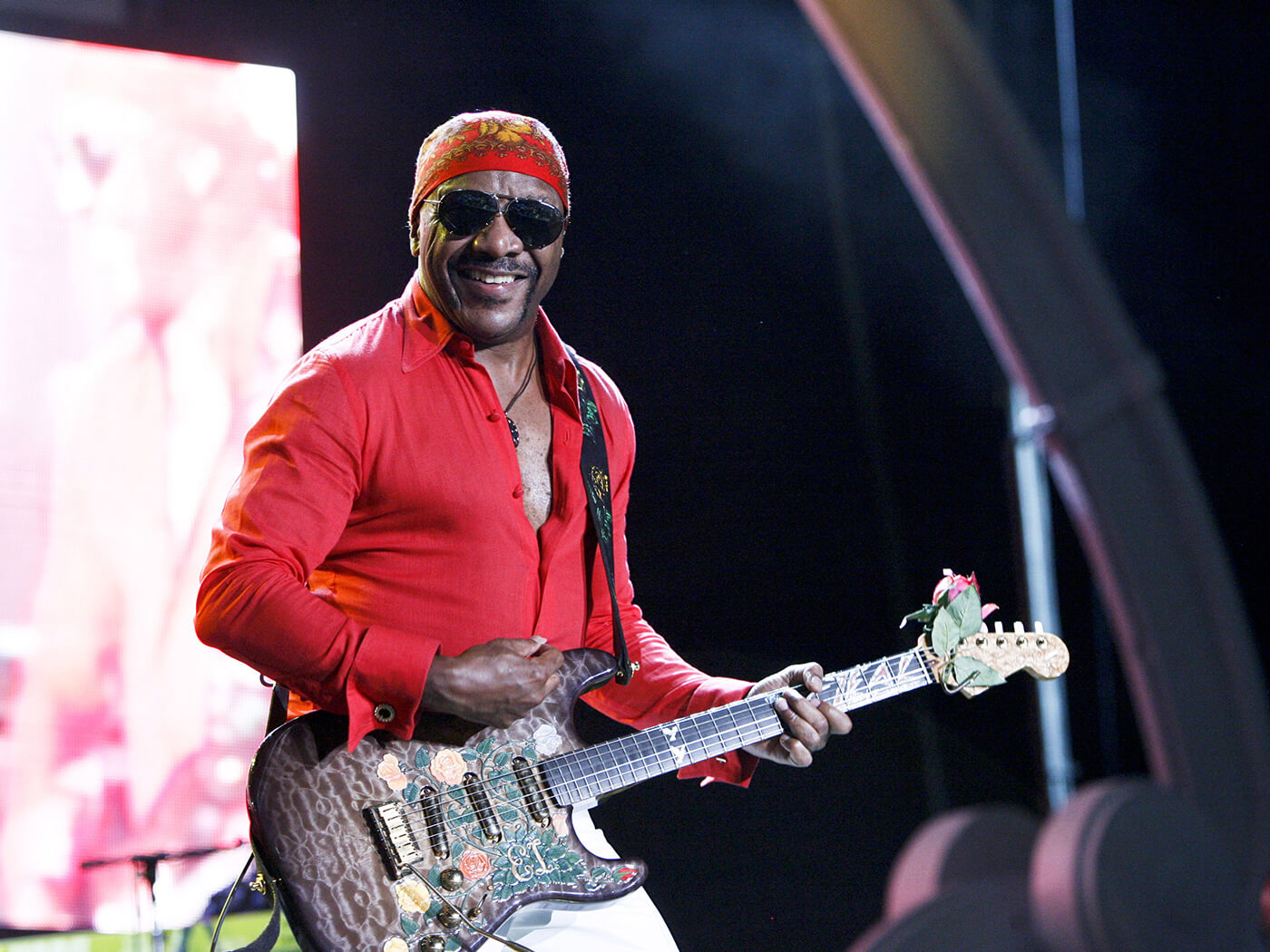 The history of pop music is littered with famous musical families – from the Jacksons and the Osmonds to the Gibbs and the Wilsons – but the Isleys are something altogether different, both in terms of their diversity and longevity. The Isley Brothers first started out all the way back in 1954, and in the more than six decades since have woven themselves into the fabric of pop music, inhabiting a variety of genres and styles over the years.

Indeed, were it not for the small matter of a global pandemic, the Isley Brothers – now consisting of singer Ronald and guitarist and multi-instrumentalist Ernie – would have made their way to UK shores this month, 66 years after the band was formed.

While it’s a shame that UK fans won’t be able to hear the Isleys perform Shout, Twist And Shout, This Old Heart Of Mine or It’s Your Thing for a while at least, there’s still plenty to chat about when we catch up with the 68-year-old Ernie – after all, since he stepped off the drum riser in 1968 to play bass before switching over to guitar, he’s made quite a mark on popular music.

With Ernie in the line-up, the Brothers began leaning heavily on his emotive, soulful guitar style, becoming one of the first acts to infuse rock guitar into the R&B sound, creating a funky, psychedelic-soul juggernaut. It’s hard to imagine Prince’s guitar style being quite the same if Isley had not come before him, but how did he first develop the fuzzy, sustain-drenched sound that would come to be a hallmark of that era and beyond? “We were working with the same engineers Stevie Wonder was using on what would become Innervisions,” Ernie begins. “We were working on the record that became 3+3. There was a fuzz box and a phase shifter by Maestro, and that was pretty much it. We took it from there. It was fun.”

Of course, Isley is perhaps not the most notable guitarist to have cut his teeth in the family band – one James Marshall Hendrix famously joined the band in the mid-60s before he’d go on to become the most important guitarist in the history of rock music, but Ernie fondly remembers the time he spent with Jimi before he transformed into an otherworldly guitar god.

“I met him when I was 11 years old,” he chuckles. “I was always doing homework, or reading when Jimi was practising in our house, but in reality, I was observing him maybe subconsciously. In addition to his unbelievable talent Jimi was a really gentle spirit. Both Ronald and Kelly [O’Kelley, the eldest Isley sibling] were feeling Jimi was someone they could trust so that’s why he was hired.

“As he didn’t have a place to stay, he lived in a spare bedroom in our home. Jimi was the only guy in the band to do that, ever. He was not charged for rent or any of the meals he ate. Our minds were blown by his playing and his calmness. Plus my brothers got him his first Fender so his mind was blown, too! And so it just so happened that the Isleys had this super-duper guitarist in their lineup.”

Watching a bona-fide guitar genius practise in his house must have been pretty inspirational, but as the youngest Isley sibling it seems like Ernie was always destined to join his brothers on stage – performing got its hooks in him when he was still a kid.

“The most exciting thing was to go to a venue filled with strangers, the lights would go down then my three brothers would come out. And they’d take the roof off the place,” Ernie fondly recalls.

After a stint playing drums with Martha & The Vandellas, Ernie would finally step off the stool and join his brothers in the family business, but initially it was four strings not six – something that Ernie would rectify as soon as he could.

“My first Isley record was playing bass on It’s Your Thing in 1968,” Ernie explains. “I was 16. I think I got my first guitar about two months before that session. Then about five years went by and I came up with That Lady… and it was an adventure, a journey of discovery all the way. And it still is – we’re still chasing the music to this day.”

Despite living with the greatest guitar player who ever lived in his spare room as a kid, it surprisingly wasn’t Hendrix that first inspired Ernie to pick up the guitar, but José Feliciano.
“Jose is unreal in terms of talent,” Ernie enthuses. “The fact that he covered the Doors and put his own style and signature on Light My Fire captivated me. That was the song that made me want to get a guitar. The song sounds as good now as it did then. The thing about playing guitar is that anyone can start playing one. It’s quite versatile an instrument. It’s up to you. I never would’ve suspected I’d be a guitarist as it wasn’t the first place I went to instrumentally. But it turned out that I started having fun on it and it went from there.”

That Lady Pts 1&2 would become one of the Isleys’ signature songs, and one of the band’s most famous and beloved songs. It had originally been recorded as That Lady back in 1964, but nearly a decade later the band decided to go back into the studio to put a fresh spin on it, and that’s where Ernie’s rock-infused chops would really come to the fore.

“With that song, we had a funky track to start off with,” he recalls. “But once I put guitar on it, it went from black and white to Technicolour. It was a sense of adventure for us recording that. Throughout our career, we were so different in terms of styles yet we still sound like us. We were not restricted by eras or genres. People really got that it didn’t sound like what was on the radio at the time and they liked It was my senior year of university when it was released and I had an AM/FM radio, and I could go on the AM side and hear That Lady up and down the dial, and then also hear our version of Summer Breeze on the FM side. So the audiences embraced us across different margins.”

The impact on the Isleys on popular music has seen the band received plaudits from all over the map, but clearly there’s something about getting a compliment from a Beatle that sticks. After all, would the Fab Four’s debut album have been the same without Lennon’s throat-destroying take on Twist And Shout?

“I ran into Ringo Starr who is so sweet about the Isleys,” he smiles. “And later Paul McCartney a few years ago. I said, ‘ Paul, you guys are still just wonderful.’ He said, ‘If it weren’t for he Isleys, the Beatles would still be in Liverpool!’ We went onstage together that night. That was the first time the Isleys played with a Beatle on stage. So thrilling.”

Isley’s long love affair with Stratocasters continues to this day with his hugely ornate custom ‘Zeal’ guitars, which are adorned with floral flourishes on the body, and inlaid with a hummingbird, two doves and an inscription with the word ‘Zeal’ on the fretboard.
“Zeal is the spirit, the inner light inside of us,” he explains. “If you have a goal, you rely on that inner drive, that burning desire to get there. Anyway, I have three of them. They are from the Fender Custom Shop, and I think they are the best-looking instruments! I told them what I wanted, and they could’ve looked cartoonish if not done correctly – but they look great. I’ve played them a lot over the years and they really reflect me – also, I wanted my guitars to be seen from way back in the venues!”

There’s a famous legend in the music business that Ernie used to actually sleep with his guitars in his arms from time, we ask if it’s just exaggeration or is there some truth in it?
“It’s true! I’d sleep with my guitars, and it’s perfectly natural to me,” he reveals “I consider my guitars as female. Like a woman, if you touch guitars in the right way, they respond and things are harmonious. So for me, there is comfort in my guitars. You can derive comfort and solace from an instrument.”