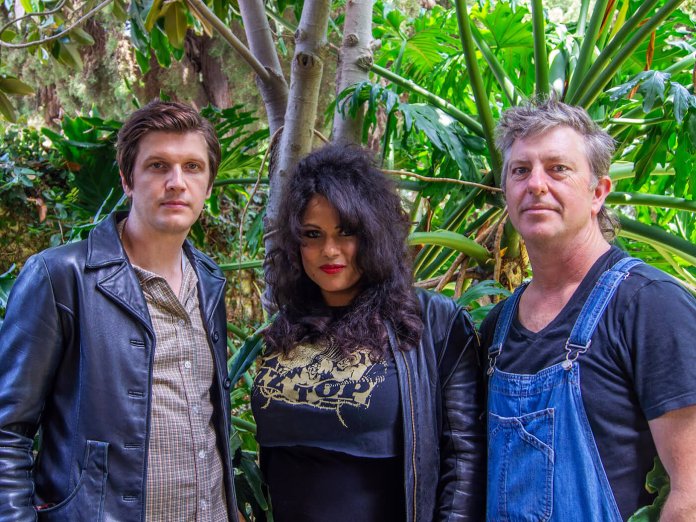 Los Angeles-based trio Ether Feather rises from the ashes of Sand, the brainchild of drummer and vocalist Dylan Ryan. In Sand, Ryan realised his sonic vision of blending an array of genres, from jazz to creative rock. After two impressive albums, Sky Bleached (2013) and Circa (2014), the band embraced a stylistic shift, which gave life to a new incarnation of the trio, which became known as Ether Feather.

Retaining the impeccable chops of Tim Young – who’s also lead guitarist in the house band for The Late Late Show with James Corden – the band released a new EP, Other Memory, which saw the trio venture into stoner/psychedelic rock territory. Fine-tuning their sound over a couple of tours with acts like Cursive and Minus The Bear, and hiring multi-hyphenate bassist Sylvia Black, Ether Feather tracked their debut album, Devil – Shadowless – Hand, released late last year.

Speaking to Guitar.com, Young tells us about the band’s less-than-conventional journey, his personal influences, and his favourite gear.

What first drew you to playing guitar?

My grandmother, Peggy, gave me my first guitar when I was five. I was already playing guitar before I had a chance to be drawn to it!

You’ve cited various influences from Black Sabbath to Kyuss to the Mahavishnu Orchestra. Can you tell us more about where your influences stem from and how they impact your work?

[Jimi] Hendrix is huge for me. He has all the elements I love. Other influences include Ron Ashton, Mick Ronson, Adrian Belew, Marc Ribot – players who specialise facets of Hendrix.

You’re also a seasoned session musician, having worked on the Late Late Show and alongside Todd Rundgren and Fiona Apple. Can you tell us more about those experiences?

Don’t forget Neil Diamond, Cher, Lady Gaga, Josh Groban, Cyndi Lauper, Alicia Keys and many more! The takeaway for me has been that great artists are present, listening and curious. Doesn’t matter their status.

How does that experience come to the fore in Ether Feather?

We all bring our “A game” to our work; we’re present, listening and curious. Therefore we make world-class music.

Devil – Shadowless – Hand is Ether Feather’s debut album. Why was it the right time to release your debut full length?

It’s important to let one’s work unfold organically, and I believe the timing for this release reflects that.

You worked with engineer Andrew Murdock on the LP. How did he help develop the record?

We had done two instrumental/jazz albums with Andrew under the name Sand, and as we were recording the third album it became clear that the music was going in a different direction. Andrew encouraged us to follow that path and add vocals. Those sessions were the start of this album. His ability to jump between styles comfortably was huge in allowing us to try things in the studio on songs we hadn’t played live yet.

What guitars were used on the album and how does that setup transfer to your current live rig?

I primarily used the guitar I’m most excited about, a Novo Serus J, along with my trusty ’64 Gibson SG and Andrew’s seemingly endless cache of ESP guitars. We used his Bogner and Randall amps. Maybe my Fender Princeton. Live I use an Orange Rockerverb 100, a 4×12 and my SG.

What does the future hold for Ether Feather?

Right now we’re playing shows in and around LA and working on another album.