How headphone amps and channelling Def Leppard led to the creation of the DC power trio’s new album, It’s Real. 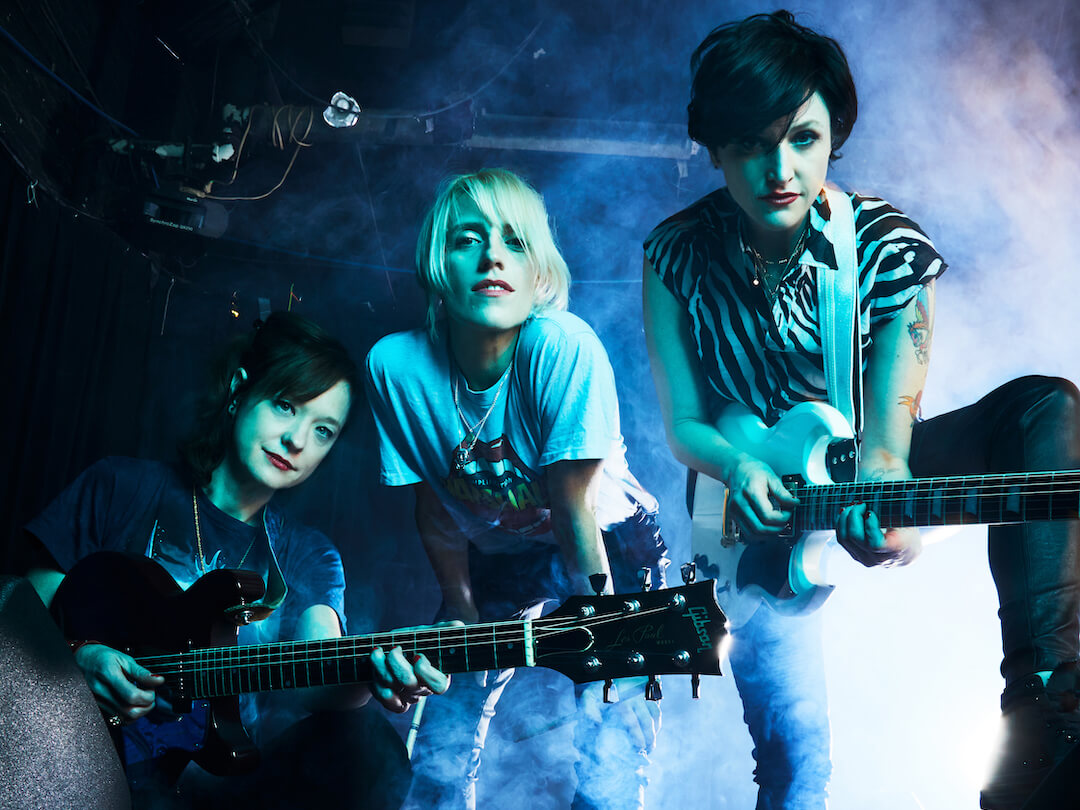 As time rolls on, perspectives change. Back in the mid-80s, the view at almost every level of rock’s pyramid – from the cheap seats to label boardrooms – was that bigger equalled better. Before Seattle’s nascent grunge scene started having its say, the excesses of the road were matched dollar for dollar in studio costs, as bands sought to create records that sounded like the future.

When Washington DC power-trio Ex Hex reconvened to record the follow up to their searing 2014 debut Rips, they slipped into this mindset. “We wanted to open up the sound from the first record, which sounded pretty garagey,” guitarist and vocalist Mary Timony says. “Even in how it was mixed – really overly compressed. We wanted to take it back from being blown out and use really diverse guitar sounds, make it lusher and bigger. We were talking a lot about Mutt Lange.”

Specifically, they talked about Lange’s work on Hysteria, Def Leppard’s 1987 monster hit and one of the most fastidiously overproduced albums of all time. Given the dirt under Rips’ fingernails, and Timony’s rep as a classically trained guitarist who favoured difficult, mathy melodies during her time with Helium and Autoclave, on paper ‘Ex Hex x Def Leppard’ is a weird look. But It’s Real drops that perception with its first couple of punches – this is a muscular, furiously enjoyable record that mainlines brazen riff worship.

With Betsy Wright, who played bass and sang on Rips, stepping up to spar with Timony as a second guitarist and drummer Laura Harris keeping a tight rein on things, behind its day-glo exterior lurks a shared set of blueprints that ensured Ex Hex hit their marks. “It was super collaborative,” Timony says. “If something could be played better by someone else, we’d do that. The parts just became parts.”

Both guitarists took time away from Ex Hex before settling in to write It’s Real. While Timony toured around some Helium reissues, Wright issued an LP with her side project Bat Fangs that set out some signposts for what would follow. Its sound – righteous power chords, Gibson SGs and cranked Orange amps – bleeds into her writing here, bouncing off Timony’s more studied, punk-leaning work.

“I’ve been getting more into 80s metal,” Wright says. “I got really inspired by a lot of guitar players and tried to stretch my ability a little bit by learning a lot of solos – Randy Rhoads, Angus Young, a lot of the songwriting on the solo Ozzy stuff.”

But getting your Mutt Lange on in the studio is expensive and time-consuming. Ex Hex didn’t have an 80s budget for their 80s ambitions, so they had to improvise. Producer Jonah Takagi, who also helmed Rips, provided the meticulousness, while the LP was tracked at several locations, including sessions with engineer Ben Green at Ivakota in DC and in Baltimore with post-hardcore hero J Robbins at his Magpie Cage studio. During their stay in Maryland, that improvisation was facilitated with a room of amps mic’d up at all times, while helping hands also came from the nearby Big Crunch.

The amp studio, which is owned and operated by Brooks Harlan and Shawna Potter of the hardcore band War On Women, loaned Ex Hex one of their Screaming Baby combos to use in tandem with Timony and Wright’s Orange Rockerverb 50s for the face-melting leads on the single Rainbow Shiner – perhaps the LP’s best example of their tandem attack. “Song by song we would just see,” Timony says. “There was a lot of experimenting and a lot of really small amps.”

None, though, were smaller than the Rockman – the notorious Walkman-sized, battery-powered headphone amp designed by Boston guitarist Tom Scholz in 1982. Famously, this relic was heavily used on Hysteria once Lange and Def Leppard had decided to eschew traditional amplifiers in favour of layer upon layer of tracks.

“It seemed appropriate for some of the lead sounds and we read that during Hysteria a lot of the guitar leads were tracked through that, so we got excited,” Timony says. “But it’s over the edge of that style. We tried using it and were like, ‘This is a little too smooth sounding’. It made it onto the record in at least three different places – it just has that sound, a bit of chorus and distortion. It’s 1988.”

The gang’s all here

If Rips was defined by Timony’s P-90-loaded Les Paul Special, then It’s Real is a more crowded affair. Wright’s SG and Flying V were regularly in the mix, while Timony reached back into her past and dug out a 1989 PRS Standard 24 that she picked up while studying jazz guitar in college.

One of Mary’s most cherished guitars ended up sacrificing itself for her art, with her beautiful Duo Glide, built for her by the Portland guitar manufacturer Saul Koll, dying a nasty death during the sessions. “We used that a lot until I broke the headstock off,” she says. “Tragedy.”

As they learned how to work as a two-guitar unit, Fenders were also allowed to darken Ex Hex’s door for the first time. Along with an ancient 12-string model borrowed from a friend of a friend, they introduced a Telecaster and Jazzmaster to the mix, reuniting Timony with the guitar she leaned so heavily on in the 90s. Wright has also crossed the rubicon, and on the road she has largely ditched the Gibsons in favour of a Stratocaster.

“A Gibson is a more full sound, I really like playing SGs,” Wright says. “But when we were getting ready to play these songs live, we both plugged in our Orange amps and a couple of Gibsons and it sounded crazy. So I’ve been playing the Strat through the Rockerverb 50, and I play the Flying V on two songs.”

Timony and Wright are an achingly cool duo who have riffs and hooks to spare, and on It’s Real, Ex Hex have hit on a formula that works perfectly for them. “We started with: ‘What songs do we have?’ and went with whoever had ideas – it was pretty natural,” Timony says. “There wasn’t a lot of figuring it out.”

It’s Real is out now through Merge Records.