“I kind of hate my guitars”: Ezra Furman on strangling her six-strings and searching for community

The US guitarist and songwriter talks Pete Townshend, searching for solidarity and finding hope on her most recent album All Of Us Flames.

Ezra Furman only needs a few words to transport you somewhere. Staring into her phone from a beige-all-over hotel room, she remembers the early creative process for her recent album All Of Us Flames, coming to on a roadside somewhere in Massachusetts. “The car turned into a little sanctuary for me, at the wheel of my Chevy shrine,” she says.

In the first uncertain moments of the pandemic, Furman would drive out from Boston to isolated spots, chosen almost at random, and write. Her past two records, 2018’s Transangelic Exodus and the following year’s Twelve Nudes, had a narrative fixation on cars and the open road, twisting decades of American rock ’n’ roll into new shapes. On those fabulous LPs she crafted winding narratives of fear and escape, with four wheels and a windscreen safeguarding queer love, warding off creeping Christian fascism and maybe buying a few quick breaths of freedom.

In relation to All Of Us Flames, though, the car belongs in the real world. It was a tool for Furman the writer rather than Furman the protagonist – the songs she assembled in the Chevy shrine weren’t always about running, they were about finding your place or working to see it realised.

Closing her loose album trilogy, she came to a gradual stop and focused on ideas of community and how her own story, as a Jewish person, a trans woman and a mother, might speak to the experiences of generations who have been denied that ideal. “It’s not written in your Bibles,” she sings on opener Train Comes Through. “It’s a verse behind the verse, only visible to an obsessive detail-oriented heathen Jew.”

“There’s still some flight here but I think the earlier writing about escape and the ‘we gotta get the hell out of here’ kind of feeling was always pointing toward community and interdependence,” Furman says. “The Transangelic Exodus record, none of those escape stories made sense without the other person – they always involved the angel. I think, unconsciously, it had something to do with needing a guardian angel. I guess once you’ve had a guardian angel, you want to be one for someone else, and you want a network of angels protecting each other.”

Community is more than a word though. Furman is at pains to point out that it doesn’t just happen. All Of Us Flames makes plain the fact that she isn’t settling down. Instead, she’s standing her ground and seeking answers to questions that have plagued her about what it means to be there for someone else. Songs such as the simmering, glamorous Lilac and Black are based around calls to arms that don’t skip the jeopardy element of a call to arms – rather than retreat behind community as an empty label, Furman emphasises the need for solidarity to extend beyond a phrase. 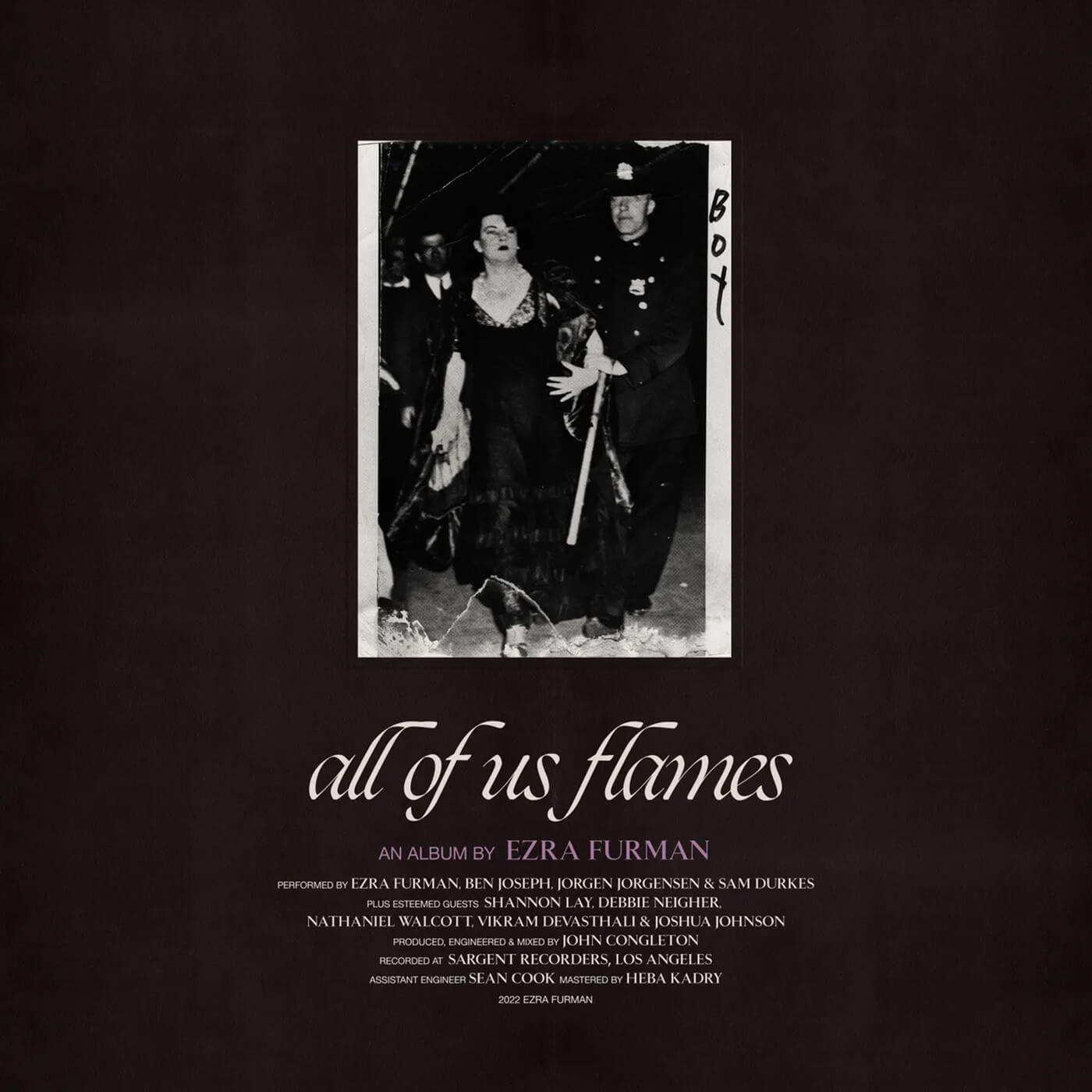 “I moved to Boston shortly before writing this record and had some troubles with transphobia and a hostile landlord, and the local queers showed up for me,” she says. “A lot of things that are called communities are not really communities. People are talking about the queer community, the trans community, these are not really communities. You can make a community within that. It’s like an invitation to community. Actual community is people who are taking care of each other, and who have each other’s backs. I just started to be like, ‘We can’t just assume there’s a community here’. I feel the same about the Jewish community. Like, are we actually showing up for each other?”

This feeling feeds into an element of All Of Us Flames that was in short supply on Transangelic Exodus and Twelve Nudes: hope. Furman’s music is defiant, from its writing to its performance, but here there’s the suggestion that her defiance might one day outlast the MAGA chuds and the hierarchical capitalist structures that keep us in place.

“The dream that the empire would fall, that’s a big thread,” she says. “It comes from Judaism. It’s a bit messianic, the whole thing. On The Train Comes Through, it’s just like messianic prophets, like Isaiah. I do have a bit of a split mind about that, because the danger would be that you think you don’t have to do anything, that something’s just going to come save you. But I think the risk of that is small, and it’s worth it just to know, in your bones, that injustice is not a permanent fact. It’s not like ‘that’s the way it’s always been, that’s the way it always will be’. I think it’s a great sin to say that the broken world is as it’s supposed to be.”

Something else that sets All Of Us Flames apart from its predecessors is the presence of an outside producer, a genuine rarity in Furman’s world. The task fell to John Congleton, a veteran of recent records by Sharon Van Etten and Death Cab for Cutie, who mixed Twelve Nudes. Stepping up to shepherd these songs, he found a locked-in live band inspired by trust and familiarity and a bandleader ready to loosen her grip on proceedings for the first time, indulging in collaboration more freely than ever before. “I felt like I had written the hell out of the songs,” Furman says. “I felt really confident in the songs surviving no matter what you did to them.”

And they did survive. The record is full of the sort of weirdo shit that Congleton has made his name on – assorted clicks, whirrs and textural experiments that don’t dull the melodic edges of Furman’s compositions. Recording was initially fast and live, with an open-ended approach to overdubs. Furman describes the openness going both ways, with Congleton’s outside perspective allowing the band to zero in on the fundamental coolness of her songs while finding common ground in out-there choices that other artists have stopped short of embracing.

“He’s just very good at saying yes to what sounds good,” she says. “We used this thing on maybe three-quarters of the songs called a Panoptigon. It’s like a record player with a keyboard on it. You put these floppy disks on, they’re recordings but you can play the sounds at different notes. I don’t understand how it works but it makes a very otherworldly noise. He’s like, ‘Nobody ever wants to use this but I always suggest it’. And then we were like, ‘We’re gonna use this on everything’.”

In the spirit of going with things when they felt like they were working, Furman got into the habit of just grabbing the nearest guitar while tracking. She doesn’t even remember what they were, doubling down on the belief that her intensive work on the songs during writing allowed her to relinquish control in the studio. “I was like, ‘Just hand me a guitar – that one looks good. Let’s start.’ That was a liberating approach, to just not worry about anything,” she says.

Live, Furman has long paired a late 1980s Telecaster with a Hanson Chicagoan semi-hollow that stepped into the breach when her favoured Italia Mondial bit the dust. She retains a healthy amount of gear skepticism, which has been a part of her creative outlook since her teens – the song always comes first.

“I started out writing songs kind of not wanting to form a band when I was younger, because I was like, ‘Everybody just gets some cool guitar pedal and they forget that their job is to make a good song’. I was all about writing,” she says. “I was studying literature at university. I wanted to be a writer and it was just one way for me to write. I didn’t know it was just going to be the way. But I started out with a lot of suspicion of people who care about what guitar they play or what pedals they’re using.”

The nuanced relationship between artist and instrument was also consistently underlined by one of Furman’s early musical influences: the Who’s guitar-destroyer-in-chief Pete Townshend. In the mangled wreckage he left behind during the band’s imperial phase, Furman saw someone whose frustration at the limitations of the guitar mirrored her own. It’s a feeling that hasn’t left her.

“He has a story about the first time he smashed a guitar,” she says. “He was like, ‘I’m always just trying to strangle it. It’s not doing enough. I want it to be more violent than it can be.’ He was jerking it around like, ‘Come on! Make the sound that I feel.’ Even though he’s such a guitar hero, I think he hates his guitars in a way. I kind of hate my guitars. It’s like this process of coming right up to the edge of what can be done with them or can be said with them, and then wanting to throttle them.”

Ezra Furman’s All Of Us Flames is out now on Bella Union.