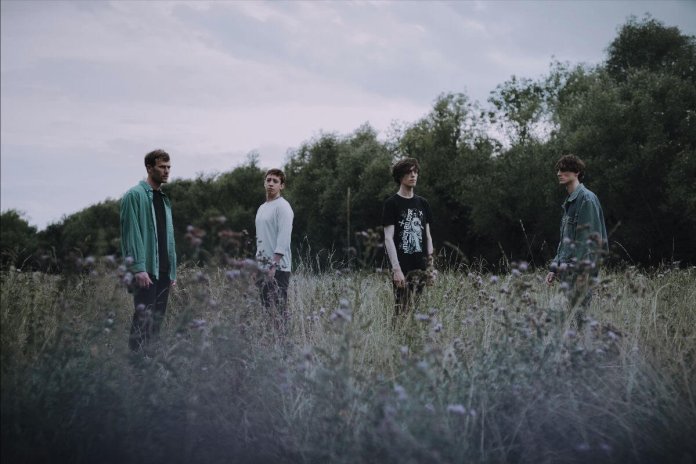 Usually a guitar-driven band, they responded enthusiastically to the request of producer and old friend Jack Steadman (Bombay Bicycle Club, Mr. Jukes) to refocus their energy on melody and layering tracks, moving away from the fuzzed-out guitar work of their previous long-players.

Steadman’s influence reigns supreme on their third album, adding a certain sparkle to proceedings, not to mention an upped level of musicianship that sees the band refine their sonic palette through alternate guitar tunings – one sees guitarist and co-producer John Victor tune every string to A – using amp simulators and writing separately before developing their workings as a collective.

With Nathan Boddy (Nilufer Yanya, Shame, James Blake) also on-board for mixing duties, the album is both intimate and abrasive, firmly placing the band as one of the most impressive and intriguing guitar bands in the industry.

We spoke to John Victor about his guitar highlights from Sanctuary…

“This is the first record we’ve done where guitar wasn’t the focal instrument 90 per cent of the time. The band made a decision to write on pianos and use synths instead of guitar leads. I think we were going for a Flaming Lips Soft Bulletin thing and wanted to see what happened. Atlas Please originally had a load of lead guitar in the chorus, sort of an early Foals kind of thing, but Jack (Steadman, producer) was really not into it, and he was right.

“So instead I had to focus on creating atmospheres throughout the track, playing with delay and modulation and interesting chord voicings. At the end we wanted a guitar break but I wasn’t allowed to do my usual blown out fuzz thing. I think it helped me focus on the actual notes being played. I still wanted some dissonance to add tension so used a major 2nd in a high register. I was happy with the results and it was challenging to be pushed to do something different. Fuzz is still way more fun, then you don’t even have to play guitar!”

“This is a lot of tracks of me playing. We were going for a very produced, looped feel on this one, and I think it came out really well. The band and Jack kept pushing me to come up with new ideas for each section. A lot of the synth sounds are highly processed guitar, a lot of octave, filter and trem effects going on. Live it’s become a bit of a different beast, a lot rawer. I hope it’s as fun for people to watch as it is intense for me to play four guitar lines at once.”

“This was the first time we’d written parts for songs separately which took me a while to get used to, but I was really happy with all the little bits I got on to this track. There’s a My Bloody Valentine-ish octave part in the pre-chorus and there’s a lot of guitar tracks in the final chorus going through every fuzz pedal I own. When it came to the solo I was trying to take the piss with how ‘rock’ I could make it but it turned out really well – better than when I sit for ages trying to show off my non-existent jazz knowledge. I think the solo was a DIY Shin-Ei fuzz clone going into a Brass Master clone, so a lot of analogue octave up going on but it’s all getting squished by a breaking up Mesa amp. I was really happy with the sound on that one.”

“We tracked this song live and we had Jack Steadman playing acoustic with us. He’s an amazing musician and such a great player, his timing and tone were spot on and really made me want to raise my game overall. Was a real honour to get to play guitar with him.”

“This was the first time I used amp sims, out of necessity and Jack’s preference. I was very impressed by the Yamaha THR10 practice amp and every guitar track on Anime is going through that little thing. It allowed me to write all the lead parts in a tiny room at my mum’s house on Boxing Day, originally as scratch tracks, but the sound quality was good enough so we used it for the record. The guitar was in a very weird tuning, I think almost every string tuned to A over multiple octaves and the G and B strings as unison A. What can I say, I love Sonic Youth. I’ll have to work out a way to play that live in standard! The end section originally had this outrageous Smashing Pumpkins-influenced guitar solo that got cut by the band (again, they were right) but live it’s going to be very hard for them to turn me down so come to one of our shows. I can promise lots of fuzzed-out, blown-out guitar.”

Sanctuary is out now on Transgressive.