From more electronic sounds to instrumental “crossover”, the band tell us about their studio experiments with producer Dan Carey. 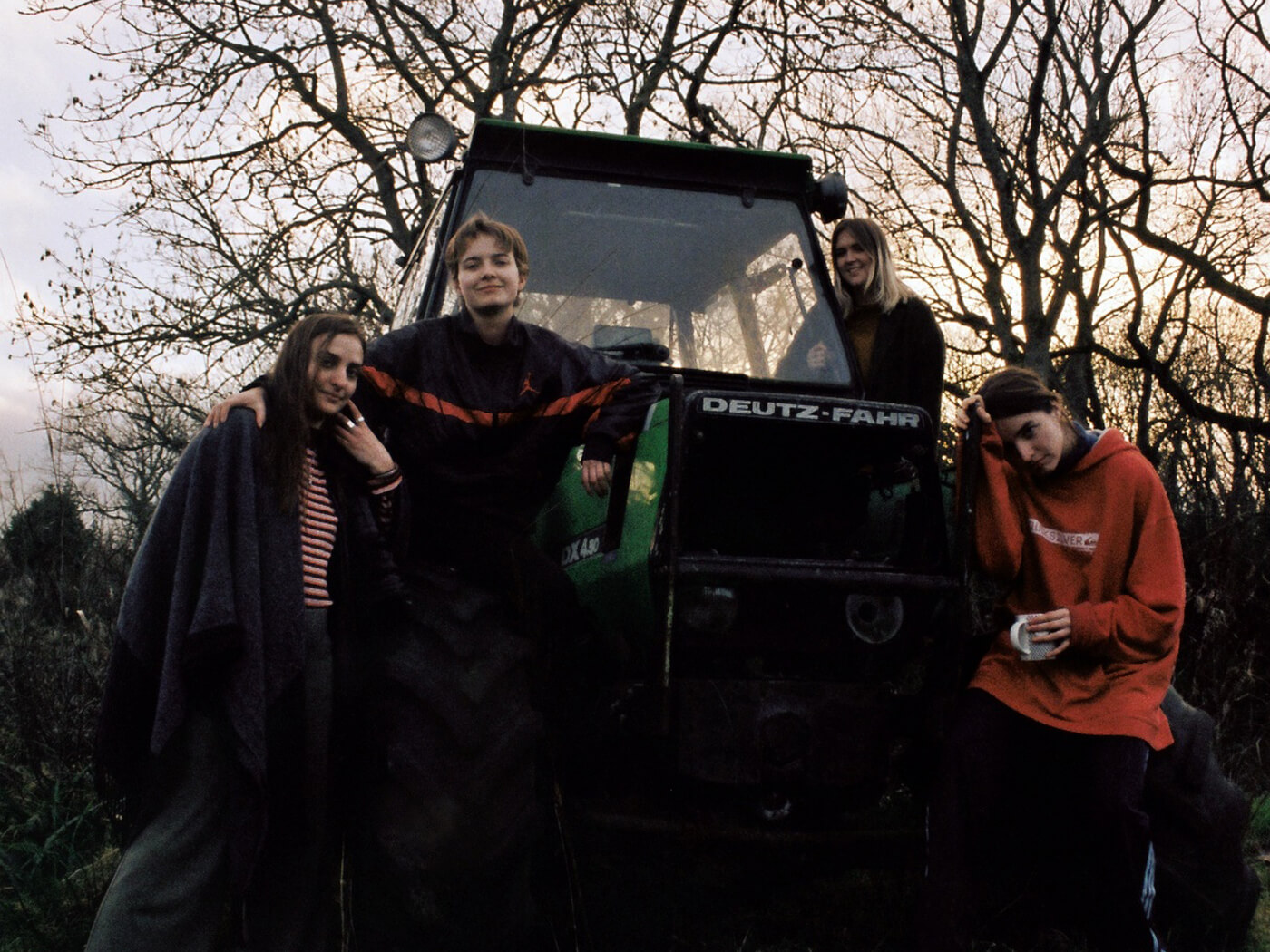 Goat Girl can’t be easily pinned down. The South London band’s self-assured eponymous debut, which was released on Rough Trade in 2018, trades in coolly menacing post-punk, but also invites country instrumentation and grungy distortion into the fold.

But Goat Girl don’t seem interested in defying genre categorisations; in fact, they simply don’t seem interested in the very concept of genre at all. In conversation with guitarist/vocalist Lottie, bassist Holly, guitarist Ellie and drummer Rosy (they go by their first names when they aren’t answering to stage names like ‘Clottie Cream’ and ‘Rosy Bones’), one gets the sense that Goat Girl see all sounds as material to manipulate, all instruments as tools to tinker – or play – with.

When Guitar.com first caught up with Goat Girl in November, the band had just finished recording their sophomore album. It’s their second album produced by Dan Carey, who runs the label Speedy Wunderground and is as likely to work with rising talents like Black Midi and Fontaines D.C. as big names like Franz Ferdinand and La Roux.

Rather than dwell on well-trodden topics – like their whirlwind signing to Rough Trade, or their strong association with the Windmill, the Brixton venue where they honed their live chops – Guitar.com opted to probe the band about the new music they have in store. Read on for an edited and condensed version of two conversations with Goat Girl, one over the phone and the other in person at Singapore’s Alex Blake Charlie Sessions music festival in December 2019.

Was the recording process for the new album similar to that of Goat Girl?

Holly: It was very different. The last one was very live and raw, in terms of how we approached the recording. And this album was done to drum machine, so everything was very considered and precise, especially for our drummer, Rosy. And it was a lot more complicated and had a lot more going on with synthesisers and custom percussion. But because we tracked it live, it still went very quickly.

Was making the album this way a deliberate choice on the whole band’s part?

Ellie: A bit. I think it had to be that way to some extent, because of all the electronic elements that we wanted. It had to be precise with timing. Like, arpeggiators had to work.

What gear and instruments were you using for this new record?

Holly: I play a Squire Precision Classic Vibe Bass. And I don’t use many pedals. But we used a Korg minilogue to write a lot of the songs, which is what we started working with that opened us up to a lot more new sounds, making it sound a lot more electronic.

Ellie: Guitars, electronic drums, and live drums as well. We also used a Moog One for the recording. It’s massive, like a spaceship.

What was using drum machines like for you, Rosy?

Rosy: The first album was more free and staying in time wasn’t as important. But for this one we wanted it to be more controlled because there’s a lot going on. So practising with it was quite different, but I also did feel quite natural, because Dan [Carey], the producer, made these drum loops and we’d practise with it and change the time signatures and the tempos for each section of the song if needed… Then we added a lot of other stuff on top as well, and we did percussion loops as well. So it sounded like a sample.

Were there any artists or albums that inspired the move to experiment with drum machines and a more electronic sound?

Lottie: I dunno. We have been listening to more stuff on the side of electronic music recently. Like one of my personal favourites being Metronomy’s first album Pip Paine, where it uses weird samples and those songs where he uses his voice to create sounds. So I think maybe that probably inspired it, but I don’t know if that’s saying we necessarily want to replicate something like that. You listen to it and it gets stuck in our mind in an unconscious way.

Holly: I’ve been listening to Battles. I watched them recently, but I don’t think it was a conscious thing, in the studio. Like, “do this thing like this band”. It was more in terms of – we were very conscious of like, not picking up maracas and playing it like you should play it. I think we were quite determined to find sounds out of the box and find sounds that were not meant to be played, to make it sound like how no one else would sound like.

Goat Girl have gigged a lot. But does your dynamic change when you’re all in the studio together and trying to put down parts and tracks?

Ellie: Yeah, sometimes it’s pretty hard. Especially for this album, because it’s been so collaborative. It’s taken longer and with more consideration. One of the songs that we wrote, Greyhound, began as an idea that Holly had written on bass and keyboard, and then I really liked it, so I wrote a vocal melody to it. That song has basically changed so much, it’s been through four or five different forms to get to where it is now, which is obviously quite a lot of work that went into it.

Holly: I feel like we make a point of being together, going and having cups of tea and drinks and stuff. It gives some relief from intensely concentrating on stuff all the time. We’re lucky to have a place where we can work at our own pace.

Besides each other and your producer Dan Carey, are there any people you look to for guidance for or people you bounce ideas off?

Holly: I think it really maybe has been just Dan for this album. We wanted to make sure that we were ready to start recording, basically. We’d been stuck in a place where we’d been working on these songs for so long, that we’d kind of lost sight [of where we were]. We needed someone else’s perspective to come in and give us some guidance or reassurance, some kind of new eyes or ears on what we were doing. Dan is more than a producer, really, to us. He’s a friend. I knew him before I joined Goat Girl, as well… So he came over to the practice space, and just told us that, “Oh yeah, what you’re doing is really good”. We became more serious about recording at that point. My boyfriend also recorded some demos for us. He doesn’t really give feedback, though.

Ellie: Yeah, I think Holly’s boyfriend recording the demos helped us get from a place where it’s just ideas in a room to songs that were going to be finished. And it’s also really useful to have those demos because we could see the songs – from looking in on them to being in the room playing them. It can be really hard to know when something’s good.

And I think with Dan as well, a big thing was doing the album and just having the deadline that we could work towards. I think we needed that push. We got to the point with this record – because we care about it so much – that we just began to overthink things. With a lot of artists, I think it’s very common that they never release their art to the world because they’re too precious, and they want it to be as good as it can be. But I think it was very good to have that deadline, to have it finished, basically.

I know it’s a little hard to talk about the new album since no one’s heard it yet, but are there any songs that stand out to both of you?

Holly: I like them all. I don’t know what the final title of the songs are gonna be, but there’s one with the working title of Jazz – it’s not going to be called that – it’s one of the interludes, more of an instrumental-type track which has a really good, thick groove, and chords as well. I was playing drums on that originally. That one’s quite fun, but to be honest, all the bass parts on the new album are pretty fun to play.

Ellie: I really like my guitar part on the end of that song as well. Sad Cowboy, which again, won’t be called that, is also really fun to play. It’s got a really cool outro where we play almost a solo – in the sense that every band member joins in at a different point, so there’s a shift to what everyone is doing, individually, which I think is quite cool.

Does that mirror your songwriting process in that everyone’s got something to contribute and jumps in when they do?

Holly: In that song, that does happen, but that’s just because it’s a breakdown. It’s not generally reflective of the songwriting process.

Lottie: I think the songwriting process, more so with this album, has been a lot more collaborative and with a lot more crossovers between instruments. Like the way people write for the instruments: It wouldn’t necessarily be me writing a guitar line because I play guitar. I would be swapping over to something I don’t naturally play and finding a way to play it, like, I dunno, a synth or something. I can’t play the piano but I can find a riff through that, and then translate that to a guitar. You’re approaching an instrument when you don’t know how to play it, so you’d be very free. So you’d be playing something that wouldn’t necessarily come naturally. I could be breaking a very simple rule, but because I don’t know what it is, and it’s interesting to me… There’s a lot of crossover, a lot of people writing lines for lots of different instruments.

Rosy: Yeah, that was one of the fun things about it, just switching around all the time… Sometimes it would get a bit out of hand and we’d need a safe word. I can’t play guitar, but I’d play guitar and fiddle with a pedal, and be like, “It sounds so good!” And they’re like… “No”. (laughter)

While you wait for more details of Goat Girls’ new album, follow their adventures here.