“It’s the most electric I’ve played for a while, I missed guitar solos”: Gruff Rhys on new LP Seeking New Gods

The former Super Furry Animals main man on how it felt to be back at a festival, recording on ley lines in the Mojave Desert and a lifetime of playing upside-down.

Anyone who’s had the pleasure of a conversation with Gruff Rhys will know the former Super Furry Animals bandleader is a man who takes his time. Yet the two-year wait to release and tour his seventh solo album must have tested even his patience. It’s no surprise, then, that when we catch up with Rhys during a string of UK dates, he’s revelling in the opportunity to finally unveil the most electric guitar-centric album of his solo career.

Completed in 2019, before the pandemic, but only released this May, Seeking New Gods is about as niche as concept albums get – nine songs notionally about an active stratovolcano on the border between China and North Korea. Dominated by the sound of Rhys playing his 1974 Gibson ES-335, unleashing several eruptive guitar solos along the way, the scorching live performances were a departure from previous acoustic-led albums such as Babelsberg and American Interior. The live shows have been equally explosive.

“Initially, my solo records were partly a chance to make simple records away from Super Furry Animals, where I mostly played electric,” Rhys explains before a gig at Bristol’s intimate Louisiana venue. “It’s the most electric I’ve played for a while, I missed playing guitar solos and this was a chance to do that again.”

When we sit down with Rhys, he’s two dates into a UK tour that will stretch deep into autumn, surrounding shows in New York and Los Angeles, and by the time we see him a week later, at his spiritual home Green Man festival in the Welsh mountains, any rustiness has been well and truly shaken off. Dressed in immaculate white and wholly in the pocket, his band are simply electrifying.

The highlight of the hour-long set is Rhys’ exultant tumbling EBow solo on the stomping glamp-pop Loan Your Loneliness, executed note-perfect on his 335. The album version, utilising an EarthQuaker Devices Cloven Hoof fuzz and Mu-Tron Bi-Phase, might well be the most thrilling lead guitar performance of Rhys’ whole career. “The solo is totally live,” he explains in his soft, drowsy tones. “I’d spent a few years listening to Michael Rother records, so I played a lot of EBow on this record and a lot of phased sustain and harmonising with synths.”

Part of the reason for Rhys’ decision to ‘go electric’ was the formidable presence of the band he’d been on tour with in 2019. Seeking New Gods was recorded between dates in the US, with former Flaming Lips drummer Kliph Scurlock, pianist Osian Gwynedd, bassist Stephen Black, vocalists Lisa Jên and Mirain Haf Roberts, and brass from Gavin Fitzjohn. Tracked live with few overdubs, everything was knitted together by the eternal presence of a 1970s Solina synth, imagined by Rhys as the sound of “weather systems wrapping around the mountain”.

“Cliff is an amazing rock drummer and it’s a waste playing acoustic guitars around him because you want him at full volume,” says Rhys. “Osian is a former drummer as well. He hammers the keys like drums, it’s very percussive and rich. It meant I was able to play a bit louder, and it’s very enjoyable to be playing electric again.”

Seeking New Gods was initially conceived as a biography of the geological exploits from 2333 BC to the present day of Mount Paektu, but the mountain quickly turned into a metaphor, Rhys using the volcano as a vehicle to write about his own life, “civilisations, and the spaces people inhabit over periods of time”. It also became a melodic West Coast road album as thousands of miles in the tour van were soundtracked by a vast playlist of “intense repetitive electronic and cosmic music”, featuring Laurie Spiegel, Miles Davis, the Grateful Dead, Rhys’ favourite guitarist Michael Rother and, following a stop-off at Paisley Park, “hundreds of hours of Prince”.

After wrapping up the tour in LA, the road-weary party arrived at David Catching’s Rancho De La Luna studio in Joshua Tree. Never a fan of orthodoxy, Rhys chose not to tell his band what the record was about, and booked only three days to record all nine songs – ambitious enough if everything went to plan. It didn’t.

“We’d played all the songs live, we were in good shape,” he recalls, “but the studio didn’t work for the first day, the desk had broken. The engineer, Jon Russo, was really laid back to the point where we were starting to get worried. On the second day, he was just pointing microphones haphazardly, but when we started playing it sounded amazing. We were like, ‘Jon how did you get that sound?’ He said, ‘I’ve got no idea man, it’s just the ley lines’.”

Amazingly, 48 hours was long enough to record the bulk of the album, as the exhausted musicians, the studio’s cramped confines and the hot, dry desert air outside created a surreal dream-like atmosphere.

“The studio is like a house, and one bedroom is the amp room,” says Rhys. “My guitars went through four or five amps, all at a loud level, the drums and piano were in the same room, loads of bleed and most of those takes were live. We were trying to make an album in two days, and we only managed seven songs, but that was pretty good going. It was really intense, it wasn’t like a relaxing holiday in the desert, it was full-on.” 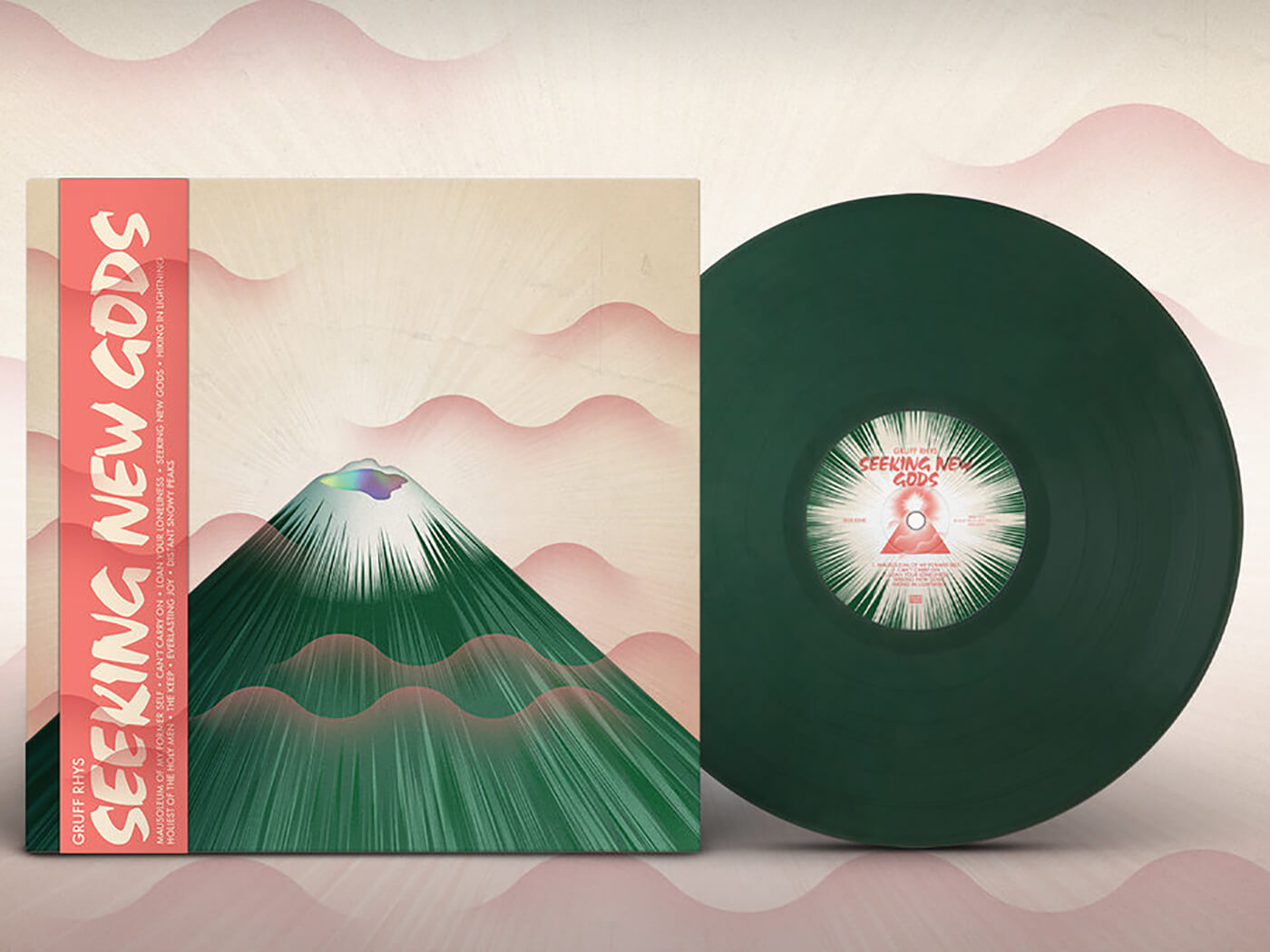 The remainder of the record was recorded at Ali Chant’s Playpen studio in Bristol, where Rhys was surrounded by a stellar collection of guitars and stompboxes. However, despite having access at both studios to a mouth-watering array of vintage gear, Rhys relied almost entirely on two of his own guitars, with a studio Fender Jaguar making a cameo on Hiking In Lightning.

“I’m not a huge gear head, but for the last 10 years I’ve had this 1974 Gibson ES-335,” he says. “It’s been through the mill, totally hammered on tour and it’s still got a beautiful tone which is hard for me to replicate on any other guitar. I also play a Swedish-made Spanish guitar from the 1960s. It was a cheap American catalogue guitar that was made in Sweden, I don’t know the brand. They’re both right-handed guitars.”

A left-handed player who became a guitarist “by accident”, Rhys famously uses right-handed guitars upside down, a technique he adopted as a child growing up in Pembrokeshire. “Both my brother and sister played, so there were always guitars in the house,” he recalls. “My sister played right-handed and my brother played left-handed, so I was always picking up guitars in various states, the right-way round, the wrong-way round, just picking out tunes however they came.

“My ambition was to be a drummer, but that got a bit complicated when I started to write songs. I found that I needed a guitar and I ended up having to sing as well. I came to the guitar through songwriting, just picking out tunes on other people’s guitars.”

Having learnt his first chords on his brother’s Spanish-style acoustic, and played along on a makeshift drumkit fashioned out of buckets when his sibling graduated to a Vox electric, Rhys was forced to innovate when his elder sibling left home to go to college.

“I had to start playing my sister’s guitar and she was a right-handed player, so I started to play her guitar upside down,” he says. “That’s affected the way I play quite a lot because it’s harder to do sevenths and things like that, but it’s good for very open chords and soloing’s alright. I think it’s been a way for me to make some unique sounds.

“I got by using other people’s guitars until I was about 19 and then I bought a Strat copy off a guy in a pub for 50 quid, it came with an amp, so I played that for a few years. I just played whatever was at hand.”

Since picking up his first “proper” left-handed acoustic, a steel-string 1970s Eko on a trip to Cardigan Music Centre several years ago, Rhys has been experimenting again with playing ‘the right way up’ and enjoying the fresh approach it necessitates.

“I ended up buying loads of acoustics and that old Eko, because I don’t know as many chords left-handed, so I thought it would be a good way to simplify my songs because they’re getting a bit complicated. It’s a bit strange, but it’s a good discipline because it means I play three or four chords instead of 10.”

That’s typical of Rhys’ atypical creative process. Since the first Super Furry Animals album, Fuzzy Logic, in 1996, he’s always looked for ways to challenge his existing methods and avoid getting stuck in a repetitious cycle.

“I write a lot in my head, if I’m going for a walk or something,” he says. “They’ve figured out scientifically that the creative process happens when you’re doing another low-level activity, washing the dishes, going for a walk, suddenly you’ve got a full song in your head. Then I’ll go to a guitar or a piano. Quite a lot of Seeking New Gods was written on the piano, which is a nice change, because I mostly write on guitar.”

It’s been a long wait for Gruff Rhys to get to play those Seeking New Gods songs. On stage at Green Man, he’s a force of nature. Directing his crowd with placards demanding “generic festival reaction” and “euphoric roar”, slipping into his native Welsh for Pang!, then faultlessly executing that EBow solo, the experience of hundreds of live gigs over the past 30 years immediately blows away 18 months of inactivity.

“It’s amazing to play with this band,” he enthuses, “to be lucky enough to play with the musicians who played on Seeking New Gods. Some of the songs have come back like muscle memory and some I can’t remember what the hell I did three years ago. Seeking New Gods was one of the most simply recorded records I’ve made, which is probably why it sounds bigger, there’s more space for the sounds. It’s a great record to play live.”

So, after finally getting Seeking New Gods out there into the world, what next for this wonderfully idiosyncratic songwriter? He’s treated us to albums about flamboyant automotive visionary John DeLorean, Italian socialist publisher Giangiacomo Feltrinelli and 18th century explorer John Evans – before his “aborted biography” of an ancient rocky edifice. Is it time for another character study?

“I was trying to move away from biographical records and I got rid of people and managed to write about a mountain instead,” he says with a deep, somnolent laugh. “I’m trying to find new ways of writing and not repeat myself too much. I’ve been recording a lot recently, various bits and bobs for films. It was really hard to do anything in the lockdown and I’m just catching up with recording again and not over-burdening myself with concepts. I’m just enjoying the sounds.”