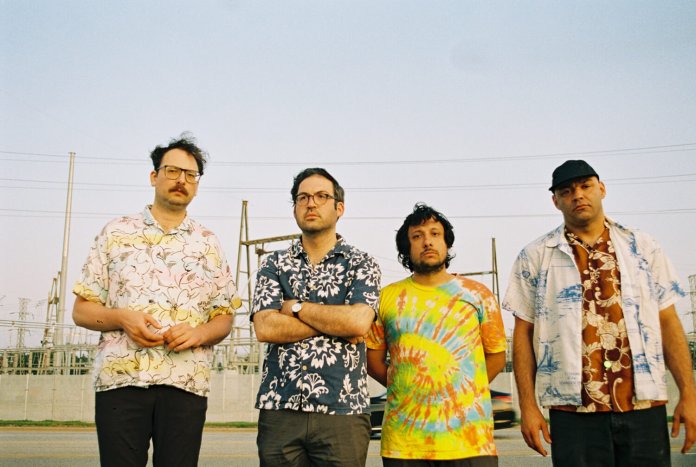 Recorded following an intense three-week tour near the end of 2017, Brian J Sulpizio and his ever-rotating cast of band members – this time featuring guitarist Jake Acosta, drummer Seth Vanek, and bassist Bill Satek – have created a more direct and powerful body of work on their seventh LP.

Much like its predecessors, Shame Engine / Blood Pleasure is very much a product of Sulpizio’s mind. His inner-producer is rampant on this record, whether its the addition of viola of horn sections. What is apparent though is the impact of the new members on the album. “We all have too much to gain by working with as many people as makes musical sense to us, and I really enjoy having Health&Beauty records run a wide musical gamut,” Sulpizio explains of the expansive member base.

Below, Sulpizio and guitar player Jake Acosta talk us through the gear used on Shame Engine / Blood Pleasure, from borrowing old Silvertones and using Fender 5e3 clones, and detail the profound, angry and sometimes cathartic process of recording their new album.

Brian J Sulpizio: “I use a Gibson ES-135 with a P-94 bridge pickup, plugged straight into a clone of a Fender 5e3 Deluxe that is modded in secret ways I don’t want to talk about. I use a pedal board sometimes when I play with other people, but I don’t like to do that with Health&Beauty. I use the volume pot into the dirty, dirty 5e3 as basically a distortion option; low for clean and high for dirty, and if I play softly it will be cleaner than if I play harder.

“This gives the thing such an open sound, ringing highs with varying dynamics through the frequency spectrum from moment to moment… It’s very alive to my ears. I think a lot of Sonny Sharrock, too. I don’t have any jazz training but the breadth of sound you can get just by slightly adjusting your approach with this setup reminds me of jazz.”

Jake Acosta: “We were out on a 30-day tour just before we tracked this record. I didn’t have any gear at the time, so I was using all of our bassist Bill Satek’s gear: a Fender American Standard Strat, a Silvertone 1484, and a pedal board that I used exactly two pedals from. I never used to like Strats and to be honest I’d barely played one before we went on tour because I could never not hear Eric Clapton blues splainin’ away, but to my surprise my playing opened up almost right away. Satek started to call me ‘Claptoid’.

“I suppose in my head ‘Claptoid’ felt more like a mix of Neil Young, Eddie Hazel, Lee Renaldo and maybe Clapton but if he had been abducted before he learned to play. I’d also never had a whammy bar before and at first I went wild with it like an intense new romance, eventually levelling out into this expressive dialect. The whammy bar worked perfect for me since my approach is very physical and somewhat surprisingly, the bar allowed me to get pretty far out harmonically as it could either slide me to a more appropriate zone or take me further out.

“Also, I was obsessed with Satek’s wah pedal on board, it was one of those Cry Baby’s made by the Thomas Organ Company back in the day, I think I kept it on pretty much all tour. When we were recording the tone seemed to work only sometimes, but is definitely all over Saturday Night. One of the main things I like about the Silvertone 1484 it is how it mellows out the shrillness with always having the wah on.

“The one pedal of mine I had to have on the board was the Fulltone OCD. I always have that on with some degree of drive. A nice saturation. Dialled in just right, the dissonant notes wobble nicely, like how fuzz can make frequencies fight, yet the OCD retains that full body clean backbone. I usually have it dialled back pretty far if I’m sticking to rhythm. I like that warm, smooth, rock feel it brings.

“ I also always have a Memory Boy on, I like the ‘vintage channel’ sound it immediately gives, sometimes it’s more cranked than others, nothing too crazy on this record though. Oh and how could I forget – I’m completely dependent on a volume pedal. With this group there seems to be sharp awareness and progression of dynamics, so I need to have the option to pull back quickly, or subtly sprinkle in parts, or even just be able to come down small amounts to get the mix right.”

BS: “The dark energy of this song required us to be very drunk while tracking. This is the second of two takes. I locked into a disagreement with the drummer, Seth, so I am trying to slow him down for the whole thing, make him hit harder and get angry but stay slow. I’m not sure whether it was the drunkenness or the disagreement that made me do all those high bends. The outline of the arrangement was largely the bassist Bill’s influence. Bill projected a calm confidence throughout the recording. I was thinking a lot about Funkadelic’s Maggot Brain while we were doing this, and I think Jake’s big long screeching solo got it there.”

JA: “I rode my bike to the studio the day we recorded this, I remember it was super windy so I got this intense work-out in before the session, and went into it with that certain uninhibited clarity you get post workout. When I listen to this song I’m always really surprised at how reserved I was… I’m normally a much more frenetic, anxious improviser, I tend to find sweet spots by hitting all the notes a bunch and seeing what sticks. But there was something about not only the space in this one but a hypnotic darkness that conjured something much more concrete in me.

“We had only played this a few times before this take. I remember, Seth was really unsure what the feel was supposed to be doing. The only time I used anything on the pedal board other than wah was towards the end of the song, where we’re spiralling into chaos, there’s seemingly nowhere to run, all bets are off, and I think Seth was actually mad. I remember very impulsively stomping on this Strymon phaser, which literally sounds like a vengeful monster being spawned from under almost 9 minutes of rubble. It’s at this point the true demonic identity of the song is fully exposed. I’m not sure I even meant to hit that pedal!”

BS: “We tried recording this once or twice before and didn’t get it. Frank Rosaly was back in Chicago for a little bit in 2018 and he, Andrew Young and I recorded it in my house. I think the problem with past versions was a lack of space in my own guitar playing. We’ve got a live version now with the quartet of Jake, Bill and Seth that does it justice. The music video for this song includes a continuous 2-hour live performance of the outro featuring Bill and Maria Jacobson. We went to Jamdek in Chicago for this to have a quiet space, and I wanted to use the Gibson J-45 there.”

JA: “Clown was one of my favourite challenges on the album. My goal here was to let the beautiful simplicity in Brian’s songwriting carry. My approach to this song was sparkling chord swells with the volume pedal and heavily modulated delay, the hard part though was finding the right colours to add. It can be challenging for me to hold back colourful notes because, harmonically, I’m almost always searching for sevens or nines or sixes or weird flat fifths. But this song really did not feel the same if you strayed far from home. Eventually I used some high nines towards the end, but I still wonder about them. There’s something very traditional goin’ on here, rooted way deep, resolute and uncompromising. A strong sense of How It Used To Be, but now broken, complicated, and hiding from it all. Something about its traditional-ness, its classic form, makes this song really sad for me. I was thinking it would make a solid National Anthem.”

BS: “The drummer Jeff Milam and I played this live, with overdubs from bassist Cooper Crain and Jake. There are two solos which I played live. I think I really hit my stride on those. They’re the right combo of good ideas mixed with flawed execution, and they feel more like adding a new instrument than ‘stepping out.’”

BS: “I was recording my friend Nora Petran for a day at Jamdek in Chicago. She finished up fairly early in the afternoon, so I used the rest of the day to play this song over and over. I used a Gibson J-45 they have there that I think is from the 1970s, which sounds gorgeous. It always has old strings on it and it’s a full, balanced-sounding guitar. The nut is misplaced, so you have to capo at the first fret for intonation, and the neck is thinner and strings are closer-spaced than I’m used to, so it takes me a while to learn to play something on it.

“Sometimes problems like that can help you get out of your head, or they can be distracting to where you get nothing done. This one went the good way! I had a hard time getting my voice to sound the way I wanted, and was focusing a lot on getting the guitar notes to ring with my big hands on that tiny little neck, but when I got home and listened to it I was like ‘Oh that’ll do just fine.’”

Love Can Be Kind

JA: “This is probably my favourite song on the album. It pulls the feels just right – sophisticated but damaged, empathetic but exhausted; a sadness refined into a sensitive cool, entirely bittersweet. It took a really specific vibe to get this one right. I credit the human condition, and every window that let me use it to stare out of over the past year. This one will age with the best. It’s one of those jams that someone in LA will hear and wish they wrote; I think Randy Newman would like this one.

“I had a strong sense to play it real cool when we were first working this one out, a lot of it can be attributed to the fact that every night on tour we would sound check with Neil Young’s Albuquerque. That’s one of my ‘all time’ jams, for sure. I would love to hear that Love Can Be Kind made it on to someone’s mix tape someday. Deep down I’ve always wanted sophistication, soft rock and hopelessness to overtake the better part of one side of an LP. There is an ebb and flow to the song that carries me emotionally through it. I hardly think about my playing with this one. I’m usually so overtaken by the vocal melodies and lyrics that I tend to just mimic or harmonise my guitar parts with Brian’s vocals.”

BS: “What can I say about this one? Jake and I got some real nice stuff going through the intro. This is probably THE song that our quartet was built to play. Everyone’s first impulse just nailed this one. It’s been great since the first time we played it together.”

Shame Engine / Blood Pleasure is out now on Wichita Recordings.