Get to know Here Lies Man, the rockers who blend Afrobeat with rock ’n’ roll

We geek out with guitarist Marcos Garcia over music and gear. 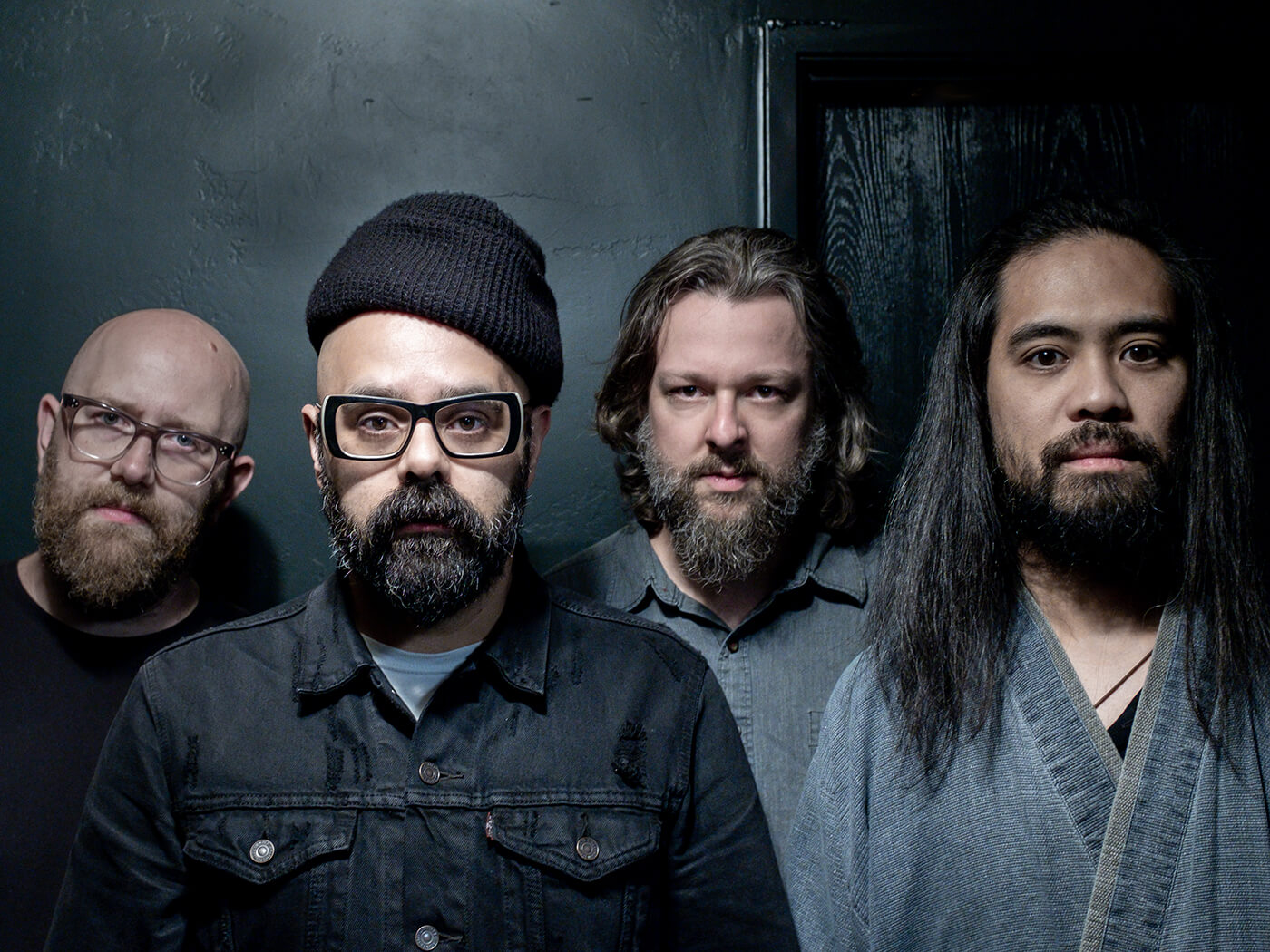 Every once in a while, you’ll come across things that wouldn’t – under usual circumstances – go together, but do. Bing Crosby and David Bowie on that legendary Christmas duet. Alice Cooper and the Muppets on that intriguing TV episode. And in the case of Los Angeles-based rockers Here Lies Man, rock ’n’ roll and Afrobeat. Over the span of two albums and an EP, these musicians have shown us that the two styles go together like milkshakes and french fries. We can’t put a finger on it, but the combination is perfect.

Here Lies Man are nowhere near done with it, too. They recently released their third studio album, No Ground To Walk Upon, and as it turns out, it’s another masterful blend of riff-heavy rock and the ancient rhythmic formula of the clave. The new album has been likened to a soundtrack for an imaginary movie, with each song painting a vivid scene.

To find out more about the band’s unconventional blend of music, we picked the brain of guitarist and frontman Marcos Garcia, who also plays in the band Antibalas. Speaking to Guitar.com over the phone, he opened up about the initial inspiration for their sound, how the record is like a movie, and his obsession with the Les Paul.

Your debut album was described as ‘Black Sabbath meets Afrobeat’. As for No Ground To Walk Upon, do you think that description of your style still stands?

To me, the idea of clave-based music, African diasporic music, and rock ’n’ roll is like an endless landscape to be explored. There are different areas to explore within that landscape, but our focus is the same: rock ’n’ roll music based on the clave.

So, what was the initial inspiration for that riff-heavy rock style?

Well for starters, there’s not a lot of clave-based rock music! The original inspiration came to me when I was tracking a record with Antibalas. I was just noodling around with a Fela Kuti song. I like to play single-note guitar lines in Afrobeat and – there’s an endless number of ways you can play the same thing – so I was just imagining Tony Iommi playing this Fela song, and it was kind of a ‘ding!’ moment.

That was the first time that I ever really saw how clearly connected the two worlds are. The single-note is called a tenor guitar line in Afrobeat, the contrapuntal figure to the bass and rhythm guitars. In rock, that’s basically your riff. So that’s when it became super obvious: form a whole rock band around the riffs.

Can you tell us a bit more about the recording process of this new album and whether it is different to how you’ve recorded previously?

Well, in terms of the process, no, it’s not any different. I will say the one thing that is different is the interludes. We expanded them a little bit more, made them a little bit longer. I just find that it’s necessary to have “palate cleansing” and to also insinuate the experience of floating in and out of different states of consciousness. That’s the function of the interlude, to kind of simulate that effect.

A press statement mentions that the album soundtracks an imaginary movie. Can you tell us more about the concept behind that and what that movie looks like to you?

Man, it’s a dark one. It’s a dark flick. I approach getting onstage as a kind of sacred duty – there’s a theatrical element, this cinematic quality to what we’re trying to achieve. And that’s inducing different states of consciousness.

And so, what is [the movie] about? Well, intentionally, there’s not a lot of lyrical content. Because I try to steer away from narrative songwriting. Stories are great, and I love that in other forms of music, but this is meant to be trans-personal, and I receive it as a transmission so I pass it along in that way.

Take Long Legs (Look Away) for example. To me… that scene… I’m picturing a person laying down looking at [their] legs in front of [them]. The concept is ‘denial’. Fighting the reality, which is that [they’re] not there anymore. It’s… freaking out about facing your own mortality. It’s about overcoming death or just facing it.

Let’s move on to talk about your gear. What are your main guitars at the moment?

God, I’ve gone through so many and tried all kinds of different things, but really, I’m a Gibson Les Paul guy. And the Japanese variants, Orville by Gibson, even the Ibanez PF series – PF 400 and a PF 200, that got stolen. Anything that’s really chunky, has a lot of sustain, as is the Les Paul tradition. That’s what I go for. That’s my main thing.

And I kind of have this weird back-and-forth with the SG. I’ve already bought two and sold them, and now I’ve just got a third one, traded some stuff for it. I get them and I love them, but then I sell them – I don’t understand it.

There must be some sort of psychological barrier there with the SG.

I think I see it as wanting [the SG] to have more sustain. I mean, I love how they feel, and I love how they look. And I love the kind of growliness that they had. But then I wanted it to sound more like a Les Paul, you know? So I always go back to the Les Paul. I’m just a Les Paul guy that has this back-and-forth thing with the SG [laughs].

So how did you realise that you were a Les Paul guy?

My first guitar was an LP-style Cort with a bolt-on neck. I was thinking about this the other day, like, why it feels right to me. And I think if [a guitar] doesn’t weigh like 9 to 10 pounds, with the exception of the SG, it doesn’t feel right to me. Just something about the weight and heft of it, and the way the neck feels. I don’t know how it came about, but that’s just what feels like a guitar to me.

Has your setup changed over the years?

One thing that has changed is that I’ve started experimenting a lot more with different pickups. That’s the main thing. I like high output pickups, but I may go back to low output PAFs, you know, it’s just endless tone-chasing conquest. Other than that, I still play 12-gauge flatwound strings. And I still love tube amplifiers. I will say the one difference is that I now play them louder than I ever did before. And I’m looking for amps where the power tubes saturate. I’ve been pushing the power stage, much to the chagrin of my bandmates [laughs]. So yeah, playing louder and trying to drive the amp more.

What made you use flatwound strings? To some players, that would be kind of a left-field choice, unless they’re playing bass or have come from a bass side of things.

I don’t know, man. I used to play jazz and I just love the way flatwounds feel. I also don’t like the squeaking sounds strings make when you’re sliding. I’ve been playing flatwounds for 15 years, at least. I never thought of it as a “left-field choice”, to be honest. It’s just kind of this is my go-to. I don’t like the feel of roundwound so much.

So what about effects pedals and stuff? What’s on your pedalboard at the moment?

God, that fucking thing, man, that thing. I went down this crazy rabbit hole of fuzz pedals some time ago. Now, it’s just mostly one treble booster and a couple of different parametric EQs and the occasional overdrive. And a Wah, a reverb, and a delay [laughs].

But the dirt component has changed a lot. Honestly just boosting the amp, I always find, feels the best. So if I can just kind of take either a treble booster or parametric EQ and just push the shit out of the power section, it sounds the best to me. It sounds the least compressed. I want an uncompressed yet, you know, overdriven sound.

Is that how you’re achieving it then? Using a parametric EQ rather than a dedicated boost pedal?

Yeah, I actually don’t have a boost, just the volume on the parametric EQs. I have an Orange Two Stroke, the WMD Parametric and the Tech 21 Q-Strip. Those all have volumes on top of the boost, so you can really push the amp pretty hard.

Do you have any holy grail gear that you want or plan on purchasing?

Right now I want to say there is not, but if I just think about it too much then I may start developing an obsession that might take hold [laughs]. There is an amp and a pre-amp that I want to design, though. I’ve started talking with Caleb Barton from Bridge City Sound, so I guess the thing that I want doesn’t exist yet.

It’s a type of amp that would be great to combine with some kind of a pre-amp pedal that has extra voices. So, you can have two voices on the amp and then a standalone pre-amp that has a couple of voices and then you basically have four channels to work with.

No Ground To Walk Upon is out now via RidingEasy Records.