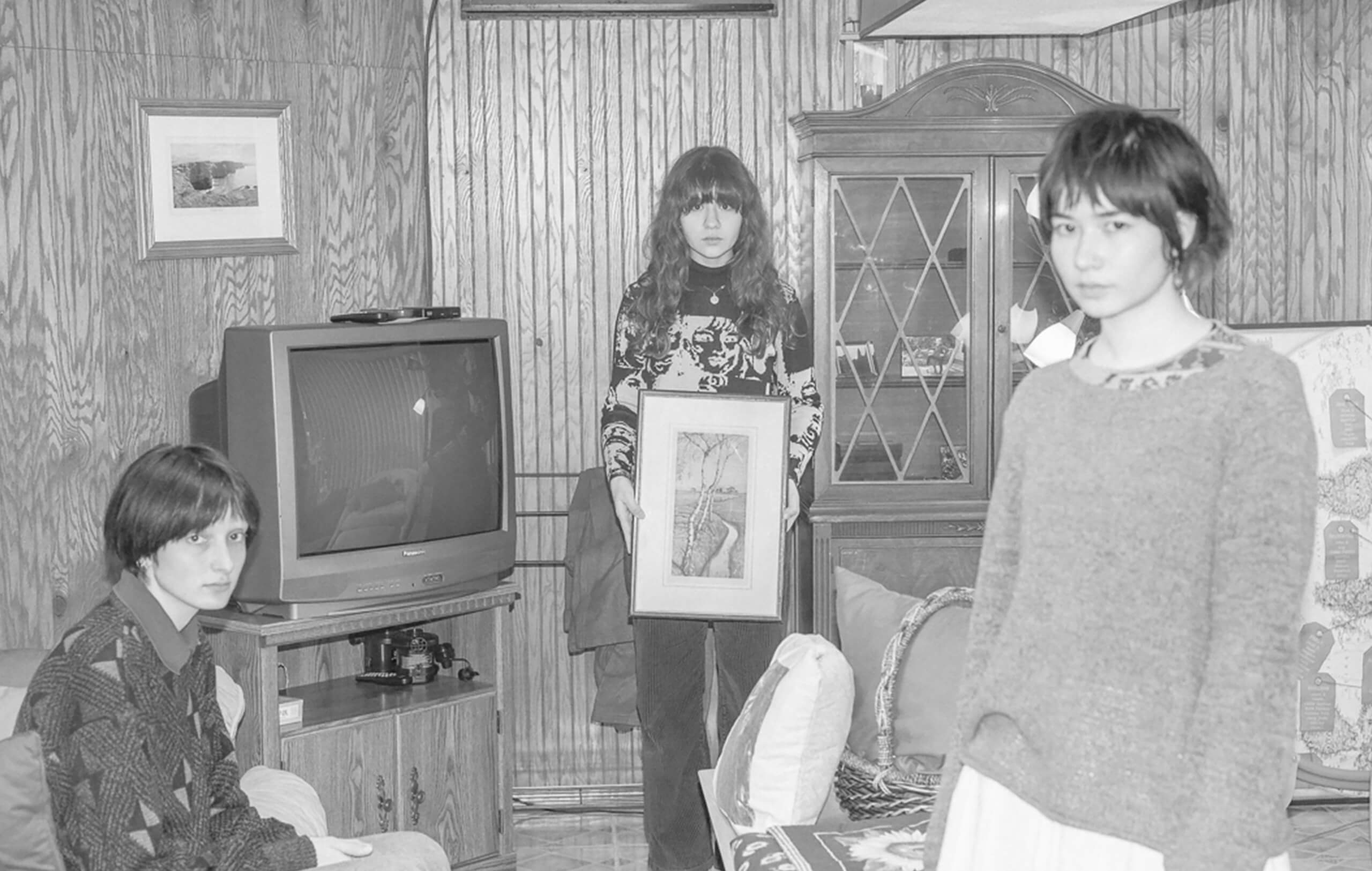 Tipped as some of the best the 2020s has to offer when it comes to the noisy, shoegazey side of indie-rock, Horsegirl are often reviewed as this decade’s answer to 80s and 90s alt-rock. But when we catch up with guitarists Nora Cheng and Penelope Lowenstein it’s clear that they’re not making music just for the Gen-Xer who owns Goo on vinyl: far from it. “There’s something empowering about going to a rock show where everyone on the bill and in the crowd is under, like, 21,” Penelope says. “It feels like: this is music for us, made by us. We grew up all in the same city, making it for each other.”

That city is Chicago, home to a vibrant indie-rock scene consisting mostly of teenaged bands. While Horsegirl don’t make their influences a secret – a strong love for My Bloody Valentine, Sonic Youth and more is audible on Versions Of Modern Performance– it’s not the need to revive any particular sound that drives them. “Obviously we were influenced by those bands, that’s what made us want to start writing music,” Nora says. But at this point, we really are pushed forward by the other kids our age, who are reigniting the guitar.”

“That’s why sometimes when I hear the nostalgia take on our music, it’s like… well, if you were in Chicago, seeing it, it really isn’t nostalgic, it’s such a youth movement,” Penelope adds. “The ‘nostalgia’ thing doesn’t feel like my reality.”

The band’s formation within a live scene inevitably led to them imbuing that into Versions Of Modern Performance. Being a noisy rock band in Chicago there was really only one studio they were ever going to record it in. “It was so much about capturing a live feeling, which I also think is the core of the history of Electrical Audio,” Penelope says. “That influenced how we looked at tone and the way things were recorded. It was just that feeling of the band being there. And the album was written in a sort of live, improvised setting, and recorded very live.”

It’s easy to assume that every new band is a product of the internet at least in some way, and so it’s refreshing to hear just how close-knit the organic, offline scene in Chicago is. We’re curious as to how Nora and Penelope view the streaming-centric world they’ve been thrust into. “We’ve heard stories, like this guy who didn’t know what Galaxie 500 sounded like, for ages, but he kept hearing their name thrown around, but he never knew what they sounded like because he never found them in a record store,” Nora says. “It’s hard to have that kind of experience with music now.” 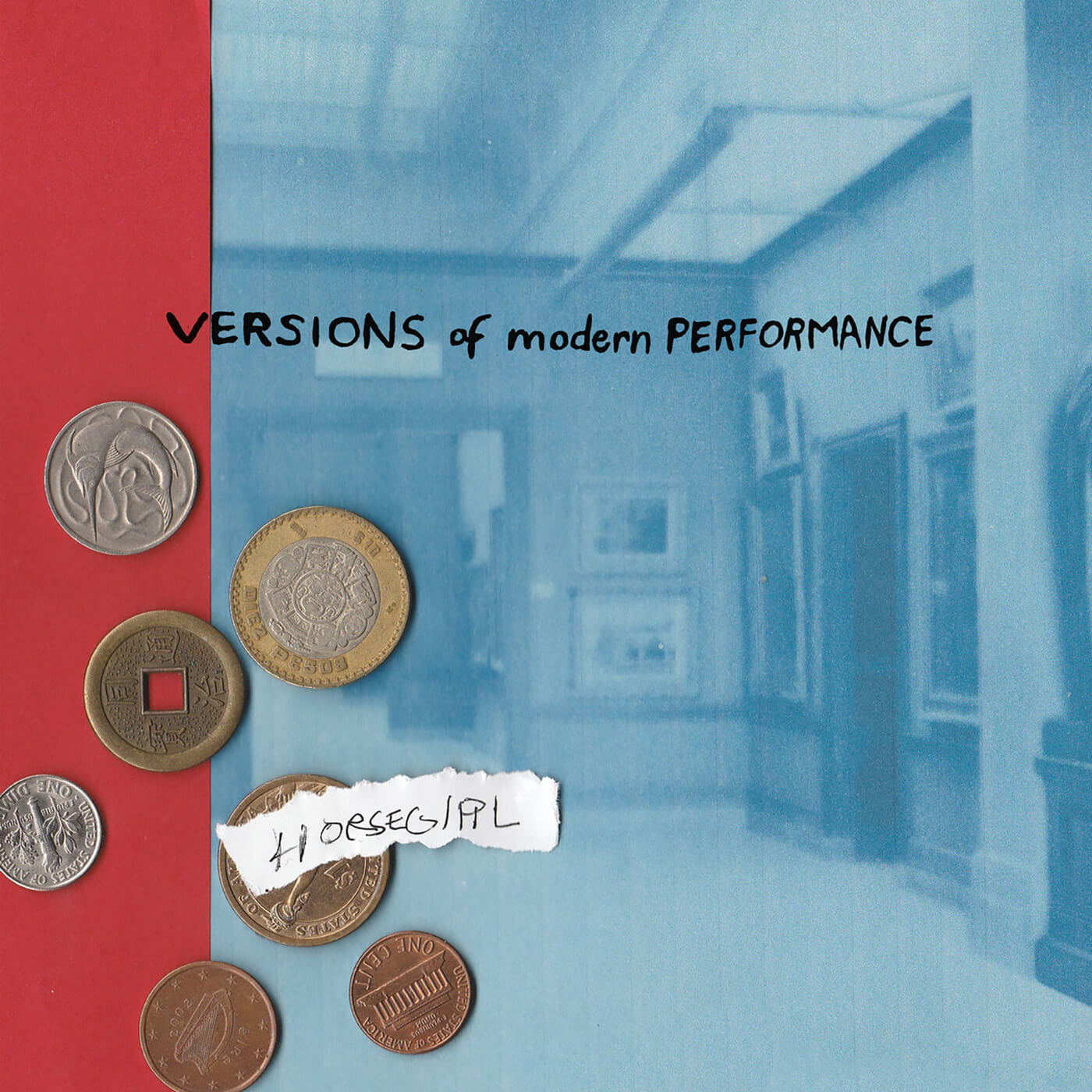 Penelope adds: “The truth is I am anti-streaming. But I do feel grateful for the ways that we’ve been able to find so much music with the internet. But, since high school, I’ve noticed, our band specifically we all collect CDs, I can show you, hang on: this is my CD collection,” she says, tilting her camera to a bookshelf rammed with discs. “We’ve all gotten very into physical music recently. I also have had obsessions with records since starting to collect physical music in a way that I never had when I was consuming music online.”

This led to the band closely considering how Versions Of Modern Performance would exist as a physical item. “The tracklisting is different on the physical release than it is on streaming,” Nora tells us. “Because – well, there’s various reasons. But on the physical one, we wanted it to be this whole experience where you sit down and you listen to the whole thing. And that means like, you can have the instrumental intro go on for a couple of minutes at the beginning.”

And so the digital version is a little grabbier, starting with the single Anti-Glory: a concession to the attitude the streaming giants now require of bands. “As someone who’s making music now, it’s not great,” Penelope says, expanding on her “anti-streaming” thought from before. “The idea of putting a ton of work into a long thing, and then someone only listening to 30 seconds of your top song when you’ve made a lot of weirder stuff than that. And the fact that it’s a lot harder to be a living musician, when you’re not making any money from the way most people consume music. It is a frustrating reality to be a young person in.”

Does she think change is coming? “I can’t say. Our only experience is being high-schoolers in a city with a group of kids in bands, in rock bands primarily. For example, a friend of ours runs a zine in Chicago that over time has become something that people really look forward to new editions of. I remember, we were shooting the video for Dirtbag Transformation (Still Dirty) and someone had brought copies of the zine. And I saw all the kids laying around before we shot it, reading, and catching up on what was going on.”

“I’m not saying it’s not the most convenient way to spread information anymore. But, when so much stuff is online, there is an appeal to analogue stuff. That, I think, connects to the fact that we’re just a trio that – if you give us the instruments, we can play it, you know, completely as it is on the record without needing a computer or anything else. I think that is very appealing.”

Speaking of instruments: Horsegirl take an interesting approach to having a bass guitarist. Both Nora and Penelope swap between guitar and Bass VI as needed. “Penelope and I are both guitarists,” Nora says. “I’ve picked up a bass, and I don’t enjoy how it feels, it doesn’t feel natural to me. But with the Bass VI, you can do low end stuff and high end stuff. It’s also a familiar dimension and feel. It just seemed like something that would have been very helpful to us in this trio formation.”

“I do not like playing bass. I like playing Bass VI,” Penelope adds. “It’s so its own instrument in a way that you can’t think about it in the context of anything other than ‘here’s the song we’re writing. This is kind of what’s developing with the regular guitar, here’s what the drums are doing. What is the third piece of that?’ You don’t have to think about ‘a bassline’, as such.

“And as someone who’s trained a little bit, and I’m constantly trying to stop thinking about stuff I’ve been taught, it’s kind of cool to pick up an instrument that no one has ever told me how to play.”

Nora expands on how they integrate it into songwriting. “If it starts with the guitar part, and then we add in the Bass VI, it’s not like ‘okay, let’s write the bass part.’ It’s more, let’s try this and see what sounds good with this instrument. And sometimes it doesn’t work out on Bass VI, and we have a song with just guitars. It’s all just experimentation.”

This democratic approach works well for noisy indie rock, of course, where ‘showing off your sick skills’ on a particular instrument takes a back seat to creating texture. “I do feel like something that I’ve come to realise is very special about Horsegirl is that the mentality of ‘showing off’ just kind of… isn’t there?” Penelope says. “We’re all very focused on what the effect of the three of us playing together is like.” She then brings up perhaps the ultimate example: “I watched Some Kind Of Monster, the Metallica documentary. The number of times ego comes up just blew my mind because – I’m never stressing about, oh god, Nora’s trying to show off. That’s not the dynamic that we have. I feel very lucky.”

Born in the right generation

The comparison between three young people making noisy indie rock and a famously dysfunctional metal band is perhaps not a useful one. The world of guitar music is too big and complicated for that; but, unfortunately whenever a young band emerges with influences from more than five minutes ago the “will this band save guitar music?” hot takes are inevitable. But these dull hot takes dissolve upon contact with reality, and part of Horsgirl’s defence from them is exuding a genuine passion for current guitar bands.

“I think guitar music has gotten so much more interesting,” Penelope says. “Like, a lot of the guitar music being made now, I think, is very creative. There’s a lot of quiet, minimal guitar music that’s super cool. And then there are bands like Black Midi that are, like, insane. I don’t think rock music is dead.”

Nora adds: “I just think it’s different. I feel like there have been various phases where it’s like, ‘oh, this is the new thing – guitar music? Nobody cares about that anymore.’ But then it always sticks around, just in different forms. It’s not going to go away. It’s a very versatile instrument. And sometimes maybe it seems like it isn’t – but it really is.”

So what’s next for Horsegirl? Album two is obviously part of the conversation. “We speak about it amongst ourselves a lot,” Nora says. “I think sometimes with a band’s second record, you can go more experimental, or you can go more pop. And honestly, I feel like we might go in both at the same time. There’s beauty in a pop melody”

Penelope is quick to clarify: “not pop in production, though!”

Versions Of Modern Performance is out now.