We meet the Manchester four-piece’s twin-guitar attack Han Mee and Jim Shaw to talk Teles, pawn shops and why they have very big aims indeed. 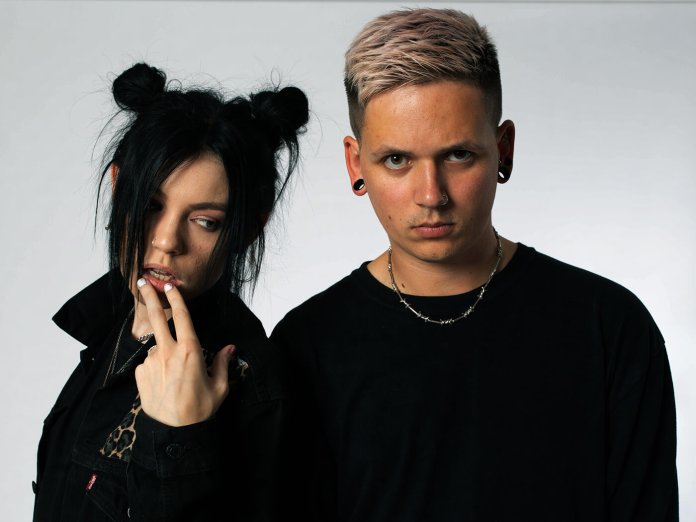 Who will be Britain’s next properly big young rock band? With their infectiously fizzy and distinct brand of pop rock, Hot Milk have made themselves clear contenders – and having supported Foo Fighters in 2018, Dave Grohl himself would certainly agree. We spoke to frontpeople Han Mee and Jim Shaw about how it all began, from tantrums in a Cash Converter to using ‘cheat’ gear instead of conventional pedals.

What inspired you to pick up a guitar?

Jim: “My auntie found this piece of shit acoustic guitar in her attic that was completely warped. It was almost unplayable. My parents gave me that and they were like, ‘Okay, let’s start putting you through some grades,’ and I hated it. I didn’t like theory either, but I just loved watching other rock acts when I was young, just owning a stage and doing what they love for a job.”

Han: “I was in Cash Converters when I was about 10 and I was like, ‘I want a guitar’, and my mum said no. I had a massive tantrum! She got me the guitar and then I didn’t touch it for like three years.”

Jim: “I think originally, I wanted to play drums more, but my parents were like ‘No!’. No-one’s ever allowed drums.”

Han: “It’s why there are no drummers. Ultimately, it was people like Joan Jett and The Runaways and a lot of old punk bands that made me want to pick up a guitar. There are so many strong women from the 70s and 80s that were just pioneering rock music and that’s just what I wanted to do.”

Han: “At the moment, I’m playing a custom [Fender] Duo-Sonic Mustang kinda combo. I tore out the tone pot because I play rhythm, I don’t really need to do anything else, I just play some meaty tones! I ripped all the shit out of it and put my own shit in it.”

Jim: “I had a Thinline ’72 Telecaster and I’d spent years changing out the headstock, I changed out the pickups and put really heavy gauge strings on it and then it got stolen. I was gutted about that! But at the moment, my kind of go-to [guitar] is my Strat Deluxe just because of the versatility in it.”

Han: “We do record a lot on an ESP LTD EC-1000; it’s quite a heavy metal guitar but that’s what we tend to record with because it gives that meatier sound. I think in the future, I’m going to probably get something like a Gibson Les Paul.”

What other piece of gear could you not live without?

Jim: “It would have to be the Kemper. We don’t play with pedals, we’re like the guitarist’s worst nightmare!”

Han: “It’s a bit of a cheat piece of equipment but the way that the world is in terms of writing and how fast you’ve got to go from the studio to playing a song live, a Kemper allows you to basically save the tone that you wrote with and immediately transfer it to live without having to recreate it. It doesn’t necessarily take away musicianship, I don’t think, it’s just the world that we live in. If everyone else is using it, you’re going to [fall] behind if you don’t. I know that there’s a few purists out there that won’t believe in a Kemper, but fuck ‘em, is what I say.”

What’s been your most memorable gig?

Jim: “I think it was probably the same for me.”’

Han: “This was the first time my parents had come to watch me ever and it was on this massive stage supporting the Foo Fighters. It might not have been the best gig musically, but it was a big gig for us personally because we had all of our families there, all of our friends came. We came offstage and we were like, ‘That wasn’t shit!’ and six months prior, I was still working in an office and we were like, ‘Hang on, we can do this’. It was a bit of a moment for us.”

Where do you see yourself in 10 years’ time?

Jim: “Headlining arenas, if the world survives that long. Headlining festivals and hopefully being happy.”

Han: “Someone’s gotta do it, why not Hannah and James from Manchester? If you don’t think it, it’ll never happen. If we fall a little bit short then that’s still not bad.”