“We never have any idea what the album is going to sound like”: Hot Water Music on their long road and new album Feel The Void

Hot Water Music’s Chris Wollard and Chris Cresswell on an unexpected return, forging a new chemistry, and why they’re “happy as a clam” when surrounded by old Gibsons and Fenders.

When someone says being in their band is like being with family, they usually mean it in a ride-or-die sense that doesn’t really reflect what it’s like to be in most families. Hot Water Music are maybe a little more realistic in that regard. After almost 30 years together, they’re still here and still tight – but only after weathering hiatuses, solo records, side gigs and the shifting sands of American punk. It hasn’t always been smooth. But that’s family for you.

Framed in a Zoom window, Chris Wollard sits on his porch with the first of several cigarettes clasped between his paint-splattered fingers. He’s just back from working on drummer George Rebelo’s house. “This is going to make us sound so inbred,” he says with a smile. “But I have to wait for Chuck’s little brother to redo his screening. He’s not really ready for painting yet.”

Chuck is Chuck Ragan, Wollard’s partner in fronting Hot Water Music since the early 1990s. Their dynamic – gruff, hollered hooks, muscular guitar interplay – helped inspire a whole subset of bearded, flannel-favouring bands, who latched onto a stellar run of records that began with 2001’s A Flight and a Crash and then filled the gap when they initially went their separate ways in 2006.

For many, the back-and-forth between Wollard and Ragan is Hot Water Music. That makes the ringing success of the shake-up on the band’s new record, Feel The Void, all the more remarkable. In 2017, five years after the release of the band’s comeback record Exister, Wollard stopped touring in order to preserve his mental health. The band were on board but it seemed to spell another ending.

An answer was found among the bands that followed in their wake, with the Flatliners’ Chris Cresswell called up to fill in for Wollard at the Fest, a huge punk festival held annually in Hot Water Music’s hometown of Gainesville, Florida.

It then became a regular gig, with Cresswell’s scorched-earth rasp fitting in beautifully alongside Ragan’s barrel-chested roar. “It was very surreal,” Cresswell says, responding to Wollard’s T-shirt and porch setup by pointing out the snow drifts outside his place in Toronto. “The Flatliners wouldn’t sound the way we sound without being informed by the bands we really love, and one of those is Hot Water Music.”

It took some cajoling but Cresswell was eventually convinced to become a recording member of the band. Having sung some backups on their 2019 EP Shake Up The Shadows, he’s very much a third guitarist and vocalist on Feel The Void.

“It was really uncharted territory, probably for Cresswell too,” Wollard says. “He’s got his own band. When you think about rock ’n’ roll, it’s got one or two guitar players. I had no clue how to do it with three. I didn’t have a plan. I don’t think any of us did, other than plug in and figure it out.” 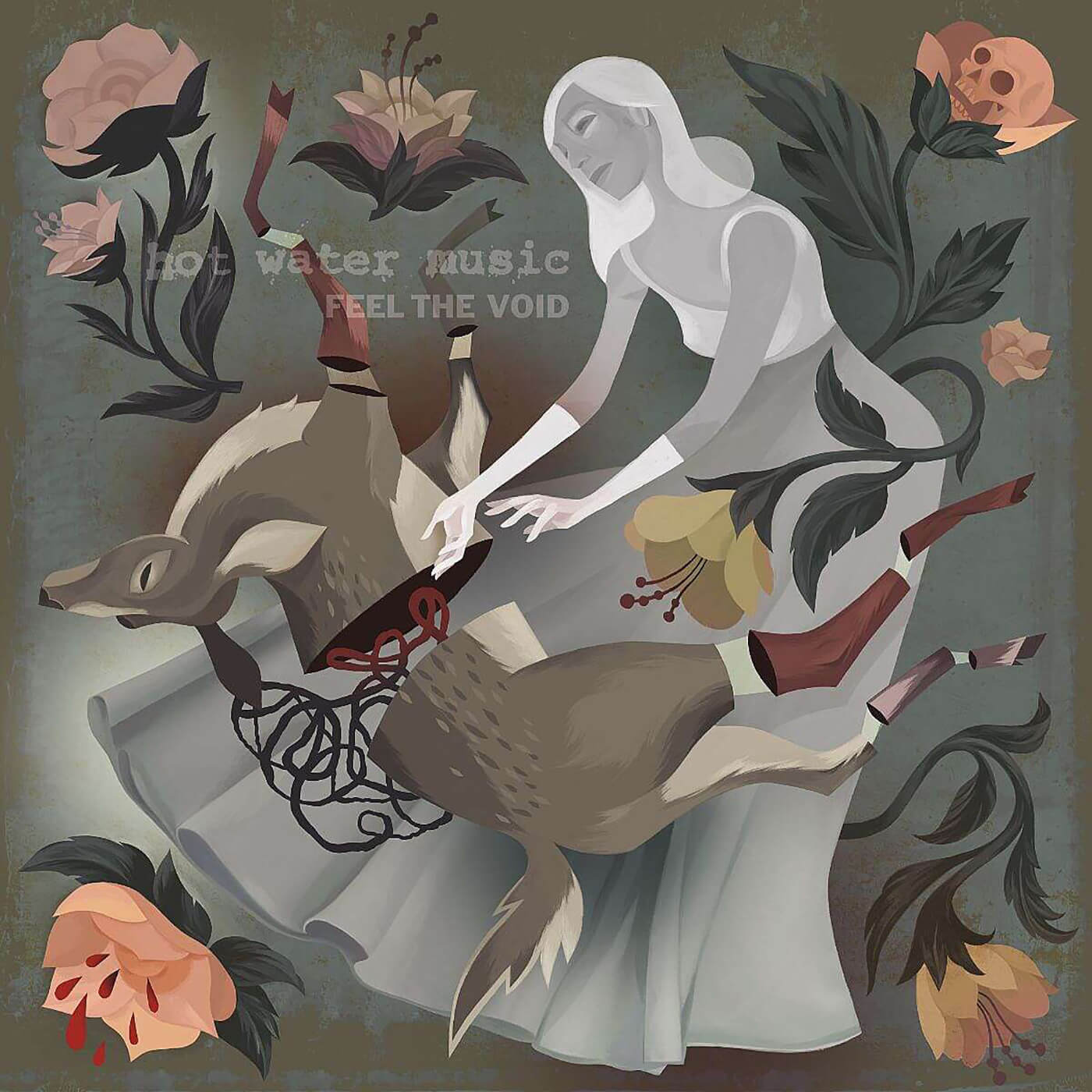 The fact that they did figure it out is probably down to Cresswell being immediately elevated to a voting member of the band and given the same status as everyone else. He wrote, sang, and played just as Wollard and Ragan did, and he had a say. “The most exciting thing was how no-one was precious with stuff, especially in the writing process,” he says. “It all started to feel pretty good, and natural, once we were all together.”

“We’ve been together a long time and we’ve definitely suffered from those problems before,” Wollard says. “When you’re starting out that’s how you are, that’s how you feel. We all learnt a long time ago that ego is your enemy in the creative process, or the discovery process. I know some bands work like that, and it’s cool. I don’t care what they do. But I think we would have stopped playing a long time ago if it was that way. I’m so aware of the guys and their talents. I have so much respect for everybody. I think it would be boring as hell if I wrote every guitar part, the bassline, the drum part. That’s just not interesting to me.”

In terms of feeling validated as a creative voice within the band, Cresswell points to one particular moment that has stuck with him. “I remember sending an idea pretty early on and George called me like, ‘Hey, I’m going to work on a drum part for this. What do you think the song’s going to be about?’ I was like, ‘Shit, I’ve never been asked that before by someone playing drums. He cares that much. He wants to try to apply the energy and the feeling from any lyrics or the place you think that riff is coming from.’”

Feel The Void was tracked with returning producer Brian McTernan, who also helmed A Flight and a Crash and its imperial phase follow-ups Caution and The New What Next, at Black Bear Studios in Gainesville. It has a knowledgeable corner on its side, then, but it’s still surprising that it’s executed with such style – it lands every punch in the Hot Water Music locker, from full-throttle No Idea ragers such as Collect Your Things and Run to the lilting, emotionally resonant title track. It feels like there’s a sense of clarity here, that it’s everything a Hot Water Music record should be.

“What a Hot Water Music record should be means something different to you than it does to me,” Wollard counters. “There have been times when we’ve done a lot more of a singer-songwriter approach to stuff, different eras of work, all depending on what’s happening in our lives. Are we travelling a lot? Did somebody just move to California or Chicago? You work through it. But we never have any idea what the album is going to sound like. We never have a fucking clue.”

Focusing on the record meant shelving any thoughts of what might come next. Maybe there’s something in that too. The task at hand was king, just as it was when Cresswell first came aboard in a live capacity, and every effort went into fleshing out this new iteration of the band.

“Usually when you’re doing a record you’re also figuring out how you’re going to play it live,” Wollard says. “We couldn’t even think about that. All those problems that’ll come later on, they’ll come later on. Fuck it. Who cares?”

The band went to Black Bear with 18 to 20 songs in contention, and resolved to record 15 or 16 of them before whittling things down to 12. To do that, they wrote each track’s name on a board, took it outside to the carpark and held court. Everyone, including McTernan and engineer Ryan Williams, had to plead their case. That perhaps explains the sense of balance in the running order, with input from faces old and new, with inside and outside perspectives, all in the mix. What does Wollard have to say about that? “Thank God it wasn’t an even number of people.”

With Cresswell coming down from Canada with his Les Paul Classic and Ragan shipping back home from California to record, Les Paul Juniors in tow, a lot of the tones were found through a combination of Wollard and Williams’ gear, with five or six Les Pauls in rotation, plus a few ’68 Melody Makers and a Telecaster that Wollard has ‘Frankenstein’d’. “When we get into guitars I just show up with a truckload of shit and I’m happy as a clam,” he says, adding: “I’m 46 years old. I like Gibsons and I like Fenders. What are you going to do?”

Wollard notes that much of the record’s sound was pinned down by blending amps in concert with Williams, who has become a vital set of ears over the years. “I’ve done so many albums with Ryan over at Black Bear, we just have such an awareness of each other and of the amps we’re using,” he says.

“I’ll get in there and start messing around, pairing things up,” he continues. “Basically we’re always going to have my Marshall 2203 800 – that’s been on most of our records. I have a Gosh Sound that Josh [Jordan, Gosh founder] built me that’s completely custom but based on my Marshall. I was starting to find there were a couple places I wanted to go with my Marshall, and I was having some issues. I wanted to monkey with it, so we did some tone shaping with the bottom end, had some real fun with some bells and whistles, changing out resistors and different stuff.

“Then there’s another Gosh Sound that Josh built for himself. That’s the Tone Chaser. That’s a 100-watt beast. Just an absolute beast. If you wanted to do metal shredding, this would be great. If you want to play rock ’n’ roll, it’s great. You can push it pretty hard. My Orange OR-50 is always in there, and a Rockerverb 50 MK II. Chuck and Cresswell are both very comfortable with those. We usually have a black[-panel] Bassman that we add in, and we also had a Vox AC30.”

Cresswell has two words for it: “Maximum tone.”

Feel The Void is out on March 18 through End Hits Records.