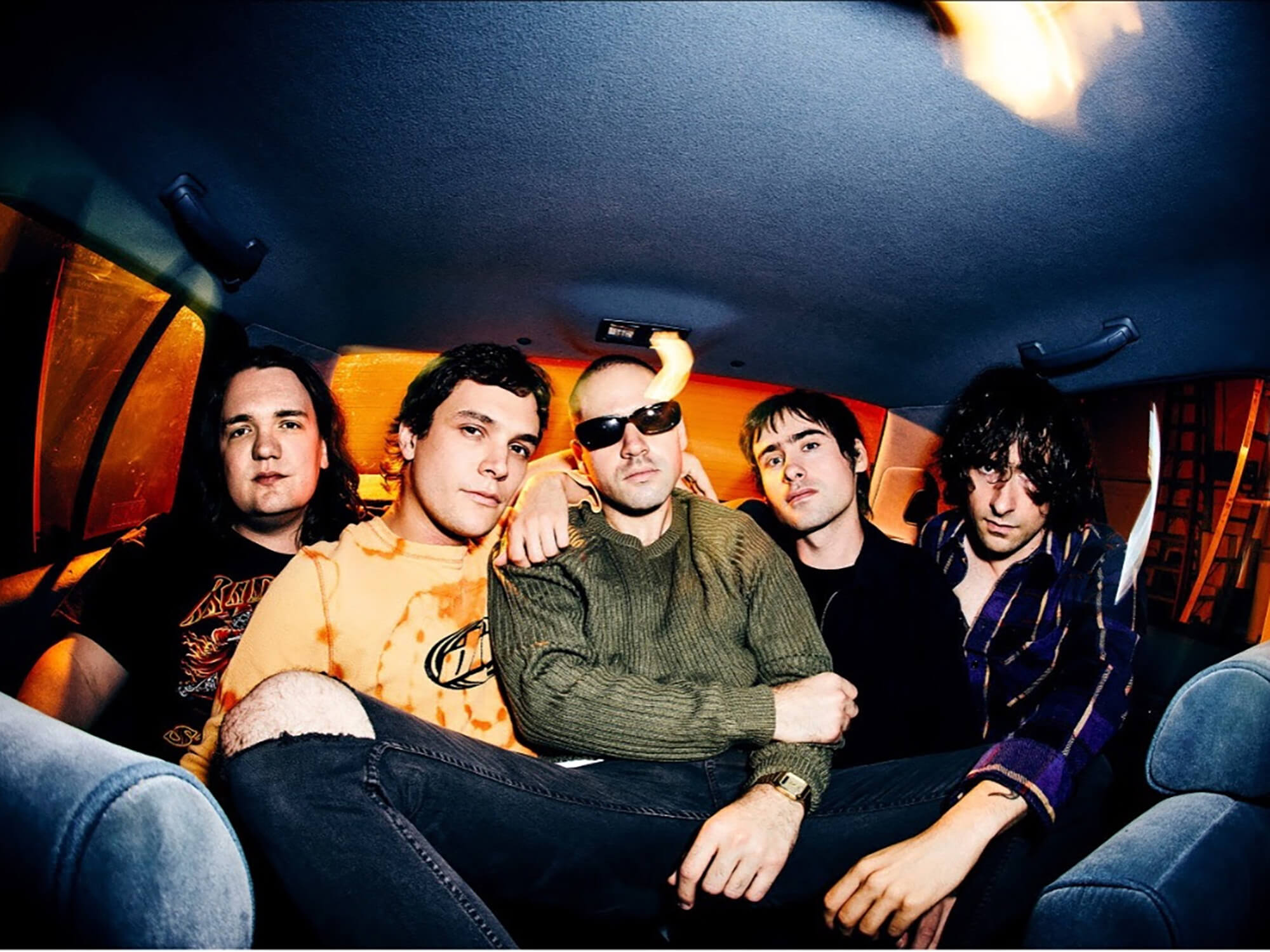 The Louisville garage-punks on why they had to tear some things down to follow their instinct for “fun”, worshipping Blink-182, and fostering a truly collaborative guitar playing environment.

Out of Louisville, Kentucky, White Reaper have developed a solid rep for this sort of stuff over the past decade, putting out a trio of records that alternately proved their mettle as garage-rock revivalists, Cheap Trick-style melody obsessives and uber-slick pop-rockers. Their latest missive, Asking For a Ride, permits all their different preoccupations to bleed into one mass of riffs, sugar-rush hooks and fizzing leads. “A lot of our decisions are informed by what’s fun for us,” Esposito says.

He’s not lying, but that sense of fun is backed up by a meticulous streak. It quickly becomes apparent while talking to Esposito and Thompson that they will chase down a spark until their lungs give out. Fog Machine is a great example of this character trait – it’s a freewheeling, thrilling rock song that does not sound like it was agonised over, but it was. “I feel like as soon as I came up with that riff, I immediately called Hunter,” Esposito says. “But that was pretty much all it was for a while – it was just a riff for a long time.”

The arrangement came together at the very last moment, clicking into place while being workshopped in the rehearsal space just as time started to run out before tracking. “We were actually listening to an old demo of it the other day that just never resolves,” Thompson says. “I don’t know why. We were trying to think of other riffs that could go with that, and it just did not seem to work out.

“Right before the record we took it to the band and we were still on the fence of if we were even going to use it. We played it, figured it out in a couple of days before recording it and it was automatically one of the most fun ones to play. Obviously, this is a pretty funny rock song, it’s got all the tropes. I feel like some of our best songs come out of that real last minute excitement.”

The band – rounded out by keyboard player Ryan Hater and brothers Sam and Nick Wilkerson on bass and drums respectively – swung and missed at Asking For a Ride a couple of times before making a proper connection, with one scrapped attempt at capturing the record in Seattle – put down to the wrong producer, the wrong space, and the wrong time – butting up against the Covid jumble of Zoom calls and all the time in the world to sweat the small stuff. 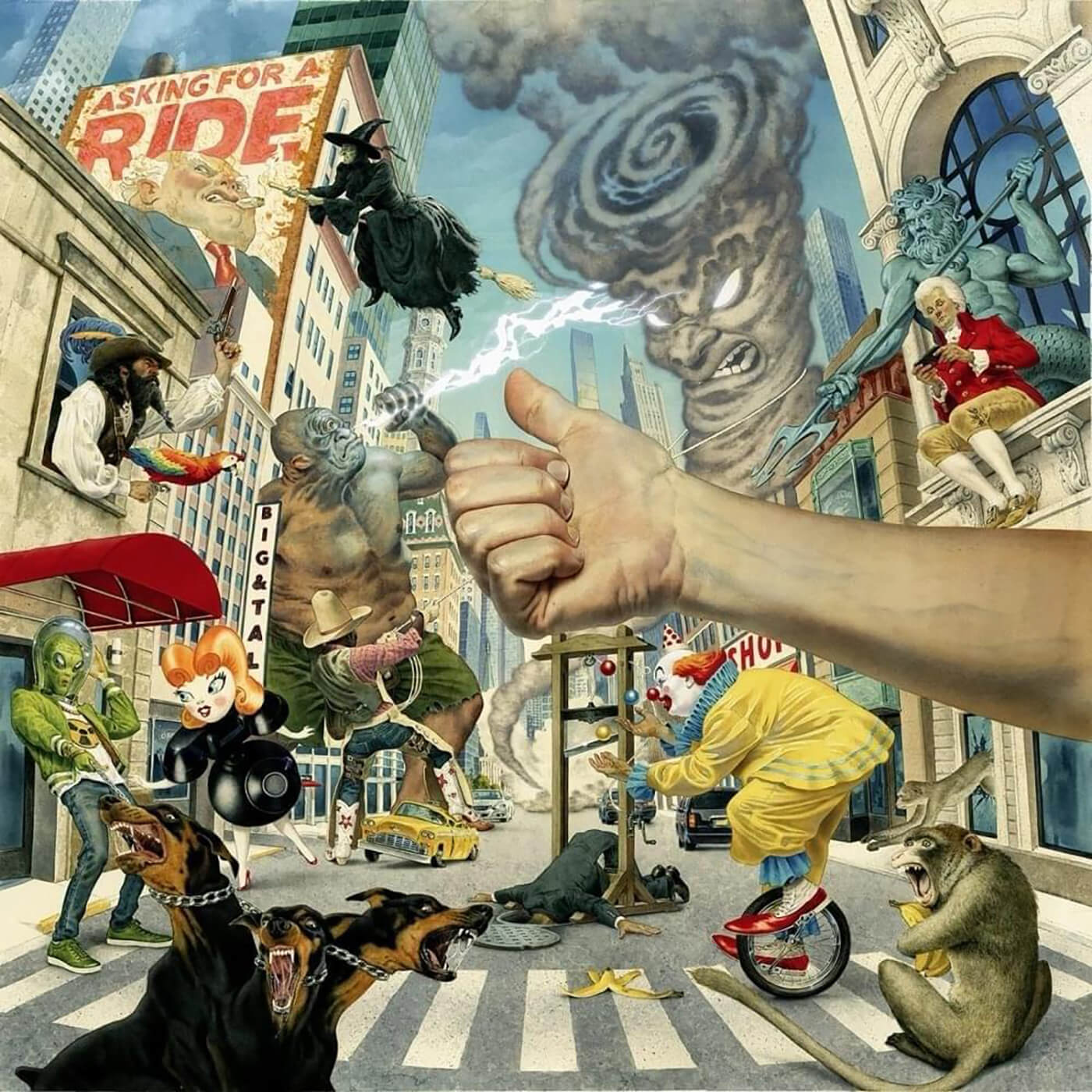 “I think we did a lot of things the wrong way,” Thompson says. “We’d try to write with all five cooks in the kitchen at times, and sometimes that just doesn’t work. We realised that we need to move swiftly on songs, we need to get the core ideas built, then take them to the band and not lose momentum on them, not let them sit and over-produce them on our computers over Zoom and add 15 guitar tracks. Then it just feels like this insurmountable song that is hard to recreate.”

Having worked with Jay Joyce, a big hitter in the world of pop-rock and country, on 2019’s You Deserve Love and Kevin Ratterman, an emo vet whose production work spans My Morning Jacket, Emma Ruth Rundle and the shit-kicking Canadian rockers Sam Coffey and the Iron Lungs, on their 2017 mission statement The World’s Best American Band, White Reaper eventually guided the process themselves during sessions with engineer Jeremy Ferguson at his Battle Tapes studio in Nashville.

Perhaps as a result, Asking For a Ride is fast, loud and deliriously enjoyable, but it’s also undeniably scattershot. It’s essentially an exercise in throwing ideas at the wall, bouncing from Metallica-esque riffage to Thompston-led Blink-182 worship and tapping solos that nod to Esposito’s love of Randy Rhoads in a way that reflects the band’s top-to-bottom involvement and love for these sounds. “No one cares as much about the band as the people that are in the band,” Esposito says. “It’s kind of hard to find someone else with the same kind of fire or passion.”

“What we needed was a good engineer who could facilitate because there’s not really a lack of opinions or tastes in the room about how things should go,” Thompson adds. “It doesn’t feel necessary to bring out a neutral perspective sometimes. A lot of times the engineers can contribute that almost in a more meaningful way, because they’re so focused on the music all day long. A producer is this elusive art that can have its place and be great, but it’s like Tony said, we just feel we know the music the best.”

There was a complementary sense of familiarity about much of the gear that was in play during recording, with Esposito’s Gibson ’67 Flying V Reissue in heavy use by both musicians, alongside a smattering of Les Paul work and Thompson’s Nash Strat. Tone-wise, Thompson’s go-to Bassman was bolstered by a series of small amps, among them a Vibro Champ, a Princeton and a 50-watt Friedman Runt that handled all of Esposito’s playing. “I also use a Kemper some, just for ease,” Thompson adds. “I’d maybe split the signal and have the Kemper and then send my dry guitar into an analogue pedal chain and amp. That’s kind of my typical move in the studio right now.”

This approach – along with liberal use of a Ten Years pedal modelled after Josh Homme’s secret weapon Peavey Decade amp – gives much of the LP a buzzsaw style, keeping alive the garage-rock scuzz of their early days even when, as on the title track, they’re essentially delighting in meathead metal riffs. Thompson, interestingly, is almost caught between two stools after the fact – he feels like they could have gone full meathead. Long-time listeners might disagree, noting the way Esposito’s voice trades slashing strokes with the guitars, but he’s still mulling it over. “It’s got this real bite-y thing,” he says. “I have kind of regretted it since but, you know, it’s got its own charm.”

Not to labour a point, but that charm is pretty obvious from the outside. There is nothing self-conscious about Asking For a Ride – it’s a record that was designed to rip, and it does rip. It has a celebratory air to it, founded largely on Esposito and Thompson’s chemistry together. It’s been almost six years since Thompson joined the band during the touring cycle for The World’s Best American Band and they’re now finishing each other’s sentences.

Here’s an example: when Thompson mentions having his mind blown by hearing Blink’s All the Small Things for the first time as a third grader watching the Nickelodeon movie Clockstoppers, Esposito immediately knows the exact scene he’s talking about. “I would rewind it and play it over and over again,” he says. “And then I would ask every single one of my parents’ friends if they knew what it was. Of course, they did not.”

Crucially, while both players can go hard (and are very happy to do so here) there’s no sense of one-upmanship or empty showboating to their interactions. As we’ve established, rock ‘n’ roll is supposed to be fun, and there’s nothing less fun than someone sweating pure desperation while shredding their fingers raw. Esposito and Thompson’s chess matches would be the sort where the loser is genuinely stoked for the winner. “It’s really as simple as hearing the other person play one lick and being like, ‘What was that?’,” Esposito says.

“I think there’s a lot of active listening,” Thompson continues. “Ideas are often prompted by or pushed along by the other person’s interest, and validation that something’s cool. We’ve both played guitar for so long that sometimes you lose perspective on what’s cool. That’s why it’s fun to play with Tony, because he hears things in my playing that I’m not even thinking about or paying attention to.

“We’ve gotten a lot better about communicating what we like – we’ve had some moments where Tony will have an idea for a solo in his head, but wants me to play it because it’s more my style. He’ll hum something out, and then I’ll follow that thread. We have a little bit of a hive mind.”

White Reaper’s Asking For a Ride is out on January 27 through Elektra.