Interview: Jeorge Tripps on his perennial relationship with pedals

He’s worked with Joe Bonamassa, Eric Johnson, Eddie Van Halen and the Jimi Hendrix Estate and designed an effects pedal that spawned whole new genres of music. Not bad for an engineer who began his career as a self-confessed “pain in the ass” to the big boys. We meet Way Huge main man Jeorge Tripps… 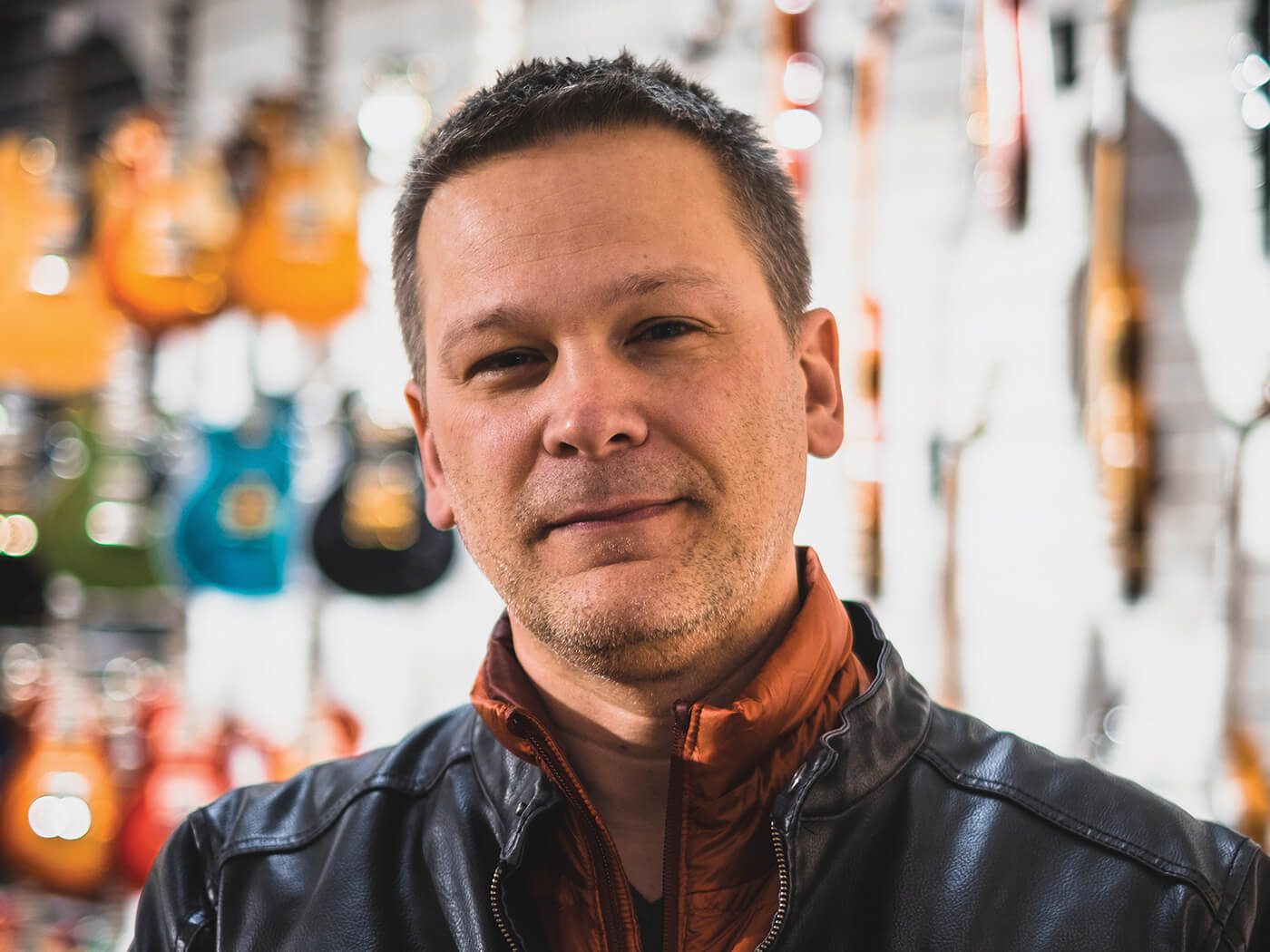 “I remember thinking, ‘I wonder if in 20 or 30 years my shit will still be around, or if anyone will care!’” laughs Jeorge Tripps, founder of Way Huge Electronics, designer of the now-legendary Line 6 DL4 and the man responsible for some of the most exciting pedals ever to hit the mass market during his 12 years (and counting) at Dunlop Manufacturing. When we catch up with him, the California resident finds himself jet-lagged in snowy Birmingham as Dunlop’s UK distributor Westside has organised a Q&A event in the city’s impressively cavernous Guitar Guitar retail store. We ask the affable Mr Tripps how his relationship with stompboxes began.

“Literally accidentally!” he recalls. “I’m a guitar player, and I would noodle around with fixing stuff and whatnot. I moved to LA in 1991 and I had a copy of Craig Anderton’s Electronic Projects For Musicians and broke it out again and just started messing with it, making pedals for fun. For a couple of years, it was just really for fun and for friends.

“I was working in a place called Andy Brauer Studio Rentals and then I met Dave Friedman and ended up working for him and working on racks and building pedals and then somewhere in ’94 I went: ‘I’m just gonna build these pedals full time.’ People were wanting them and it seemed like a smart move, I guess! It was not like a planned thing, I was just fidgeting around reading books. So that was Way Huge, then in January 1999, I shut it all down and went to Line 6 and did seven years at Line 6 and then jumped to Dunlop; it’s been 12 years at Dunlop now.” 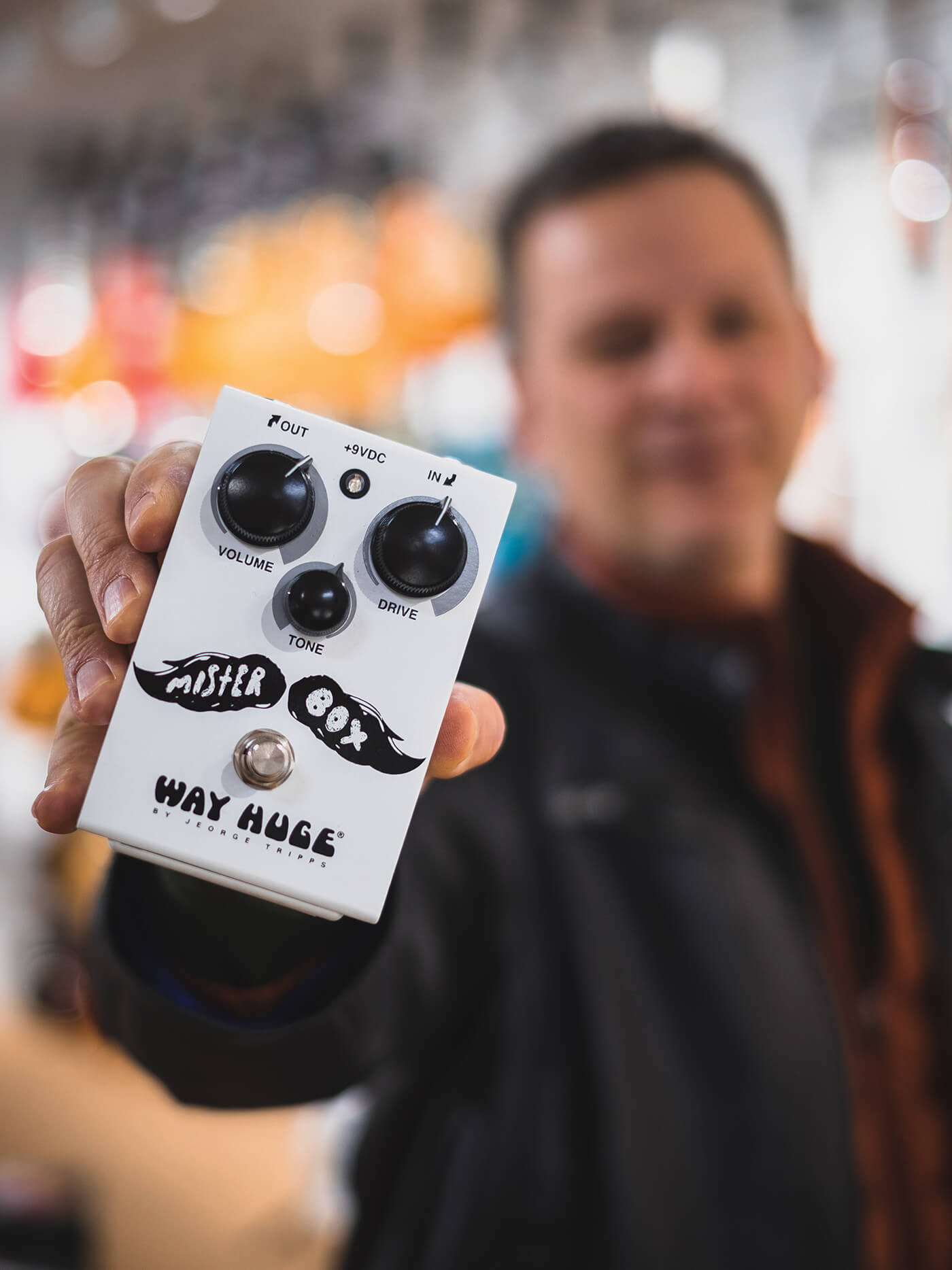 We wonder what it was like to be around at the dawn of the boutique pedal business. “People weren’t really doing Big Muff clones or Tube Screamer clones back in 1995,” says Tripps. “There was a handful of us. But everyone is a competitor now, and that’s the internet. It’s a different world. It’s great, and it’s hard. The guy who is building pedals in his garage because he put up an Instagram page… he’s sold five and it doesn’t seem like much, but there are hundreds of those guys.

“When I first started the internet was around, but it was ’95. People definitely weren’t buying pedals often over the internet. The information wasn’t there. Me and Analog Man, Mike Piera, I’ve known him since the early 90s and we used to trade schematics via the mail. We might have talked via email briefly, but most of it was letters and like, okay I’ll trade you, I’ve got these cool Boss schematics and you’ve got all those cool Electro-Harmonix ones. A lot of stuff on the web, I’d bet a lot of money it either came from me or him.

“Early on, you’d have to be nice to people! I’d call up Ibanez and get the local tech on the phone and be like: ‘Hey, can I get a schematic for this or that?’ Now you can’t. I used to call up Dunlop and I would talk to Sam McRae, who’s still there. He would send me Rotovibe schematics, MXR schematics… I still have faxes. I’d get faxes sometimes. Now they are all old and fading!

“It’s different times. You can look like a really big pedal company. You can put together good social media and it can become a big pedal company, ’cause all of a sudden, you looked proper. It’s totally different. I shut down Way Huge ’cause it was hard, and I got an offer to work on cool pedals at Line 6 with a team of people. It’s not just me having to do everything and all I have to do is the fun part, dinking around and coming up with things? Making sure it sounds good? Great! I don’t have to sell stuff or market it or build it? I was like, count me in.”

At Line 6, Jeorge was responsible for all of the 4-series floor units, including the now legendary DL4 Delay Modeler, a stompbox so influential that music listening website Pitchfork recently referred to it as “the most important guitar pedal of the last 20 years” thanks to its use by a whole host of experimental musicians including members of Radiohead, Battles, Minus The Bear and countless others. Two decades on from its launch, the unmistakable green unit still helps create soundscapes on pedalboards the world over.

“It’s pretty cool being part of that project and how pervasive it’s been,” acknowledges Tripps. “They still make it. Literally the only thing that I’m aware of that’s changed, and that happened when I was still there, is the logo on the box. Which is great, I like that kind of stuff. You make it once, you make it right and walk away!” Since moving to Dunlop, Tripps has not only designed such stage stalwarts as 2009’s MXR Carbon Copy delay, but he’s also collaborated with a host of stars. We wonder how the translation process takes place between what the artist wants and the final result. 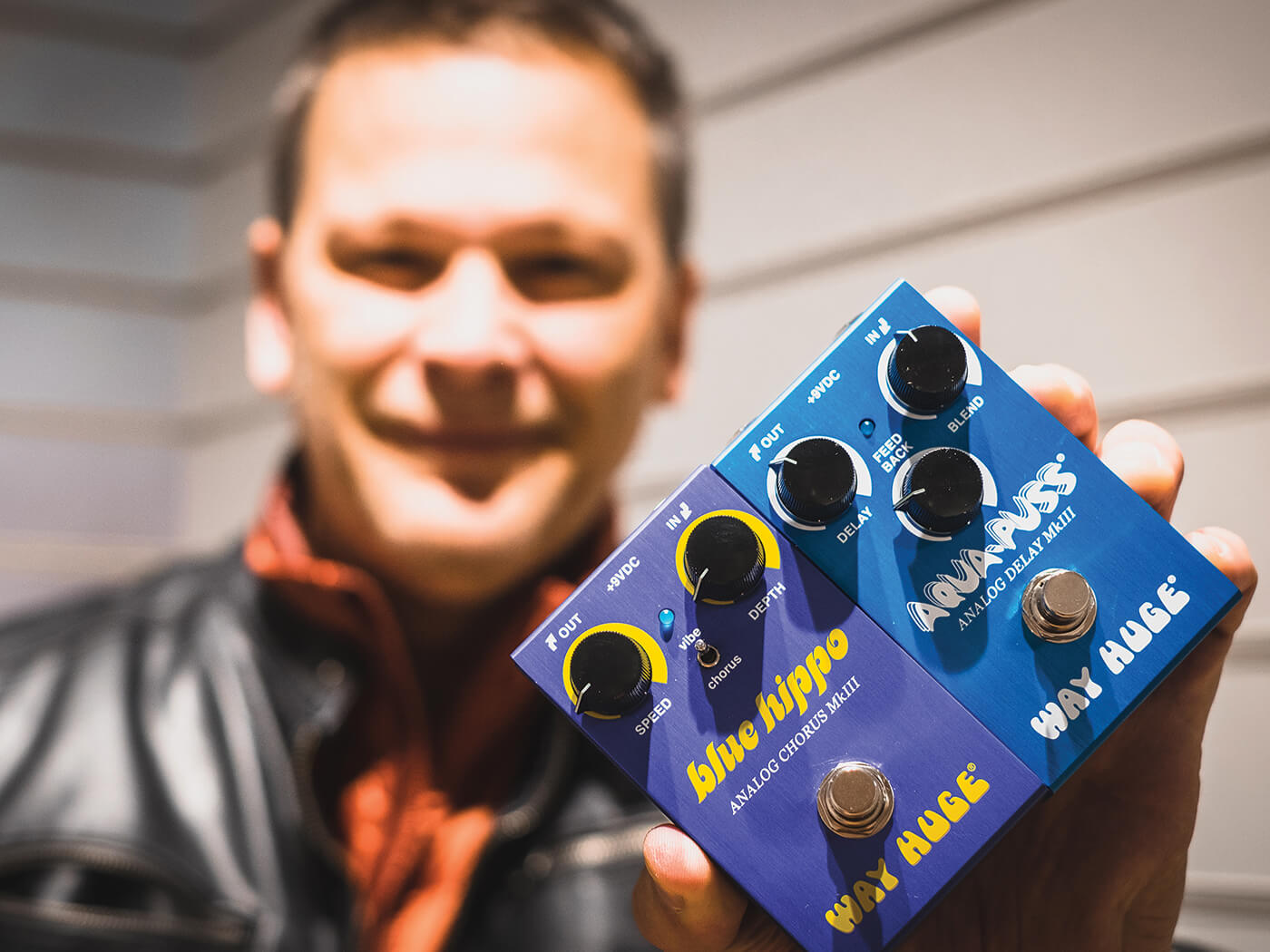 “I think they all know what they want – it’s their ability to articulate stuff,” he explains. “I remember working with Satriani. Before he went to Korg, I worked with him at Dunlop. He was very articulate, it was great. He’s like: ‘I hear 1K’ and I’m like: ‘Oh, cool! I can figure that out!’ Other people will be like: ‘More purple!’ That’s really the trick – it’s about how well they can communicate and how well I can understand.

“The Hendrix stuff was fun, ’cause we can make Fuzz Faces. We went up to the Experience museum and looked at the Octavia they had. Van Halen’s stuff was cool in that regard as well, it’s like cool, you used stuff that we made, we’re just going to make a special version for you. It would be great to work with someone like Jimmy Page, but I want what Jimmy Page used on Led Zeppelin II – ‘You used a Tone Bender and that’s what I want to see you use.’ I’m kind of a purist.”

How does a purist deal with modern safety legislation when it comes to designing new circuits? “You just don’t use stuff that’s problematic,” he admits. “Using old parts… we just don’t do it. Every now and again we do, but we know it’ll be a pain in the ass. We’ll have to strip lead off and it’s always going to cost a lot more money. You go: ‘Okay cool, I’m taking this old part, I’ve gotta go send it off to have lead taken off…’ which inevitably means stuff breaks, so you send out 1,000 pieces and get 800 back. Great. The small companies can get away with it, but we’re too big of a target.”

Although Jeorge is armed with a selection of new-for-2018 MXR and Dunlop pedals for tonight’s event, we wonder if he’s able to give us an insight into what’s on his workbench back in Burbank.

“What am I working on at the moment? I’m working on a nap!” he laughs. “We’re tight-lipped about anything coming out. Usually, I’m really far ahead. The stuff that’s coming out now, the stuff I have to talk about, I’m like, shit… we’re shipping this in a week and I forget how it works! It’s like a band having to rehearse their new record because they’ve forgotten how to play it. Same kind of thing. I’m a year ahead, I’m kind of done with stuff for Summer NAMM so I’m thinking about January 2019 already.”

Luckily, Jeorge’s rehearsals have paid off and he reels off a list of his latest designs to hit the streets. For 2018, the Way Huge mainman has been responsible for a series of pedals that are well, way smaller…

“This year, there was the MXR Sugar Drive, the 108 Classic Fuzz Mini – we just made it small because that old one was pedalboard-friendly when we did it probably eight years ago, but now people want tiny. I’m like, yeah, shrink it!” 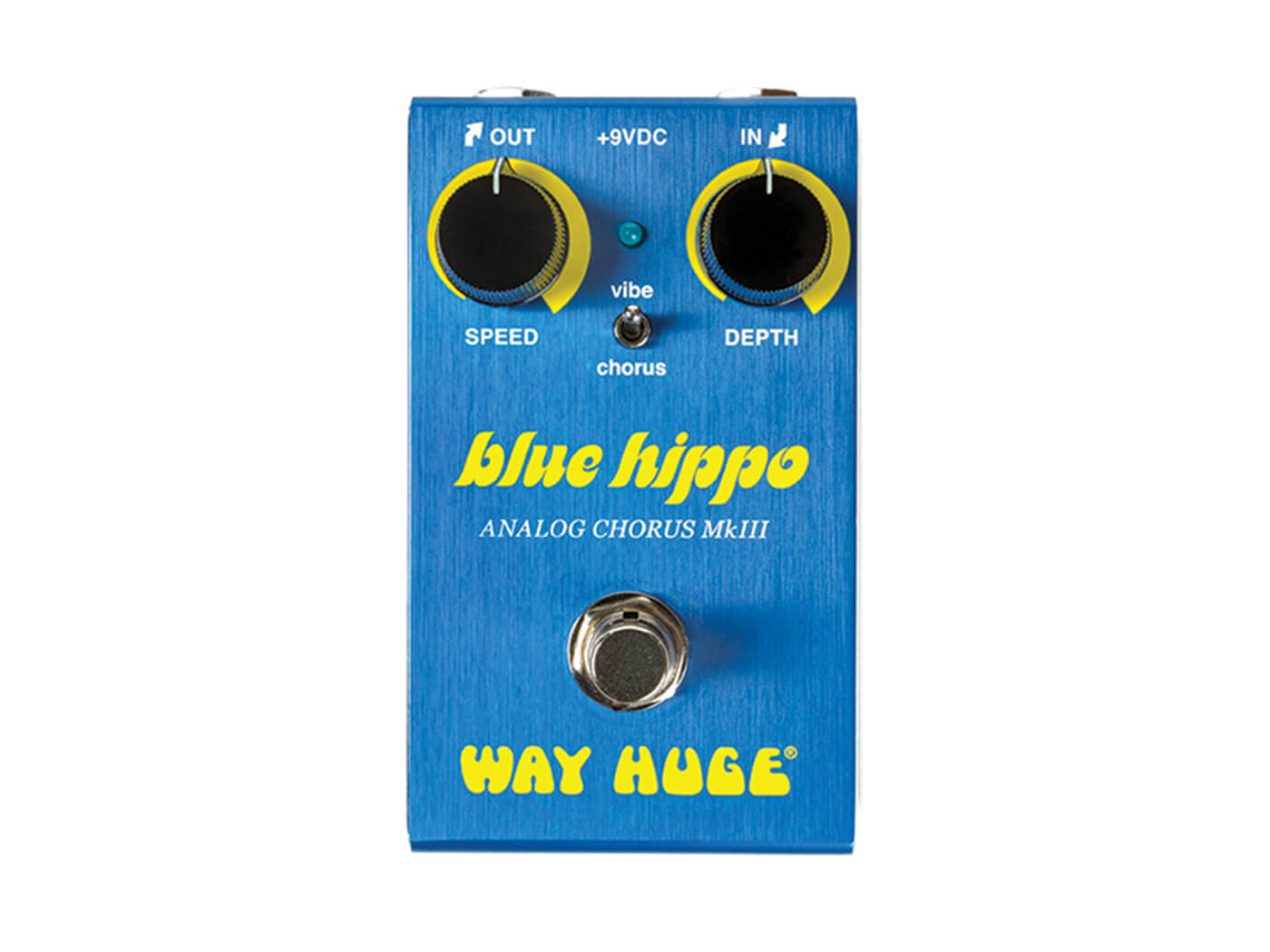 There’s also the Sugar Drive, MXR’s first Klone: “The Sugar Drive is our version of the… mythical overdrive!” Jeorge grins. “You guys can say the name. We try not to be so blatant, but it blatantly is. Everyone else is doing it so I’m like, okay. With Way Huge I did a line of smaller-series Blue Hippo, Aqua-Puss and Russian Pickle pedals.

Then we did a Cry Baby Mini 535Q Wah and the Pork & Pickle, which is the first Way Huge bass overdrive, which literally is the Pork Loin and the Russian Pickle in one box. Bass players really like that and you can switch between the two, but there’s no cascading. Everyone was like, why not? And it’s like, well, you’d have to have three more knobs, so it would have to be bigger!” 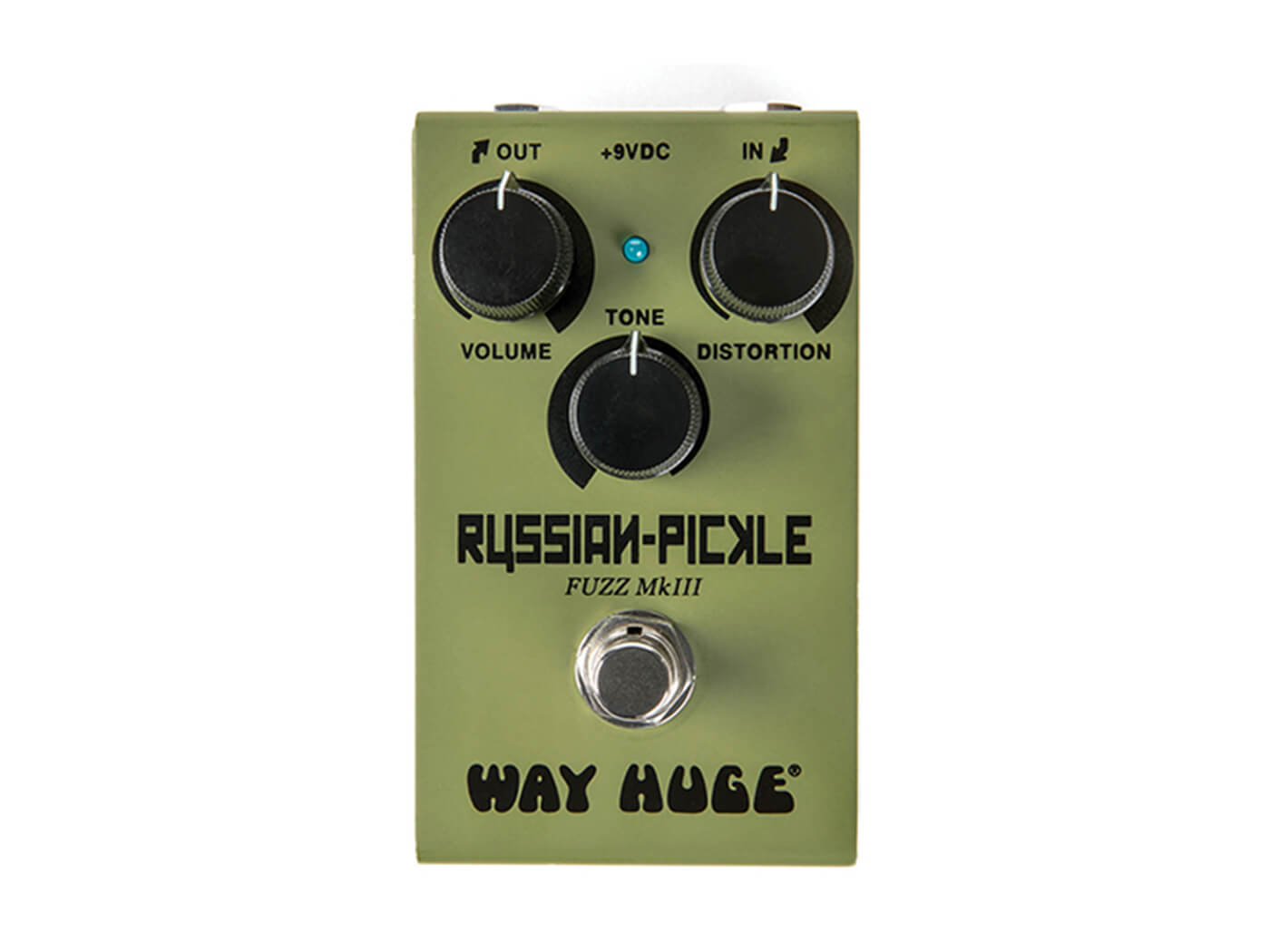 Finally, we ask Jeorge how an effects designer who was at the bleeding edge of modelling technology in his Line 6 days feels about the recent wave of do-it-all digital rigs from the likes of Kemper and Fractal: “I’m not anti-modelling, but the thing that has always driven me nuts is digital products that are deep,” he says. “It’s not that they are bad, but if you walk up to an amp that has six knobs and you plug in, twiddle those six knobs for a few minutes and don’t find anything you like, you’re done.” 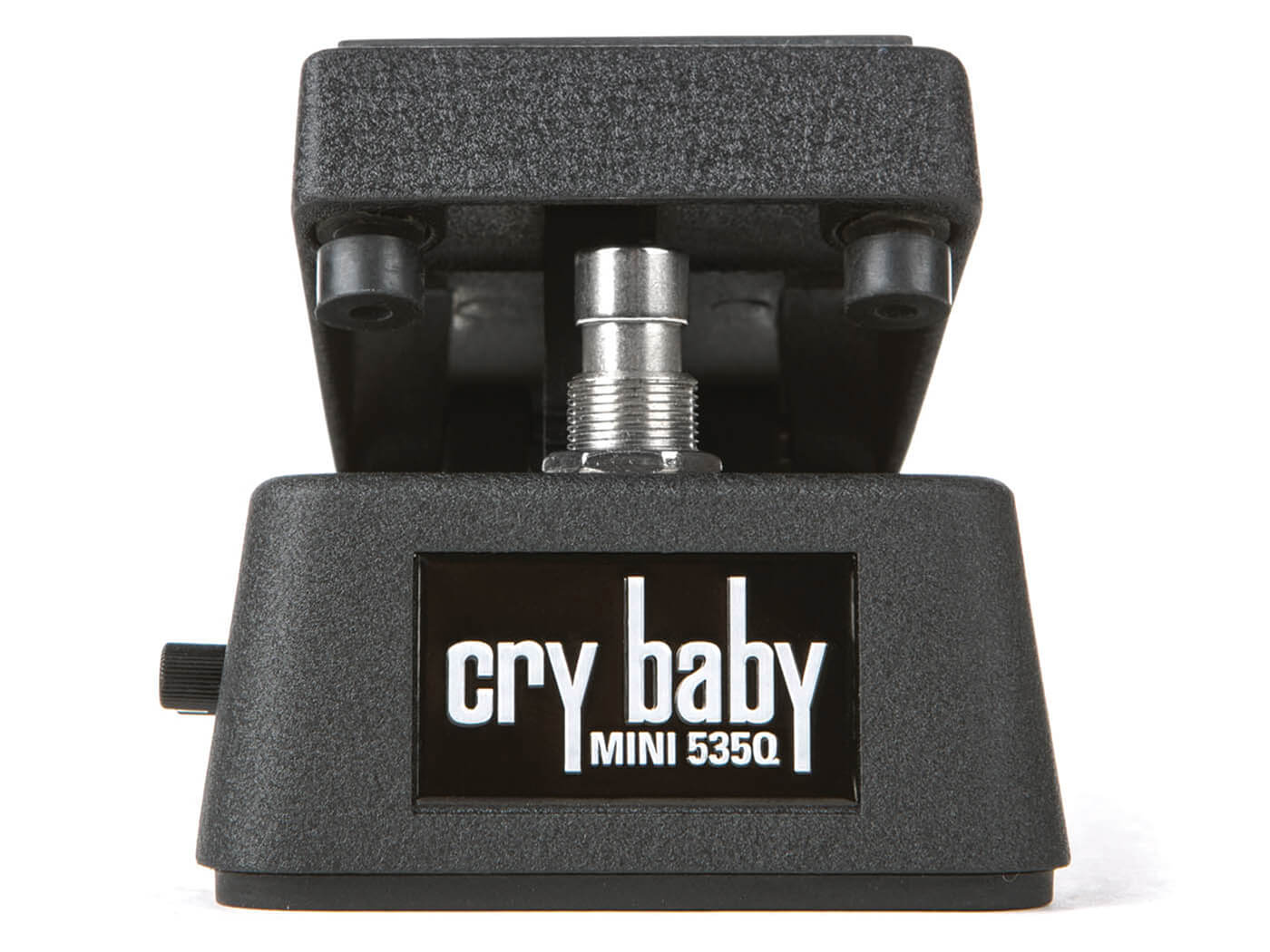 “On a modeller, whether it’s a Fractal or a Line 6 or a Boss or anybody… I’ve pitched people towards that stuff when they’ve been talking about a super-sophisticated rig that’s got to have lots of controllers and things that break. But very rarely are you able to plug into that stuff and just play. You’ve gotta deep dive and learn how to use it. It’s like getting a new cellphone – oh shit! I knew how to work this thing and now I’m starting all over…

“The beauty of the POD and the DL4 was that it was finite. But when you’ve got a display and you can go in deep… how many layers of this onion do I have to pull back until I’m happy? But for some people it’s great. It depends what you are trying to do.”