US builder Terry McInturff has been creating original and exquisitely crafted instruments for over 40 years, and counts the likes of Jimmy Page and Eric Clapton among his fanbase… 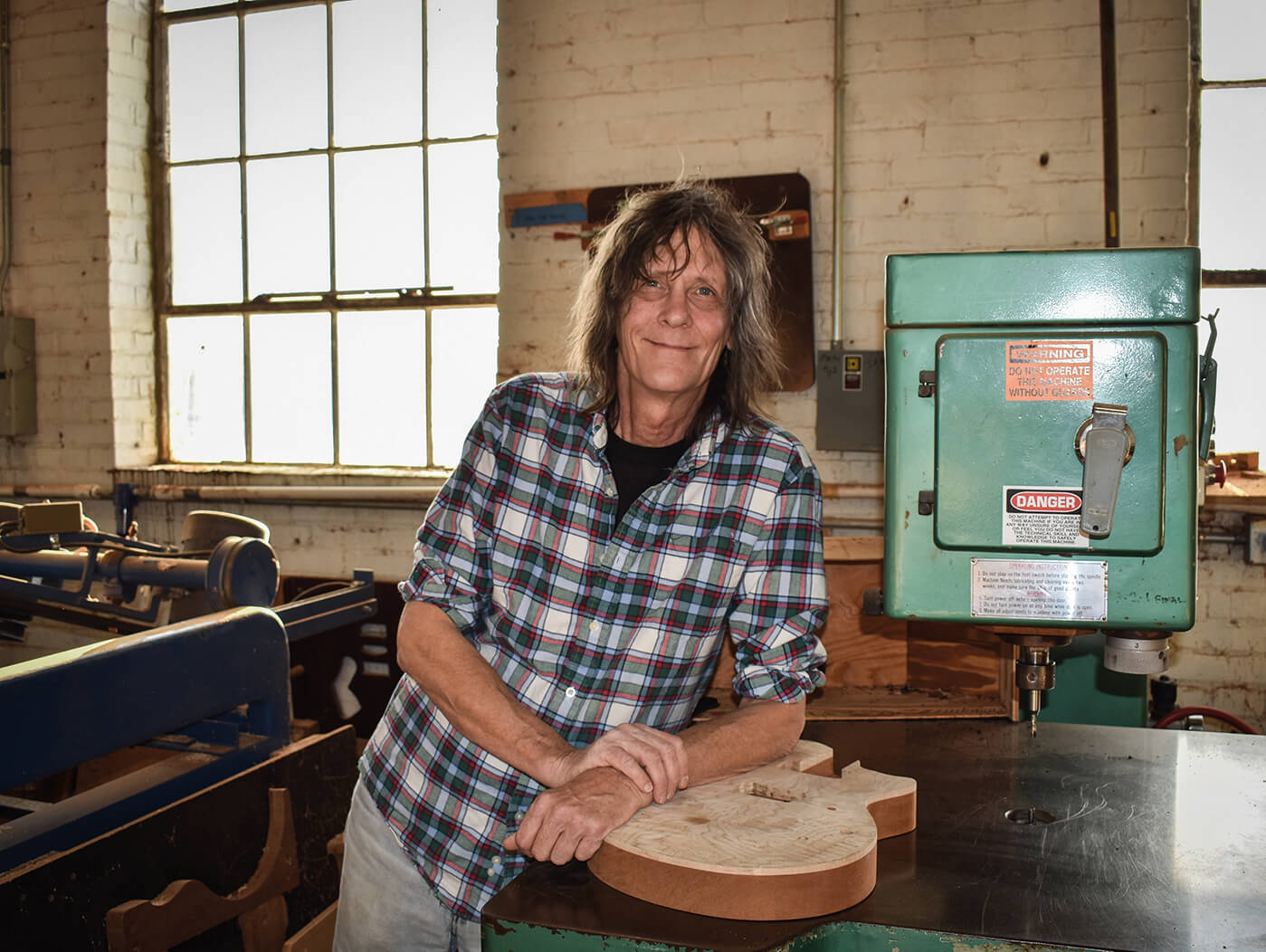 Like so many luthiers, repair and restoration work was Terry McInturff’s bread and butter during the early years

Anyone who plays a Terry C. McInturff guitar for the first time invariably has two reactions: “$@#* this thing is good!” and: “Why don’t more people know about this guy?” If his name is less recognisable than some of those posting relatively big sales numbers among the boutique-guitar crowd, well, Page and Clapton certainly know it… and this North Carolina-based builder’s reputation confirms he’s a peerless craftsman.

In addition – and here’s the truly admirable part – McInturff’s creations are resolutely and consistently original, reflecting his own time-tested take on what makes a great electric guitar, rather than some effort to merely ape the form and functionality that has gone before. He got there through a combination of artistry and experience, and a probing of his training ground and background – and where he has taken his skills since – is akin to a trek through the heart of the small-shop guitar industry.

Rock ’n’ roll radio has a lot to answer for, particular regarding its propensity for turning young minds toward the sordid pursuits of the electric guitar. Our hero is another who fell prey to its siren call in his youth, and never fully recovered. “I was raised in a Chicago suburb and fell in love with the sound of the electric guitar via that area’s AM radio stations,” McInturff tells us. “Upon moving to North Carolina and graduating high school, I wasn’t sure what to do, until I read about a man in LA who built and repaired guitars for all the stars. Bells went off in my head! I enrolled in an early class of the Roberto-Venn School Of Luthiery [in Phoenix, Arizona] in 1977. My first day on the job was January 8, 1978 and I’ve been full-time working with guitars ever since.”

Like many luthiers, McInturff brought in a paycheque in the early years by maintaining his own repair and restoration business, but start-to-finish building was always the objective – and he got a foothold in that effort pretty quickly, via some notable names in the business. In the early 90s, he was involved in a shop that subcontracted the manufacturing of highly regarded Ken Smith Basses. A few years later, when that shop was sold, he was hired by Hamer Guitars in Chicago as a custom builder, “although my duties expanded into a bit of product design, working with the artists, and so forth”, McInturff adds. “I liked the job, but could not fathom remaining in the Chicago area where their original facility resided. I missed North Carolina, moved back, and opened my own building facility under my own name. That was in 1996.”

Many budding luthiers build guitars largely because they just have the urge; the craft draws them in. For McInturff, however, while this was certainly true, it was essential that he brought something new to the table as well, and even the ever-admirable quest for ‘quality’ wasn’t quite enough. As he puts it:

“I think that one vital question that a builder has to be able to answer is: ‘Why should someone buy your guitar instead of someone else’s?’ Yes, I did want to bring extremely high build quality to market, but in addition, I wanted to bring the sounds I hear in my musical imagination to market as well. And I also wanted to bring my somewhat unique neck design. It sounds wooden and organic, is rock-stable, but doesn’t sound overbuilt, if I do say so myself!”

McInturff’s unique neck design was the end result of an effort to combat two problems long experienced by the necks of stringed instruments: instability over time, and the tendency to bow near the body joint, a place where the truss rod imparts no force to counter-balance string tension. Rather than over-reinforcing the neck (which, he says, greatly compromises its vital role as a “tone filter”), McInturff came up with a design-and-build regimen that defeats these two problems without sacrificing any of the tonal properties of the wood. “The result being that you can tour with the truss-rod cover on,” he relates. “I should have patented it, but back in the early 80s, I was too young, foolish and broke to do so!”

Looks-wise, while each of the several models McInturff has put out over the years displays very much its own aesthetic, they’re all easily ‘relatable’, too; which is to say, none requires the player to bend the imagination too far to accept the instrument as ‘an electric guitar,’ while still offering something entirely original in the design sense. Rather than being a conscious business decision, though, that’s just an ethos McInturff has grown into as a player himself. “Simply put, I build guitars that I want to play, and hope that others do, too,” he says. “I have a fair amount of live performance mileage under my belt, and experience as a recording engineer, too. Like many guitarists, I am rather conservative; I really admire those who really go for something radically new, but it’s not my personal nature, I suppose. I look at guitars as being tools, primarily.”

While the ‘rather conservative’ element within McInturff’s nature might make sense of any casual observation of, for example, his elegant, reworked-Les-Paul-like Carolina Custom model, it falls away just a little when this impressive guitar’s many painstaking details are observed up close. Peruse some of his more adventurous models, such as the the Spitfire and Spellcaster, and the understatement (some would argue) dives out the window entirely.

From McInturff’s perspective, the electric guitar is not simply a platform for electronics: it’s an acoustic instrument fitted with electronics. He acknowledges that pickups are very important, but insists the most they can do is to emphasise or de-emphasise aspects of what they are given, in the sonic sense; they cannot invent frequencies that are weak or absent in the acoustic signature. “This is why we see folks swapping pickups over and over in an attempt to make the guitar suitable,” he says. “Most of the time, if no success is to be had, it’s because the raw guitar cannot generate what is desired. It all begins with what the unplugged guitar sounds like.”

Expounding upon that, and by way of finding some means of working within that limitation, McInturff says: “The acoustical properties of even a solidbody place true limits upon what will be available to amplify and I actually think of my guitars as being acoustical instruments first. This is how I build a predetermined sound, by building the appropriate acoustical signature into the instrument via the various design elements and wood selection… I have to find the right combinations of wooden elements that’ll produce the right acoustical signature.

“That dictates, among other things, how fast the string will reach full energy, its ‘twang’; how long the string will vibrate, its sustain; what shapes the string will assume as it vibrates, its overtone series and more. An understanding of the role the acoustic signature plays goes a long way towards explaining why seemingly identical guitars can sound so different from one another. It is a huge topic.”

In addition to the guitars he’s built for Jimmy Page and Eric Clapton, he’s also created instruments for Joe Bonamassa, David Hidalgo, Brad Whitford, Audley Freed and others. For the maker himself, though, this kind of star-player uptake has been invaluable for its constructive feedback. “Sometimes, someone will just say a sentence or two,” McInturff says, “make a suggestion, and I am on the way towards making an even better tool. But it’s never-ending; I’m a lifetime learner who knows it takes more than one career’s-worth of time to know everything about even a simple Telecaster down to the molecular level. There’s no such thing as knowing it all, just as there’s no such thing as ‘the best guitar in the world’.”

At the other end of his acoustical approach to ensuring optimal tone, McInturff has pioneered alternative and upgraded electronics options, which he includes on many of his guitars. He still offers entirely traditional tone controls and that’s what many customers request for their own custom-builds, but as a player himself, he’s discovered the value of a more versatile and wider-ranging onboard EQ network – and he’s brought his experience with studio electronics to bear on the task, along with some inspiration from a bit of kit acquired from a legendary London recording studio.

“One challenge,” he says, “is there’s not enough room in a guitar to build in high-quality active EQs, filters, and a proper power supply. And so a passive approach with no batteries is best. I’ve worked on this for many years and the final iteration of what I offer is the Maxi-Q. It features two filters: a low-pass filter and a midrange contour filter, all with true bypass. The low-pass filter is a clearer version of the trad tone control and was inspired by the filter on the Harrison 34C recording console.

“The midrange contour filter is really useful and fun; it’s inspired by the inductor-based EQ found in my Raindirk Series 3 recording-desk modules that came out of Olympic Studios in Barnes, in South West London. The Maxi-Q is fast and easy to use, and gives you a level of organic-sounding control that I haven’t seen on an electric guitar before. It can do a lot, and the goal was to make it sound natural.”

After expanding staff and production numbers early in his run with Terry McInturff Guitars up to a capacity of making and selling 10 guitars per week, Terry decided he just wasn’t having any fun managing a business. He promptly downsized to what is mostly a one-man operation, and that’s where he stands today. As such, the rewards of the creative process beginning to end and of interacting directly with the clients, are all his – and that’s exactly how he likes it.

“My favourite aspect is that of working with a client in order to build a sound,” McInturff concludes. “I’m a people person and so that relationship is very, very enjoyable. I’ve had many clients over the past 40 years, yet I cannot readily recall a single bad customer.
I’m very blessed in that way! Strumming a newly completed guitar for the first time is always going to be a favourite moment, when I hear that I have indeed built the sound. I usually play it unplugged for a while before plugging it in… those are good times.”