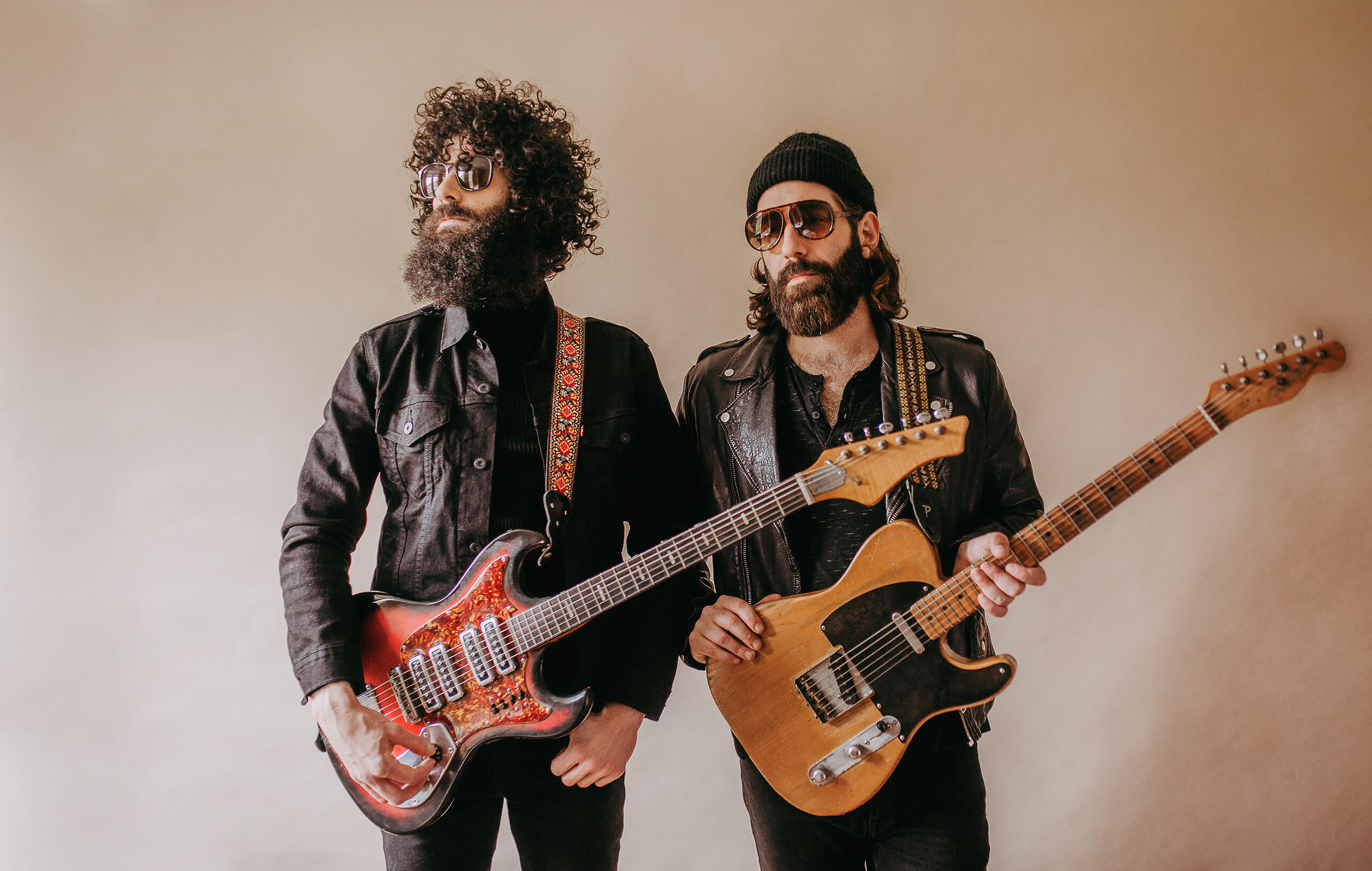 The blues guitar duo on channeling the spirit of ‘punk blues’, their love for esoteric vintage guitars, and why they should like guitar solos more than they actually do.

Remakes have a bad rep, and they largely deserve it. “But the zombies are fast in this one,” isn’t much of a hook, and it’s still better than a shot-for-shot slog through a classic that adds nothing to the conversation except a dash of lurid colour. Into this tangle of thorns walk GA-20, whose new record might have fallen into the second camp had it not been executed with so much care and attention.

Try It…You Might Like It! finds the Boston blues trio – guitarist Matt Stubbs, guitarist-vocalist Pat Faherty, and drummer Tim Carman – setting their sights on the midwest in order to rekindle the magic of Chicago bluesman Theodore Roosevelt ‘Hound Dog’ Taylor and his band, the Houserockers. In 10 songs they seek to do justice to the lean, mean, all-live spirit of Hound Dog’s 1971 self-titled LP – which launched the legendary Alligator Records and was produced by its founder Bruce Iglauer – and its follow up Natural Boogie.

“I’ve always been really into traditional Chicago blues, dating back to before Hound Dog and all the way up to the early 70s, and that stuff that he did,” Stubbs says. “What speaks to me about it, especially those three guys in the Houserockers, is that when they play together it’s like an ensemble thing. When Hound Dog plays a screaming note, Ted Harvey on the drums reacts to it. There’s a lot of interaction going on there, and sometimes in the blues, depending on the style or era, they don’t always do that. Even though it sounds crazy and bombastic, the more you listen to it you realise that they’re playing as a group, almost a jazz approach.” 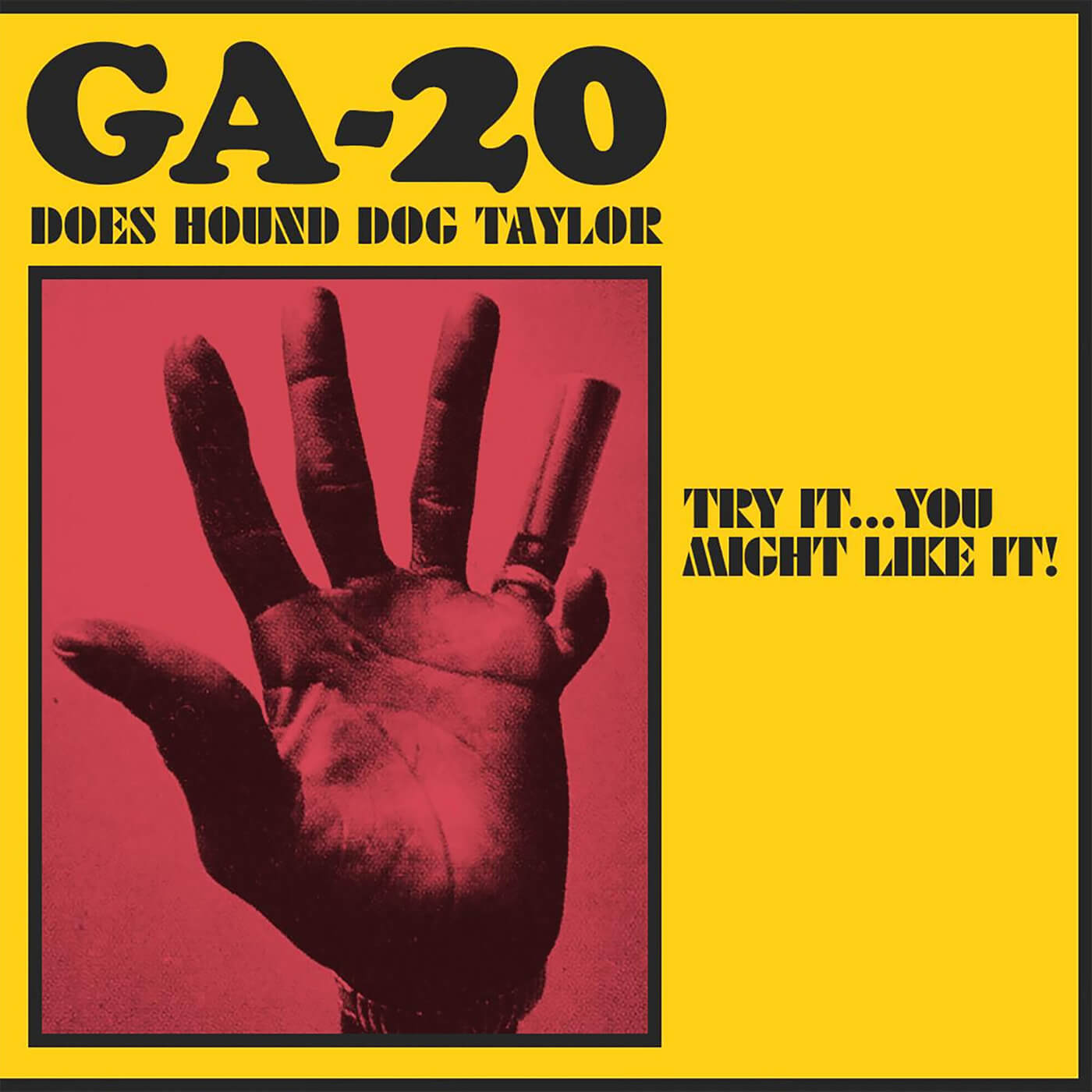 The Houserockers’ take on the blues – with a second guitarist, Brewer Phillips, in place of a bassist – is mirrored in GA-20’s own setup and their philosophy. The group formed in 2018 when Stubbs, who plays in Charlie Musselwhite’s touring band, was staring at a year off while the harmonica legend toured with Ben Harper behind their joint LP No Mercy in This Land. “Pat and I were buddies and I needed to do some local gigs,” he says. “To be honest it was, ‘Let’s just do a trio so we can make more money.’

“I loved all these old Chicago blues records and a lot of them didn’t have bass. It was two guitars and one would play something like a bassline. Going forward, we arranged stuff to fit. Live, Pat and I both use two amps. We’ll have a cleaner, fatter, more low-end amp on the bottom and stack on top of that a small tweed amp, get your hair and your distortion out of that.”

Three years along the line GA-20 are, as their beginnings would suggest, a well-drilled live outfit who play loud, lean songs steeped in the Chicago style, eschewing the flabby middle of their contemporaries. Robert Christgau once called Hound Dog and the Houserockers “the Ramones of the blues” and GA-20 are also driven by a desire to keep things sharp and to the point. “I’m a guitar player so I’m probably supposed to like solos more than I do,” Stubbs admits. “Pat and I joke about it.”

“If we have a 60-minute set we do 22 songs,” he continues. “If we’re at festivals, a lot of the more modern blues stuff is just a platform for a really long guitar solo. It’s a slow blues, and here we go. It’s going to be 15 minutes. That’s great if you want to hear all the fireworks for a long time. We prefer to play songs. I’d rather do a three minute song and have it be catchy and have a mood to it. Maybe there’s a solo, maybe there isn’t. All the old blues was like that.” 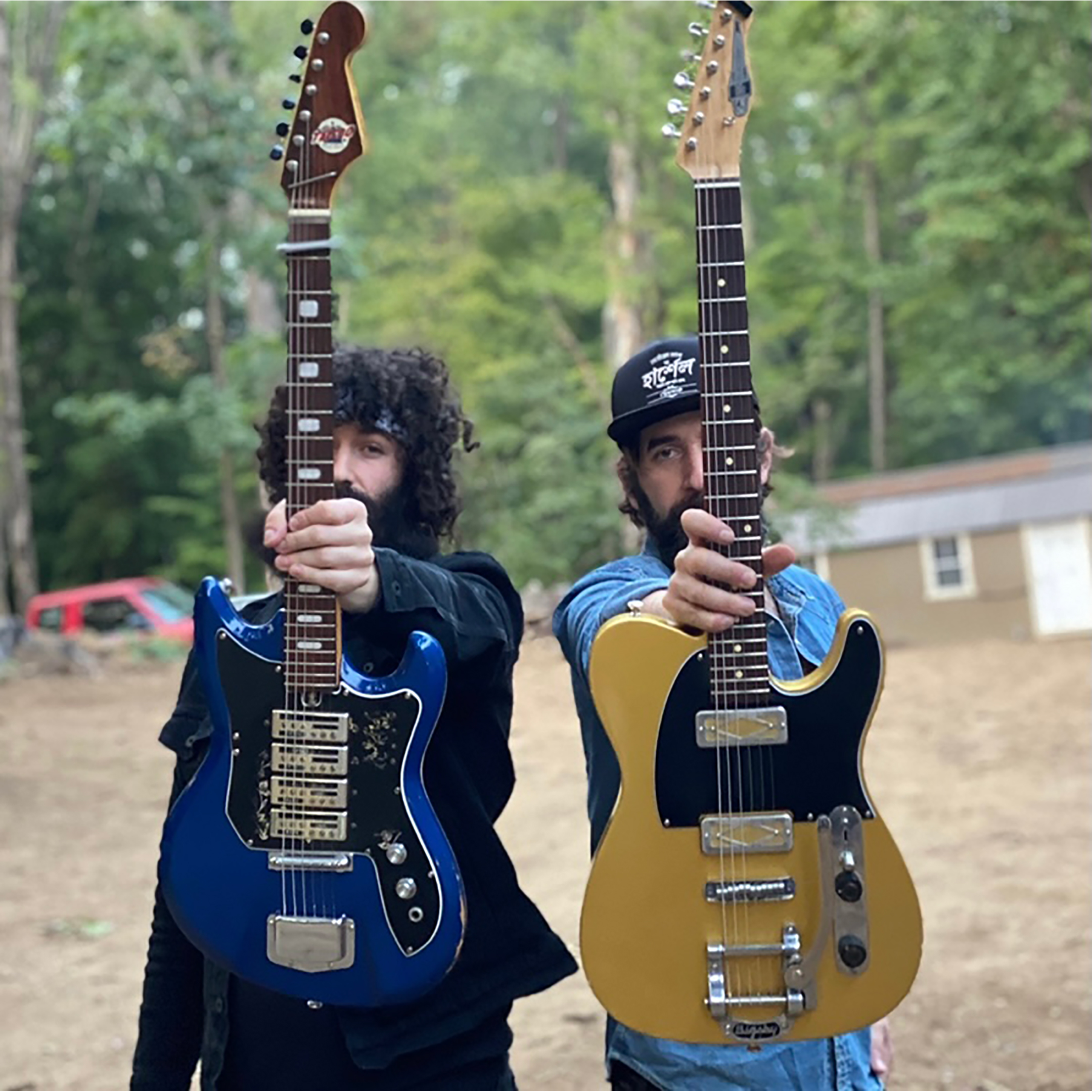 Give it a try

The group’s retro 2019 debut album Lonely Soul prized the chemistry and dynamic shifts that can be created by a well-calibrated trio, and the solid nature of its construction works in their favour when playing things fast and loose on Try It…You Might Like It!. Their chops and cohesiveness were put to the test over two days of live tracking at Stubbs’ studio that were designed to mirror Hound Dog’s own blueprints. “We rehearsed weekly for two or three months during the pandemic,” Stubbs says. “Luckily it was nice out so we just did it on my deck quietly and got everything arranged.

“The actual recording process, we went into the studio and I tried to come at it like those guys. I talked to Bruce from Alligator and asked him what they were using for gear, what was the setup, how was the workflow. From what I understand, they went into a studio and played like it was a live gig. It was all set up in a room, they didn’t have headphones, they played loud. I think it was just two tracks to tape. So that was what we went for. We didn’t do a bunch of takes of each song, maybe two passes, three passes. As soon as it felt right we just moved on. We recorded that whole record in a day and a half. It was real minimal, no overdubs.”

As you might expect from a band named after a vintage Gibson tube amp, they viewed the hardware that would help bring these songs back to life as a vital element in their planning. Faherty and Stubbs set about finding a handful of Teisco and Kingston guitars to match the instruments that Hound Dog leaned on, with Stubbs also matching a vintage Telecaster to Phillips’ contributions. “Pat and I just did what I think a lot of guitar nerds do – we spent a lot of time on the internet looking for deals,” Stubbs says.

“I’ve always been a gear guy. I’m into vintage gear. Any guitar I own that’s new is inspired by a vintage guitar too”

“I think we bought three or four different ones. Teisco had different pickups, right? A lot of people are hip to the gold foils. We bought a couple like that and quickly realised when we started looking at pictures and talking to Bruce about Hound Dog that he actually used these weird rectangle-looking pickups. Pat bought two different guitars with those in them, and we just A/B-ed them. It was pretty clear right away which one sounded just like Hound Dog. We got all those guitars really cheap, too. I don’t think we paid more than $300 for any of them. Pat has two left. He sold the ones he didn’t like.” 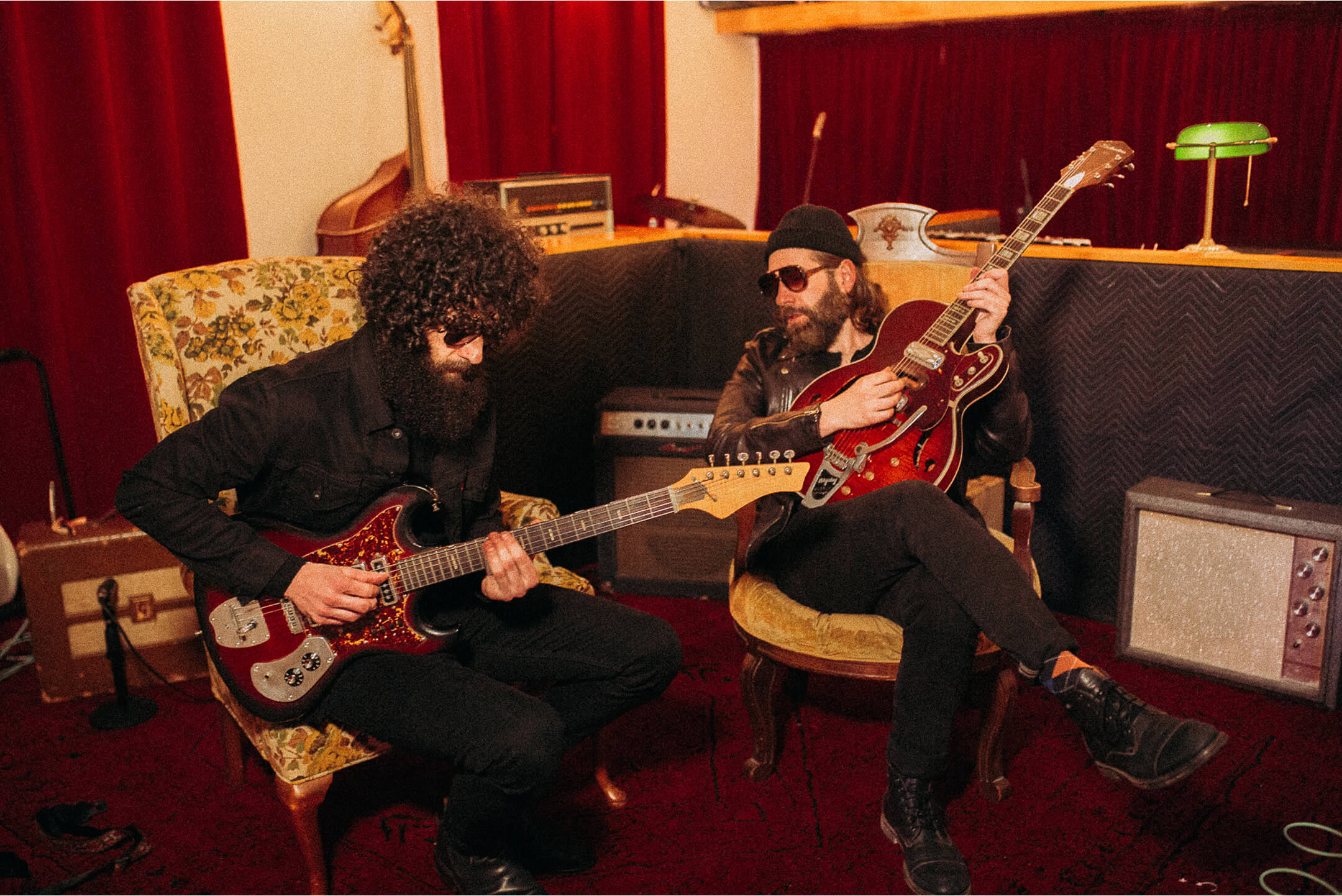 Stubbs tried not to ‘produce’ the record in the traditional sense, preferring to maintain an air of simplicity in order to preserve the spirit of the endeavour. But one area that he opted to have his own say, chiefly from the perspective of a long-time Hound Dog listener, was in the amp setup and its ability to add a little more warmth and ballast.

“Pat used a little five-watt Silvertone. Hound Dog used a big Silvertone with six 10″ speakers. I have one like that but the studio we used is pretty small,” he says. “I wanted to have an amp that we could control a little bit in the room. The first day I had that and a couple of other Silvertones, Pat went into his side of the room and played slide, we’d just record, listen back, A-B it. I wanted to have the character that Hound Dog had, but I wanted it to have a little bit more low end.

“I love Hound Dog but if I listen to two of his albums back to back sometimes my ear gets a little fatigued. There’s so much top end. I played through an old Gibson GA-20. That one always sounds great. That took two minutes to set up—plugged it in and turned it on. We set up like we do live, and put one baffle behind each amp so it didn’t bleed too much into the drum mics.”

While it’s easy to see this attention to gear detail as a necessary offshoot of recreating another artist’s sound, it also says plenty about GA-20 as musicians in their own right. Stubbs first played a black American Standard Stratocaster and learned the ropes in the wake of his guitarist father, skipping from the eye-opening riff of Lenny Kravitz’s Are You Gonna Go My Way into Hendrix before falling down the blues rabbit hole in his mid-teens. Quickly, though, he came to appreciate guitars as more than tools of the trade. GA-20’s own material feels lived in and appropriately weathered, and that current in their sound is rendered by a deliberate set of equipment choices.

Live, Stubbs calls on a 1960s Silvertone 1454, a 1964 Fender Jazzmaster and a Telecaster through a 1965 Fender Vibrolux Reverb and, you guessed it, a 1960 GA-20. Faherty, meanwhile, pairs a 1950s Harmony Stratotone Newport with a 1966 Fender Pro Reverb and a modified Fender Pro Junior with a 12 inch speaker, calling from time to time on a supporting cast of Jazzmasters, Teles and Teiscos.  “I’ve always been a guitar-gear guy,” Stubbs admits. “I’m into vintage gear. Any guitar I own that’s new is inspired by a vintage guitar, too. Guitars were always important, they all have their own character.”