As the Auckland band release their much-anticipated sophomore record, guitarists Elizabeth Stokes and Jonathan Pearce tell us about how they ditched their jazz destiny, terrible self-modded guitars, and the search for “ultimate jangle”.

“The theme of the album is… songs I wrote,” Elizabeth Stokes says, before collapsing into laughter. The Beths‘ vocalist and guitarist is discussing their new power-pop opus Jump Rope Gazers, which casts a roving eye over a freewheeling couple of years for the Auckland quartet. “It’s a little scattered,” she observes.

“But then you look back and you can see threads – that mid-20s ‘missing your friends because everyone moves away’ thing, which is tied in with us being away from people when they’re going through stuff. Things happen to your friends and family and you’re not there. That’s difficult to reckon with.”

Prior to the release of the band’s eye-catching debut LP Future Me Hates Me, the Beths suited up for a marathon bout of touring that set the seal on their status as a going concern. Stokes booked shows across the US and Europe, quitting her day job as a music teacher and shoving the band into the unknown for the next 18 months.

In May 2018 they played the 200 capacity Victoria in Dalston. Twelve months later it was the 500 capacity Dome in Tufnell Park. Their next London show, in April 2021, will be in front of over 2,000 fans at the Kentish Town Forum. That first tour was a leap of faith that changed everything. “We were much better friends by the end of it,” guitarist Jonathan Pearce says.

Picking up the thought, Stokes adds: “The biggest thing to come out of it was a culture change, which I think started when our original drummer [Ivan Luketina-Johnston] left and we had Katie Everingham join us for the first couple of tours. She was a positive force, and proactive when it came to communication and talking about mental health. Without that, I don’t know what the band would look like now. She introduced a new culture that’s stuck around even after having different personnel.”

The Beths formed five years ago, orbiting Stokes’ fizzing pop writing. She and Pearce studied jazz at university – on trumpet and piano respectively – before coming to yearn for the camaraderie and DIY ethic of their hometown’s vibrant indie-rock scene. “I loved learning about music, but I missed lyrics,” Stokes says. “I was playing the trumpet, and communicating in melody and improvisation, learning a lot of repertoire. I was missing songs, and being able to express myself that way. I was nostalgically missing the guitar music that I grew up on. I was like, ‘I’m going to start a rock band.’ Maybe Jonathan was a little more dissatisfied with studying.”

He was. “I was dissatisfied with piano, as well,” he admits. “I think it’s an amazing instrument, but you hit the note and the second you do that’s the best it’s ever going to sound. Then it fades, sometimes in a pretty unceremonious way. The people around me were able to do cool glissandos and bend notes, but it’s all trickery. It got to a point where I could see the way forward was immensely technical. That didn’t interest me as much as playing guitar in a rock band.”

Stokes initially learned to play in the same sort of subsidised school lessons she’d later teach. Taking her “shitty classical guitar”, she busked Death Cab For Cutie and Rilo Kiley songs with her best friend at the local mall. Pearce, meanwhile, was a Radiohead junkie who obsessed over tabs with his Ibanez package deal guitar and amp. “I was a teenager with idle hands,” he says. “I thought it would be a good idea to change the shape of it and put different pickups in, re-paint it with some terrible spray can technique. It’s got a finish that looks a bit like an orange.” 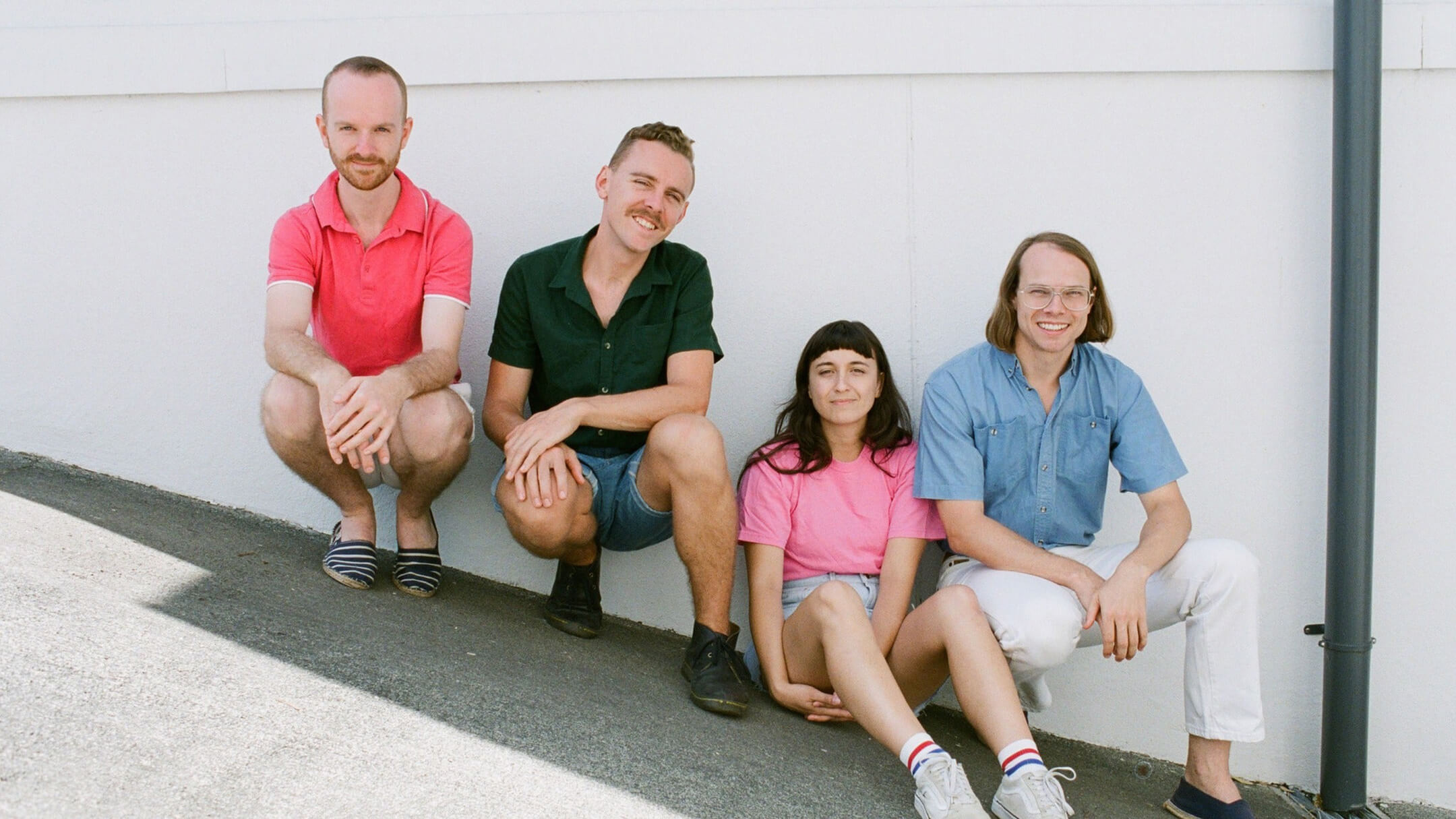 The Beths arrived almost fully formed on their 2016 EP Warm Blood, with Stokes’ immaculate melodies offset by buzzsaw distortion and four-part harmonies as catchy as they were complex. Future Me Hates Me doubled down on that formula, offering sharper production and an all-or-nothing live show that bolstered their studio work with easy humour, added tempo and high-wire chops. Jump Rope Gazers is very much the next step in that journey, adding gauzy dream-pop to the mix and moments of calm amid the hooky maelstrom.

“I thought it would be a good idea to change the shape of [my ibanez], re-paint it with some terrible spray can technique”

“I still write on my own,” Stokes says. “That process wasn’t much different apart from the fact I only really wrote when we were between tours. After that, the process changed in terms of being a little more collaborative. After touring together a lot the vibe in the studio and when arranging the songs was better. We’ve had to learn how to communicate properly after being in such close quarters for extended periods of time.

“The melodies and the lyrics are there right at the start, and I still like writing backing vocal parts so those tend to be in there already, but I have become more comfortable in leaving the demos a bit sparser. I don’t need to write bass parts and drum parts, because what Ben [Sinclair, bass] and Tristan [Deck, drums] write is going to be better than what I could write. We’ve got an EP and album out, so we can reference ourselves in terms of what makes sense.”

And while Jump Rope Gazers might sound more reserved than its predecessors, its construction remains an exercise in heavy engineering. “None of us really subscribe to any sort of minimalism in music,” Pearce says. “Another way to have made this album would have been to do sessions while we were on the road overseas, in big studios with another producer. But in that situation some of those decisions, to make sonic or creative changes, might have felt forced, or inorganic.”

Pearce once again produced the record, with Stokes stepping in to look after vocal treatments. They tracked the bulk of the LP live in their rehearsal space, meshing that spontaneous energy with overdubs as required. “It was still just the four of us in a room choosing guitar sounds, working on arrangements, and following our guts,” Stokes says. “I don’t think it’s sparse. There’s a lot going on. There’s a lot of guitars layered up. It still felt like us listening to a song and figuring out what needs to go where, or what’s missing.”

Stokes relied heavily on her G&L Tribute Fallout during recording, with Pearce doing the same with his 70s Les Paul Deluxe. “That is a very, very loved guitar,” he says. “Sometimes it’s a struggle not to use that for everything.” At this point Stokes counters:

“The player of the match for us was a Jerry Jones Neptune we borrowed from our friend Anthony [Metcalf, their booking agent).” “Ultimate jangle,” Pearce agrees. 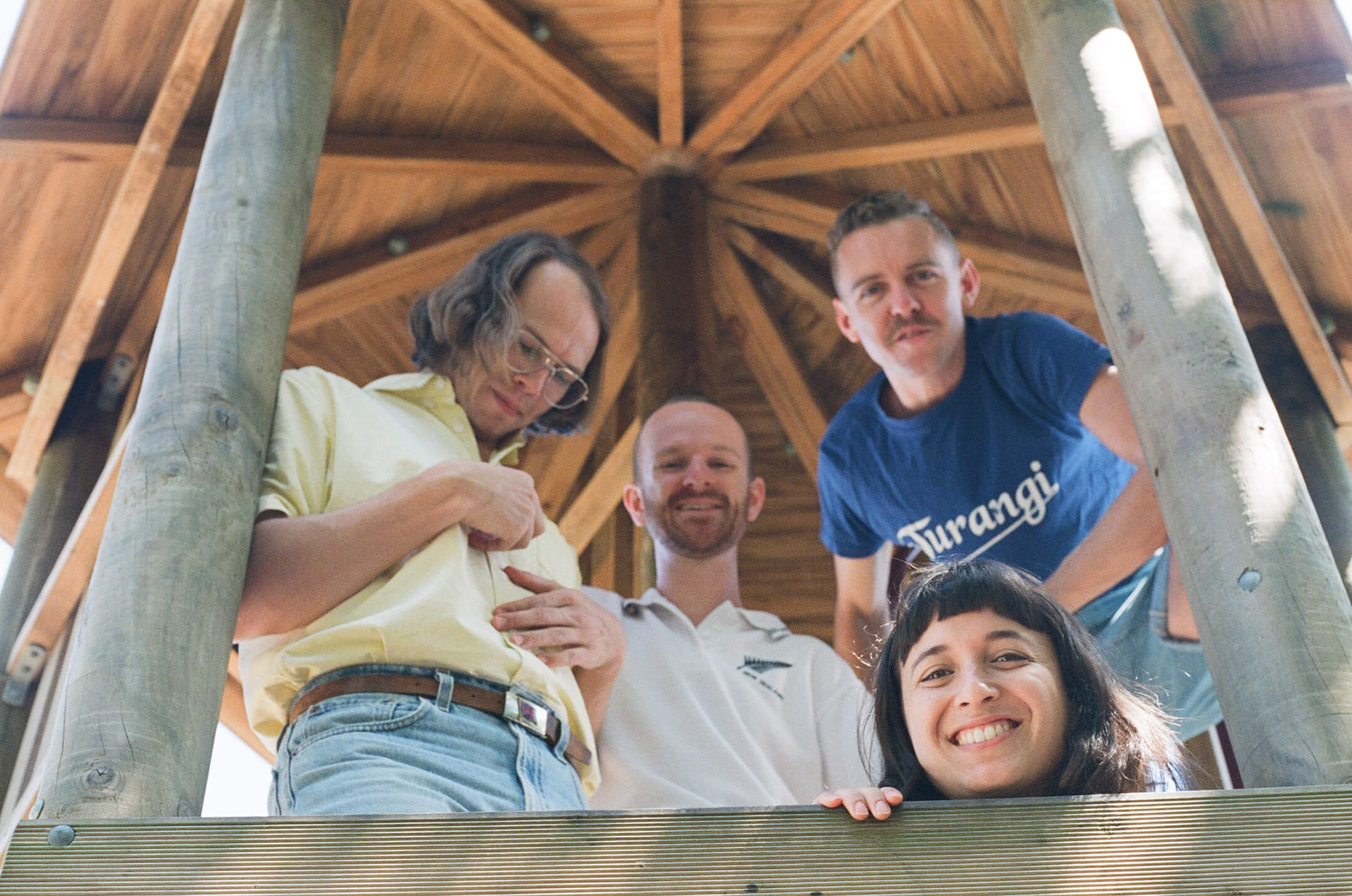 The amp tones dotted across Jump Rope Gazers offer a little excursion into New Zealand’s unique guitar history. “In the 60s there were import restrictions, which meant that if you wanted to get a Fender or a Vox amp it was extremely expensive,” Pearce says. “But local manufacturers made a good amount of amps that are still with us today. We’ve picked up a few over the years – a 50-watt Fountain we use for bass, and one Fountain Mustang 30-watt that I use for a lot of my guitars. Liz’s guitars were often through a pair of Jansens, a 15-watt and a 30-watt.”

Shaking things up a little from their setup on Future Me Hates Me, Stokes and Pearce allowed a few more pedals to darken their doorway. “The first record was quite down the middle, a couple of overdrives in series, and then maybe a really over the top distortion,” Pearce says. But here they branched out, augmenting their go-to ProCo RAT with a couple of Mad Professor Little Green Wonders, a Crowther Hot Cake, a Wampler Plexi-Drive and a Chase Bliss Warped Vinyl for that dream-pop goodness. “That was a splash out, I felt a bit bad for buying that, but it’s worked its way onto a lot of cool stuff,” Pearce admits.

Jump Rope Gazers opens with I’m Not Getting Excited, where Stokes interrogates her experiences with impostor syndrome over exhilarating fuzz-pop. The song situates the Beths in the here and now as they prepare to issue a headline-grabbing record and play a sold-out hometown release show in their native Auckland’s iconic Powerstation venue (something very few bands outside of New Zealand will be doing any time soon).  “It’s a relic for me that’s still there, but a lot gentler than it used to be growing up,” Stokes says.

“I try not to get too excited about things in case they go away. This is why it’s so nice to share successes with other people. We sold out this Powerstation gig, and it’s a big venue that we’ve never headlined before, in under a week. I was very ready to just move right past it but Anthony was like, ‘We should celebrate the wins, because you don’t know when they will stop’. That was nice, and to be able to share that together as a group is an antidote to me sputtering around in my anxiety.”

Jump Rope Gazers is out now through Carpark Records.