Guitarist Paul Gregory explains how the Newcastle band have returned with the most potent distillation of their atmospheric dream-rock sound yet.

“The idea of playing without a reverb pedal seems odd to me. It’s the most beautiful thing I’ve ever heard, a clean guitar with reverb. I could play that for hours…” Lanterns On The Lake guitarist Paul Gregory is explaining the ethereal sonic DNA at the heart of the Newcastle band’s fourth and already most successful album, Spook The Herd.

In equal parts cinematic and melodic, Gregory’s playing is integral to the evocative dynamics of a record that swells and soars with a dreamy post-rock grandeur, while sounding an end-of-the-world address to a populous sleepwalking toward oblivion. The southpaw guitarist is one of the growing new breed of players who use the instrument as a textural tool. Employing tremolo picking, bowing and an arsenal of carefully chosen effects, Gregory’s developed a distinctive visceral style, influenced by Jonny Greenwood, Nick McCabe and the band’s Bella Union label mates and former touring partners Explosions In The Sky.

“The guitar has had to evolve from being the main instrument in a lot of music to something that can be used in very different ways,” he says. “A lot of what I do is influenced by string parts. I can’t twiddle like Van Halen, despite years of trying, and people don’t necessarily want to hear that anymore anyway. I feel the guitar will always be there. I’m excited to see where it’s going to go.”

A decade and a couple of line-up changes into their career, Lanterns On The Lake are going places, too. Gregory, singer/guitarist Hazel Wilde, bassist Bob Allen, drummer Ol Ketteringham and viola player Angela Chan saw Spook The Herd gate-crash the top 20 in the midweek album charts, while being embraced by BBC 6Music and the wider British music press. It’s a hard-earned reward for the band, whose stirring soundscapes and tales of the minutiae of life in a country that’s lost its way have struck a chord. 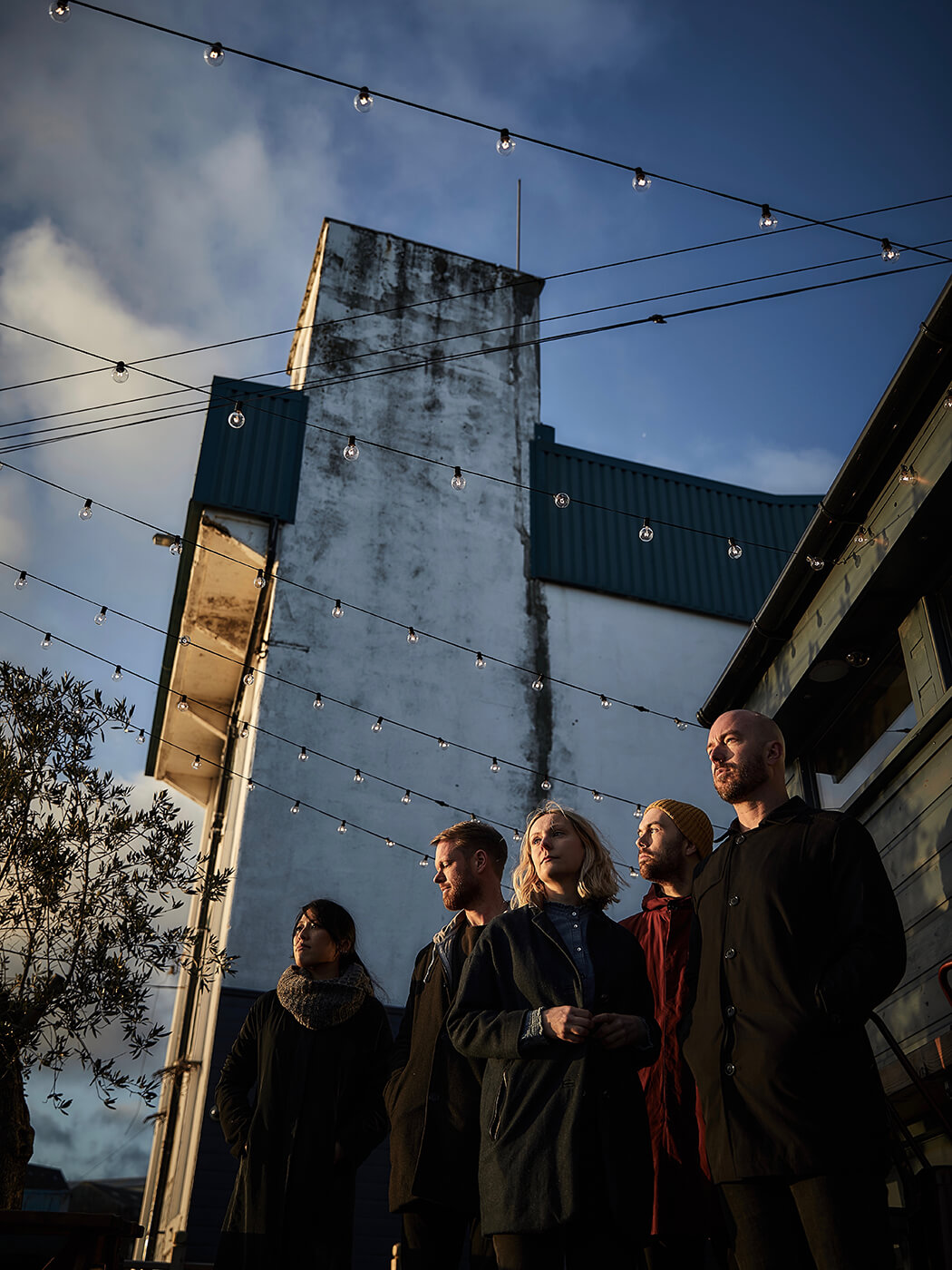 The album arrived after a lengthy hiatus that Gregory describes as “necessary”. The tour for Spook The Herd’s gloomy 2015 predecessor Beings started with a huge celebratory show with Royal Northern Sinfonia at Gateshead’s Sage and ended a year later with the band physically and emotionally drained. After completing the follow-up in early 2019, Wilde and Gregory fell pregnant with their first child, Alice. They decided to delay the release of Spook The Herd until February 2020.

“Being away for five years is a long time,” says Gregory, “Especially now when in the music world people move on really quickly. A lot of people maybe thought we’d split up, but the reaction has been overwhelming.”

Despite being an album cloaked in existential fear – Wilde tackles climate change, social media polarisation and the rise of populist politics with her most incisive writing yet, recording was a joyous experience. It also saw Gregory relinquish production duties for the first time, to Joss Worthington, the band citing Nirvana’s In Utero as a sonic touchstone. 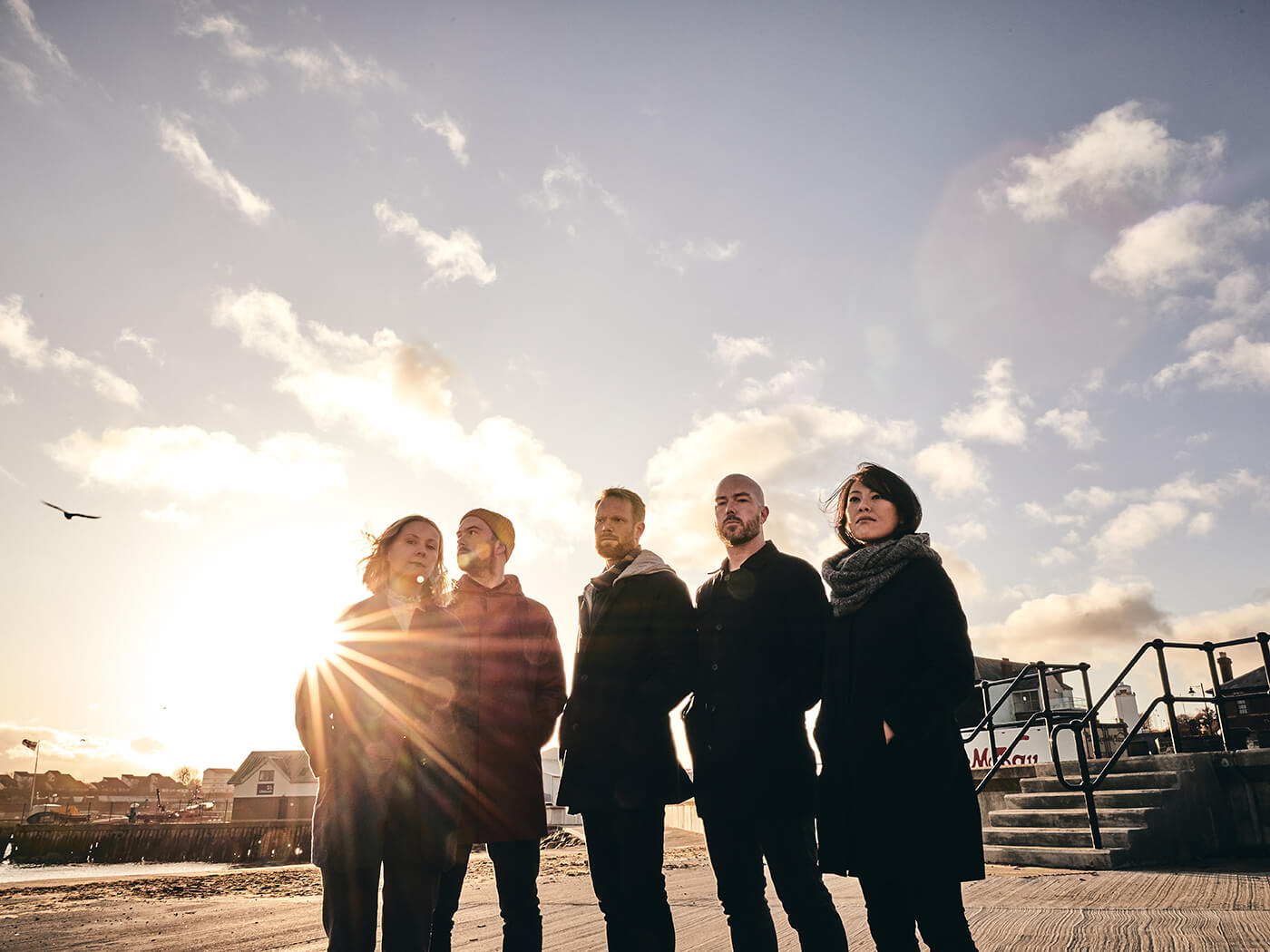 Decamping to Worthington’s Distant City Studios in Yorkshire, Lanterns were rejuvenated by the pastoral location – and the restorative qualities of the nearby Old Bridge Inn. The guitar-centric, streamlined songs on Spook The Herd bear witness. Gregory’s coruscating tremolo-picked wash on opener When It All Comes True quickens the pulse thrillingly, while his mangled solo on lead single Every Atom, achieved by altering the tap tempo on an analogue delay while playing it, is one of the oddest, most distinctive things you’ll hear coming out of a guitar this year.

“It was the most fun we’ve ever had making a record,” says Gregory. “Memories we’ll have forever. I’ve been trying not to be the producer since Until The Colours Run [2013].

“On the other albums, my guitar parts were chucked on at the end because I didn’t have time to work anything out, this time I was in the control room with my pedalboard and a cup of tea, and my amp up crazy-loud in another room. It felt like being part of the band rather than this weird, tired beast.

“On Beings, the piano was the main instrument, there’s a lot of bowed guitar and textural stuff, a huge reverby noise. For large proportions of the songs, I’m playing three notes, whereas Spook The Herd was more about creating little hooks and melodies.” 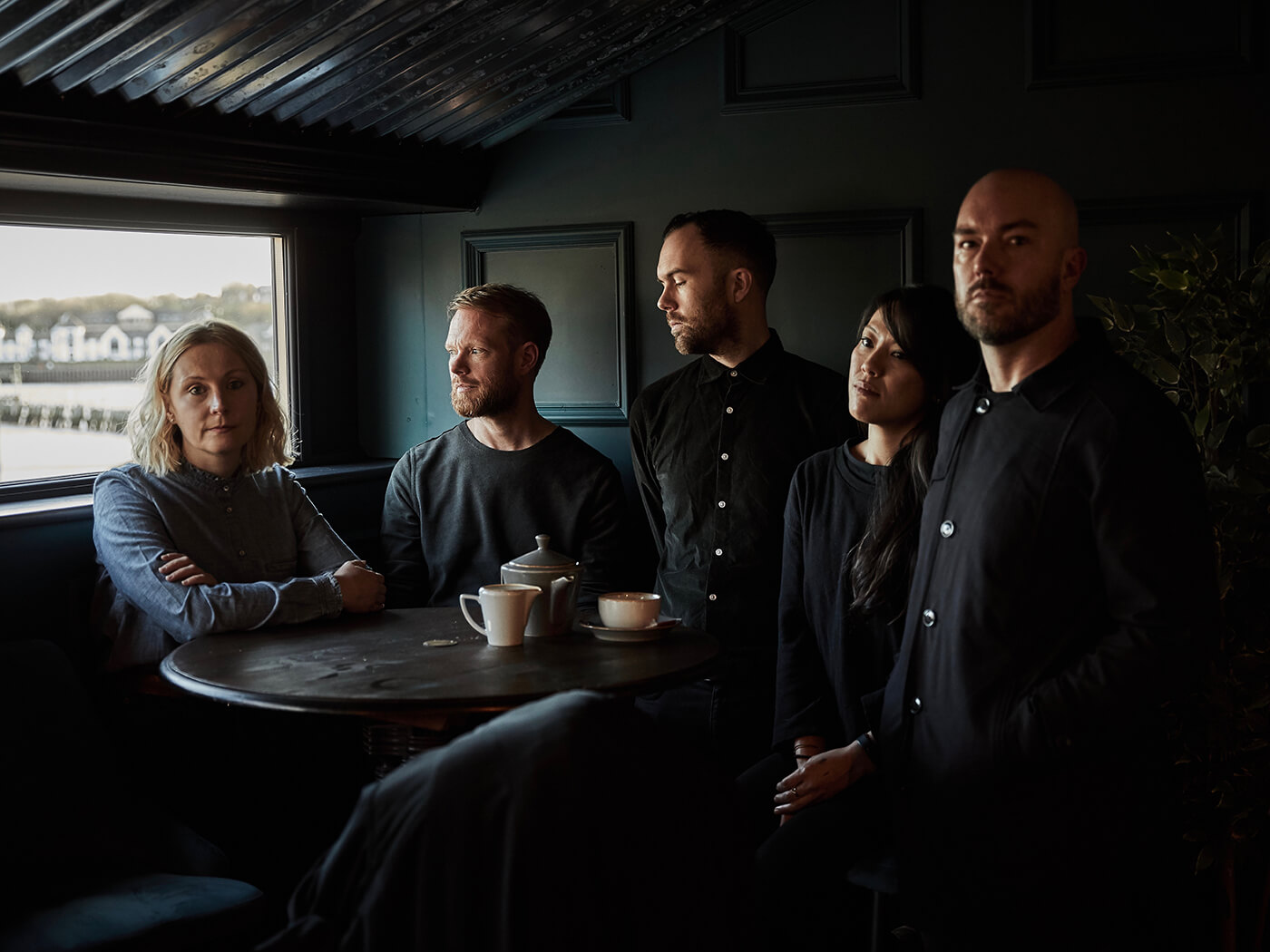 As is so often the case, new instruments sparked fresh ideas. First of all, Gregory added to his go-to Eastwood Airline ‘59 Coronado with an ostentatious red Airline ‘59 2P.

“They really are incredible guitars,” he says. “They’ve become the sound of Lanterns On The Lake, particularly the Coronado. My favourite is the 2P. It’s odd, it has single coils and the way it reacts to things is amazing. It’s not quite P-90s, it’s not humbuckers, it’s a unique sounding thing, and it looks cool too.

“They’re quite mid-heavy and the Coronado doesn’t have a lot of low-end. The 2P has got a lot of bass, but it’s quite a full-range sounding guitar. It’s a little bit like if you took a 335 and a Strat and put them together in the weirdest shape…As soon as I started recording, I knew it was going to be my go-to guitar.”

Gregory may finally have ended his search for the perfect amp, too. Having tried a Fender Blues Junior (“great, but too small”), a Vox AC30 (“too big”) and a Fender Hot Rod Deville ML 212 (“just right”), Lancashire boutique builder and Kevin Shields’ former guitar tech Andrew Pih provided the answer – the 20-watt Motion Custom Works 4G8C1-L, designed especially for Gregory. Based loosely on a 4G8B1 but with a modified tone stack for a smooth, controlled top-end, it sports Russian military-spec 6L6 valves and a pair of 10-inch speakers: a Celestion Gold and a Jensen Jet Series Tornado.

“I completely changed my guitar rig for Spook The Herd,” says Gregory. “It’s the best sound I’ve ever had, so it was easy to pick out parts and play melodies. I was enjoying the sounds coming out of the amp, parts were just falling out of the guitar.

“What really changed was when I got the Motion Custom. Andy’s a clever man, his brain is like a planet. The amp sounds somewhere between a Fender and a Hiwatt, I guess. It’s the most incredible thing.

“It’s where it sits in the mix of the band, it’s so dynamic in the way it reacts to the guitar, but it never feels too loud. The tremolo is to die for and it takes pedals really well, it seems to add a 3D effect to everything. If it broke or got nicked, I don’t know what I’d do now.” 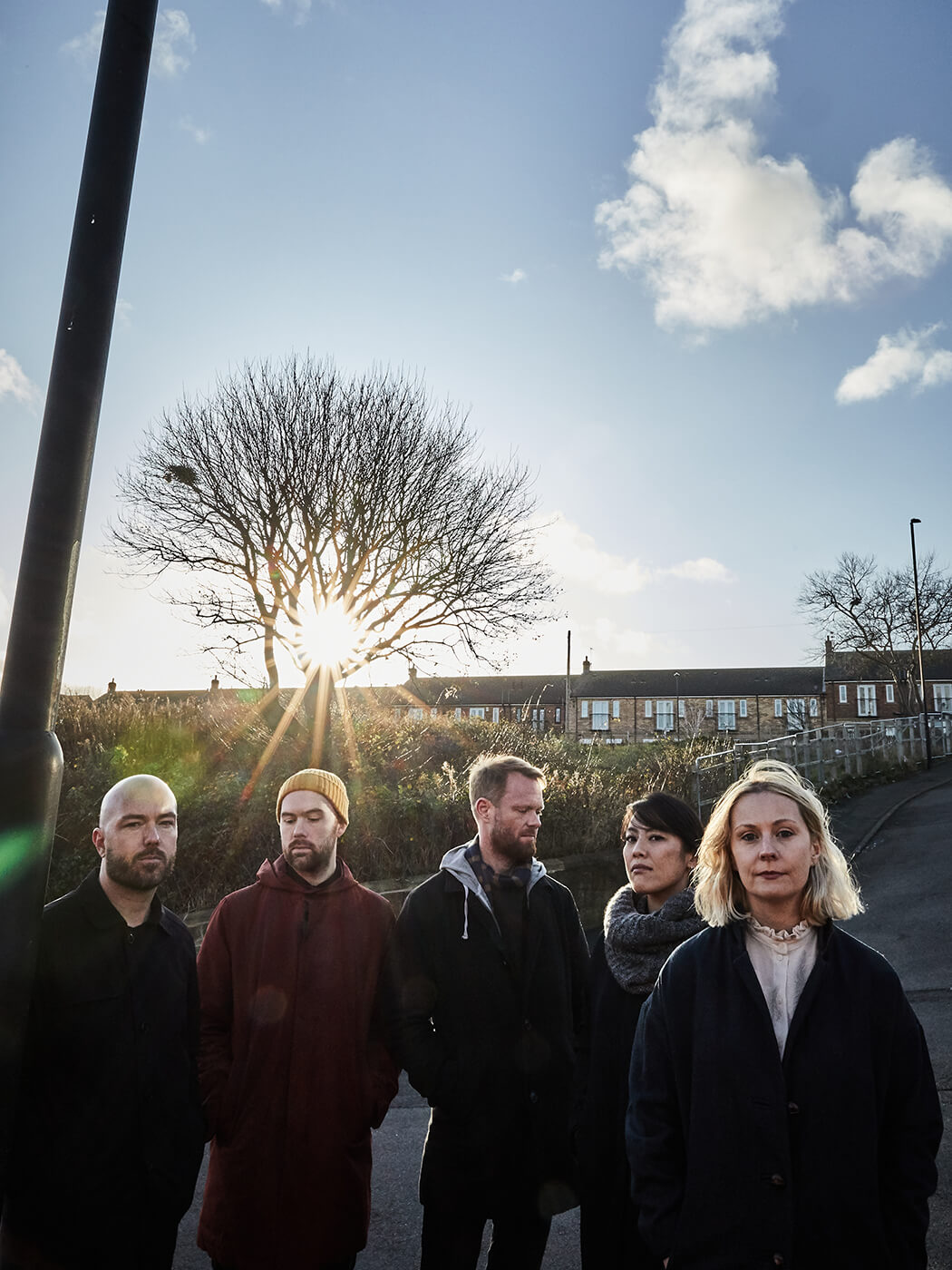 Three new arrivals on Gregory’s pedalboard were equally instrumental, as he replaced his long-serving Digitech DigiVerb and Line 6 DL4 with a trio of heavyweights from Californian ambient wizards Strymon, alongside his ever-present EHX POG.

“The BigSky is on everything on the album,” he reveals. “It’s a game-changer. It sounds like a rack reverb and it’s my favourite pedal. It just is the guitar sound of that album. There’s no extra reverb on the guitars, it’s all the BigSky. The TimeLine is a weird and wonderful thing, too, that you can really get lost in, and I used the El Capistan on pretty much every song.”

Gregory is also something of an accidental collector of drive and fuzz pedals, finding himself on a seemingly eternal search for the perfect combination. “The quest never ends,” he says with a pained laugh that tells of 15 years scouring eBay. “I had an old Pro Co RAT with the hallowed [LM308] chip. I got it for £35 quid and a dog had chewed it, there were bite marks! When I got that, it was like, ‘This is it, the drive pedal for me’. I had it for it about two years and then it broke. Since then, it’s been infuriating. I got another RAT and it didn’t sound the same, then another one, with the chip, and it didn’t sound the same either, it’s nuts.

“I always have a Tube Screamer-type pedal and a Fuzz Face-type pedal. On this album, I used a Way Huge Green Rhino and a Fulltone ’70, which has replaced my Fulltone ’69. It’s silicon, so it’s less temperamental to temperature changes. But that’s about to change… I’ve recently bought a Hudson Electronics Sidecar and I’ve ordered a Broadcast, too. The Sidecar is like a high-gain 808, but it cleans up more than an old 808. I took a punt on it, and it’s an amazing sounding thing.”

When Spook The Herd was nearing completion, the affable Geordie guitarist finally ticked off another ambition – buying his first Jazzmaster. His new Mystic Seafoam American Professional model is a guitar he’s so hopelessly in love with, he’s already considering buying another – identical – one.

“Being left-handed, you don’t get the same amount of choice,” he says with a wistful sigh.

“It’s the best guitar I’ve ever played without any shadow of doubt. I carry it around the house, and if I walk past it in a room, I’ll stop and stand looking at it.

“I actually need another Jazzmaster. I think I’m going to play this for the rest of my life, but I’m quite hard on my guitars, they take a thrashing, so I should probably get another one for touring. I want one exactly the same. Same colour, same everything… I just really love this guitar.”

It’s been a long wait for Lanterns On The Lake to get back on the road. An essential rest, an album delayed by a year, and then the hammer blow of the COVID-19 outbreak meaning the band had to postpone a largely sold-out UK tour. Do they recognise a certain irony in the fact that their breakthrough album has finally arrived at a point when they can’t promote it? 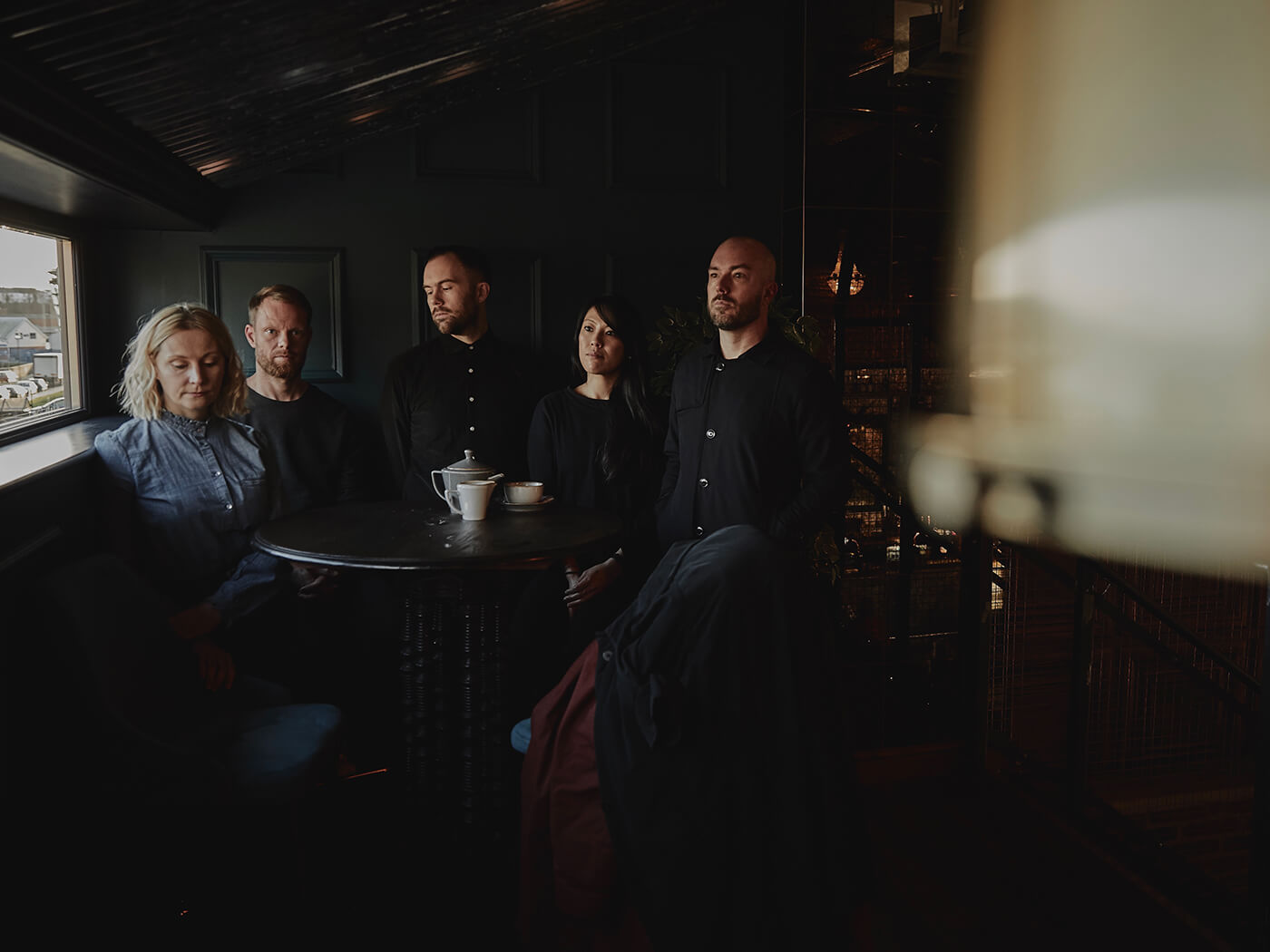 “It is quite funny,” Gregory admits with an incredulous high-pitched laugh.

“It’s just mad that we’ve waited so long to go on tour, we were so looking forward to it, and the world has to shut down for a bit. The silver lining is I get to spend more time with my daughter, which has been amazing. But it’s a bit of a running joke that we’ve been prevented from going on tour by a global pandemic. What were the chances…”

Lanterns On The Lake’s Spook The Herd is out now on Bella Union.