Brian King on why the Canadian punk duo brought dirty punk club energy to one of Toronto’s most historic theatres on their album, and how a big room necessitated a rethink of his guitar staples. 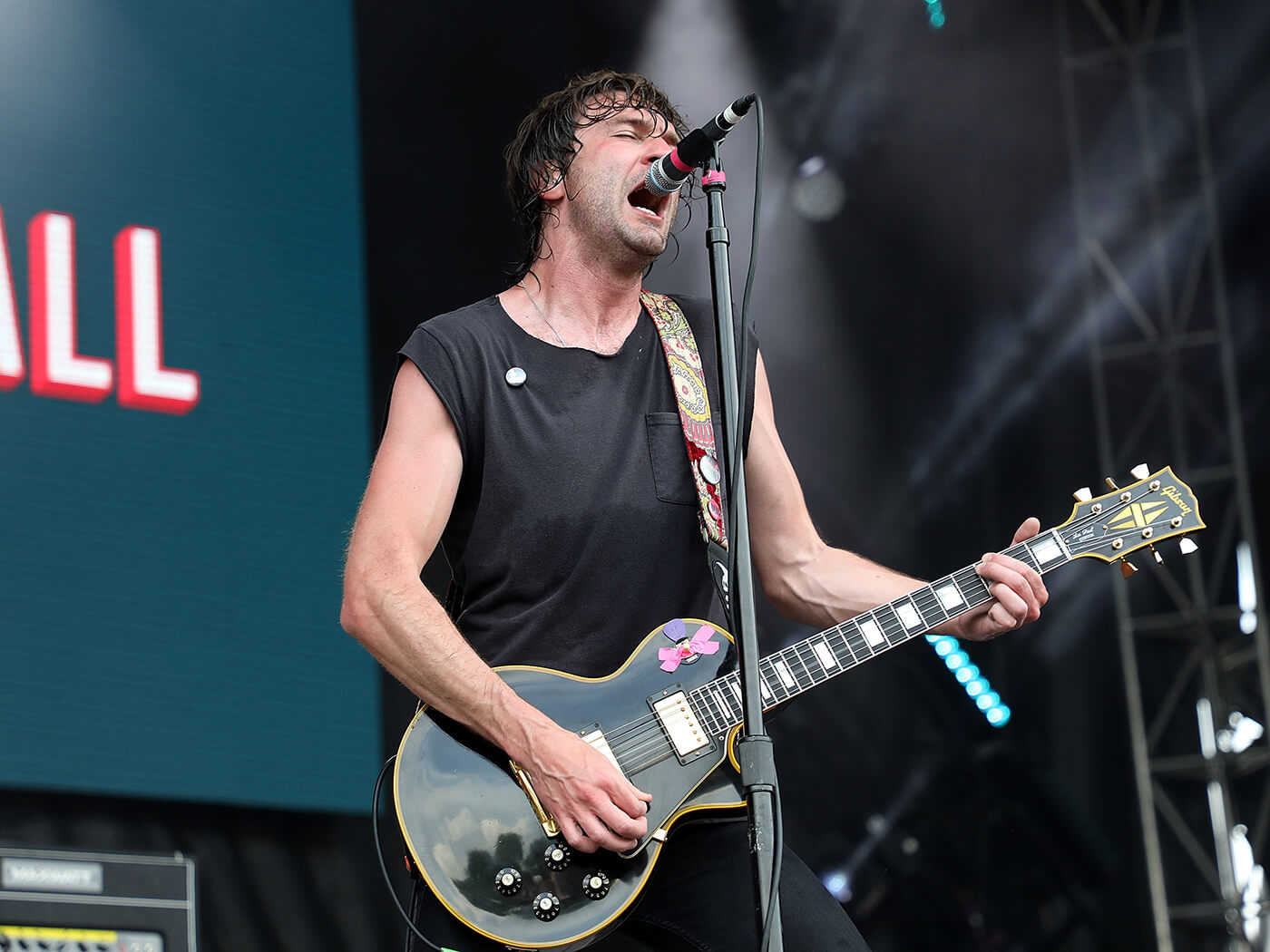 Sometimes, you just have to laugh. As Japandroids thrashed through their perennial set closer The House That Heaven Built at Toronto’s fabled Massey Hall back in 2017, Brian King did just that. “That song went off, and the kids in the front couldn’t help themselves any longer,” the guitarist recalls. “They started climbing up and trying to stage dive. You have to remember, you don’t stage dive at Massey Hall.”

You can hear him cracking up as clear as day on Japandroids’ new live record, which feels like a culmination of sorts for King and his drummer bandmate Dave Prowse. After almost 15 years of kicking out jams that cross Hüsker Dü’s bullish melodicism with the wastoid barroom rock of the Replacements, Massey Fucking Hall is an out and out ‘Look at me, ma!’ blowout for the Vancouver duo.

“The energy in the room that night was really great,” King says. “People were coming down the front, being extra noisy, and trying to create the same vibe that we would have had in a dirty punk rock club. That allowed us to loosen up and do it like we would always do it.”

Still, King is at pains to point out that Japandroids aren’t the sort of band that usually gets booked at Massey Hall, which is a little like Toronto’s answer to London’s Royal Albert Hall. Opened in 1894, previous live albums captured there include a 1953 classic by the Quintet – jazz greats Dizzy Gillespie, Charlie Parker, Bud Powell, Charles Mingus, and Max Roach – a 1971 solo performance by Neil Young, and Rush’s seminal 1976 double LP set All The World’s A Stage.

“Honestly, it was surreal,” King says. “Typically we play your dark and dingy rock clubs. We don’t play theatres, and we almost never play shows that are seated. Even when we play iconic, historic venues it’s not a theatre. People can still get kinda rowdy, you know? Number one, there was the feeling that this was going to be a different kind of show because it’s going to be seated, it’s going to be a theatre, and the vibe of the crowd is going to be different to a typical Japandroids show. And that’s something that we were a little concerned about.

“On top of that there was the fact they were filming and recording the show. If you ask any artist, when you know they’re recording there’s just an extra set of nerves that go into that. On top of that, there’s the knowledge that this is likely your one chance to play this room. You’ve been a band for over a decade and you’ve finally got there. It really has that once in a lifetime feeling to it. You put all of that together and, I mean, we were sweating. We. Were. Sweating.”

From the outside, though, Japandroids playing a venue with this sort of history is less jarring. The Massey Fucking Hall setlist cribs from three albums – 2009’s Post-Nothing,  2012’s Celebration Rock and 2017’s Near to the Wild Heart of Life – that positioned them as one of the most vital rock bands around. Their mix of boozy abandon and literate readings of classic tropes has long struck a chord with punks who wanted to forget some troubles and make plans for a different sort of future.

By the time they pitched up at Massey Hall the duo were dialled in, ricocheting off each other live, trading hollered refrains and sending sweat droplets spiralling into the front row. You can hear that energy on the record, which is a no frills take on the live album. At its midpoint you begin to notice the effort in King’s voice, and almost feel the lactic acid building in his arms. Overdubs were very much verboten. Kiss Alive! this ain’t.

“It’s not perfect, but then Japandroids aren’t perfect, and we’ve never played a perfect show,” King observes. “It was such a special night, so we wanted to preserve the experience of being at the show. We kept all of the songs in the same order. Things needed to be edited a bit because the listener doesn’t want to hear silence or tuning, but we didn’t fix anything.

“It’s a typical rock show. You come out of the gates strong, you’re burning real hot for the first few tracks, in the middle you settle in a little bit. Towards the three-quarter mark you start to get kinda tired, your body and your voice start to give out a little bit, and then you rally towards the end when the finish line is in sight. There’s a very natural arc in the energy and momentum of a really good rock show. I think you can hear at the end that we’re trying to push through, to give it that extra 10 per cent.”

From the moment that they kick into the opening song, King’s tone will wash over long-time fans like a safety blanket. At Massey Hall he played his trusty pair of 1970s Telecaster Deluxes alongside a brace of Les Paul Specials that elbowed their way into the conversation more recently as Japandroids started playing bigger rooms.

“You start to see how stuff that worked in a 500-cap club doesn’t work the same in a 2,000-cap club,” he says. “There, you’re really starting to notice how thin stuff sounds, and how muddy. Our crew was really supportive, and everybody wanted things to sound as huge as possible. They really pushed me to open my mind a bit. The first time I plugged a Les Paul Custom into my amp setup and let it rip it was like, ‘Ho-lee shit.’

“It felt like it was straight out of a classic 70s rock record. I loved it, but I had difficulty transitioning to using them because I’d played a Telecaster Deluxe for a decade. The muscle memory, how it feels against your body – I just knew how it responded. Les Pauls are heavier, they sit differently, the neck is different. That tour caught me doing half the set with the Telecasters, and half with the Les Pauls.”

That amp setup requires a little bit of unpacking. As the sole guitarist on stage he shoulders a lot of responsibility, approaching his task as someone who’s always learning. Utilising a Radial seven-channel splitter, each night he calls on a pair of Roland JC-120s, two Hiwatt heads powering two Orange 4x12s, and either an Ampeg or a Hiwatt bass rig. He uses pedals sparingly – an Eventide H9, an Electro Harmonix POG – and acknowledges that if his sound disappears down a rabbit hole then Prowse is left carrying the can on stage.

“Essentially what I’m doing is trying to cover as much of the EQ spectrum as I can with a single guitar,” he says. “One of the JC-120s is a very clean tone, there’s a little bit of that stereo chorus in there, and that one sits on top. The other one is really high gain, blown out, gnarly, fuzzy distortion. Underneath those, you’ve got the Hiwatts and the Orange 4x12s. Those are your mid to low distortion, your thick, heavy big muff sound.

“The reason I have two is that my pedalboard goes through one and then the other just stays static. At any given time I can throw on whatever pedal sound I want, no matter how subtle or how wild, and my general sound is unfazed. The fifth channel is going into the bass rig, and it’s coming out with all the treble and the mids off. I’ve got one more that’s basically subsonic. That’s to add that low rumble, almost non-musical. Then there’s one DI channel coming right off the guitar that our front of house can use for whatever he wants depending on what the room calls for.”

As triumphant as Massey Fucking Hall often is, its release amid the Covid-19 pandemic, when live music isn’t even a dot on the horizon, makes it a bittersweet experience. King hopes that it can provide a sticking plaster, even if he doesn’t view it as a like for like replacement. “Even the best live record can’t replicate the feeling of seeing and hearing it and feeling it in person,” he admits. “We weren’t planning on releasing this record now, but when this thing hit it just seemed that if there was ever a reason to rush something out there for people then now’s the time.

“I don’t think that anyone is going to listen to this record and think that it replaces the feeling of going to see a Japandroids show, but even if it just helps them get through this time, or makes it a little bit easier, then it seems like it was worth doing it. In my head I’ve got this idea that maybe some kids will get together and crank the record, have some drinks, and try to relive the feeling of going to a show at their house. That’s as close as you’re going to get for a while.”

Massey Fucking Hall is out now on ANTI-.