“I played it between two $50,000 guitars, and it held up!” Jason Isbell on his new Fender signature Tele, acting for Martin Scorsese and knocking off the rust

The guitarist on why he nearly opted for a signature Strat, how he’s feeling “loose” after a year without gigs, and why you don’t have a good Tele if you can’t make it sound painful. 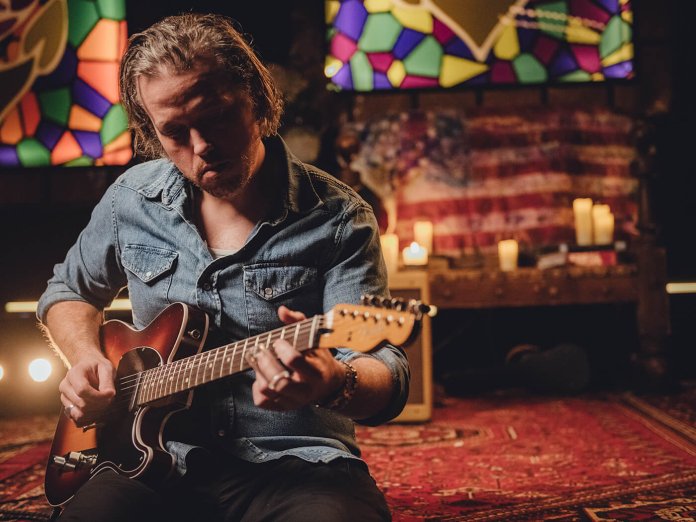 “It’s a little scary, but I think it’s going alright.” Jason Isbell is talking to us down the line from Oklahoma where the guitarist is on the set of Martin Scorsese’s latest movie, Killers Of The Flower Moon. It’s quite a big gig for a novice’s first foray into the world of acting, and we wonder why he didn’t fancy a turn in something a bit more low-profile before jumping head-first into a major motion picture helmed by the most respected director of his generation. “Yeah it’s a pretty short resume for sure,” he admits, “but it seems like a pretty good one!”

As you would expect for a man in possession of a great many fine guitars, it’s not long before our conversation turns to six-strings, but at the forefront of Isbell’s mind today isn’t one of his stable of vintage instruments, but a brand-new guitar – the new Fender Jason Isbell Telecaster. This isn’t Isbell’s first signature instrument – he has a signature Martin D-18 – but there’s something about an artist being honoured with a signature Fender that feels extra-special, and we wonder where this ranks in a career that’s been littered with so many memorable moments in the last decade. 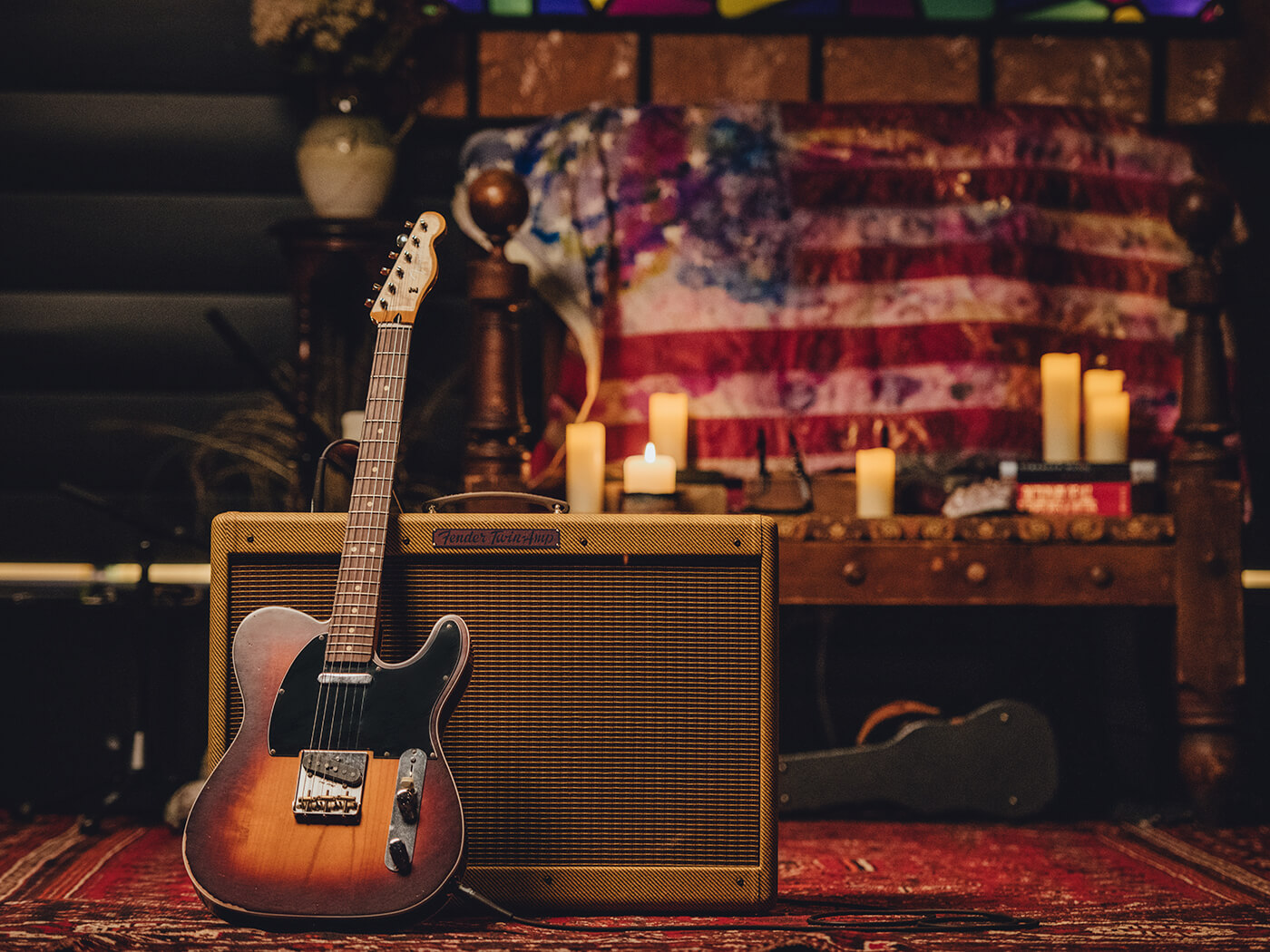 “I try not spend too much time dwelling on those things, but it is a big deal when something like that happens,” he muses, “The thing about getting my own signature Tele is that it speaks to the part of me that is most involved and interested in music, the real nerd part of me that likes guitars and the way they’re designed and put together.

“More importantly, it gives me the chance to talk about guitars, because most of the time most people really don’t want to hear about that stuff!  People don’t really want to see behind the curtain, but I actually like to geek out on what makes guitars great and how they’re used to make great music” 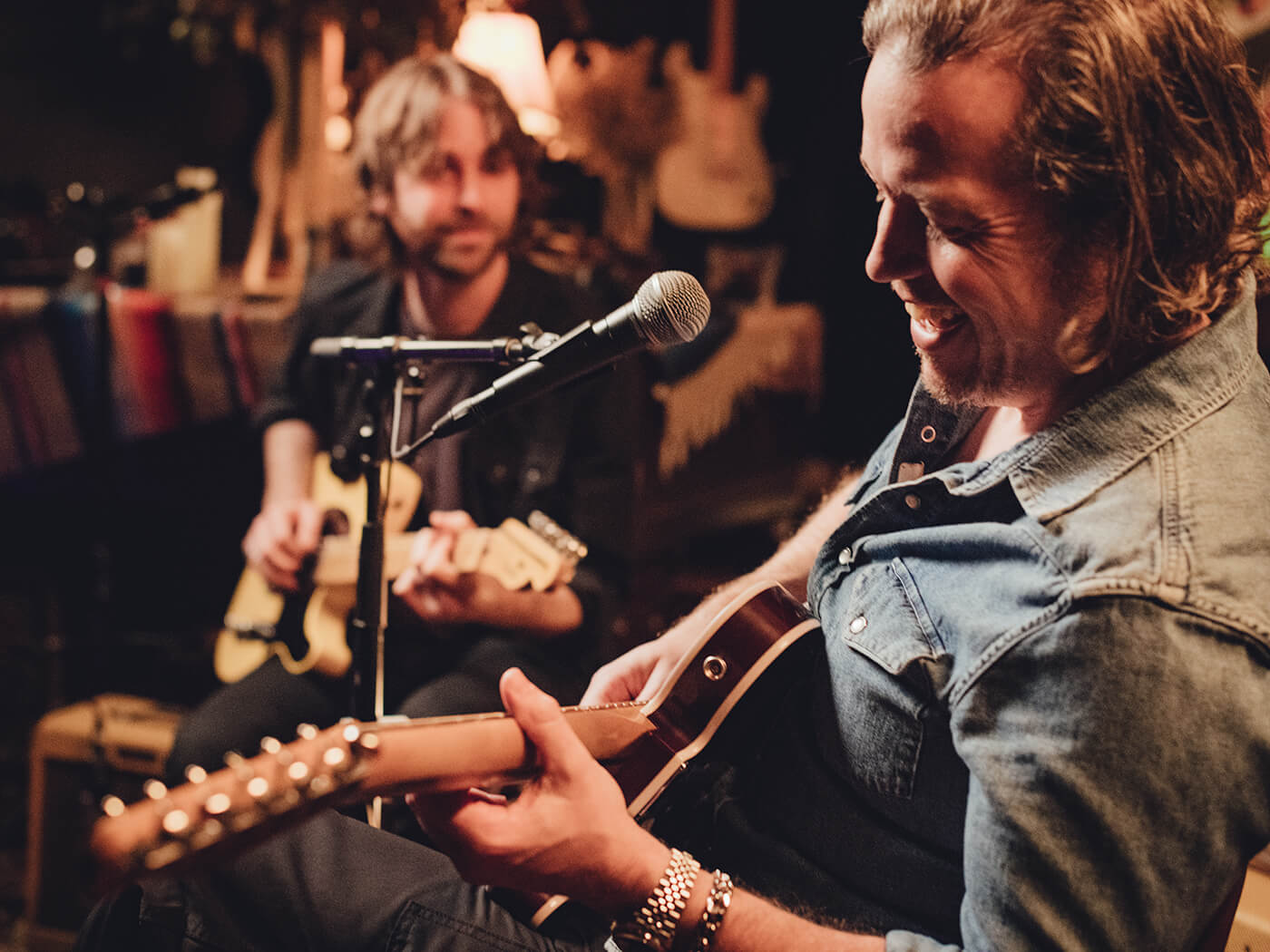 This nerdy part of Isbell has spent the best part of the last two years enthusing about the jewel in his vintage collection – the 1959 Les Paul known as ‘Red Eye’ – but in recent months he’s often been seen on Instagram cradling a 1960 Strat that features heavily on the likes of Overseas and Only Children from his latest album Reunions. With that in mind, we can’t help but wonder if the guitarist was tempted to put his name on a Strat rather than a Tele?

“You know, a Strat was the first guitar I had as a teenager and if you’d asked me at that time what signature I wanted it would’ve been a Strat,” he reveals. But I hadn’t played out live at that point. I still love Strats, but the Tele took the top spot for me after I had to go out and tour, play a whole bunch of shows and discover just how durable it is. 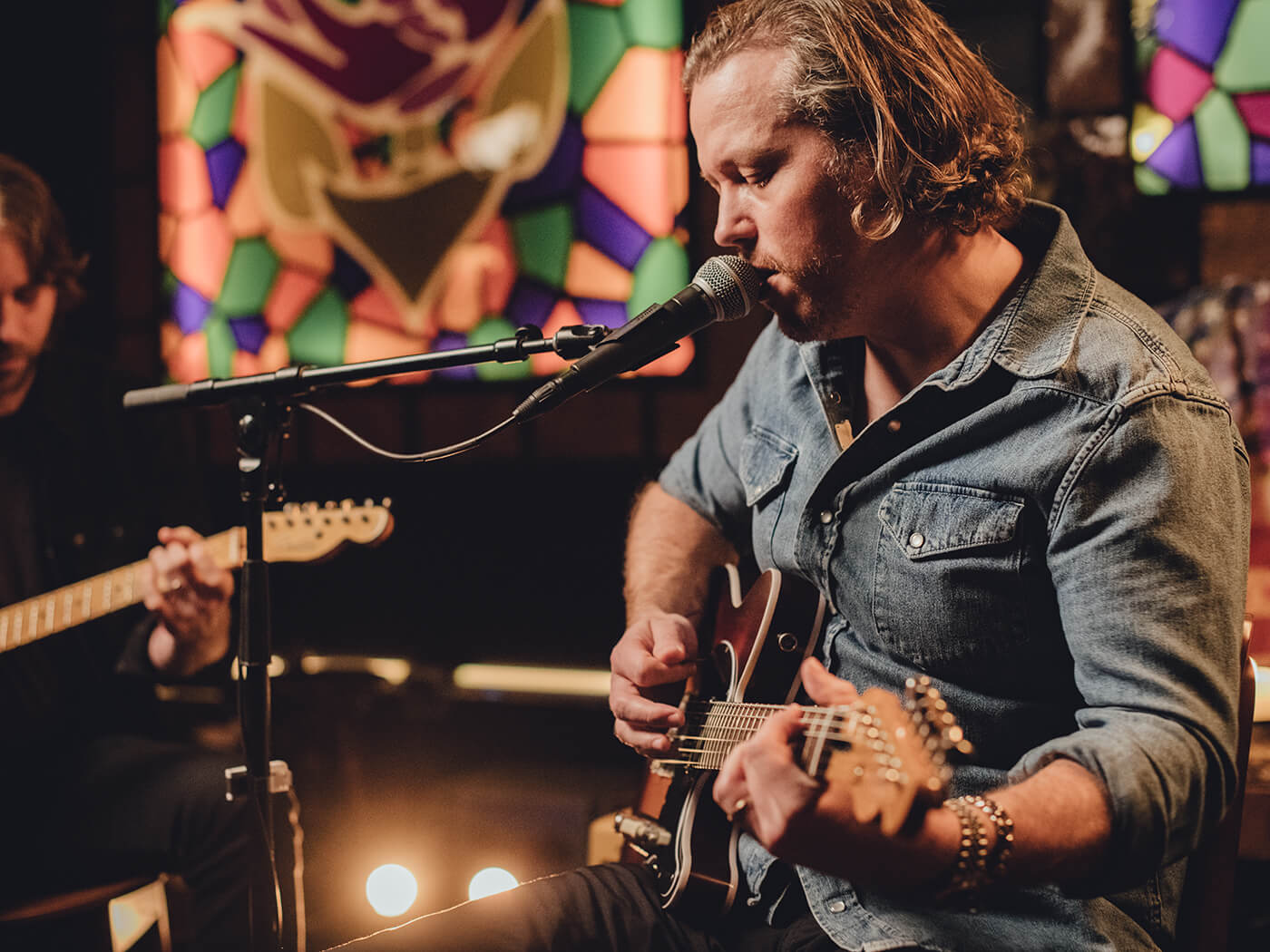 “What really got me was I was playing Willie Nelson’s Fourth Of July Picnic in Austin and right before the show my pedalboard died and so I had to play a set with no tuner. I had a custom shop Tele, one of the ones we based this signature model on, and I didn’t have to tune it, it stayed pretty much in tune for the whole show and this was in the day in the Fourth of July Texas heat!”

Unusually for a signature model, the Isbell signature Tele isn’t modelled on one guitar, but instead is a combination of various aspects of a variety of instruments he owns, all put together in a way that he feels works best. It’s a way that Isbell feels he can avoid the trap of signature guitars that are so perfectly calibrated for their artist, they don’t work for the people who might want to buy it.

“I like all different kinds of guitars and I like to appreciate the differences,” he explains. “But If I made a signature series guitar for people who were just like me then we wouldn’t sell a whole lot of them. I don’t have to tune my guitars on stage now and I change guitars all the time and I think it would be selfish to design a guitar with only me in mind. 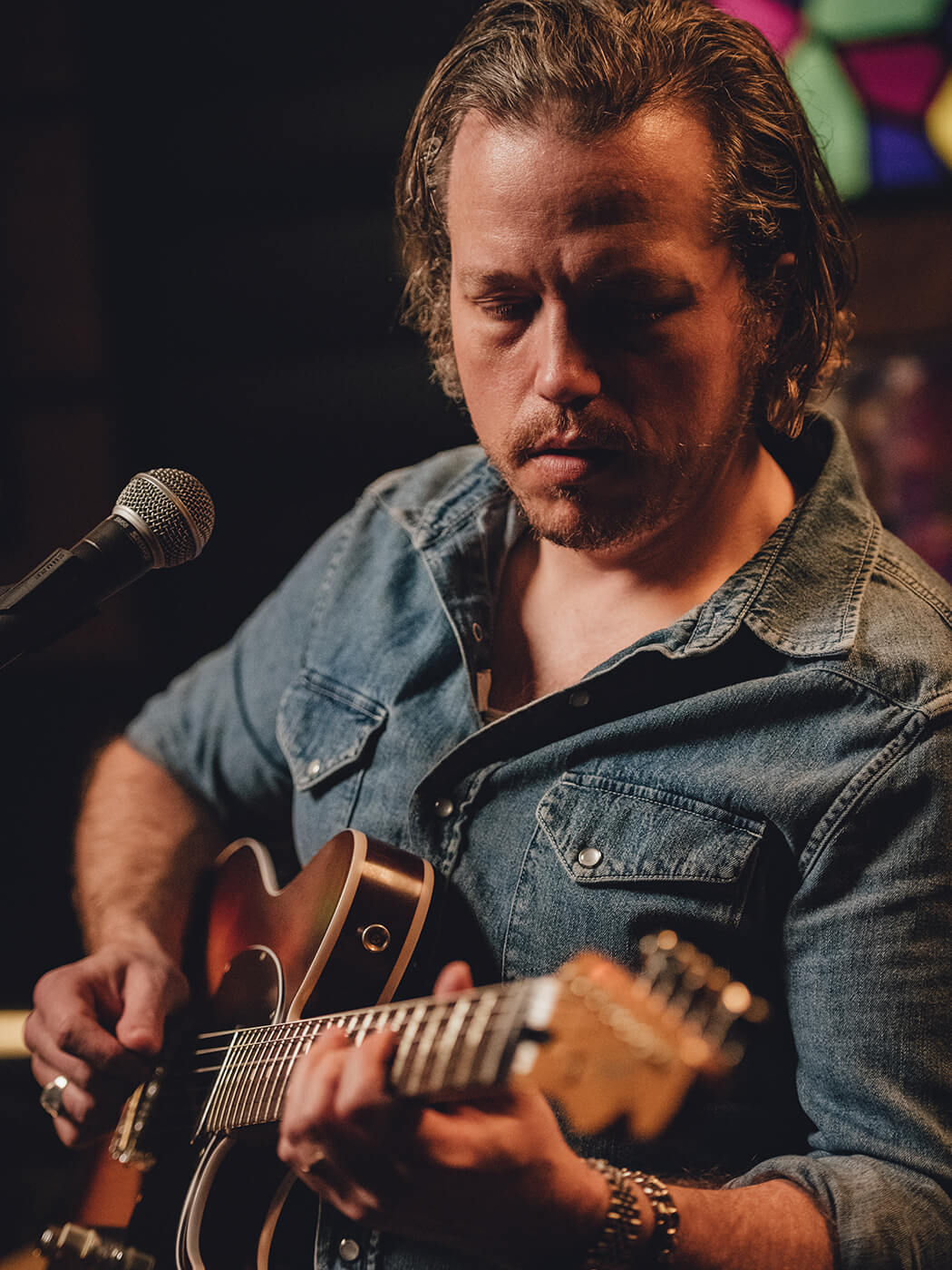 “I couldn’t think of a better goal to shoot for than a guitar that was versatile enough for somebody to take it out and make it their only guitar.  I honestly think I could do a whole tour with this guitar and nobody would be disappointed with how it sounded. I had a show in Florida last Saturday, and I played it between two $50,000 guitars, and it held up. The guitar being more affordable was deliberate and the thing I’m most proud of – there aren’t a lot of guitars in its price range that would do that.” 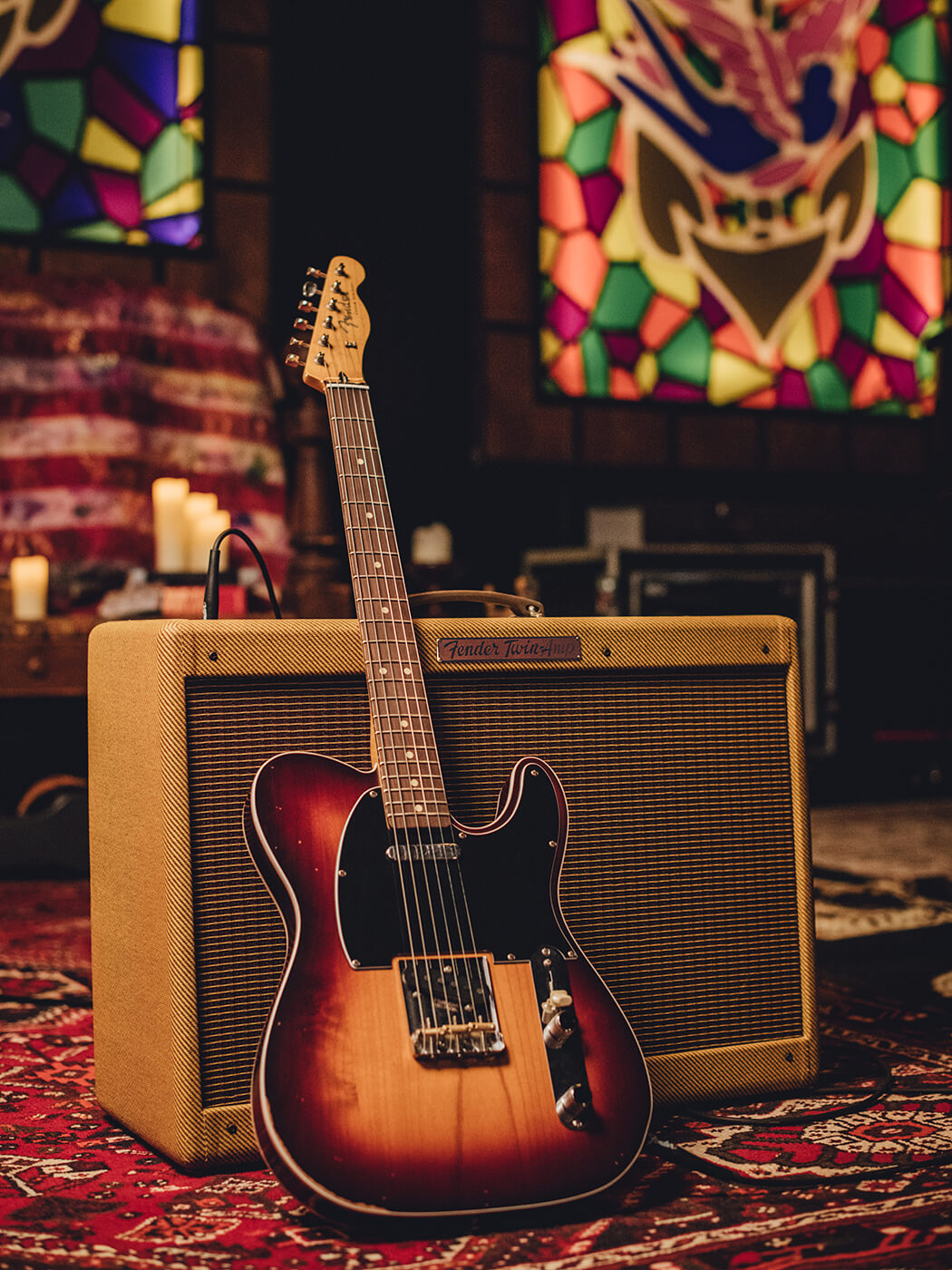 Like many pro guitarists, Isbell is a great believer in utilising the full range of switches and controls on a guitar to get the most out of it, and his signature model is no exception.

“This is not a guitar where you plug it in and turn everything up to ten and it sounds right in every position, you have to actually use the controls and that was intentional,” Isbell affirms. “The bridge pickup is hot and very bright and resembles the one in my 1965 Candy Apple Tele, which is what Tim Shaw at Fender based the pickup design on. 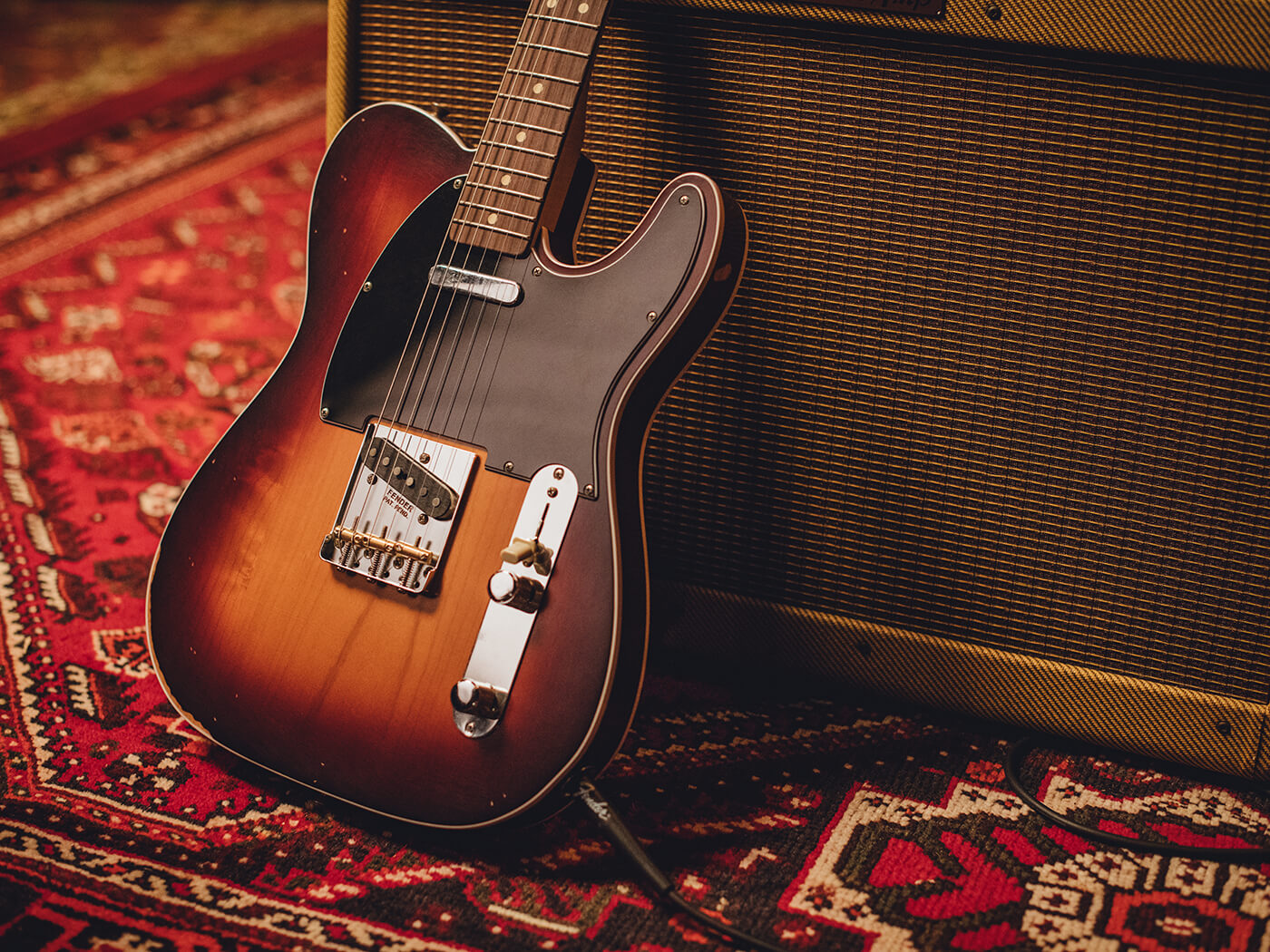 “And it’s supposed to be that way because you have a tone knob and you should have more treble on the bridge pickup of a Telecaster than you need. If you can’t get a painful sound out of a Telecaster, it’s not a good Telecaster! And you can and should always take treble off. 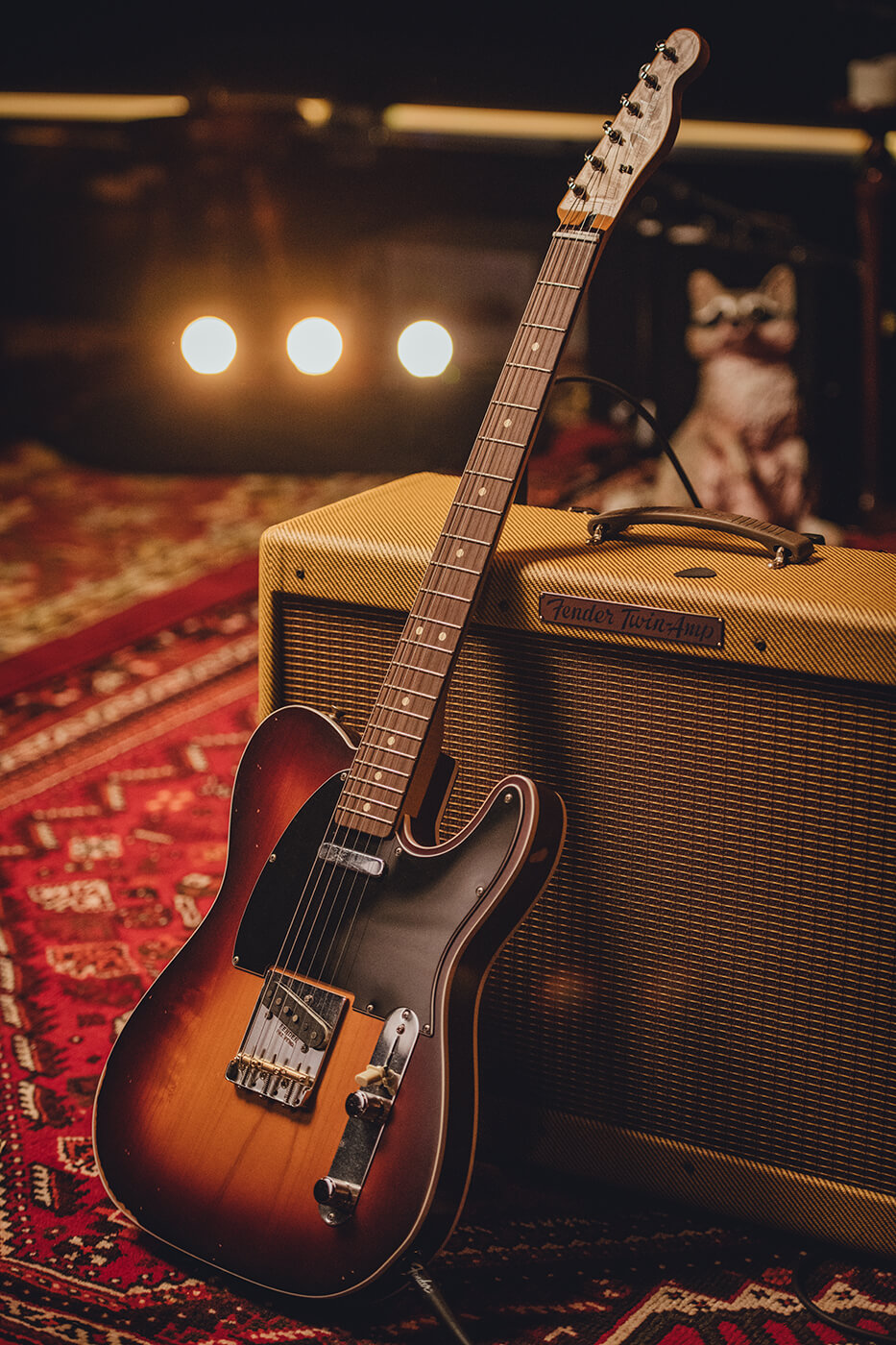 “One thing I love about the 60s Teles is there is a microphonic nature to the pickups that adds dimension to the tone and gives it that vintage sound. I wanted that to happen with the signature, as I wanted it to sound like an old guitar. To do that it needs to be a little bit hotter, and I don’t mean pickups wound more times, I mean you need to be able to make it feed back. It needs to sound hard to control, that’s the thing.” 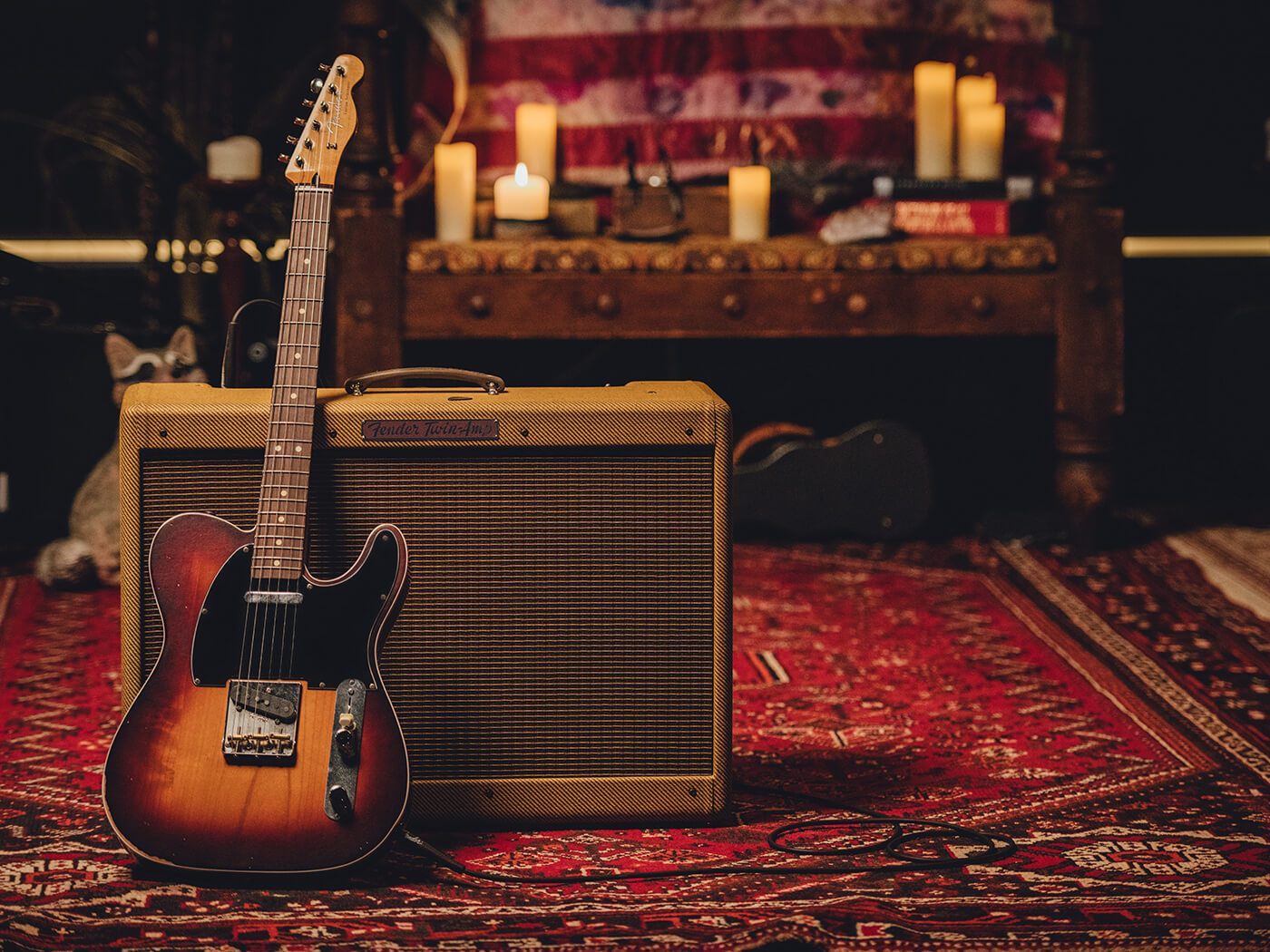 The neck pickup in the signature model is based on the Twisted Tele unit found in Jason’s Custom Shop Tele, he returned to his ’65 model when it came to the guitar’s neck, and getting the shape and feel just right was something that required a little finessing, but not too much.

“The first neck they sent me the finish and frets weren’t exactly right, so they sent another revision and nailed it,” he explains. “So it didn’t take a whole lot to get right.  Plus, I know I could go on forever with those things and reach the point of diminishing returns so I didn’t want to drive everybody crazy!” 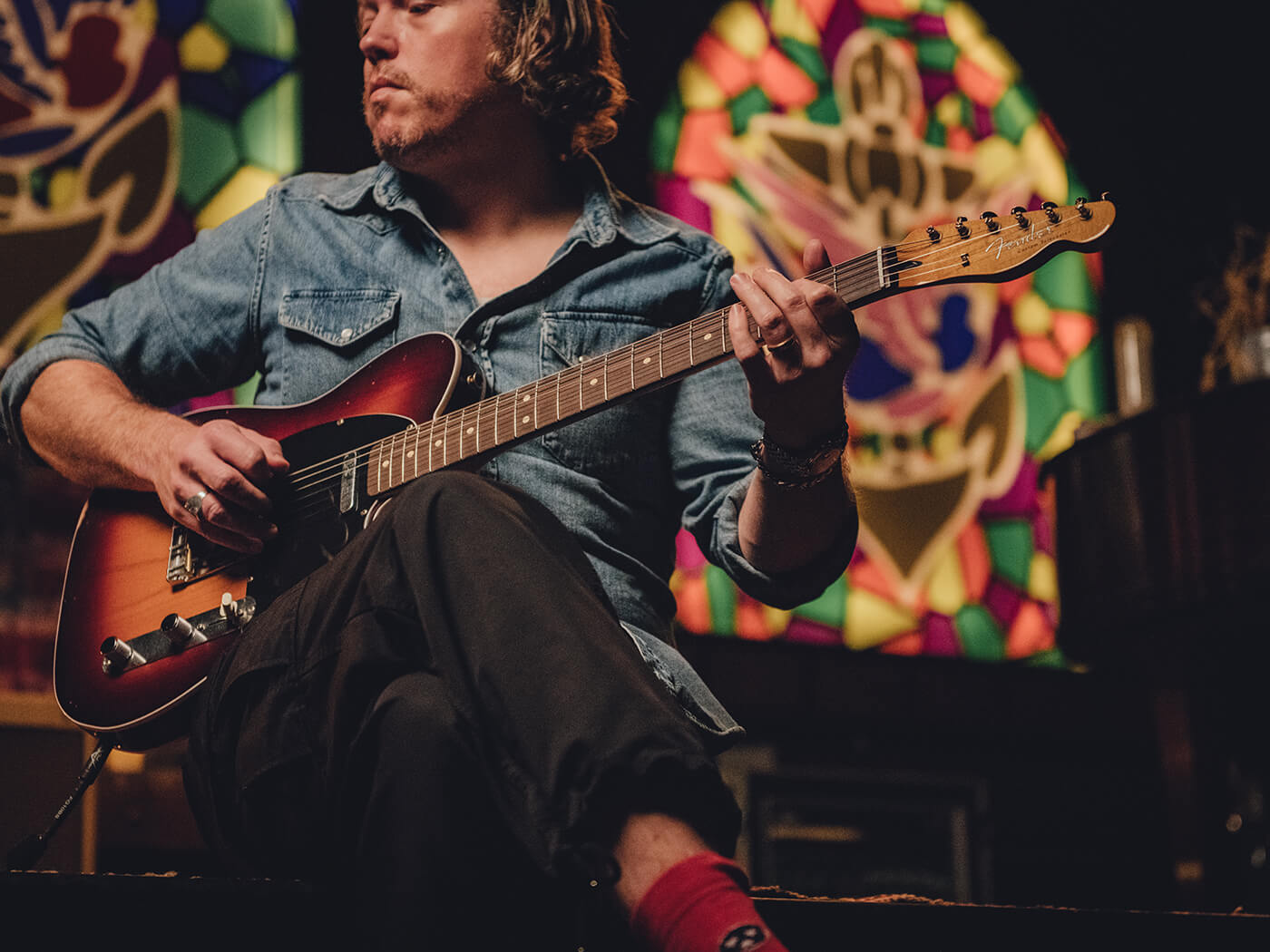 Stick your neck out

Most guitarists have spent many a long hour obsessing about neck shapes, especially when it comes to guitars made in the 50s and 60s, but for Isbell the shape wasn’t nearly as important as the feel.

“I’m more interested in the finish of the neck than the profile, and being a guy who plays so many different guitars I’m not married to one profile or size,” he explains. “That being said I did once own a ’54 Tele where the neck was uncomfortably big, but other than that I’m pretty good with most necks but I need the finish to be right – more that the finish has been played off than sanded off, if you know what I mean?” 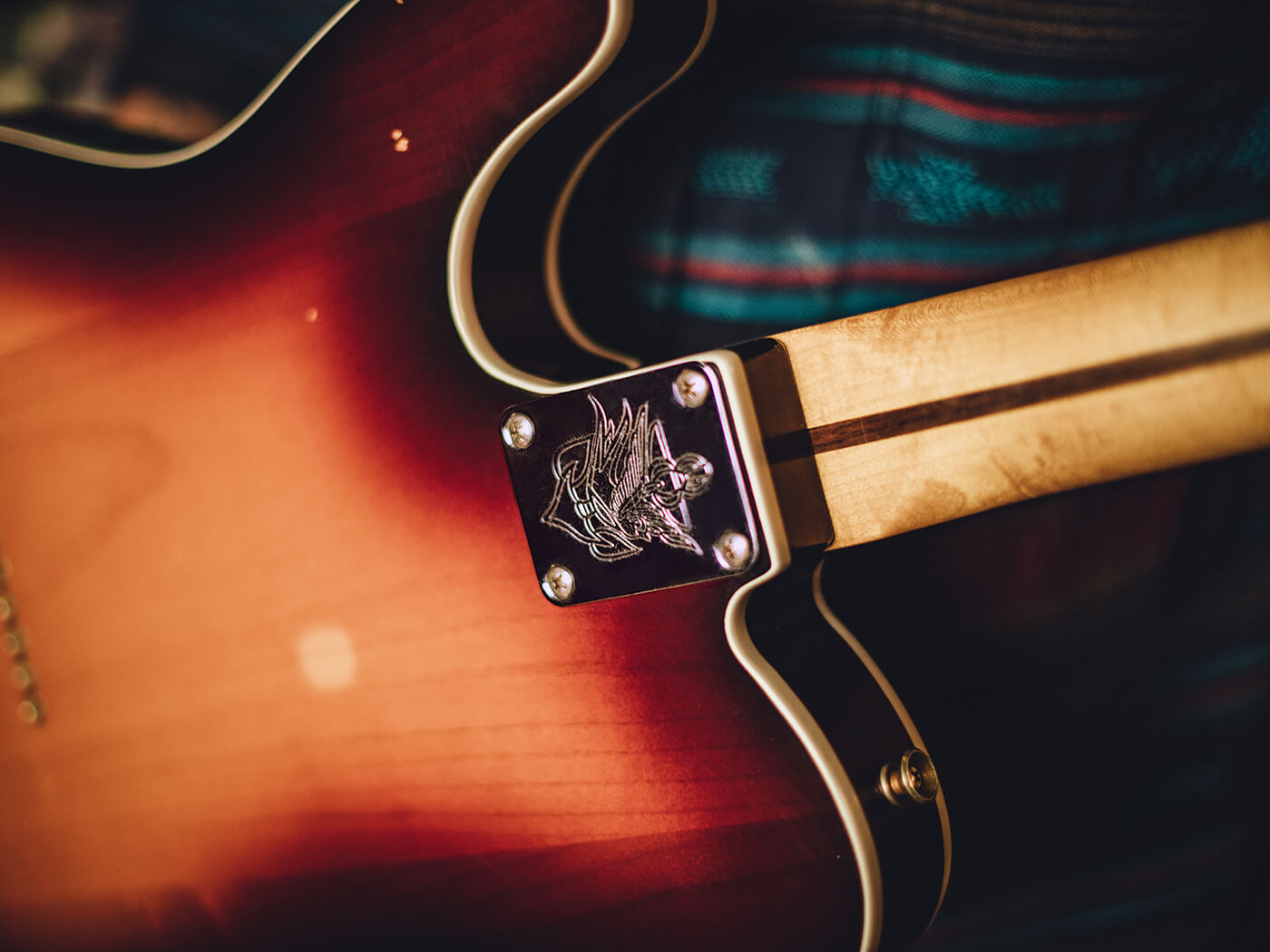 It’s hard to talk about playing wear without bringing up the thorny issue of relic’ing. Like Fender’s Brad Paisley signature models, Isbell’s Tele has been given some artificial ageing in Fender’s Ensenda factory – a fact that’s likely to polarise.

“Oh yeah, that’s like talking about sports or politics, people get crazy about it!” Isbell remarks, “But I just don’t think a pristine, new guitar looks as cool. Plus, when I was a kid I got a new Strat and it scared the hell out of me, as playing the guitar was just terrifying because I didn’t want to get a scratch on it. Every time I got a least little scratch it broke my heart so I figured why not put a few scratches on it before you even ship it out so people don’t have to worry so much about it? 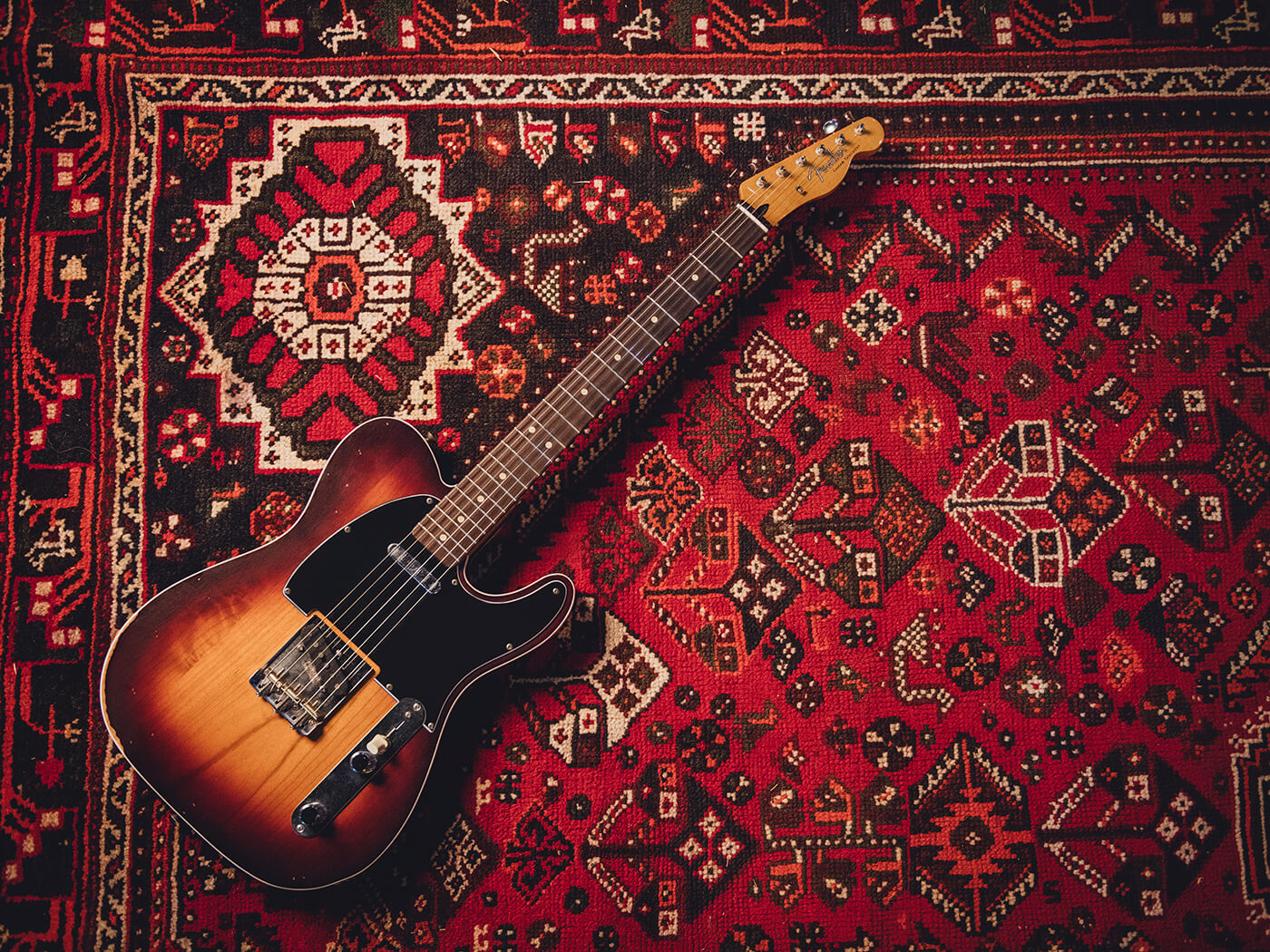 “Also, Teles are not fragile like Gibsons with their headstock angle for example, and roughing a Tele up before you send it out is a testament to the type of guitar you’re playing because it is for work and you just shouldn’t be too precious about a Telecaster.”

The word signature has been used a lot throughout our conversation so far, but one notable fact is that Isbell’s actual name or signature is nowhere on the guitar – instead his trademark bird and anchor tattoo is stamped on the neckplate. Is he uncomfortable about the notion of quite literally having a guitar with his name on it? 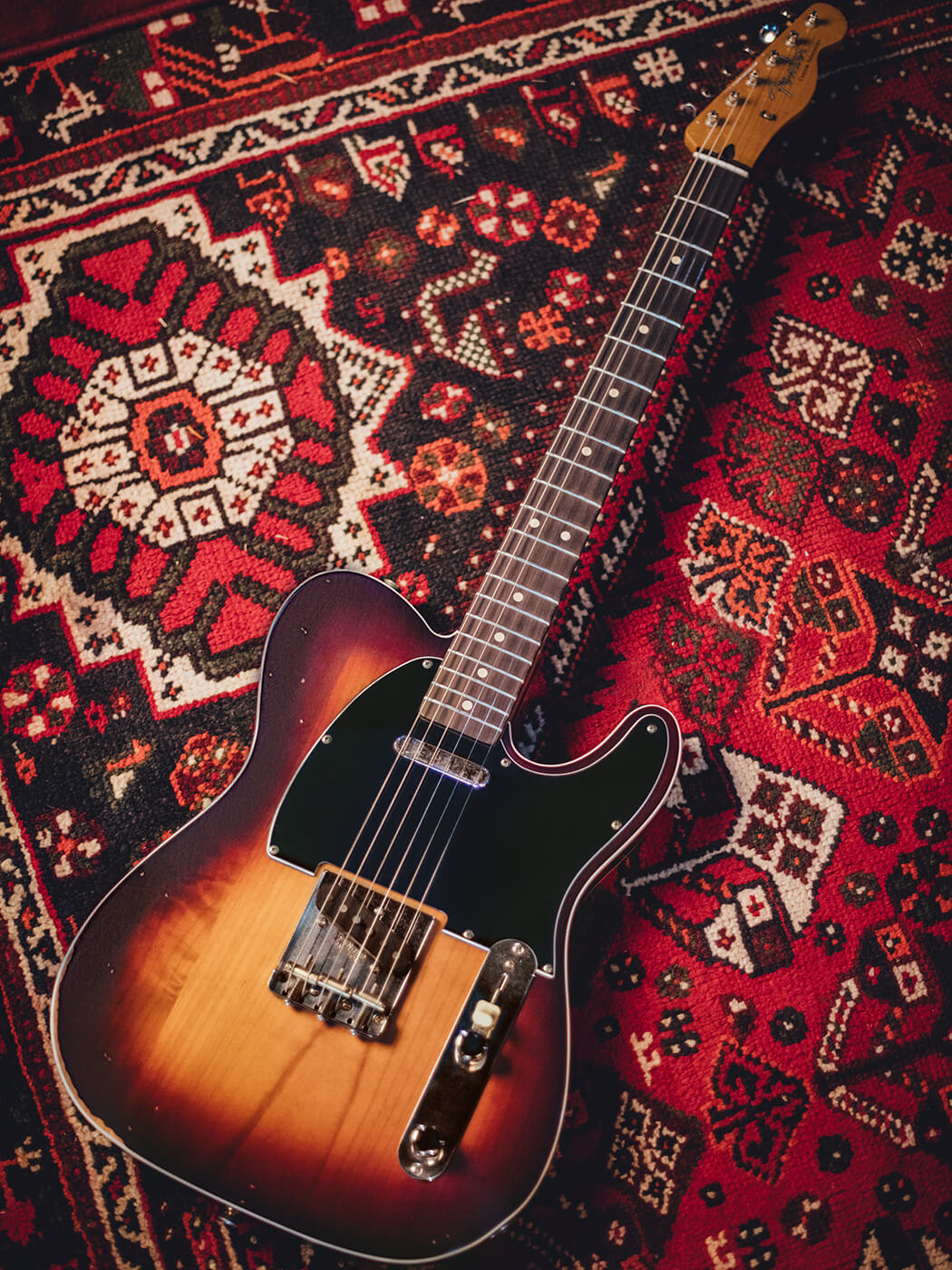 “It wouldn’t make me feel uncomfortable I just didn’t really think it was necessary,” he explains. “The people who buy it because it’s my signature guitar are going to know it’s mine anyway and I was hoping a lot of people would be interested in this guitar who don’t know anything about my music or might not even like my music. I don’t want this to be a guitar for collectors, I want it to be for players and not having my signature on it adds more to that: I want to make a guitar for guitar players not just Jason Isbell fans.” 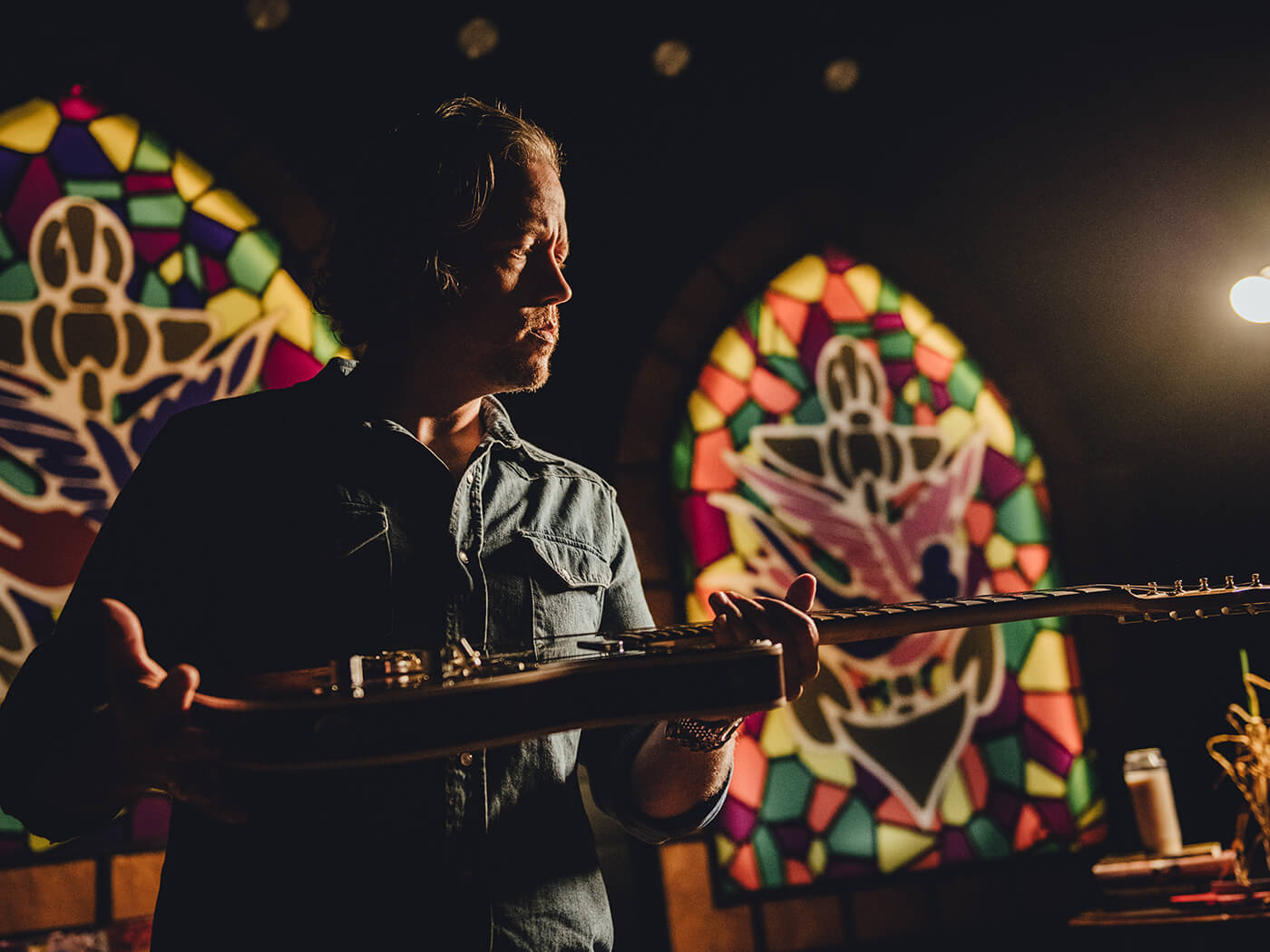 Anyone who follows Isbell on Instagram will notice that when he’s not spending time with his wife Amanda Shires and daughter Mercy, he’s mainly been spending his downtime playing guitar. But practice is not the same as the real thing. Gigs are starting again in the US, including the announcement that his hometown festival, Shoalsfest, will return this year and as a result both Isbell and his band The 400 Unit have some ring-rust to work through.

“We were loose the other night,” Isbell confesses. “And we’ll probably be loose for a while, but we really needed that show as a band. The guys in the band are so good that we can sound slick even if we’re not quite there, so I don’t mind us being a little loose as long as the groove is there. 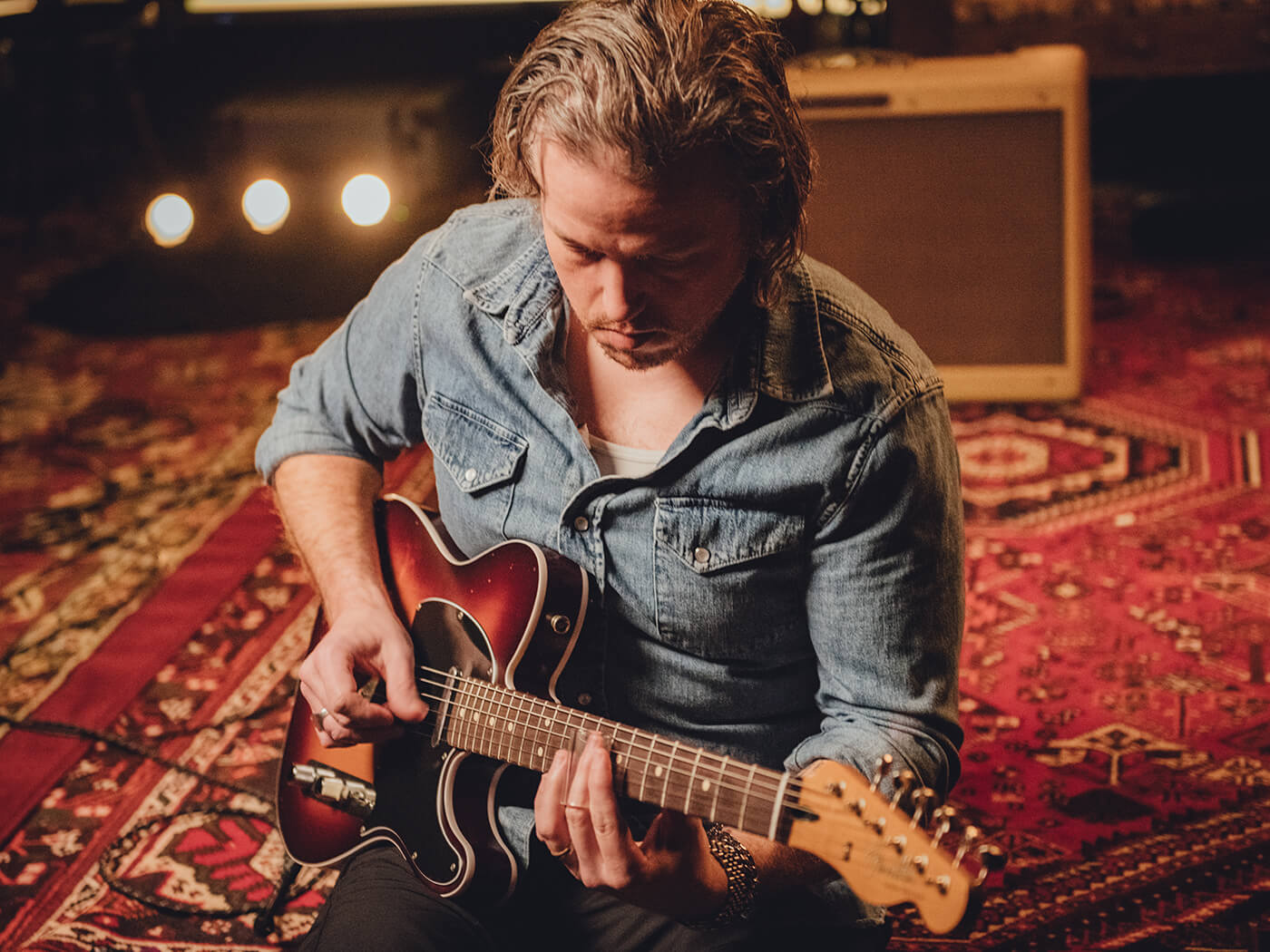 “My bass player [best friend, Jimbo Hart] came up and apologised after the show saying ‘Man, I hit so many clams!’ And I heard them but I didn’t care because he was in the moment, he cared about the song and was happy to be there and not just going through the motions.

“I’ve never disliked a concert because the band sounded rusty, the only reason I’ve not enjoyed a show is when they didn’t seem like they cared to be there and I don’t think that’s going to be a problem for any of us when we get to playing again”

Find out more about the Fender Jason Isbell Telecaster at fender.com.