“I was a man on a mission”: Jason Lytle on 20 years of Grandaddy’s The Sophtware Slump

It’s been 20 years since Grandaddy released the spellbinding dystopian masterwork that Jason Lytle conjured alone in a farmhouse in rural California. So much has changed in the two decades since, yet there’s a comforting symmetry in the news that the band’s solitary creative force has spent lockdown alone sweating over another work of obsessive genius.

The Sophtware Slump was an astonishingly ambitious and frighteningly prescient record that elevated Grandaddy from cult obscurity. Critics called it “America’s OK Computer”. Not quite a concept album, its 11 majestic DIY symphonies lamented the uneasy co-existence between technology and nature at the dawn of the new millennium. “Tire scraps on federal roads look like crash-landed cows,” sighed Lytle, surveying a post-apocalyptic future where abandoned Earth’s national forests were littered with domestic appliances, the casualties of planned obsolescence. It was all too much for Jed, the album’s lonely android, who drank himself to death.

To mark the record’s anniversary this autumn, at the suggestion of Grandaddy guitarist Jim Fairchild, Lytle embarked on a complete reworking, stripped back to piano and vocals, as part of a deluxe 4LP boxset. “We wanted to do something celebratory,” he recalls before revealing perhaps inevitably, “it was a lot tougher than it needed to be”.

There hasn’t been a new Grandaddy album since 2017’s Last Place, the same year bassist Kevin Garcia died at the age of just 41 after suffering a stroke. The band split in 2006, before reforming briefly in 2012. They’ve been through financial hardship, heartbreak and protracted record-label wrangles, while Lytle’s love of the great outdoors has seen him move from California to Montana, Portland Oregon and back again. 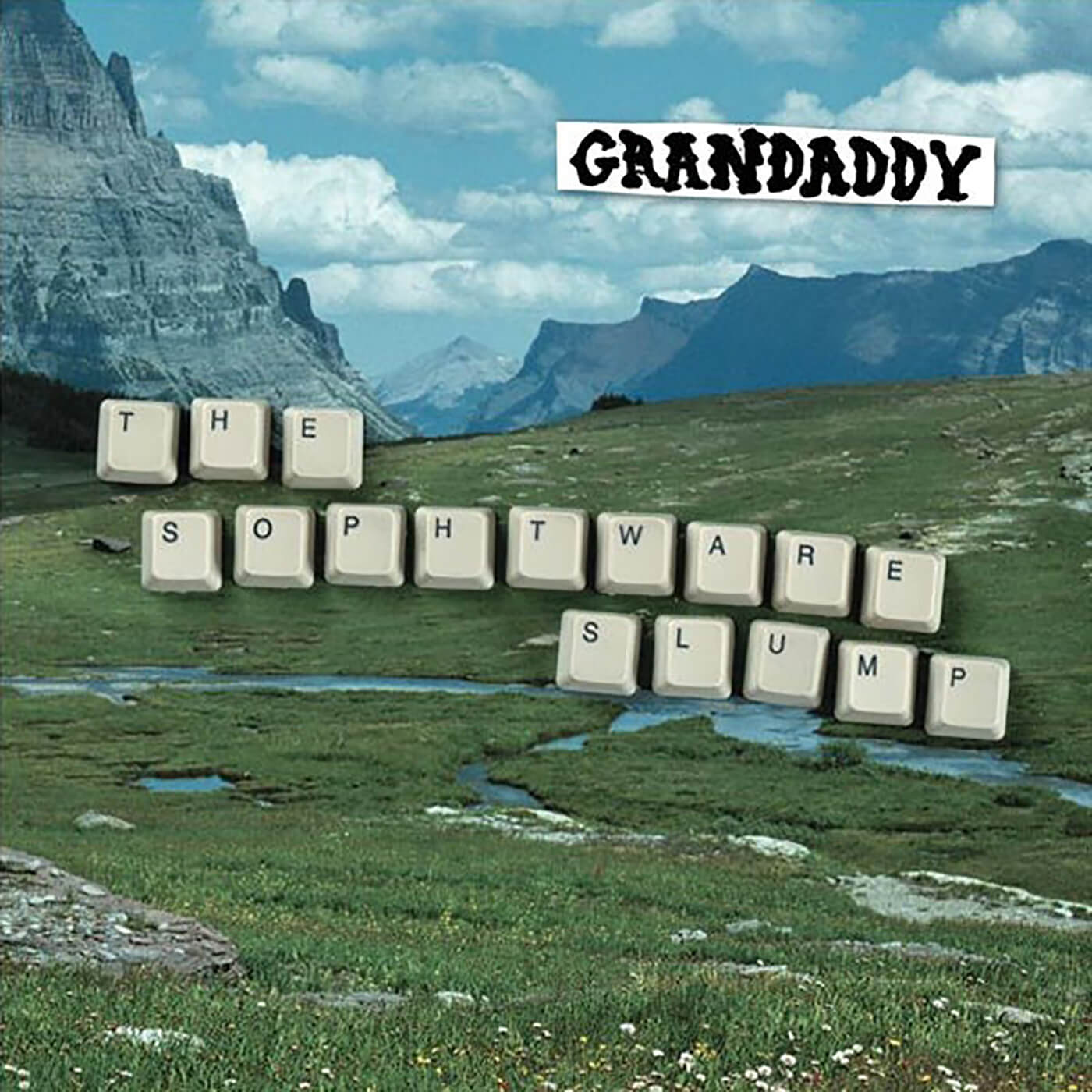 The one that I want

Yet one thing, aside from his at times unhealthily obsessive focus, has remained constant. Lytle, warm, humorous and self-effacing throughout our 30-minute conversation, describes the late-70s Jazzmaster watching over us from the corner of the room as “my only guitar”. Given to him by the band’s label Will Records in 1997, it’s been his companion on every tour and album since.

“We had a whole bunch of gear set up in this really crappy part of town,” Lytle recalls of the band’s early struggles in Modesto, California, where he had been a professional skateboarder before a serious knee injury ended that fledgling career at the age of 20. “Someone broke in and stole all this gear, 12-strings, some acoustics, a couple of electrics, it was devastating. There was a period of time when I was playing borrowed guitars for any live shows we did.

“That whole label thing was a nightmare, but the guy from the label, as a signing gift, gave me this wood-grain Jazzmaster. It’s the most rock-solid guitar. We’ve modified it with stable hardware, but I’ve never really had another guitar. I’ve played it all over the world, hundreds upon hundreds, coming up thousands of shows. I’ve never broken a string.” 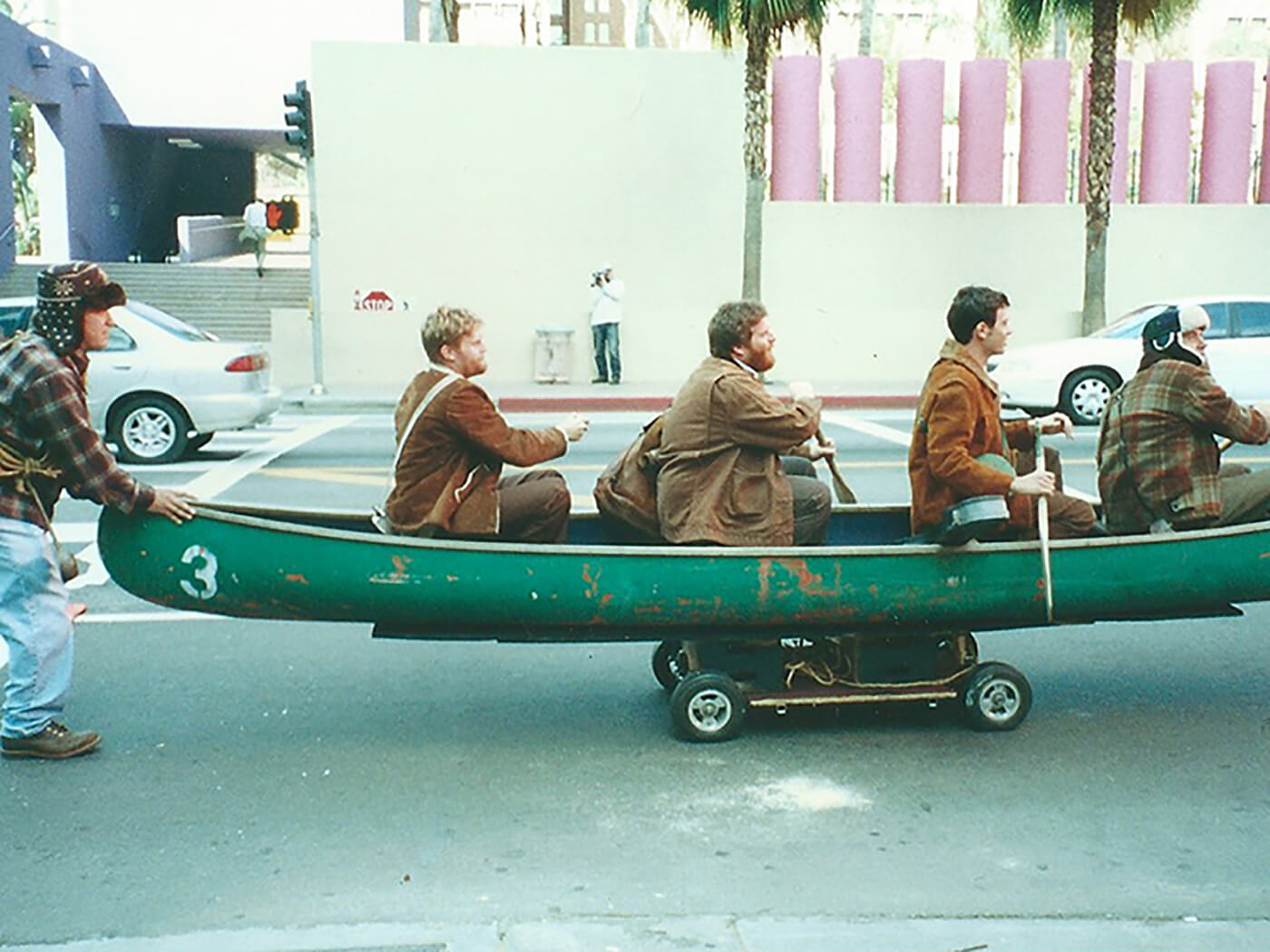 Aside from a Martin 000-15 and a Heritage semi-acoustic he uses occasionally for recording, the Jazzmaster remains Lytle’s go-to instrument, and it was perfect for the guitar parts on the original Sophtware Slump.

“It sounds flat and woodsy, a different kind of woodsy from that over-accentuated springy thing a Stratocaster does,” says Lytle. “In my mind, it’s so much more sculptable with pedals. A lot of what I was going to do with Grandaddy would be leaning on pedals and EQ. I just wanted something flat and mouldable, that was my approach from the beginning and I still stand behind it.”

That indestructible Jazzmaster was the only guitar on the album, plugged into a 4×10 Mesa/Boogie amp, with a Tech 21 SansAmp and a DOD FX55B Supra Distortion providing the hearty growl that reared up in devastating fashion on The Crystal Lake and Broken Household Appliance National Forest. “The DOD was the Grandaddy pedal forever,” says Lytle. “It was dirty and crunchy, the closest I could get to sounding like Neil Young and Crazy Horse, that really disgusting, gnarly distortion that was still very notey, very fuzzy but still with enough note in it. It had a low-end that I was having a hard time finding in other pedals back then. You couldn’t get that low-end from a Metal Zone.”

Of course, there are no guitars on The Sophtware Slump… On A Wooden Piano – Lytle’s reworking of their masterpiece using just the aforementioned instrument that forms part of the anniversary box-set celebration. The original album balanced the Jazzmaster’s woody tones exquisitely with the crackle and fizz of an ever-shifting chorus of synths and lo-fi keyboards that Lytle planned to return to Best Buy as soon as he’d finished recording. Why the decision, then, to radically reinvent the band’s most acclaimed work on a single instrument?

“The idea was Jim’s,” says Lytle, whose adventures in music began on the drums. His guitar playing followed a “traditional route” before he “learned on accident that there were certain guitar players that were very interesting sonically and soulfully.”

“I was a huge Queen fan when I was younger and Brian May was always pushing the limits in the studio. To this day, I’m a huge Billy Gibbons fan, too,” he adds. “20 years ago, when I was embarking on recording the album, I’d said to Jim, ‘I’m ready to start recording now, I can play the whole album from beginning to end on the piano’. We ended up brainstorming and arrived on this suggestion of, ‘man, you should try to record the album on piano’. I was a little nervous, as there were parts of it I could wrap my head around, and others… I don’t know.”

Covid lockdown meant initial plans to record in one of three LA studios Lytle had shortlisted were abandoned, and he once again found himself locked away in the sweltering heat of a makeshift home setup, hurtling towards a looming deadline. The irony is not lost on him.

“I appreciate that sort of thing lots,” he says with a gentle laugh. “In a weird way, I feel like that’s how Grandaddy is going to end at some point, very similarly to how it all started. I was laughing about it: ‘not a whole lot has changed, I’m in the same position that I was’.”

Forced into another DIY recording on the Baldwin upright piano he acquired 13 years ago in Great Falls, Montana, there were challenges. Outside the window of Lytle’s home in Glendale, at one end of LA’s San Fernando Valley, were the obstacles of traffic, leaf blowers, helicopters… “There were parrots… you name it,” he says in good-humoured exasperation. “At one point, I had a list of 20 things I was dodging and having to work around, picking certain points of the day. The time during the day when you could get some recording done had shrunk to this pathetic little window.”

Some songs, such as the already austere Underneath The Weeping Willow, leant themselves more immediately to piano reinterpretation, while the sparse arrangements have brought an even greater poignancy to the lyrics of others, such as Jed The Humanoid. Eight-minute opener He’s Simple, He’s Dumb, He’s The Pilot takes on a whole new life stripped back to analogue quietude.

“To be honest, converting the guitar parts to piano is a normal practice of mine,” Lytle says. “If I’m writing something on the guitar, once I feel I’ve got the song pretty well fleshed out I’ll gravitate over to piano, just to see what gets revealed. I end up hearing more harmonically rich things happening when I’m playing the piano and searching for where it’s going to lead me. It wasn’t a total stretch, and sometimes I see it as a nice exercise, continuing to learn music.”

Man on a mission

Delving back into the album on Spotify naturally stirred memories of the original sessions, too. Grandaddy has for a long while existed as a band only in the live arena, with Lytle recording alone. Back in 2000, he hired a farmhouse in the wilds of California and worked in total isolation, often hungover, sometimes stripped to his boxer shorts, in extreme temperatures. It was a war of attrition, and a pivotal juncture for the band, desperate to escape the cloying self-doubt that dogged them at home in Modesto.

“I was a man on a mission,” he remembers. “I felt like I had something to prove. There’s an inferiority complex that comes with being from where we’re from that was driving a little bit of that, and a lot of it was just who I am as an individual. I embarked on this whole music thing with no safety net or backup plan and it was all or nothing. There’s something to be said for that sort of desperation.

“I was hyper-focused, tucked away in this little farmhouse overflowing with gear. I had very specific things I was after and I would work these very feverish periods and then crash and burn. I would send stuff along when I considered it listenable to the other guys and get a little moral support back.” 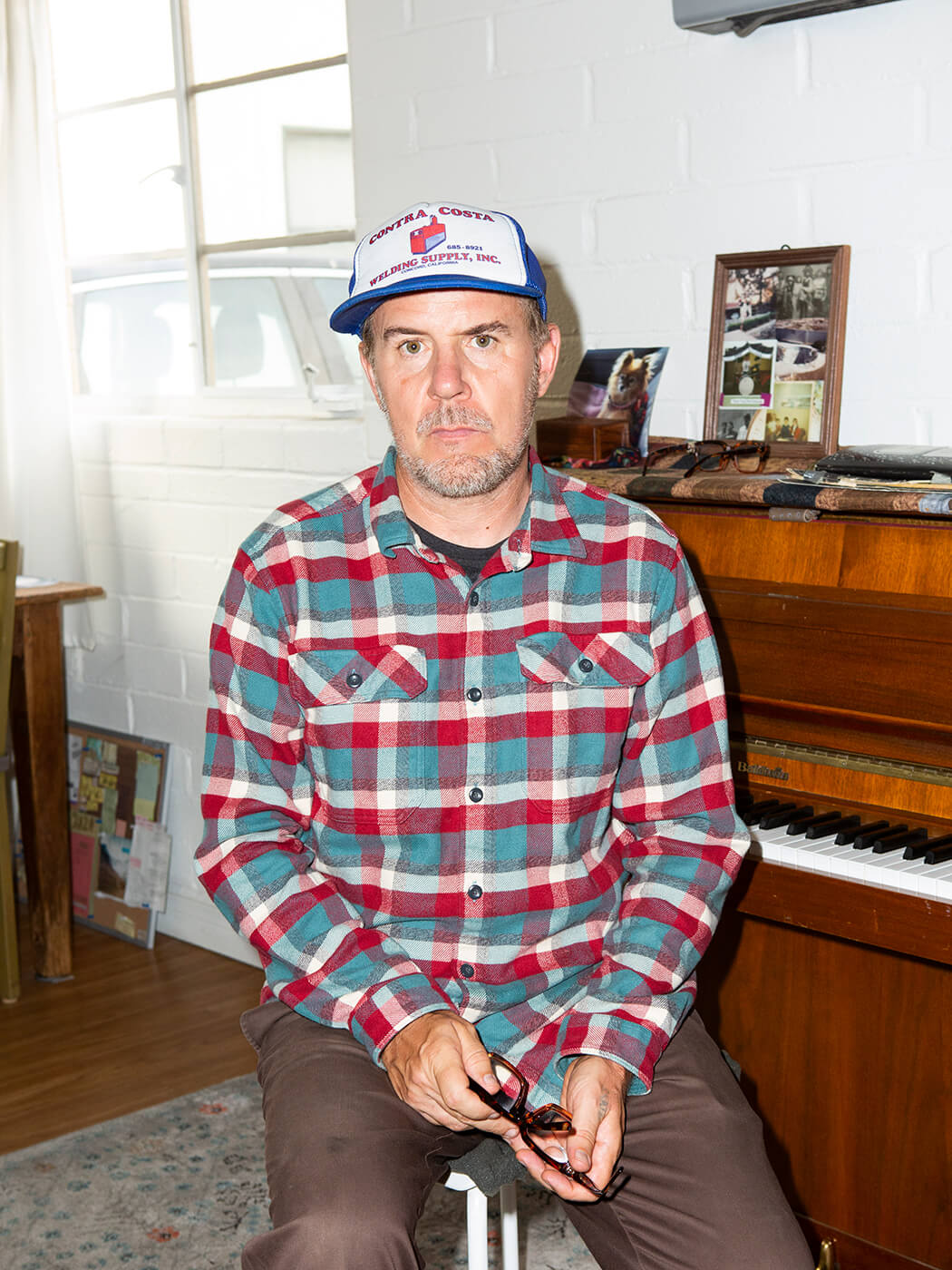 The result was an emphatic vindication of Lytle’s determined vision and the themes remain worryingly apposite today. Pitchfork’s initial review of The Sophtware Slump described it as “the point where the deflated myth of the American West met the deflated myth of technological salvation”. Two decades since Lytle documented “the confusion and uncertainty of where we’re headed”, some would argue things have only got worse. Does he feel any more optimistic in light of recent developments in the US? A long pause ensues. “Err… we seem to be making small strides and it’s definitely a lot more hopeful now,” he offers. “It was looking pretty bleak there.”

And with the news that Lytle is working on new songs again, should we be hopeful that Last Place was in fact not the final Grandaddy album? There’s another heavy silence before he responds. “We’ve moved physically so far from each other, and there are only two of us still making music as a career, but I’m still working on stuff. I was so worried about having to steep myself in all this nostalgia about The Sophtware Slump that I thought it would be nice to release something new at the beginning of the year. I have a Grandaddy single that I’m going to release. Eventually, further into the year, I have another record I’m making.”

It sounds as if Jason Lytle will again be working alone on this next labour of love, and this time perhaps it truly will be the end of the Grandaddy story. “I got so wrapped up for so many years in feeling like there had to be something big I was obsessing over,” he admits. “It’s like a crime detective, they’re always trying to solve the case, and you kind of get addicted to it. I need to move away from that, because it’s not healthy for me.”

It may not be healthy for him, and you can bet your last dollar that making the next Grandaddy album will be tougher than it needs to be, but you can be equally certain that alongside Jason Lytle every step of the way will be his eternal companion, that rock-solid, late-70s Fender Jazzmaster.

The Sophtware Slump 20th Anniversary edition is out now on V2.