“There’s so much going on that it flattens out into this layer of dread and terror”: Jeff Rosenstock on modern America

The punk troubadour continues to confound expectations with his surprise new album No Dream. We spoke to the Long Island native about chaining fuzz pedals, why there’s no such thing as perfect tone, and trying to sleep while the world’s falling apart.

Jeff Rosenstock’s music is about energy. It’s about the communal sweat of punk shows, and the buzz in the room during a live take. But on his new record No Dream, it’s also about finding out more about yourself when that power source is shut off.

Rosenstock’s past two albums, 2016’s Worry and 2018’s Post-, won acclaim for their empathetic readings of the Trumpian horrors of modern America as much as they did their pin-sharp melodies and blown out leads. No Dream’s focus is both more introspective and more open-ended.

“On Worry, I wanted to have a conversation about whether love and capitalism can thrive in the same environment. Post- was trying to have a really raw, direct reaction after something very bad happened,” he says along the line from Los Angeles, his new home after years as a pillar in the Brooklyn punk scene.

“This one came together over a long period of time. It deals with a lack of clarity that I had about life, myself, and how I treat people. There’s a lot that I didn’t have time to understand by being on tour, and not really existing in an environment that wasn’t either watching paint dry in a van or a very intense, high energy situation. I felt like I was bouncing back and forth.”

Rosenstock has been playing in touring bands half his life, firstly with the Arrogant Sons of Bitches and Bomb The Music Industry!, and as a solo artist since the release of We Cool in 2015. It’s a grind that takes its toll, as he admits on No Dream standout State Line. “So long, been staying home less than leaving,” he sings.

“I’ve always disliked songs about being on the road – I miss my lady back home kinda shit,” he says, having largely taken 2019 as a fallow year touring-wise. “I was thinking about how I could be honest about what my life has been like for the last three or four years without making it feel cliche.

“If you’re doing this stuff, your mental health is suffering, you’re sleep deprived, and it gets to a point where you just don’t know where the fuck you are, or why. The world is burning down outside the show and you’re like, ‘What the fuck am I doing?’ That song was about trying to remind yourself why you’re doing it, and remaining grateful.”

No Dream situates this seam of self-appraisal in the overwhelming here and now. The title track unravels from a picked guitar riff towards a thrashing conclusion as Rosenstock watches immigrant kids being ripped from their families and caged, and the gun lobby’s fingers tightening around government lapels. “Crank the white noise and pretend that we’re asleep,” he sings, repeating with increasing urgency as the song gathers pace. “It’s not a dream, it’s not a dream.” 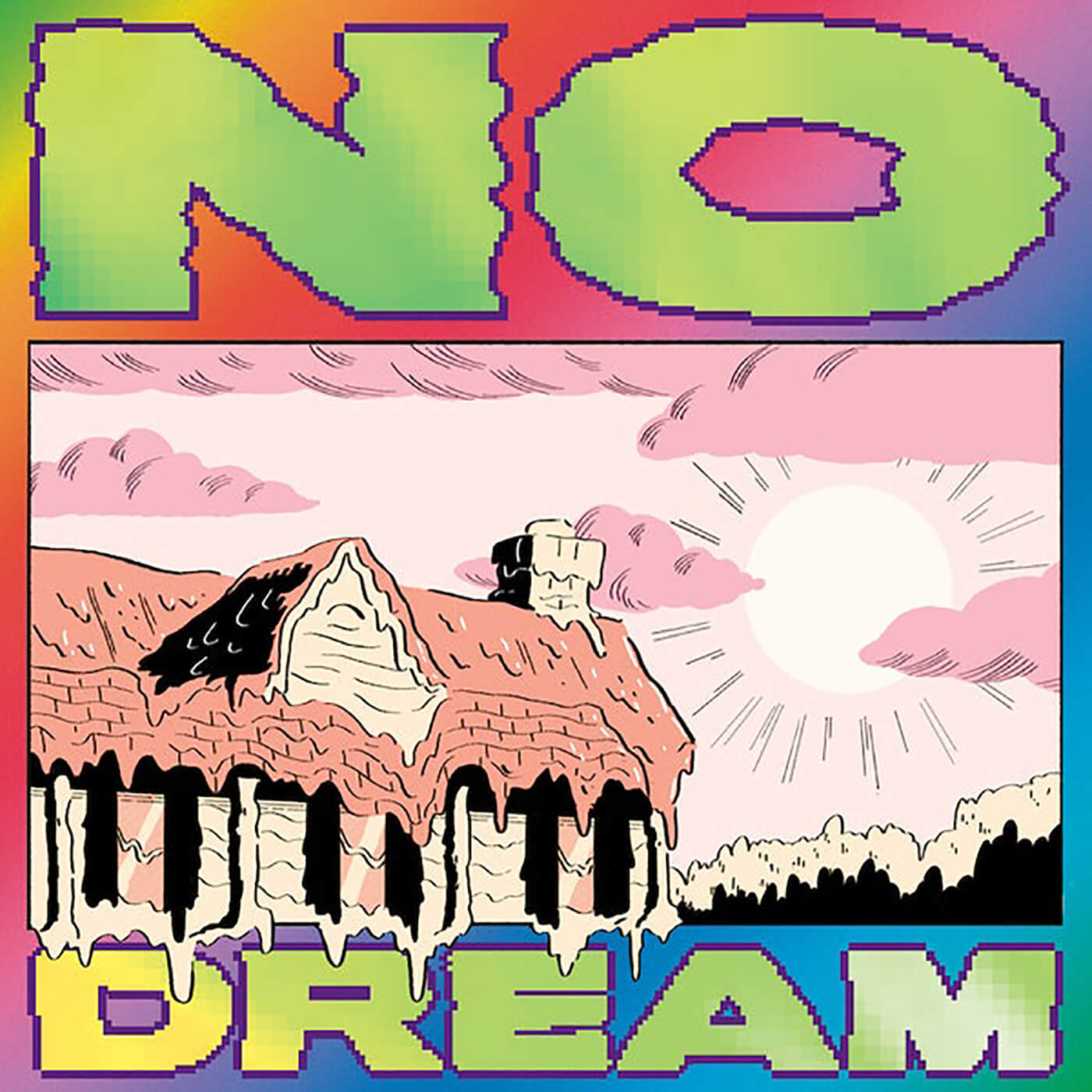 “If I can’t sleep, I listen to white noise on my headphones,” Rosenstock says. “It just blankets everything, and it can calm you down. That is what it feels like every day⁠ – there’s so much going on that it flattens out into this one constant layer of dread and terror. It seems like it’s impossible that it’s happening, but it is happening.”

The thing about No Dream, though, is that it’s deliberately both entirely serious and a lot of fun. It’s fast, snotty and acerbic. It’s full of chugging riffs and massive hooks. Alongside a band stacked with road-hardened lifers⁠ – guitarist Mike Huguenor, bassist John DeDomenici, drummer Kevin Higuchi, and Dan Potthast, who splits his time between acoustic guitar and keys⁠ – Rosenstock has built another punk record that reminds you why you liked punk records in the first place.

Rosenstock spent his time at home in the past 12 months revisiting old notebooks and skeletal ideas⁠ – the closer Ohio Tpke has been around since 2016 in one form or another⁠ – before assembling No Dream in gaps between his work scoring the Cartoon Network show Craig of the Creek. “I try to always stay in a good flow of writing,” he says.

“I’ve been thinking about Craig of the Creek in that context a lot. I just feel very thankful that I have this outlet for being able to make the amount of music that I naturally would like to make. It’s cool that I have a landing place for this energy that’s inside of me.”

Once No Dream had taken shape, Rosenstock and band decamped to Atomic Garden in Oakland to record with producer Jack Shirley, who has worked on each of his solo releases including last year’s stellar live album Thanks, Sorry!.

“Jack’s our guy, man,” Rosenstock says. “I feel like the more we get to know each other the more we argue in a very familial way. He knows how to record our band. My two cents is that there is nobody better at taking a band in a room, putting microphones in front of their shit and being like, ‘Cool, play it.’ It’s going to sound good.”

Rosenstock’s solo records are tracked live, butting up against his meticulously home-produced work on Craig of the Creek and with Antarctigo Vespucci, his power-pop project with Chris Farren, who guests on No Dream alongside long-time collaborator and Bomb The Music Industry! alum Laura Stevenson.

“The nice thing about working at home is that it really gives me a lot of time to experiment,” he says. “That’s something I’ve liked doing since I discovered MIDI when I was a kid. At Jack’s, that’s totally different. We go in super prepared, so it’s about getting the energy right. It feels like a high wire act because if you’re playing a song that’s six minutes long you don’t want to fuck up in minute five.

“There are songs that have feedback jumping in and out, so you kick your distortion pedal on and it’s broken…  fuck! But when a take is successful and it feels good, it’s sick. You don’t have to do the song five more times as you multi-track, trying to pretend you’re playing with a person when really you’re playing with a stereo image in your headphones.”

Huguenor, meanwhile, is a fixture of the punk scene that orbits Mike Park’s Asian Man Records as a member of Shinobu, Hard Girls and Classics of Love, where he backed Operation Ivy vocalist Jesse Michaels. He readily echoes the sentiment about Rosenstock’s band doing their homework before recording.

Generally, they are presented with fleshed out compositions in their rehearsal space, and it’s up to them to find a way in. “Jeff really does orchestrate very clearly ahead of time,” Huguenor says. “He’s one of the most fully realised songwriters I’ve ever met.

“By the time they get to me, not only are the songs fully written but they often have a lot of leads and melodies. I try to find spaces where there’s a bit of light showing through, where there’s room for melodic improvisation. A lot of what I’m playing is fairly spontaneous and usually there’s a good amount of variation on each take.”

HEY Y'ALL! WE'VE GOT A FEW CHEAP SHINOBU MEGA PACKS ON SALE IN THE WEBSTORE (LINK IN PROFILE) THESE RECORDS ARE GREAT ALL PROCEEDS FROM THE SALES OF THESE PRODUCTS WILL BE DONATED TO FAMILY SUPPORTIVE HOUSING, FIGHTING TO END HOMELESSNESS IN SAN JOSE. Shinobu is one of my all time favorite bands, I like em so much that I've weaseled my way into playing in bands with (ALMOST!) all of em, including Shinobu itself a few times. There's also other Shinobu shit in the store, a few long out of print copies Antarctigo Vespucci's Leavin La Vida Loca and other stuff too! Also if you're wondering where your NO DREAM order is, we're still waiting on all the stuff to arrive and we're planning to ship by the end of the month! You'll get an email about it when it happens! TYSMLOLOLOLOLOLOLOL

While the records are defined by their lightning-in-a-bottle power, Rosenstock remains an overdub fan. Saxophone, synths, and additional acoustic guitars are all on the menu, along with a wall of fuzz. So much fuzz, in fact, that his albums serve as negotiations between that side of his sound and the songs’ melodic components. “Jeff is actively trying to make his guitar sound like it’s dying,” Huguenor observes, and Rosenstock isn’t about to deny it. “Mike is not as much of a fuckin’ trash demon as I am,” he laughs.

“I feel like I just keep pushing it further and further,” he adds. “I’ll have two or three fuzz pedals cranked up through an Ampeg V-4. I’ll be like, ‘Jack, are there notes in there?’ We don’t go, ‘Maybe we should turn the fuzz up on this one.’ We start with max fuzz and I try to convince myself that it’s cool.”

On No Dream Huguenor’s work was completed with his trusty Jazzmaster, which has been modded with an SG bridge, while Rosenstock brought the whole gang along. After years spent agonising over what gear would fly with him from New York to the west coast, this time he drove up from Los Angeles with his 1972 Telecaster Deluxe, a Vintage Jazzmaster with a “a big Johnny Marr whammy bar vibe” and his secret weapon, a Japanese Jaguar baritone. “I’m sad they stopped making it, and I’m so happy I have two of them,” he says. “I love that guitar. It sounds so fuckin’ brutal.”

Talking about music with Rosenstock is fascinating because everything’s connected. No Dream’s lyrics tell us to stay focused and engaged, while the songs turn on a dime to keep us on our toes. From amp settings to each screamed refrain it’s all out there, no bullshit. “I don’t think there is a perfect tone,” he says. “I think there’s only a truthful tone to what the amp is in the room at that moment in time.”

Jeff Rosenstock’s new album No Dream is out now on Specialist Subject/Polyvinyl, and as a donation/free download from Quote Unquote.