“I remembered why I started doing this and how much it means to me”: Joanne Shaw Taylor on how taking a break helped her find her passion again

After using the pandemic lockdown to heal from 13 non-stop years on the road, Joanne Shaw Taylor took the opportunity to turn her dream of creating a blues cover album into a reality by teaming up with Joe Bonamassa and Josh Smith.

Joanne Shaw Taylor might spend a fair amount of time Stateside these days, but it’s clear that the guitarist hasn’t lost a drop of her Midlands accent as we Zoom with her from Detroit. Like many of us, she spent most of lockdown in front of the TV, though the rare downtime also gave her chance to learn to cook, and it also allowed her to percolate the idea of her latest album, a collection of blues covers simply titled, The Blues Album.

“I consider myself a blues guitarist but I don’t think any of my albums have been particularly blues-y,” she tells us, long blonde hair flipped to one side, with a quirky caricature of Albert King in the background. “I didn’t think I could write blues songs, so it was something I’d always wanted to do but felt like my vocals weren’t quite good or mature enough. It gets ignored a lot, I think people focus so much on how prominent guitar playing is in blues that they forget people like BB King and Albert King were amazing singers so it was important to cash up for that.”

The album was conceived during the height of the pandemic, through coversations with her friend and fellow blues-guitar stalwart, Joe Bonamassa. “I started talking to Joe most Fridays, having a glass of wine and putting the world to rights,” she recalls. “I told him I’m gonna do a blues cover album ‘cause I always wanted to, and my voice was well rested so I started sending him ideas.”

Taylor candidly admits how the enforced downtime gave her the sort of break she’s rarely had the luxury of in her hard-working career, and enabled her to recharge her batteries in a way that was transformative.

“That was really good, connecting to what was important and just having time off” she explains. “I didn’t touch a guitar for the first 10 weeks. I think it’s the first time I remembered why I started doing this and how much it means to me.” 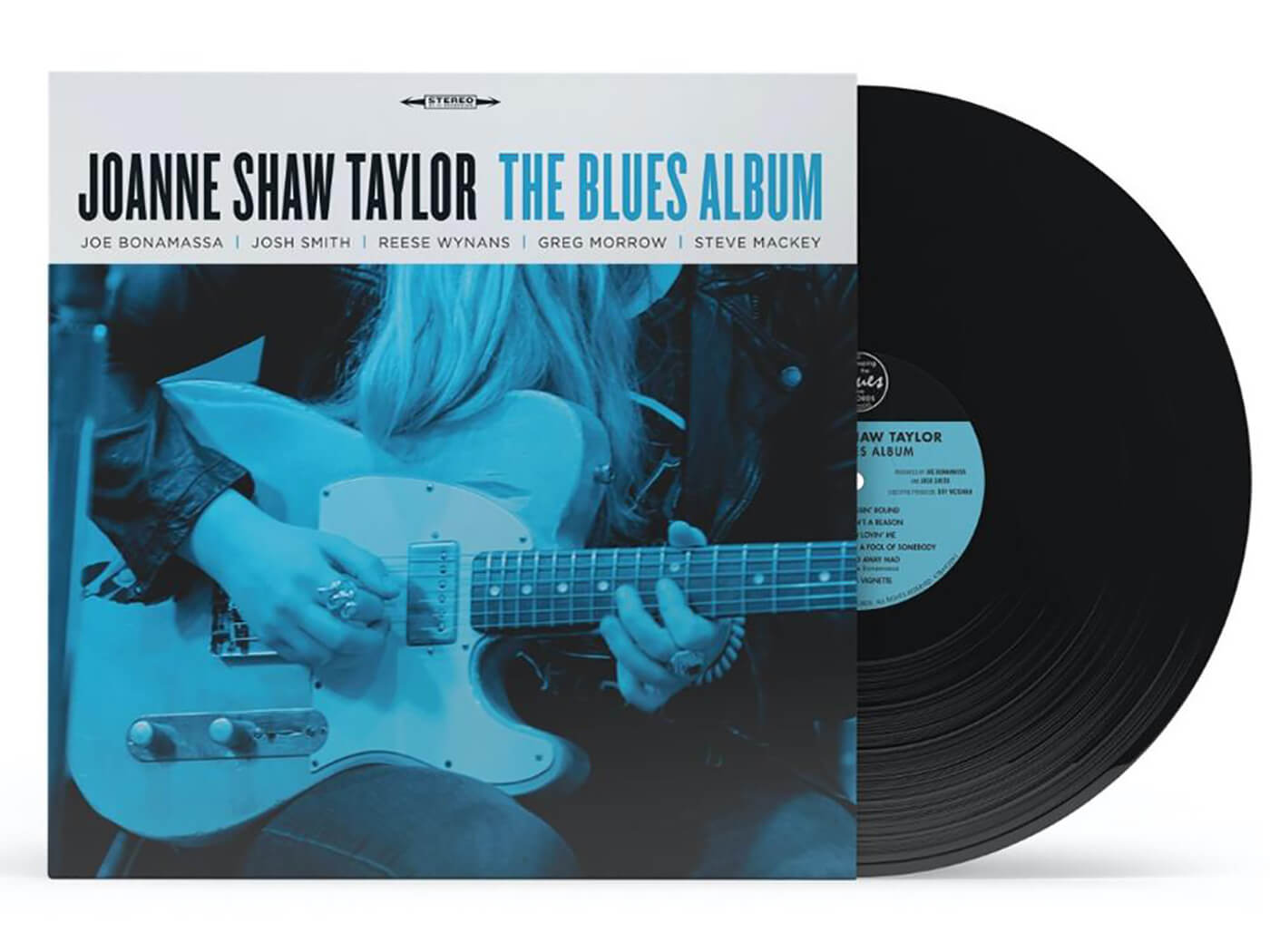 The time off clearly gave Taylor some perspective, and having found her passion for guitar again, determined that friendship and self-care were vital ingredients in the process of getting back to music.

“I’d had some good rest and was excited to get back, but I made the decision that whatever I did from now on I had to look after myself better,” she affirms. “Joe’s my best friend so it was great to go down to Nashville to stay with him and record the album. It’s like working with family.”

The pair may musically collaborate like a dream, but the culture divide provided her with some very entertaining commentary whilst they binge-watched TV: “I got him into watching The Crown which was quite an achievement!” she exclaims. “We had to pause every 10 minutes as he kept asking questions like ‘the Queen’s dead?’ – no!”

It’s entirely fitting then that Shaw is now signed to JoBo’s new record label KTBA (Keeping The Blues Alive), moving on from Sony’s Silvertone imprint, which she joined in 2018. “I never imagined signing to a major label, it just kind of fell in my lap,” she reflects. Moving out of the major label orbit is always a risk, but she knew the time was right and felt that working with Bonamassa and his longtime manager Roy Weisman at KTBA would be the best way for her to realise her creative vision.

“I’ve been signed to labels that pretty much just leave me alone and let me do what I wanna do which is pretty sensible on their part really,” she mischievously chuckles. “Do not get in my way! I love Sony and my time there was brilliant, but I’ve known Joe and Roy for 15 years. I spoke to my dad about it and he said, ‘I trust Roy more than I trust you to be honest love’ – thanks dad!”

The decision to switch was clearly a good one, as Taylor worked with Bonamassa and co-producer and session ace Josh Smith to push her as a vocalist, while the sessions at Nashville’s Ocean Way Studios also gave her the chance to tick off a big box on her bucket list, thanks to the addition of regular Bonamassa Reese Wynans on keys.

“He was a hero of mine,” she gushes. “He used to play with Stevie Ray Vaughn who is the guy that got me into guitar, so having him in the studio was really weird – to think of being that 12-year-old girl in Solihull thinking, ‘I wanna live in Texas and be a blues guitarist and play with Reese Wynans!’”

With such great collaborators in the studio, Taylor opted to keep things stripped back on the gear side of things, but equally high quality.

“We wanted to use a very simple set up,” she explains. “No pedals, just get a really good live tone and then carry that through the whole album. I took down my main guitar, which is Junior, a ’66 Esquire, and then plugged into a Dumble Overdrive and a ’62 Deluxe.”

The Blues Album is an eclectic and varied album that pays due reverence to the greats of the genre, but in a way that eschews the obvious choices in preference for covering rare gems by the likes of Albert King, Peter Green and Aretha Franklin. When it came to choosing the album’s first single, Let Me Down Easy originally by Little Milton, was the cut that spoke most to Joanne.

“There were six tracks we could have chosen from, but that was the most upbeat one,” she says. “You never wanna lead with a ballad in case people think you’ve turned into Norah Jones, it’s up-tempo, it’s funky and one of my favourite songs.”

Like most other artists, the time has come for Taylor to head back on tour and while the extended break helped her to re-centre her love for music and prioritise her mental health, the time away also gave time for the nerves and anxiety to set in at the prospect of playing out again after such a long time.

“I was definitely having panic attacks about having to go back to it,” she explains, “But I think it was partly knowing what frame of mind I was in when I stopped.”

Sensibly then, she decided to have a small warm up at a private event back in July and with her whistle whetted for the thrill of live music, the nerves have been replaced with excitement.

While we’re chatting about getting back to gigging and everything that entails, we hit upon a less enthusing aspect – the sexism that Taylor faces as a woman carving out her place in the extremely male-dominated world of blues guitar.

“People say ‘You’re my favourite female guitarist.’ What does that even mean?
I don’t play guitar with my ovaries”

“People say ‘you’re my favourite female guitarist,’” she sighs. “What does that even mean? I don’t play guitar with my ovaries, it doesn’t affect what sound it makes!” As any woman who plays guitar or enjoys guitar music can likely attest, even wearing the merch of a band you like isn’t without its challenges. “’Name three songs?’” she scoffs, laughing. “Why don’t I play them for you instead?” There have even been times when she was mistaken for someone’s girlfriend when talking to her own fans.

“I took my drummer Perry to a gig and we left through the band exit, there were some fans and they recognised Perry and started talking to him about Joanne Shaw Taylor and I was standing right next to him,” she explains, telling us how every time she tried to join in with conversation she was ignored, “His wife had noticed that I was Joanne, she was smiling at me whispering ‘I’m so sorry!’”

But above all, with the album now on the shelves and her batteries recharged, Joanne Shaw Taylor is ready to head back into performing with a clearer state of mind and a buzz for the blues. Her cheeky humour, positive spirit and gratitude for who she is and where she is today is maybe just what we need to be surrounded by as we re-enter the world of gigs and live music. However, she has one last, very important message about the album: “If you don’t like it, it’s Joe Bonamassa’s fault!”

The Blues Album is out now on KTBA Records.