“I have no interest in copying another guitar”: Joe Knaggs on his guitar-making ethos

After 25 years as production manager and designer with one of the most successful guitar brands of the modern era, Joe Knaggs decided to take his vision directly to the people. 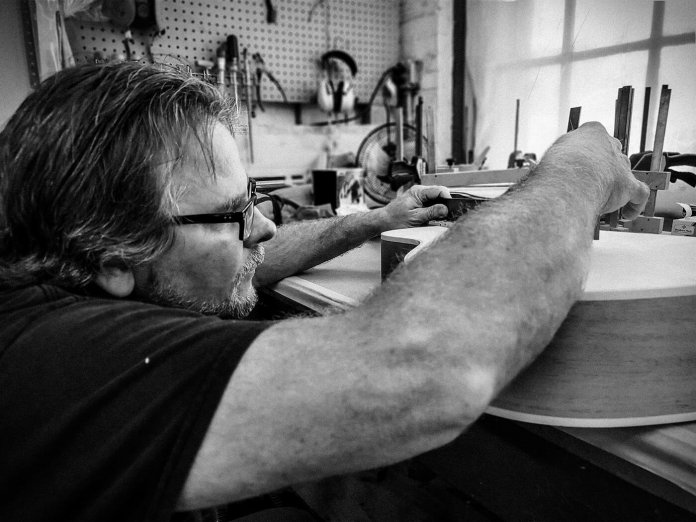 Few guitar makers have jumped straight into the boutique market after such extensive experience with a major manufacturer so confidently as Joe Knaggs, or have received such immediate kudos for having done so. After 25 years with Paul Reed Smith Guitars – the majority of them as production manager – Knaggs departed the legendary Maryland-based company in 2009 to set up his own operation, alongside former PRS colleague Peter Wolf, who is now VP of global sales and marketing at Knaggs Guitars.

Stepping out from under an umbrella as broad as PRS’s can’t have been easy, but the flipside of that transition carries the vast experience in both guitar-making and customer relations – including a significant network of star artists – that Knaggs and Wolf took with them in doing so. And if it’s never easy launching a new business in the competitive high-end guitar market, Knaggs certainly made it look like a natural and even inevitable move. Stylistically distinctive and original, display-case-worthy yet eminently playable, Knaggs guitars have ably cut their own path these 10 years into the game, and moved surprisingly easily out from under what might have seemed a long shadow. 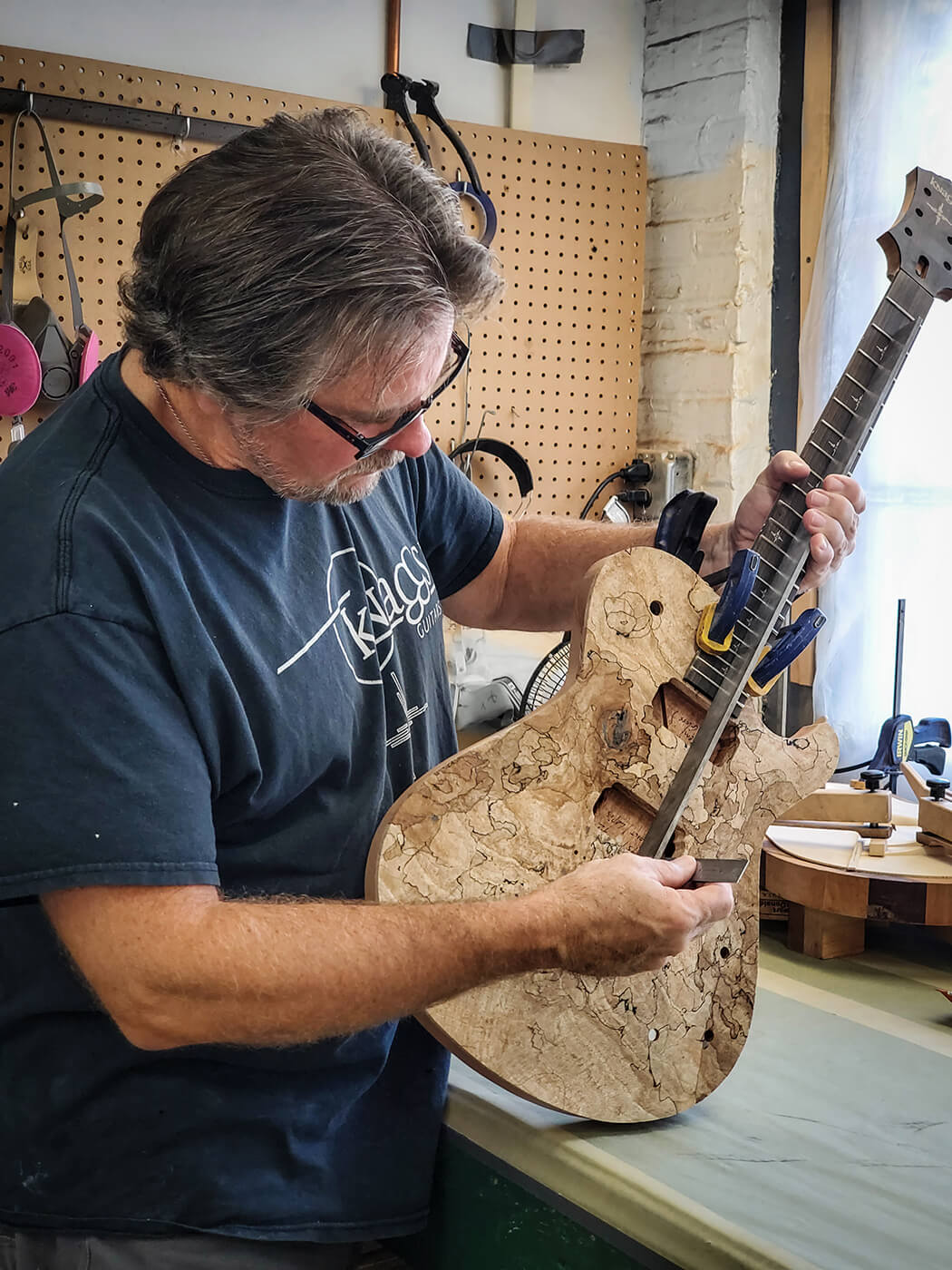 12 strings and the truth

Knaggs was born in 1962 in Washington, DC, and grew up 10 miles northeast in Bowie, Maryland – just down the street, as it happens, from an older boy named Paul Smith. Like so many in this business, he became fascinated with the guitar at a young age, and obsessive soon after.

“The first music I remember was Good Vibrations by The Beach Boys,” Knaggs recalls. “My sister had the 45, along with Hey Jude. I was five years old. Then I heard an Eagles song while I was playing pool with my long-time buddy Marc Izzi. I heard a 12-string guitar; that fascinated me, and somehow that sound got me curious about the guitar. I believe I was about nine or 10 years old.”

Before entering the industry himself, Knaggs developed a penchant for finishing in particular, a skill that would get him in the door just months after the official launch of PRS Guitars on West Street in Annapolis, Maryland.

“I learned a lot about chemicals, coatings, and wood treatment before I started,” says Knaggs. “I had finished a guitar for side money about a year before Paul started PRS Guitars. I brought it to Paul to see if they needed some side finishing, but Bud Davis was doing his finishing at that time. About a year later I received a call asking me to come over and help them with the finishing work. They were struggling to get guitars through the system. So, I started in October 1985 by running the finishing department and quickly went on to run the factory as production manager.” 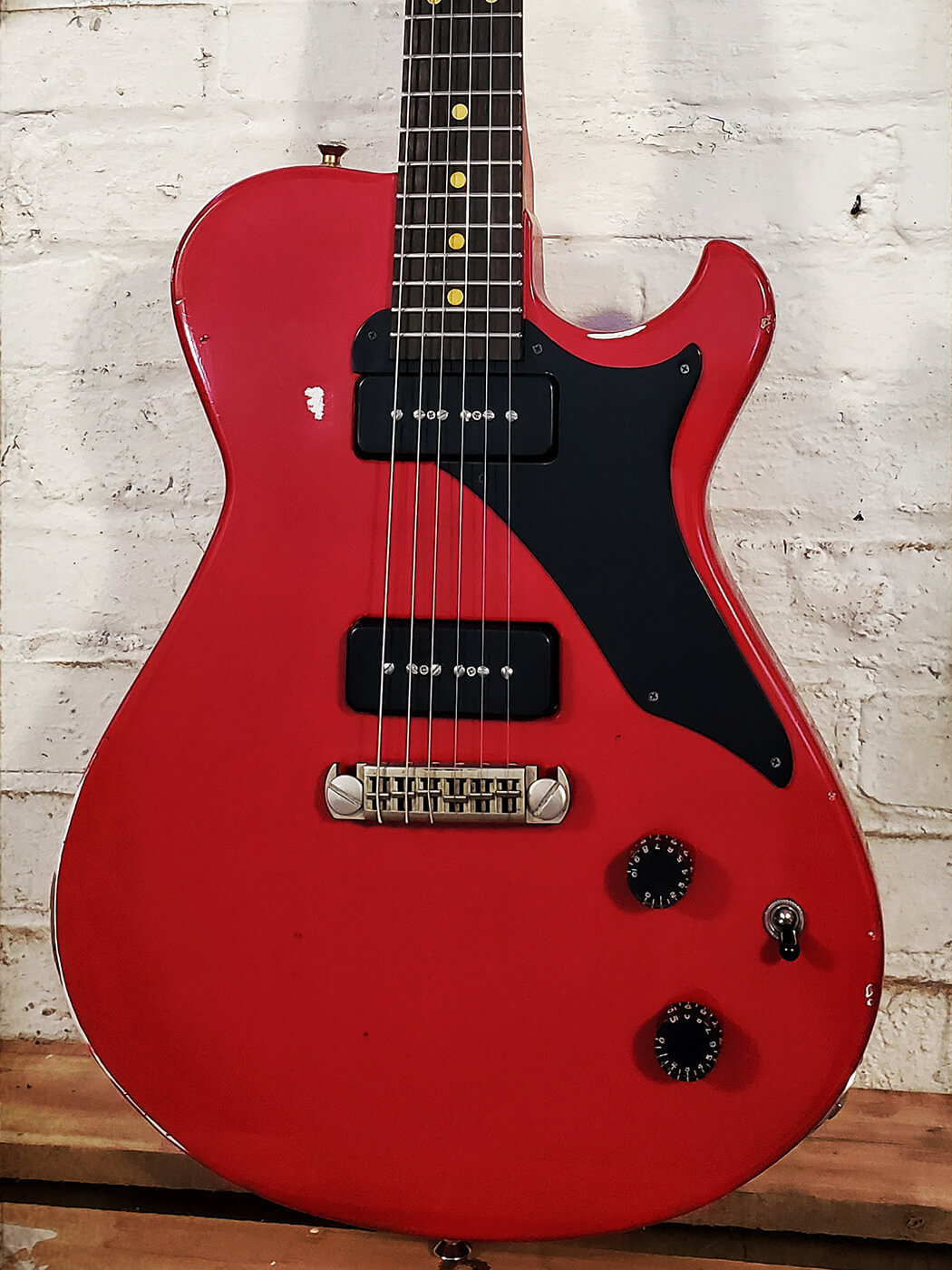 As his oversight of PRS production gradually incorporated more and more creative work, Knaggs realised he had something significant to express in the guitar world himself… even if he wasn’t quite sure what it was just yet. As he honed his initial ideas to a sharper edge, though, the effort found him originating some of the company’s more distinctive latter-day models in the process.

“I received my employee guitar and did not like it,” he recalls. “Then I made a semi-hollow version and it was okay, but still did not tickle my fancy. I was a huge George Benson fan and wanted a guitar like he played, so I went to Paul and said I wanted to make an archtop guitar. He said ‘go for it,’ thinking I was going to make a big archtop, but I took the existing PRS body shape and hollowed it out like an archtop, leaving the bridge block in for the stoptail bridge. It was a cool instrument that you could crank up without feedback, and we quickly developed a thinner version called the ‘Hollowbody.’ 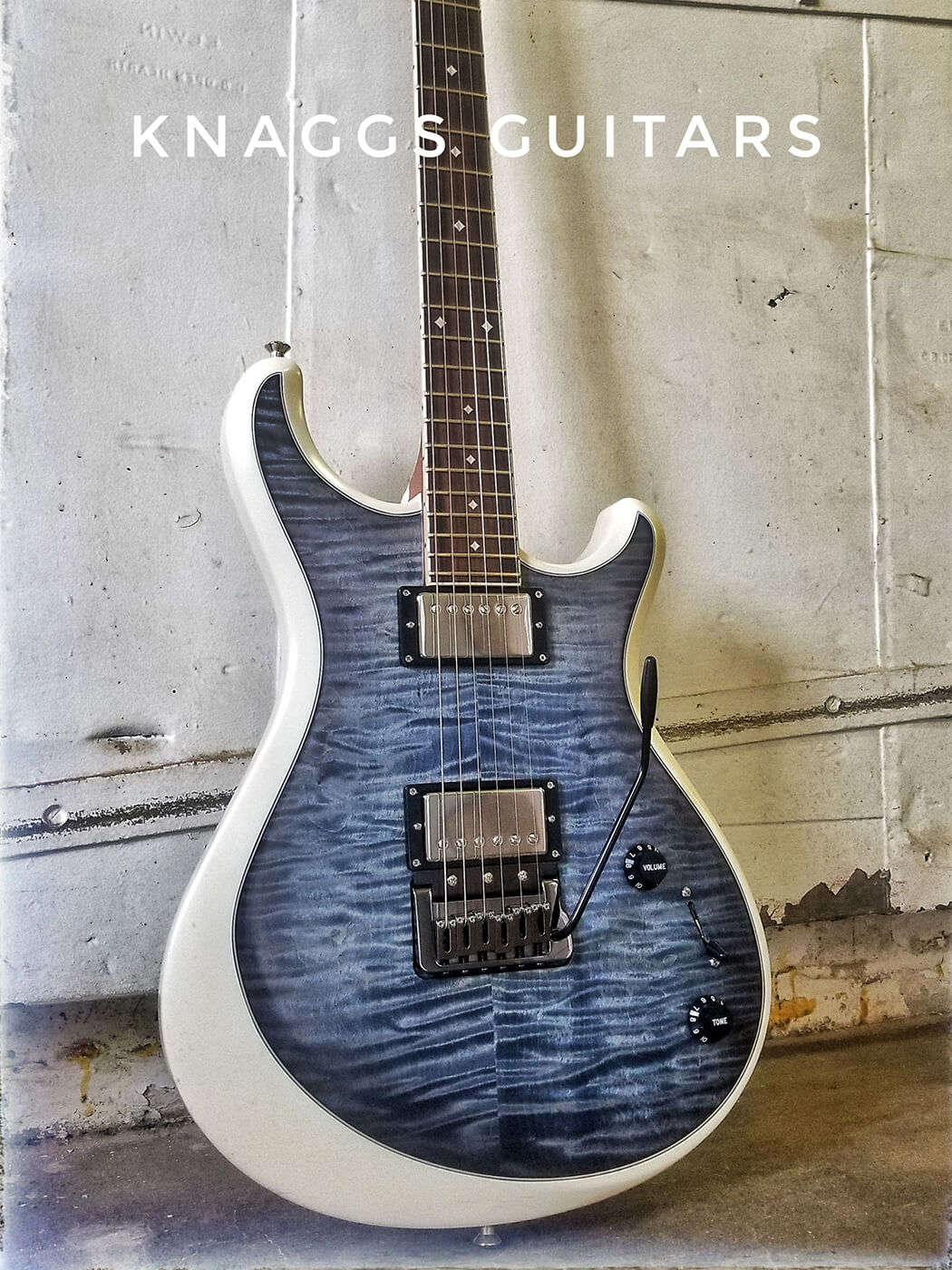 “The drawing and designing seemed to come naturally to me – I was an artist growing up – so I went on to design the SC, Mira, Starla, Gary Grainger Bass, Mandolin, and SC-J, along with tons of inlay designs and so forth for Private Stock. I felt the same way when developing the current Knaggs line of guitars.”

The decision to leave PRS didn’t come easily to Joe Knaggs, and for several years he still envisioned his own designs taking root via the company’s creations.

“I had drawn and built some prototypes of guitars that I personally would want to play,” he says, “and it was important to get them out there. We tried to bring them into PRS, but it did not work out, so after 10 years of contemplating the decision it was time to go and try it. I took a walk with my lovely wife and said, ‘What do you think?’ She said, ‘You will never know ’til you try!’

“At the same time, PRS was also heading in a different direction where we were having to put together PowerPoint presentations and shit like that. That was not for me. I wanted to make guitars.”

Even a cursory glance at a handful of Knaggs models will tell you this maker is doing things very much his own way, yet without any rebellious or radical departure from the traditional form. A hint at some elements gleaned from the PRS camp might be in evidence here and there, which is understandable, yet the overall impression is one of an elegant and original house aesthetic, which puts equal weight on the appeal of unique visuals and the veracity of hardware design.

Elements of the former include exotic woods, internal top purfling, and two-coloured tops, while the latter is perhaps best exhibited in the Knaggs Influence 2-in-1 bridge and string holder (kind of a one-piece tune-o-matic and stoptail combined), or the Chesapeake vibrato on his S-inspired models. Put it all together, and it makes for utterly distinctive branding. For all the originality, though, Knaggs’s own design philosophy sounds very down-to-earth.

“I design what I think looks, feels, plays and most importantly sounds good,” he says. “I have no interest in copying another guitar. That does nothing for me. While battling cancer I was lying in bed thinking to myself, ‘When you walk into a music store there are thousands of guitars. They all kind of look the same unless they are a freak shape.’ That is when I came up with the one- and two-purf thing; I wanted our guitars to stand out, but in a nice, artistic way. I wanted to be able to stain the maple top with two different colors and have it not bleed together.” 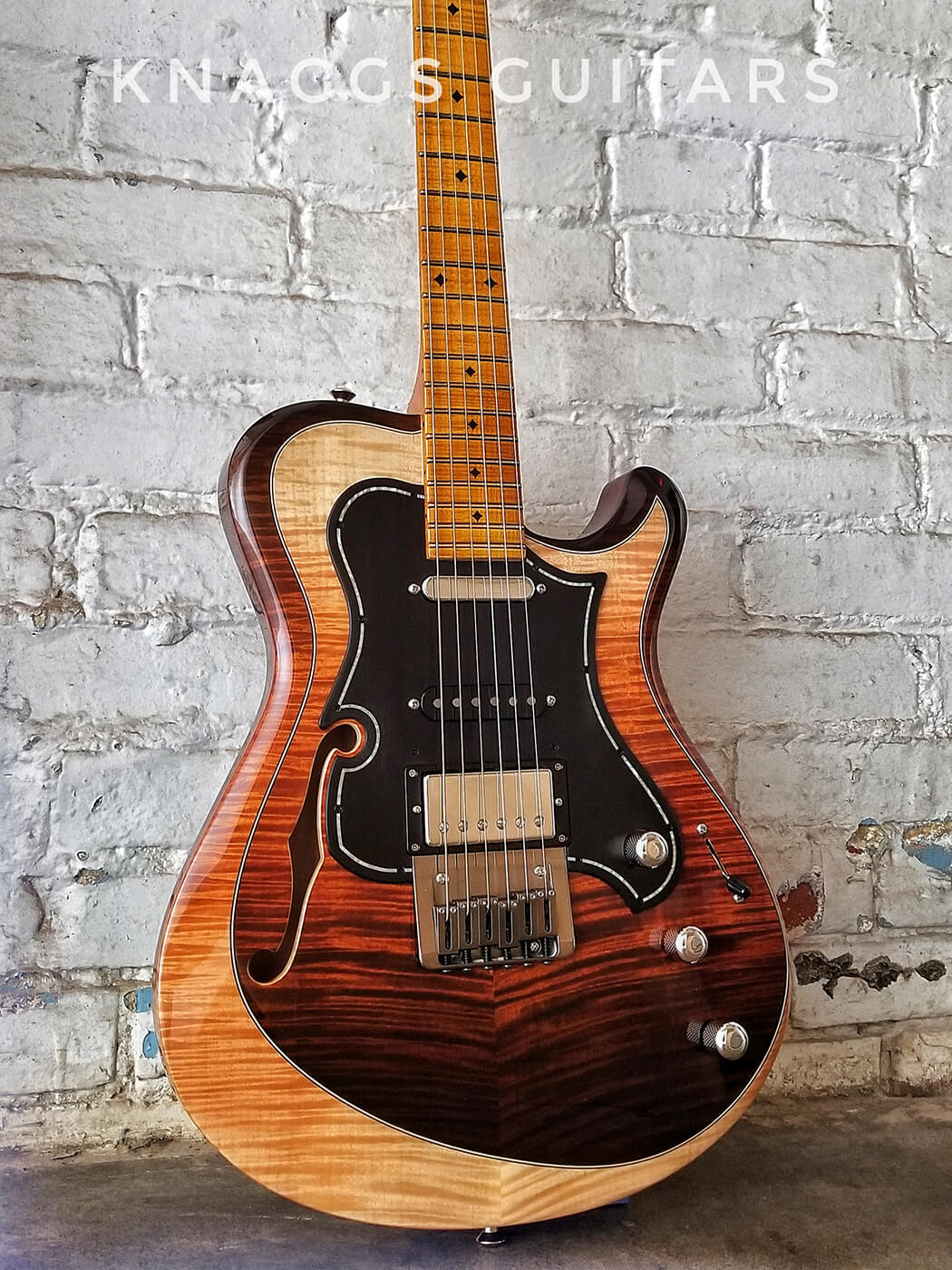 Regarding the eminently recognisable shapes of the guitars themselves, Knaggs tells us, “When I drew the first shape that was a predecessor to the existing Severn and Choptank, I started with the thought of a classic guitar that people recognise and know and went from there. I try to make sure the shapes flow and work with each other. Most really great designs are based around feminine-shaped curves. Somehow, when I draw the shapes for Knaggs they come out looking like a ‘Knaggs’ shape.

“I recently drew the pickguard for our new Kenai J; [Knaggs builder] Lukas Fronzoli took one look at it and said, ‘It looks like a Knaggs pickguard!’ A good shape is a good shape, and anyone, whether they are artistically inclined or not, can see that. Somehow it instantly makes them feel good. We have a lot of people that do not play guitar say, ‘That is really beautiful, I want to buy one just to look at it!’ That is a really nice compliment. But again, I want the instrument to look, feel, play, and most important, sound good.

Even before such skin-deep considerations come into play, though, this is a maker that strives to get the chassis right first and foremost, and to inject optimal resonance and musicality into the wood structure that forms the foundation of any of his instruments.

“Regarding that effort,” Knaggs relates, “I can start by saying I want the guitar to ring and sustain. If the guitar is ringing and sustaining then, then the ability for the energy first created by the plucking of the string is not being hampered in its travel through the instrument. I felt the same way about developing the bridge designs, which are things that I did not see in the market. The designs were geared towards creating more harmonics and sustain in the instrument. I played a ’61 Strat when I played seriously and I wanted to improve on that type of guitar.” 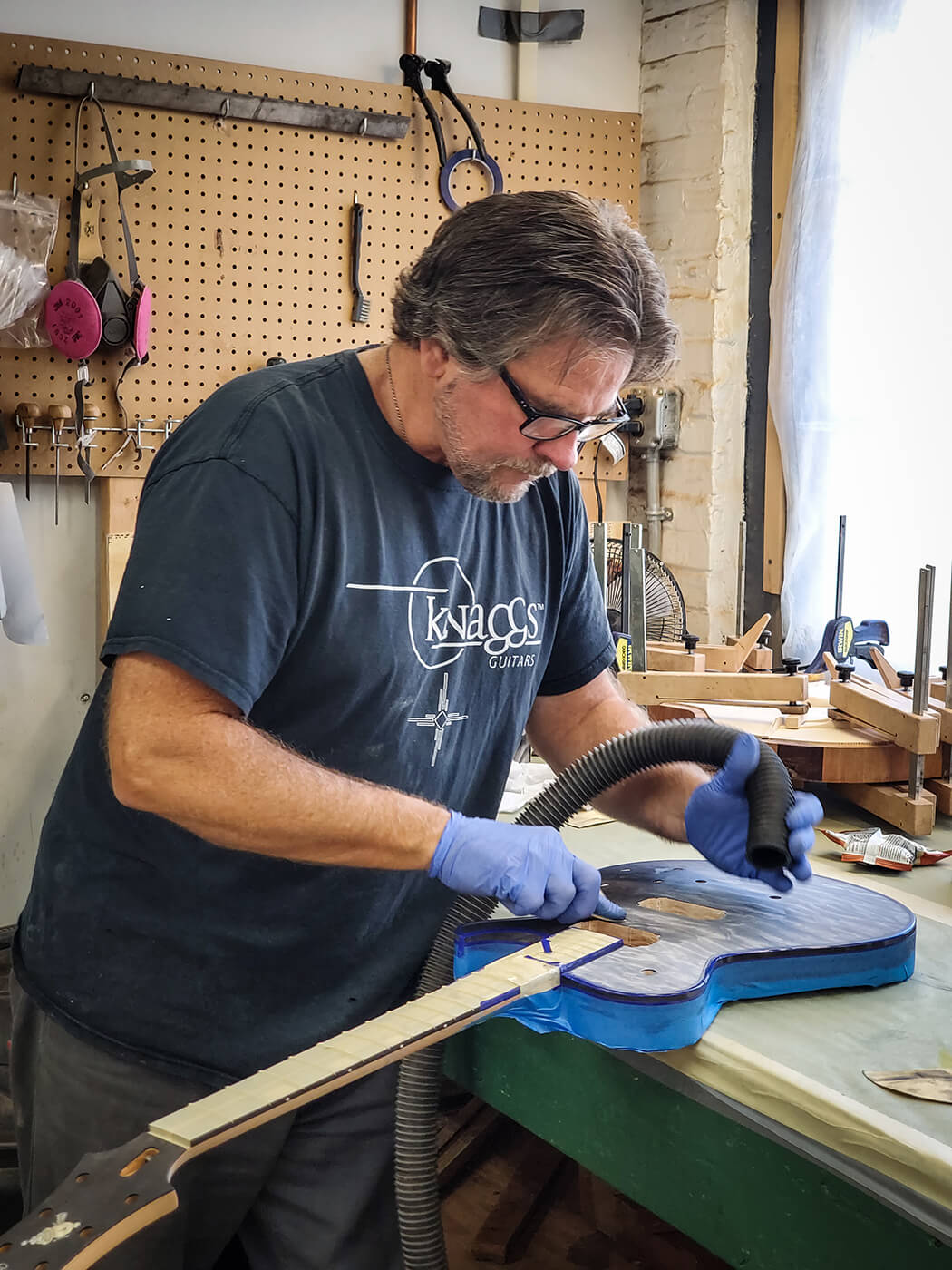 Among the myriad aspects of high-end guitar construction, the plethora of details that translate the craft into an art form, Knaggs says he gives the most attention of all to neck design and construction.

“The biggest thing is how you make your necks,” he declares. “The way we make our necks adds to the sustain and ring of the instrument. You want the truss-rod to have to do as little as possible to get the neck back to straight, which will keep the neck relaxed. The way we make our necks optimises that sustain and ring that I’m talking about, because the neck is as relaxed as possible before the truss-rod is used. The more relaxed the guitar is, rather than being forced into a position, the better it will ring.”

Given PRS’s extensive roster of name artists, Knaggs has long appreciated the benefit of star endorsements. Throughout his 10 years with Knaggs Guitars, close associations with such artists has only helped him improve his product, and keep the mission on course.

“During the time with PRS I worked with Mark Tremonti, John McLaughlin, John Scofield, Carlos Santana – though not directly – and John Fogerty, who was my favourite guy I worked with, to name just a few,” he says. “Currently I talk with Steve Stevens quite a bit, and we work with Eric Steckel, Larry Mitchell, and Tyler Tomlinson, among others. They are all good friends as well. I also deal with local guys that are great players, like Mike McHenry and Jeff Washington. Peter Wolf, my partner in crime, is also constantly talking with these guys and he handles artist relations, all social media, along with other marketing, sales and gobs of other stuff.”

Alongside himself and Wolf, Knaggs Guitars boasts 11 employees, all of whom are valued in the effort.

“Just like at PRS,” Knaggs concludes, “I like accomplishing things as a team. I was a quarterback in [American] football, and to win a game with the team was always the best thing I experienced. Same with making guitars. It’s not that fun to toast by yourself. The guys I work with are really talented, great guys. We laugh every day, and put out the best product we can. That is our goal.”