“Every guitar sound is DI’d: it’s blown my mind!” Joe Satriani on why plugins are the future for him

The shred icon on his new album, why all roads lead back to his SansAmp plugin, and why despite his newfound love of digital amps, he's never going to say goodbye to tubes.

With 15 studio albums spanning a career of almost 40 years, it’s fair to say that we know what to expect from a Joe Satriani album. Memorable melodies and steadfast rock grooves are the order of the day – and that’s exactly how new album The Elephants of Mars begins, with the catchy Sahara. But from there, the record takes an abrupt left turn, with hooky major melodies disappearing in the rear-view mirror.

Elephants is without doubt one of the most interesting Satriani records to date. With the usual two-year release and touring cycle practically eliminated during the US’s multiple lockdowns and global logistics issues, Satriani found himself without a deadline and without a cost-sensitive studio recording session, which gave him the freedom to push himself. The resulting record is dark and jazzy, with elements of fusion and shred.

At a time when many young YouTube guitarists can make a mockery of the standards once considered ‘virtuoso’, the prowess showcased by Satch on this album is enough to remind you that we should still be paying tribute to the Godfather. It’s also heart-warming for older players too, for it’s an acknowledged truism that artists rarely get better with age. But, at 65, Satriani has long pushed the boundaries of what we expect from guitar instrumental music, even at a time when instrumental bands are continuing to reshape its landscape.

If the lack of deadlines and touring cycles are responsible for this, then long may they continue. Here, we speak to Satriani about his new record, his high-school guitar teacher, and the prospect of going all-digital. 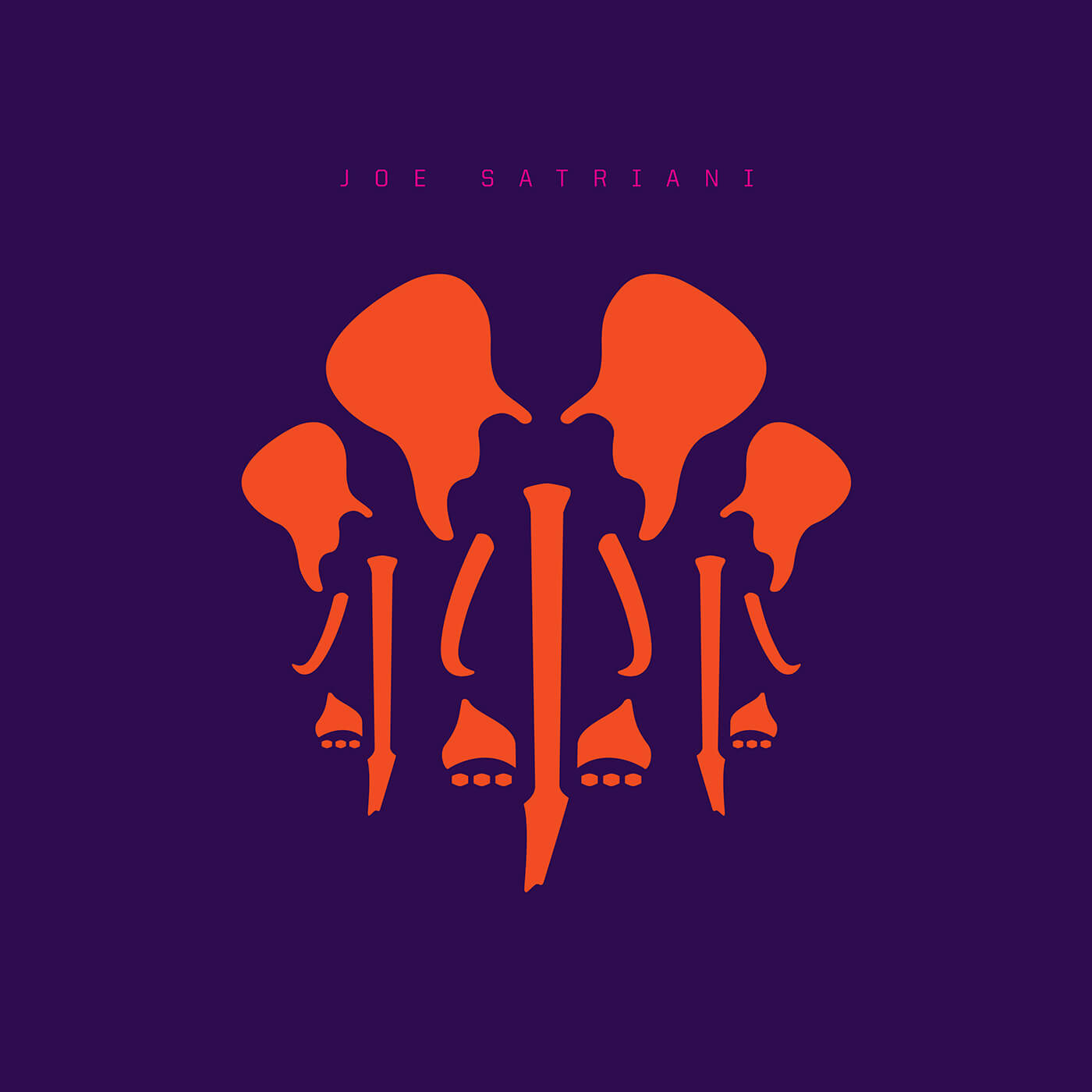 In the run-up to the new album’s release, you mentioned that you challenged yourself to create a “new standard” for instrumental guitar albums.

I certainly was out to create a new standard for myself! When I look back at the previous set of records, the last two I was really thinking about again echoing classic rock, as I did with The Extremist back in ’92. It was really a love letter to an era of music that I grew up on. You know, I remember playing The Extremist album for the record company in LA with Andy Johns at Ocean Way Studios, and there was silence in the room. They didn’t understand it. They didn’t like it, it didn’t sound like Soundgarden or whatever they thought was really popular. I remember Andy saying something really rude in frustration and storming out of the room, and I was like, ‘What’s the matter with you guys? Really? You don’t get it?’

So here I was again after Shapeshifting [2020], which again was a retro kind of a record. I thought, ‘Okay, we’re all stuck at home, no chance of getting in a room together – now’s the time to raise the game; there’s like no reason to limit the scope of each song because we have to get it recorded in an afternoon.’ Then I looked at myself and said, ‘Hey, don’t limit your playing. Bring the absolute truth of the story into the song and to the audience.’ So this was the standard I was alluding to – to make a super-powerful album.

Tension and Release is very sinister-sounding, with perhaps even a King Crimson vibe.

That was written in such a quick moment of inspiration. I pulled out a guitar that I hadn’t played in years – I think Mike Keneally was the last guy to play that seven-string a couple of albums ago – and I plugged it in. The strings were so old that they were wobbly, and I immediately came up with that riff, set up Pro Tools and said, ‘I’m just gonna write this thing about tension and release’.

We noticed a few odd time signatures in there.

I came up with this whole riff and the two main sections, and then I thought to myself, ‘I wanna hear this in 4/4’. So I did it in 4/4 and then I thought, ‘Well, I wanna hear that 4/4 part in 7/4’. And I just didn’t worry about the fact that it wouldn’t be ‘on the radio’ or hit anybody’s playlist or anything. I just thought, ‘Why can’t I just do any arrangement I want, based on what makes me smile?’

Is it true you used a SansAmp plugin exclusively?

It’s really quite funny. I know behind me here are the Marshalls, the EVH and 5150, and I had every intention of using all my vintage amps and new amps and everything on the album. But I recorded DI, and as we went through reamping into real amps and using modelling software and stuff like that, all roads always led back to the SansAmp plugin.

That’s all you used throughout?

Every guitar sound is my guitar, DI with the SansAmp plugin; it’s blown my mind!

It’s an extremely clean tone devoid of the artefacts you sometimes get with mic’ing up. Was that something you noticed?

We all grow up thinking, ‘Proper amp, proper microphone, in a proper room, going to a proper machine of some kind with a proper engineer’. But I have made so many albums and been in so many studios and had that horrible feeling that I need to compromise what I wanna play because it doesn’t sound right. I stand by my amp, it sounds great, then I walk into the control room and I go, ‘Oh that’s right, microphones are not ears!’ Then you spend hours and hours, piles and piles of gear you go through, and it’s never what it really sounds like. So after a while, I was thinking, ‘This is stupid, what am I chasing?’ There’s no rule. If it never sounds the way it is, let’s just start from a new reality, which is: I want the sound of my finger touching the string on the fretboard to be transmitted to the audience.

Due to the restrictions imposed by the pandemic, you recorded this album remotely?

Technology and events will always affect me as an artist and as someone who makes albums. Here’s a perfect example: leaving my apartment one morning back in ’87, I’m supposed to go into the studio to record Surfing With The Alien and I don’t really know what I’m gonna do. I’m kinda prepared but not entirely. I’m heading downstairs and I look back one second and I go, ‘Did I forget anything? Should I bring anything?’ And there’s this wah-wah pedal that I swear I have refused to play for, I don’t know, five years, and I just pick up that old thing and bring it to the studio.

I walk in and John [Cuniberti] looks at me like, ‘You don’t play a wah-wah pedal!’ I said, ‘I know! That’s why we’re plugging it in!’ By the afternoon we had this track and we were like, ‘Wow’. It’s a simple, humorous example of how technology can really affect your artistic output.

Do you still love the album format?

This time around, what I started to notice was that I loved watching players I didn’t know on Instagram play guitar in fabulous ways that I could never ever achieve again. I’ve been through that, I’m too old for that but I love it and I love that they’re doing it – they’re the superstars of pushing the guitar to new limits.

Never before in the history of the world have there been young guitar players that can play that fast, that complicated, that syncopated, that cleanly, that well. It’s totally new, it’s really mind-blowing. But I also say to myself, ‘That’s not me’.

In what way did that focus your mind?

So here I am, I’m being affected by this [the pandemic] and I have all the gear that I should ever want. I really don’t need any more gear, you know; just a guitar and some way to record it. I really need to focus on my composition. I’ve known that since my high-school theory teacher told me one day, ‘It may turn out when you’re 21 that you’re not as good as you think you are – you just might be an average guitar player!’

Was that disheartening to hear?

He’s like, ‘Don’t take this wrong. The musician in your head and in your heart never stops growing. You need to develop those two guys more than fingers, ’cause after a couple of years, you’re there – you’re not gonna get any faster. You might get smarter and, if you keep training your brain and your heart, you’ll pick the right notes, and people will like it more.’

So that set me on the path to always thinking not to get down on myself because I’m not as fast as this new person that just showed up on the scene, but to always think that the key is to write original music that’s true to what you want to say.

He also taught Steve Vai a couple of grades below me, so I think he knew Steve was gonna, like, [motions a rocket taking off] fly ahead of me, so he was giving me a heads-up.

Would you now consider an all-digital live rig?

I don’t think so. Only if there was, like, a Dumble of modelling; a Dumble amp is a thing of mystical beauty. It is so dynamic. It really follows the way a person plays. The problem I have with the digital setup is dynamics. Unfortunately, in order to make modelling amps affordable to anybody, the convertors have to be affordable, so they get dumbed down. And when they do that the dynamic range starts to shrink. The worst offenders of course are the pedals that are really fun but very affordable. They work in the bedroom when you’re playing against a mix that’s already compressed but when you’ve got a drummer that can go from 0 to 130dB, how do you set your volume?

So tube amps are here to stay?

I need something strong and dynamic. The last set of tours I did were the Experience Hendrix tours in 2019 with Dug Pinnick and Kenny Aronoff. It was so great to plug into my Marshall JVM and turn it up loud. I love loud tube amps, the dynamics are just so wonderful. Then I hear somebody else on that tour playing with some digital stuff. When you’re near it, it sounds very attractive because you can program every sound you want, but once you walk out into the room, for some reason it’s not there.”

Do you concern yourself with gear at all?

A lot of gear is for the player, you know? Take someone like Joe Bonamassa; he’s got every great guitar ever and he’s a phenomenal musician. So what really matters is that when we go to see Joe play, we want him to be happy, because if he’s happy he’ll play his best for us. Same thing when you go see Steve Vai and he’s playing the same guitar; we want him to be happy because then he gives us the best version of Steve.

Once you get to the point where you have a lot of instruments and amps, you realise it’s about making yourself happy enough to deliver performances every night, because the name, the label or the vintage quality of it, it really doesn’t translate into the hearts and ears of the audience. It’s really just a little mind game you’re playing with yourself.

Satch’s The Elephant Of Mars is out now.