The secret life of José González

The Argentine-Swedish singer-songwriter on his guitar heroes, soundtracks, working with orchestras, DJ’ing and studying biochemistry. 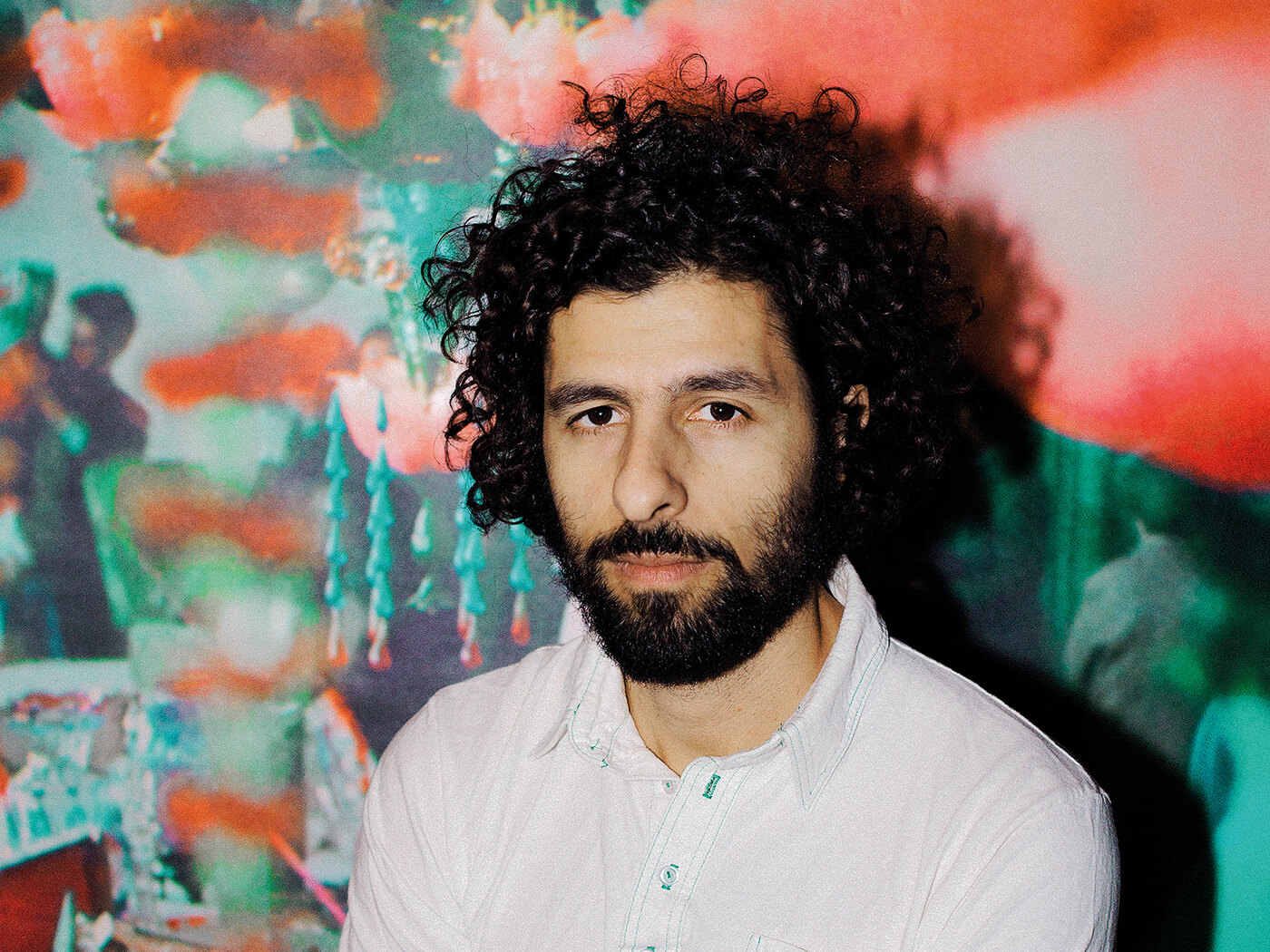 José González slinks into our interview with furtive steps and stolen glances. He greets us in hushed tones, carefully choosing his words, as though aware that he shouldn’t betray the autumnal indie-folk persona he’s grown to inhabit over the course of his career. Three solo studio albums, each a study in late-night introspection, have earned him that reputation. But this isn’t a performance. Secrecy is, in person and song, his medium.

The singer-songwriter, born to Argentine immigrant parents in Sweden, is an enigma waiting to be solved. He isn’t a technical virtuoso in the traditional sense, but his nylon-string fingerwork is unassumingly deft and agile. He’s often pigeonholed with Bon Iver and Iron & Wine, yet the depth of his influences extends far beyond rock, indie and Americana. He had embarked on a PhD in biochemistry, yet his music is more at home in a library than a laboratory. The 2013 film The Secret Life Of Walter Mitty, which his tunes soundtrack, is an apt analogy for González’s sound: bittersweet, life-affirming and painfully romantic all at once.

“When I listen to music while running or even DJ’ing, I enjoy music from Africa and Nigeria,” the 40-year-old reveals. “I like everything that’s dancehall or dancehall-ish. That’s always an inspiration. But I think I incorporate [those styles] without thinking about it, when I’m trying to find new rhythms, new arpeggios. So I have, I guess, parallel lives.”

González grew up in a suburb of Gothenburg, an area he describes as a “music city by the ocean”. Growing up, his tastes were informed by his father, whose love of Tropicália and bossa nova – in particular Mercedes Sosa, João Gilberto, Silvio Rodríguez and Caetano Veloso – formed the bedrock of his guitar style.

“My father used to sing in an Argentinian folk band. So basically, harmonies and bomba drums, two or three guitars. That sound is something that I think I assimilated. My father and his band would sing The Beatles and bossa nova. I grew up with João Gilberto and was always inspired by that simplicity and that style of singing, which was always calm. Similar to Chet Baker, singers who don’t really shout – very soft and close to the mic,” he recalls.

But it didn’t begin that way. In the 90s, González played in hardcore bands before forming the indie-rock trio Junip with two childhood friends. Only in the University Of Gothenburg, with the pressure of pursuing a life in academia, did he come full circle to the sounds of Latin America.

“With each year, I had less and less interest with my hardcore band and I started studying at university and I felt that I didn’t have enough time to spend on this hobby,” he says. “We did the recordings, but not that much happened. But with my solo music, it was different. I kept on recording once in a while, usually on cassettes and also on a 7” that I put out on my friend’s label. That 7” got picked up by a label in Stockholm and that was when I switched from biochemistry to music full-time.”

2003 was the year he endeared himself to the Pitchfork crowd. He released Veneer, an album cherished as much for its quietude as its spine-tingling cover of Heartbeats, an electro-pop song by out-there Swedish band The Knife. He was the soft-spoken answer to the eccentric Devendra Banhart: an acoustic guitarist dressed in corduroy and brown instead of Banhart’s glitter and gold.

“It was fun to make a cover while [The Knife’s] version was still on the radio, on TV,” González explains of his decision to take on songs from bands that sound wildly different from his own. Trip-hop group Massive Attack’s Teardrop is another electronic track he has reworked.

“I was inspired by how in Jamaica, if you have a hit, then everybody does it and you have five versions going on at the same time. So in that spirit, I felt it was fun to cover their version. Since it was different, I was also inspired by Johnny Cash and his albums, just taking different popular songs and making them your own.”

On the silver screen

Veneer found a second wind a few years after its release, when songs from the album were used in teen soaps – Crosses featured on The OC and Heartbeats on One Tree Hill. González followed up with the intimate albums In Our Nature and Vestiges & Claws, but a years-long touring partnership with The String Theory brought out a more cinematic approach.

“The String Theory is an orchestra/collective based in Berlin and also in Gothenburg,” he explains. “They invited me as one of many artists to do one song each with them in Gothenburg in 2008, I think. And I liked it so much that I invited them to do a full show a couple of years later. Then, we started touring together as a 22-piece orchestra around Europe and the States. It’s a very eclectic but very talented collective. So they did arrangements for all my songs; some are very classic and harmonic, some are more experimental.”

Fast-forward to 2013, and González made his silver-screen soundtrack debut with a collection of grander tunes for The Secret Life Of Walter Mitty.

“It was the first time I worked on a film that big. I’d done a TV series in Sweden, but when I started working on the film, it felt like a big thing for me,” he says. “So I was like, I can’t say no to this and said yes, even though I felt like I didn’t have the time. It was very nice to collaborate with Ben Stiller and [film composer] Teddy Shapiro, who’s done so many films and comedies.”

The experience taught González “how to set moods with chord progressions and also how to get comfortable in studios where you produce a lot”. “I learnt a lot and I also used it a bit when I was working with The String Theory, when you have to listen to the whole orchestra and see how to take a more producer role.”

In February this year, the collaboration with The String Theory spawned Live In Europe, a two-LP live compilation that, González reveals, was a cost-effective way to document his work with the orchestra. “The easiest way was to record our live shows, because it’s such a big production, we didn’t feel like we had the time and money to go into the studio. And so we just recorded each show on that tour in Europe and picked out [our] favourite songs.”

When our conversation shifts to gear, the previously reserved González becomes much more animated. A lynchpin of his stage sound are warm, round, almost vocal-like Spanish guitars: he favours Esteve, Alhambra and Córdoba instruments and the Fishman Prefix Pro Blend pickup system.

“I’ve used these pickups for 15 years now,” he explains. “And we just found a way to make it sound loud and still natural, compared to many other piezo mic and blenders. The guitar is important, but more important is the pickup and the sound engineers. I always have two sound engineers that I work with.”

Besides those, González’s tone is influenced by something far more prosaic: duct tape. The soundholes on his guitars are almost completely taped over, which he says is a way to reduce feedback. “It’s pretty simple: you want to avoid feedback,” he explains. “You can buy round things to cover the hole, but then to me, it sounds a bit too nasally, so we started out trying half a hole, but two-thirds seems to be the sweet spot. It changes the sound a bit for the worse, but it’s definitely helpful for big stages, especially festivals.

“Getting a loud, natural and clear sound is always hard. But the hardest part, one step before that, is to explain to the PA guys that you need more speakers when you just have a nylon-string guitar. They usually think that it’s only guitar and vocals, so you’ll be fine with these two speakers. But since it’s so sensitive, you need to bring up the volume a lot, and with that, you get more feedback.”

González is now on a roll, much more comfortable spilling his onstage secrets than letting on about his music. Another trick up his sleeve? Nail strengthener. “I’ve become very aware of my nails,” he says. “I use nail strengthener, and there’s also a protein gel that you can apply that’s really helpful. I even bought an acrylic kit for a couple of tours and did my own acrylic nails.”

Even the techniques he uses aren’t off-limits for discussion. You’d imagine the troubadour to rely predominantly on melancholic chords – not quite. “Major-ish,” he laughs when prodded about whether he prefers minor or major chords. “It’s been something I’ve thought about a lot, that I didn’t want to make minor-chord songs. So I chose not to add the third too often, but when I do, it’s in that middle ground. Many people resonate with the music because it’s moody, but if they analyse it, it’s not so often that I use a minor.”

The music of his heroes Caetano Veloso, Silvio Rodríguez and Gilberto Gil springs to mind when thinking of “major-ish” chords underlined by sorrow. But González is quick to dismiss suggestions that his heritage had anything to do with it. “With South America – I think about it a lot in terms of culture and nationality, where humanity is headed,” he explains. “I feel nationality has its nice things, but people are taking it way too seriously. The flags, the languages of each culture. They forget about how connected we are.”

Live In Europe by José González And The String Theory is out now on Pledge Music.