“I thought I could turn away, but all I could see was the world in flames”: Josh Ritter on Fever Breaks

The critically acclaimed artist on his penchant for music with a message, dedicating your life to art and working with Jason Isbell.

For many musicians and artists, creating work can be an arduous process; only finding solace in the finished work. Josh Ritter, however, is an artist who finds consistent joy in the pursuit of creation as much as the result itself. Strangely, he likens it to hiking. “I think making records is like climbing mountains, in a way. I don’t like climbing mountains, but I enjoy the whole strenuous process of planning and thinking and getting the songs together. It’s a wonderful process.”

The Americana artist’s latest long player, Fever Breaks, is released 19 years on from his debut album and for it, he got Grammy Award-winning songwriter Jason Isbell on board as his producer.

Working with Isbell is something that Ritter hadn’t initially planned, but on his previous outing, Gathering, he collaborated with Bob Weir – of Grateful Dead fame – who indirectly influenced the way he approached his new record. “Learning to work with Bob was a chance to really learn to collaborate. Bob really taught me that a song is just a model of the way something can go. It’s an outline. Bob taught me things can go in any direction and to remain open-minded right to the end.”

His newfound approach to collaboration was something he’d unconsciously avoided on previous LPs, due in part to his dedication to working as a solo artist. “Maybe I’d thought about it, but it wasn’t something I consciously practiced. I was used to going into the studio with my songs exactly how I wanted them. Never questioning that they could go other places… and that’s what Jason [Isbell] taught me, too.

“While working with Jason, I very consciously put myself in that situation. I was working with a peer, someone who was behind the same place of the microphone as me and it was exciting to work with a friend, too. I’ve always worked with the same people, so working with Jason and his band was a new experience and one that I was nervous about, but it was really powerful.”

The band in question is The 400 Unit, Jason Isbell’s backing band for over a decade, who also picked up two Grammy wins for Best Americana Album and American Roots Song back in 2017. No pressure, then.

What Isbell and his band bring to the album is a renewed sense of camaraderie and a more robust musical offering; although this wasn’t Ritter’s intention from the word go. “I was just interested in treating the songs the best way we could. Initially, I had the idea, long before the studio, of making a record that was solo and acoustic,” he admits.

“Once I got behind the wheel with Jason and The 400 Unit, I realised I could go all kinds of different places that I hadn’t really been thinking about. On a song called Old Black Magic, which I wrote as a very quiet song, almost intense, I wanted the feeling of a terrible mood, then Jason said: “No one sets out to write a rock song, but sometimes it just ends up that way!”

To add fuel to the fire, Ritter also recorded Fever Breaks at the infamous RCA Studio A in Nashville. Despite the grandeur of the occasion, he seems enthused rather than daunted by the new challenges he’s bestowed upon himself for this album.

“Each studio is so different and studios are so much fun, no matter if it’s just someone’s bedroom or Studio A. With a place like RCA, you’re working in a place that’s hallowed ground, y’know? I mean Dolly Parton recorded Jolene there!” For Josh Ritter, simply the act of recording is a joyous and communal experience, revealing that it’s like “being inside a church that I like to go into. It’s a religion that all musicians can get behind”.

Music With A Message

Ritter’s career has spanned over two decades, yet he’s managed to avoid writing songs with a specific agenda for the most part. Fever Breaks, however, represents a slight departure from that. His poetic lyricism, is omnipresent throughout, but also reveals a need to address the unnerving events that are unfolding in his native USA. Songs such as The Torch Committee are nuanced and farsighted, yet still leave the song’s protagonist in front of a panel of judges to “pledge that you have always been a patriot and citizen”. The title also alludes to the rise in white nationalism that is rampant in the US.

Ritter reveals the process of writing songs that are reflective of the era wasn’t so much an option as an obligation. “I would like to say that it wasn’t really a choice. The songs were coming in a way that was darker and a little more fierce than I’ve written in the past,” he sighs.

“My question at the time was, ‘Is this the art that I want to inflect?’ I thought I could turn my face away and write love songs, but all I could see was the world in flames. To not write about it, not describe it, not talk about it didn’t just feel like a waste, it felt like I’d have been giving up the responsibility.”

He’s continuously charming throughout our conversation, remaining humble and grateful towards any passing compliments on the album’s composition or structure. His appeal stems from allowing his music to be forgotten if needs be, but despite his ability to detach himself from the pressures of releasing music in the modern industry he remains at the forefront of the zeitgeist, with no signs of letting up.

He chuckles: “I would like to think that’s because I’m trying really hard to continue to do stuff that feels relevant. But really, in the end songs kind of get filtered through a sieve and we don’t remember very many. I’m so comfortable with my songs being forgotten and rediscovered and found by people who want them and need them. I heard my favourite records years and years after they were put out. That’s the beauty of music, it just lasts.”

Ritter’s ability to advance his career after more than 20 years in the game is commendable, to say the least. He regularly draws influence from prestigious artists outside of his genre, noting Jay-Z’s 4:44 as a former inspiration. Now, the people who maintain their dedication to the arts, regardless of their ability, background or time restrictions form his biggest source of inspiration.

“Now, in my life, the most important thing for me are the people who are brave. The people who manage to live a good normal life with family, friends and responsibilities while still creating art. I feel less influenced these days by my heroes’ art and more by the fact that they continued to create throughout their lives.

“As time goes by, it starts to sift out why people are doing what they’re doing and there are people who are doing it compulsively and because there’s no choice. It’s those people I really relate to and for those people, it’s not a matter of whether they’re going to do it, it’s more about how they’re going to create a life in which they’re happy while still making art. If music is like medicine, then you’re just trying to figure out how to synthesise your own.”

When quizzed on his guitars of choice for Fever Breaks, there’s a slight pause. As opposed to many roots musicians, Josh Ritter is far more influenced by the craft than the object used to create it. “I know very little about guitars and gear, I own a total of just five guitars,” he reveals with a smirk. “When I was working with Jason Isbell And The 400 Unit, I was made all too aware of it! I felt very lucky to put my songs in the hands of other people and Jason as the producer did a really incredible job of choosing the instruments that fit the song best.”

What Jason Isbell did bring to the process was an army of instruments that allowed Ritter to simply blow any misconceptions about his guitar playing out of the water. “I don’t know the year, but I used a beautiful old Martin of Jason’s. Studio A has a plethora of amazing guitars, but I was very lucky to use Jason’s. For most of the acoustic stuff I used that Martin, but I also used a beautiful 12-string for a few songs, a J-45 and some Gretsch hollowbodies.”

Ritter believes that the process of recording should be a step out of time, leaving any tribulations outside of the room and focusing solely on the task at hand, which includes the instruments at his disposal. As we begin to wax lyrical about the beauty of old Martin guitars, he quickly remembers his beloved acoustic that is strictly for home-use only. “I have a guitar at home which I write on, a 1963 Martin, that I would never dream of taking out on the road.

“It has a specific place for me in my writing and my road guitars are the same. It’s a relationship thing in a way, the last thing I want to do when I get off the road is open guitar cases and look at them!” Finally, he says with a grin, “I just want to sit in the corner with my gentle acoustic and cry.” 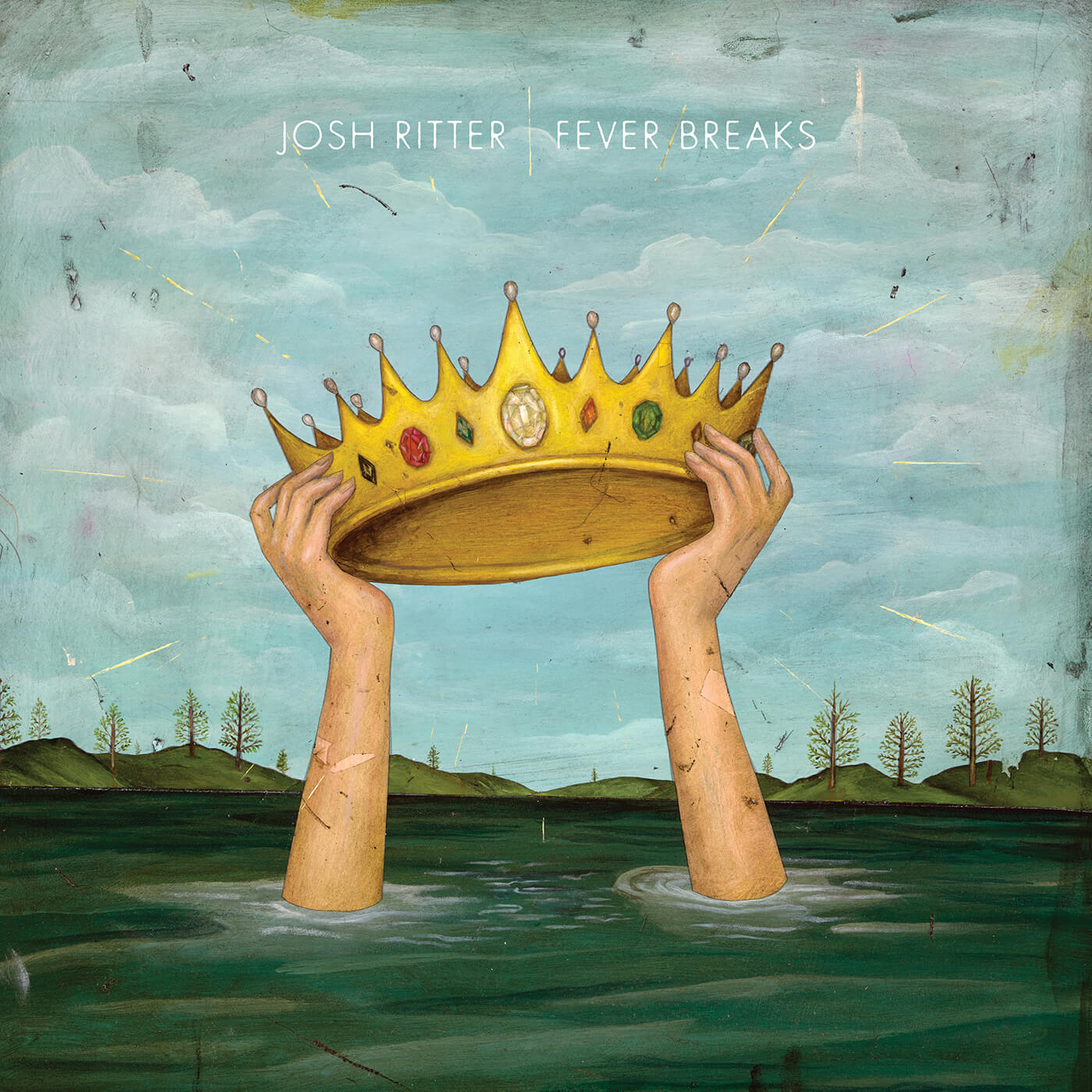 Josh Ritter is on tour throughout the US until October. His new album, Fever Breaks, is out now.