Kevin Morby rediscovers the joy of four-tracks on Sundowner

The prolific Kansas singer-songwriter’s latest LP sees him taking sole charge of guitar duties for the first time. It could be about to usher in a fruitful new chapter. 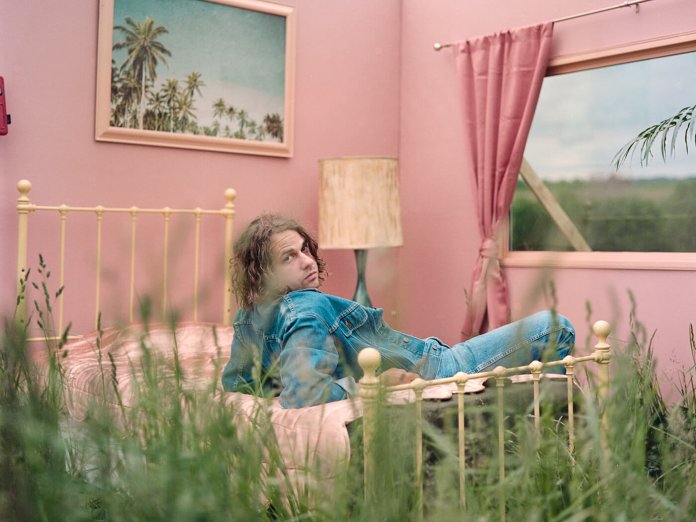 “Sundowner feels like I’ve created a language with my guitar and how I play, and it’s a big display of that language,” Kevin Morby tells us while on a short vacation in Memphis. In this instance, the Kansas singer-songwriter is reflecting on the evolution in his guitar playing across six solo albums that capture the very essence of classic American songwriting.

While the through line from totemic lyricists such as Bob Dylan, Lou Reed and Leonard Cohen to Morby has been increasingly evident with each of those records, his guitar playing has frequently flown under the radar. Perhaps it’s Morby’s humble modesty or a lack of confidence in his own abilities that has often seen other players, such as Meg Duffy, or producer Sam Cohen, take the lead on his albums. Regardless, his new record, Sundowner, is the sound of Kevin Morby taking control of six-string duties.

“It manifested that way because I was writing on a four-track,” Morby explains. “I wanted this record to be limited and to be mainly me. The last time I played a lot of guitar solos on a record was City Music [2017]. On Oh My God, it’s either Sam Cohen or Meg, on Singing Saw it’s probably Sam Cohen and my previous albums it was the producer Rob Barbato, but this one took shape naturally with me doing everything.”

His last album, April 2019’s Oh My God, was a complex, multi-layered, at times even bombastic, record. Morby was wholly comfortable applying the term ‘concept album’ to a collection of hymnal songs written in the clouds as he flew around the globe touring; it was a captivating examination of religion and its role in a modern world losing its way.

Sundowner, demoed on a Tascam 424 four-track bought while he was trying to finish Oh My God, is sonically that record’s polar opposite, a sparse lockdown album recorded before lockdown began. Morby took refuge in a makeshift shed studio at his Kansas home, armed only with the four-track, a 2016 Gibson acoustic and a green Mustang gifted to him by the good folk at Fender. In the summer, he would work long days timetabled by the lambent veil of the vast plains sunsets. By winter, icicles hung from the shed roof and his fingers seized up on the strings.

Throughout the quiet, understated vignettes on Sundowner, Morby sounds newly contented. Before recording the album, he moved back to his home state and settled with his partner Alabama songwriter Katie Crutchfield, aka Waxahatchee, in the house they’ve named The Little Los Angeles. It’s a characterful home, full of vintage curios and unusual instruments such as a World War II era pump organ that appears on the record. The couple’s guitars hang from the walls, alongside Morby’s artwork and paintings of Leonard Cohen. 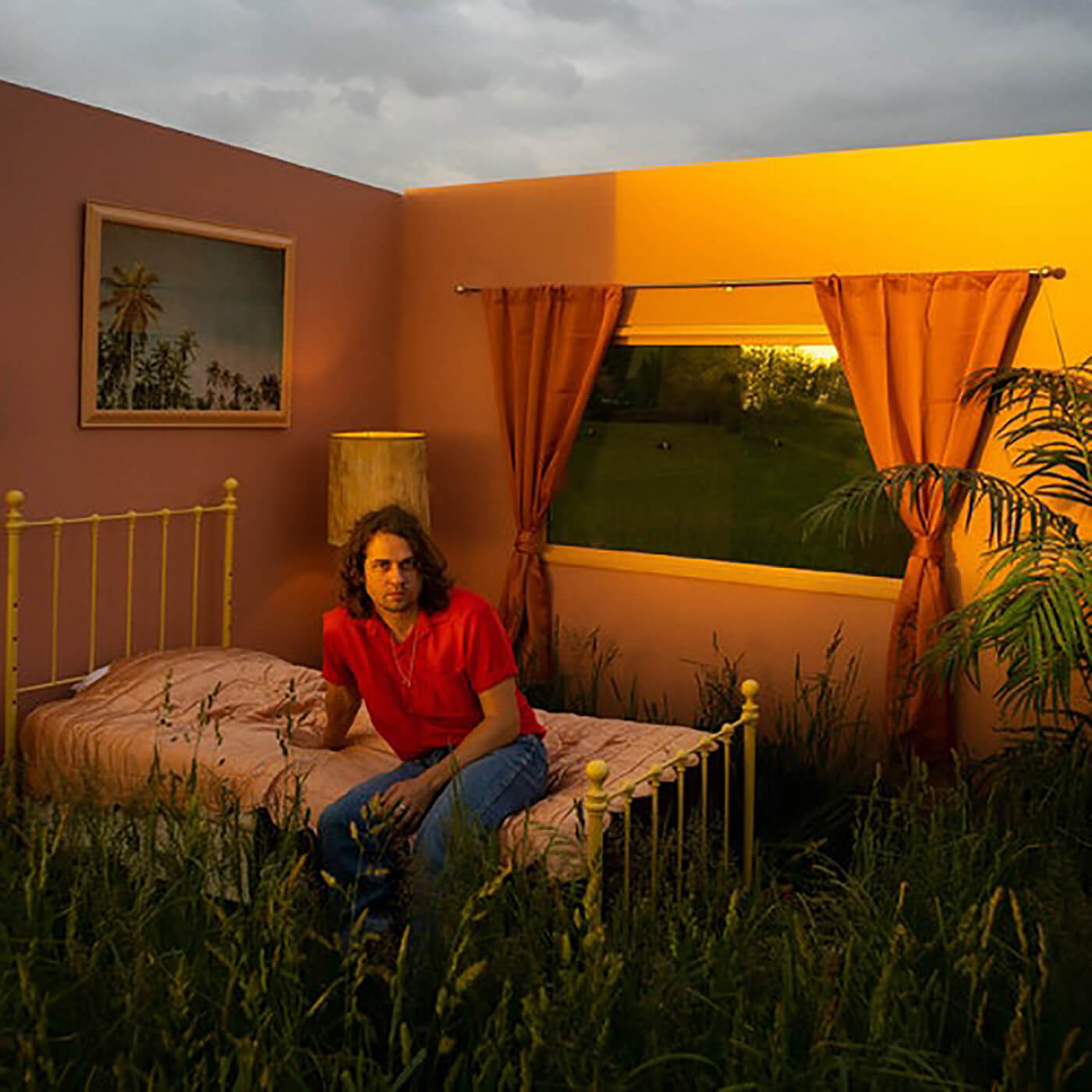 Morby grew up in the suburbs of Kansas City, where he picked up his first guitar (a Yamaha electric) at the age of 10 from the Sears Catalogue, and up to this point he’d always been something of a nomad, imbuing each of his albums with a defined sense of place. He moved at 18 to New York City, where he played bass in folk experimentalists Woods before starting his own band The Babies, then going solo with 2013’s Harlem River album. Later, he found inspiration in the quietude of a “three-storey hobbit hole castle” on the side of Mount Washington, overlooking Los Angeles. He knew, though, that “I would write a Midwestern record at some point”.

That record has arrived with Sundowner, inherently the pacific sound of the big skies and endless vanishing-point roads of middle America. The limitations of the Tascam, a classic piece of gear most guitarists of a certain age will have fond memories of, leant an analogue glow to the recordings, affirming the old adage that studio tools can become instruments in their own right.

“It’s just so warm,” says Morby with visible fondness. “A lot of times when you’re demoing, especially if you’re doing it digitally, you have to do these tricks to get it to sound how you want it to. It’s this extra labour that takes away the magic of the demo, but with the four-track you go into it and come out with this vibe. You sound almost like a different version of yourself. It created this warm, intimate world that I was immediately drawn to and wanted to keep working with, its own little universe.”

Demos complete, Morby relocated to Sonic Ranch studio in Tornillo, Texas, an otherworldly space hidden among the pecan trees that zigzag along the Mexican border, but the sparing beauty of those homespun sketches remains. In Texas, he and producer Brad Cook had a singular sonic blueprint to work towards: maintain the sound of the Tascam, “but make it 3D”. Other than some percussion supplied by Big Thief drummer James Krivchenia, Morby and Cook played everything on the record.

In addition to the Gibson acoustic and Mustang, Morby turned to his beloved 1967 Fender Coronado, and an “ugly but cool” 1980s Les Paul he found in the studio, plugging into a resident 1960 Tweed Fender Vibrolux. He also used a boutique instrument bought from Old Style Guitars in Los Angeles.

“They put together these Frankenstein acoustics, where they take an old Spanish guitar and put electric flatwound strings on it, two inputs and this little rubber bar at the bridge to make it sound super-dead,” he says. “A lot of people are getting them now, but at the time they were super rare and have this unique sound, so we were using that a lot in the studio.”

Morby’s pedalboard was kept appropriately minimal, too. “Max from the band Whitney turned me on to the SolidGoldFX Stutter, that’s all the tremolo sounds on the album.

“I always keep my pedalboard minimal, it’s never anything crazy. It’s usually two types of boost: the Supro 1303 and an [Electro-Harmonix] LPB-1. If I just want things a bit louder I’ll use the Supro, if I want to make things dirty I’ll use the LPB-1. There’s the Stutter, an Electro-Harmonix Nano looper if I want some loops and then I have my [Boss] Space Echo pedal, which I use every once in a while.”

In line with this austere pedalboard approach, Morby describes himself as a guitar minimalist rather than a collector. He reckons that, discounting Crutchfield’s flock, he has “two nylon-strings, two steel-string acoustics and five or six electric guitars, enough to choose my own adventure”.

One guitar that doesn’t feature on Sundowner, though, is Dorothy, his previously favoured red Fender Jaguar, with all of the Kansas, Wizard Of Oz connotations that instrument conjures.

“Dorothy is retired at the moment,” he reports. “She’s legendary. I’ve got my ’67 Fender Coronado that I love a lot, and with the stuff I’ve been doing since Singing Saw it makes a lot more sense. I play with flatwounds on it, there’s something about that I really like. It feels good, it’s nicely worn in and the neck feels really good, so that’s been my steady horse for the past couple of years, but Dorothy is hanging tight, on the wall prominently displayed in my house.”

While it’s a record about coming home to the Midwest, Sundowner is also a set of songs streaked with the biting sorrow of bereavement. In the space of a year, Morby found himself rocked by the deaths of his friends Jessi Zazu, singer with Nashville band Those Darlins, prolific singer-songwriter and producer Richard Swift and chef and author Anthony Bourdain. It all happened while he was mourning the 10th anniversary of the passing of his best mate Jamie Ewing of punk band Bent Outta Shape. All four figures were, he says, “woven into the fabric of the new songs as their names fell out of my mouth and into the Tascam.”

Their images flicker momentarily into view on the song Campfire, while Morby’s notion of a sundowner represents both the elemental beauty of Midwestern dusk and the pain of seeing things end before their time. On the heart-wrenching Jamie, he wishes forlornly “that my friend, 25 when he died”, “was still alive”.

It must be a hard subject for Morby to discuss, and it was only upon returning from touring to complete Oh My God that he had time to process his grief.

“I think it has to do with being back home and off the road and being very reflective,” he says. “Out on the road, you don’t have time to think about stuff like that and mourn too much, just because you’re constantly distracted and have to be always on and performing. But when you get home, especially to somewhere like Kansas where there are no distractions or temptations, you can look out at the world and this bigger, bombastic life of being a performer and it opens up this landscape to really reflect on everything.”

It feels, too, that Sundowner represents the end of something, the closing chapter in a two-parter and the passing of the first act of Morby’s solo career.

“Sundowner was definitely a reaction record that I wrote at the same time as Oh My God,” he confirms. “That album was largely written in this scope of my life of touring a lot and being on aeroplanes, in hotel rooms and on stages, and then I’d come home and work on Sundowner, which was an album speaking to and taking place in this isolated, Midwest environment, the complete opposite of Oh My God.”

It’s easy to forget, because he’s so prolific, that Morby’s six albums have come in just eight years. Naturally, he’s already working on ideas for the seventh, and says it’ll be “probably not too long” before we hear new music, but for now Morby is satisfied with the completion of the first volume of what, if we were betting people, we’d wager will become a lengthy body of work.

Having taking ownership of the playing on his sixth album, that next phase could well witness a more confident guitarist stretching out and exploring new areas of expression. It should do, because he’s a fine player with a singular, idiosyncratic style.

“I do think I’m now entering a new territory,” he says. “Obviously I’m taking everything I’ve done before forward with me in some shape or form, but I feel like I’m heading into a new place. I feel like all my album titles sound like movie titles, there’s something very conceptual and stark about each one of them, and I think I’m heading into new territory with this album.

“I think my guitar playing is very lyrical, and I’m the same with singing. I can’t sing other people’s songs, but other people can’t really sing mine either, if that makes sense. My guitar playing feels the same. I’m unique to myself, I’m not the kind of player who can play any kind of song, but I’ve created this own little thing that’s special to me, and I’m glad to at least have that.”

Sundowner is out now on Dead Oceans.