Kirk Fletcher is never getting rid of the blues: “The blues to me, it’s so natural – it’s like talking, it’s like air”

Kirk Fletcher’s latest album is a homage to the blues legends that shaped his career. Mark Alexander talks to him about playing clean, his love of Stratocasters and sticking with the blues.

There’s a simple truth about Kirk Fletcher’s music; an honesty that is unashamedly rhythm and blues. In his latest project, he delves into the source of his love of 12 bars and explores the freedom held within the confines of the structure.

“I like restrictions. It’s like you’re stripping things away,” he says. “The world is such a complicated place right now and I’ve always tried to strip all that stuff away to get to the heart of whatever it is I’m doing, be it guitar, singing or whatever. I really like rules; and then I can really express myself because I’ve spent most of my life studying blues. I never feel restricted because there’s a whole world of blues out there. Blues is such a broad thing.”

Taking his cues from the likes of Robbin Ford and Robert Cray, Fletcher is a cultured bluesman well versed in evocative chord voicings and chromatic turnarounds with a gospel lick never too far away. As a former guitarist with the Fabulous Thunderbirds, his leads can hold an audience through to a crescendo and beyond, and it should come as no surprise to learn he’s been nominated for a host of international blues awards.

With the release of his sixth album, My Blues Pathway, he has brought together an amalgam of soulful originals and fervent covers designed to mark his career in blues so far while tipping his hat to those who came before him. The self-penned tracks take on a cathartic semi-autobiographical role while tributes to Sonny Williamson, Chris Cain, AC Reed and Juke ‘Boy’ Bonner are delivered with authenticity and vigour.

“I wanted to talk about things that are current,” says Fletcher from his European base in Switzerland. “I really wanted to write something current within the framework of the blues and just twist it around a little bit. I wanted to stick heavily with the blues form and just add in a bridge or something. That was my goal; to come back to the blues framework.” 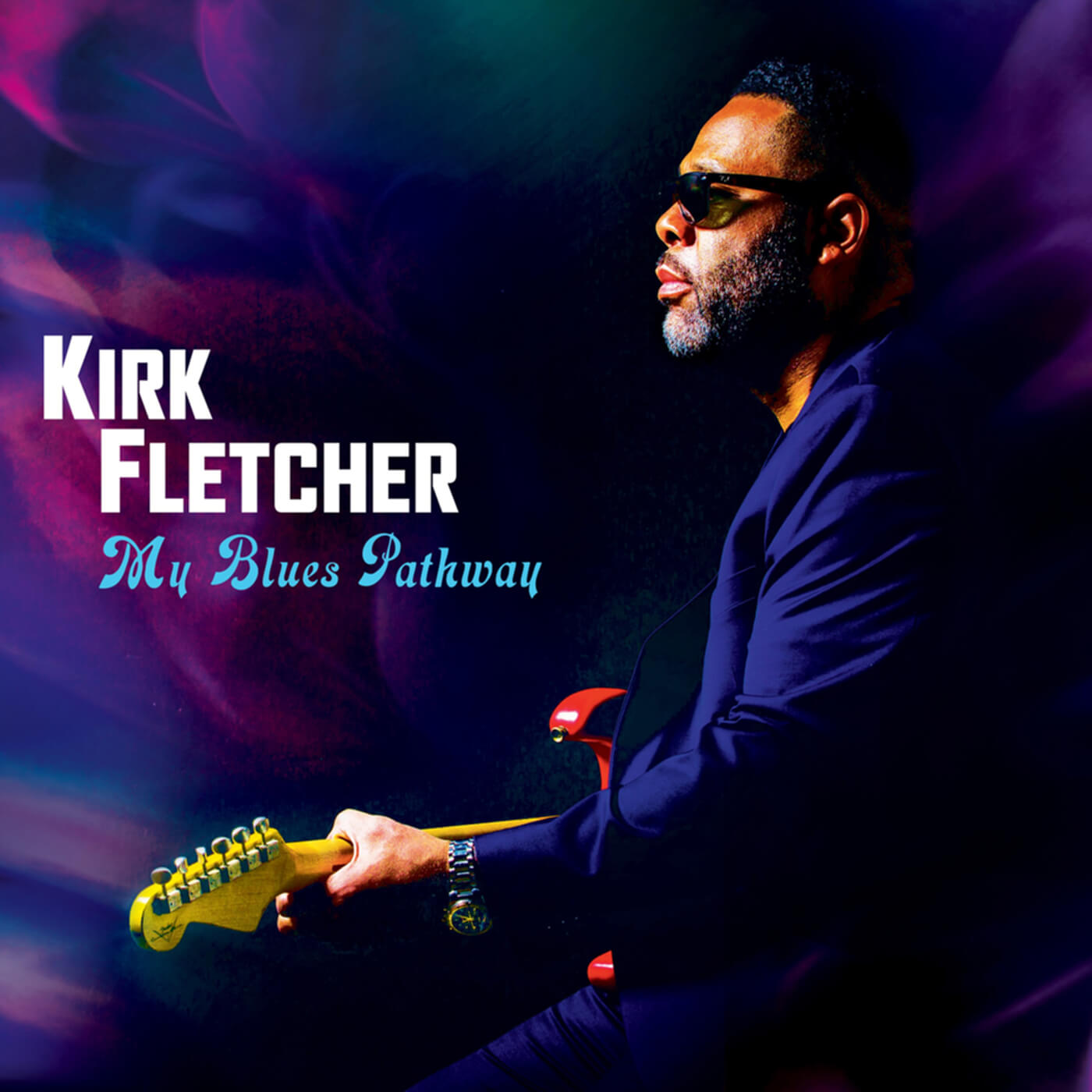 On the right path

“We took six days to record the basic tracks in a studio in Los Angeles with a bunch of my friends. We got together and played the blues and had a good time. The bulk of the record was done with the drummer [David Kida] who I have known for over 20 years. He knew me when I first started out in the clubs. He’s just a good buddy of mine. We’ve really been in the trenches together and I think that came through on the record. The whole band has played together a lot.”

Alongside Kida is bassist Travis Carlton, Jeff Babko on keyboard, Joe Sublett on saxophone and Mark Pender on trumpet. Charlie Musselwhite leant a hand on harmonica and Josh Smithon played a national resophonic guitar on the track Life Gave Me A Dirty Deal. Robert Cray’s long-time bass player, Richard Cousins, also co-writes two tracks. But at the heart of the album is Fletcher’s distinct and insightful leads that cut through the mix with precision and clarity.

Like his songwriting, Fletcher’s setup for the album was unashamedly direct. “All the basic tracks and rhythm guitar was a Stratocaster into my Fender blackface Deluxe Reverb that I’ve had for a bunch of years. Every track is either a newer American Professional Strat, a partscaster that I’ve had since high school or a 1963 Stratocaster that belonged to my friend Mike Landau. I purposely played a Stratocaster on every song. I like to do stuff like that – play one guitar for everything. I’m weird like that.”

He did add other elements to embellish his tone, such as a Waterloo acoustic, a Benson leslie amp and a Morgan AC40 and Tweed Bassman loaned to him by Josh Smith, but that was about it. With his set-up kept to a minimum, you get the idea that Fletcher enjoys simplicity over excess.

Like all good bluesmen, however, Fletcher holds one instrument particularly close to his chest. “It was funny to play my old partscaster,” he says.

“A good friend of mine; Jim Foote of Music Works in Lawndale California, built that Stratocaster body and I sanded it. Then Chris Fleming, before he was at the Fender Custom Shop, refinished it white because I was getting into Jimmy Vaughan at that time. I played it on my first record, in funk bands, in gospel bands – it’s got quite a history.

“And then I sold the body to a customer at Music Works. The guy I sold it to wasn’t doing anything with it so I asked if he would sell me it back three or four years ago. He did and I put it back together and the rest is history. It has a lot of sentimental value and having it on this record makes it my blues pathway because it all goes back to this guitar.”

Although Fletcher uses Ron Ellis pickups on most of his Strats, his partscaster breaks the mould with a set of Slider pickups that are described by the Australian manufacturer as reminiscent of “the best examples from the late 1950s and early 1960s [delivering] chime, shimmer, clean note decay with warmth and power.”

The 10-track album is awash with Fender’s sonic footprint. Tracks like Struggle for Grace sees Fletcher explore a minor blues while resisting the temptation to balloon his tone through added gain. Indeed, his stripped-down approach relies on technique, phrasing and note choice to deliver a punch rather than a bank of drive or fuzz pedals. In fact, his straight-forward set-up for the album relied on just one. “The only pedal I really used was a Vemuram Ibanez collaboration on their Tube Screamer,” he says. “It came out a year or so ago. I use that on everything that has a little bit more drive. And that’s pretty much it.”

While most Tube Screamers have a single clipping diode to create overdrive, the Ibanez TSV808 Vemuram Tube Screamer has two with internal dipswitches for tweaking the gain. Boutique and eye-wateringly expensive, it’s an impressive take on a stalwart pedal, and yet remains hard to detect on Fletcher’s latest release, providing him with a satisfying clean boost rather than any sizzle. “It feels good under the fingers,” he says.

To achieve the desired sustain, Fletcher says he adds two elements: volume and softness. “One of my ideal tones is BB King with humbuckers, with the amp turned up really loud. I try to get that sound on a Strat, so I need a pedal to get sustain and then I pick softer. The key is making the tube amp, whether it’s a Tweed Bassman, Deluxe or Super Reverb, have output volume. It’s hard to do with pre-amp type drive. It’s easier if you have a clean amp and you pick lighter – you let the note bloom. The softer you pick; the bigger the sound, if that makes any sense.”

What he doesn’t crave is grit and admits this approach wouldn’t suit everyone. “It’s more comfortable for me to play with less gain. Even with Gibson guitars, I play with less gain and let the guitar sing. I would say 75 per cent of the sound I try to achieve is from the guitar and the way I touch the instrument. I am sure guitarists who play with more overdrive than me would find it weird to play that clean.”

And yet his guitar soars. “You get the amp to cook just a little bit to a point where it’s sustaining the note and then you put on the overdrive with the level up and the drive down. Then the guitar reacts to nuances. You can pull more tone out of it. You get sustain, you get overtones. You can play softer or harder and it reacts.”

Over the years, Fletcher has been spotted playing numerous guitars including Telecasters, PRSs, Gibsons and, of course, Stratocasters. While he limited his choice to Strats on My Blues Pathway, he admits he enjoys dabbling.

“I romance with Gibsons,” he confesses. “I have a Les Paul and 335 and I can get there on those instruments quicker. Sometimes I don’t need the pedal – it’ll be right there in that sweet spot. But when it comes down to it, I’m a Fender Stratocaster guy. I come from California. A lot of my favourite guitar players played Fender Strats, everybody from Michael Landau to Nile Rodgers. Home base is the Stratocaster for me because that’s what I learned on, but different guitars make you play differently and sometimes I like what they bring out in my playing. When I play a Gibson Les Paul, it makes me play less and I can sustain notes more. The guitar sings when I play a slow blues. It sounds authentic. Then when I play a Telecaster, I’m thinking a roots kinda thing. It sounds like a soul record, like Booker T and the MGs. And then when I play a 335, you have really big notes on the high strings that I love.”

While he is happy to experiment, if it boils down to it, there is only one guitar for Fletcher. “If I don’t know what the music is going to be, I’ll be most comfortable playing a Strat because I can make it do what I want it to do.”

Sticking with the blues

A student, purveyor and an unapologetic disciple of the blues, Fletcher enjoys the freedom of focusing on the music he loves and lets others experiment or push boundaries. “A lot of times, musicians I play with learn the music and then explore other things that are far away from blues or what blues means. I don’t feel that way,” he says. “To me, it’s so natural; it’s like talking. It’s like air. Blues is always there. There is no way I can get rid of it. For me to get rid of blues in my guitar playing would be like me not playing guitar.”

He continues: “I listen to Jimi Hendrix, Joni Mitchell and The Carpenters, but blues is like my comfort food. It’s like everyday life and all these other things are foods that I enjoy, like sushi or Thai food. So many people have taken the blues and done something different with it or taken it some place else. I’m like; hey, do you know about real blues because you might like it and you might not want to take it anywhere else.”

My Blues Pathway sits alongside contemporary blues albums that unapologetically register their vested interests in the golden era of the blues. It indulges in the best of genre that shaped a fledgling Fletcher 30 years ago. “I want people to be excited about the things I was excited about. That was the lightbulb moment I had when I decided I wanted to go back to how it was when I first started and do the things that made me excited in the beginning,” he says. “Like seeing Albert Collins play live when I was 13. That’s what I wanted to do.”

My Blues Pathway is out now on Cleopatra Records.