“You can only feel that heavy cloud for so many years”: Korn on discovering seven strings and the healing power of Requiem

Korn guitarists Munky and Head on overcoming grief to deliver their most optimistic record yet, Requiem.

In the spring of 1990, Steve Vai unveiled his second solo album, Passion and Warfare. Both commercially and in the context of our instrument’s history, the album obliterated boundaries. It is Vai’s only release to go gold in the US, shifting more than 500,000 copies. More importantly, it marked the debut of his signature Ibanez Universe, the first mass-produced solidbody seven-string in the world. When 19-year-old James Shaffer first heard it, it blew his mind.

“It’s a fucking amazing album,” the Californian guitarist better known as ‘Munky’ enthuses over Zoom. “From the beginning to the end, I was like, ‘How does this guy make his guitar talk?!’”

It was awe-inspiring – until Shaffer noticed that the ‘little Italian virtuoso’ had missed a trick. “When I started listening to it over and over again,” he continues, excitement fading into careful thought, “I heard a couple of riffs that used the low string. But I wanted more of that. I remember when they released the guitar I was like, ‘I gotta have one of them so I can experiment with that low string!’”

Shaffer was already in love with guitar. He may have just started to rehabilitate his fingers after losing the tips of them in a motorcycle accident, but his playing quickly evolved into an obsession. After hearing Vai, he started going to his local guitar shop every week, armed only with the meagre salary earned through his “shitty job moving furniture”. He’d give them $100 each time just so he could noodle on the white Universe they kept on the shelf. He wouldn’t stop until they kicked him out.

Four years after Passion and Warfare, the Ibanez Universe helped forge history once again. Shaffer played it on the self-titled debut album by his band, Korn, belting out some of the heaviest riffs ever to batter metalheads’ eardrums. There were no solos or sweep arpeggios – nothing flashy to interrupt the power of seven strings reverberating at their deepest. Alongside fellow player Brian ‘Head’ Welch, Munky had helped build the groundwork for a new subgenre: nu-metal. Further popularised by acolytes from Limp Bizkit to Slipknot, the sound would rule heavy music for a generation.

Even after three decades, the Korn formula remains hypnotic. At just 32 minutes, their new album Requiem is an immediate reminder of the quintet’s power. First track Forgotten opens with low B strings booming, the sound this time blasting out of Shaffer’s signature Ibanez Apex and Welch’s ESP SH-7 EverTune.

“Some people are gonna be like, ‘Oh my god, EverTune, no!’” says Shaffer, laughing. “But let me tell you: it’s made our lives a lot easier. We’re not spending loads of time tuning our guitars because mine’s out of tune with Brian’s, and that carries over into our live shows; we can just beat the shit out of them.”

Frontman Jonathan Davis still darts from ominous goth crooning to hard-rock wails. His nonsensical scatting, which defined 1998 mega-hit Freak on a Leash, even makes a last-minute comeback on album finale Worst is on its Way. The slap bass of Reginald ‘Fieldy’ Arvizu clickety-clacks through the mix yet again.

Every song is a short, sharp anthem, evidence of the underrated pop chops that endowed the likes of Falling Away From Me and Here to Stay with radio dominance around the turn of the millennium. “We’re not trying to reinvent or anything,” says Welch, talking with Guitar.com on a separate video call from his home in Nashville.

The music may follow the same beats but the messaging of Requiem couldn’t be further from the snarl that marked Korn’s ascent. They announced the album with the single Start the Healing, on which Davis orders listeners to “break apart the pain” and assures that “you will succeed, pulling out these invaders”. Optimism espoused by the same voice that sang Daddy (“Innocent child / Looking so sweet / I’ll rape your mind / And now your flesh I reap”)? It’s jarring to say the least.

“You can only feel that heavy cloud above you for so many years,” rationalises Welch. “I love this album because it has a healing vibe. It’s got more positivity than past Korn records and it’s more vulnerable.” 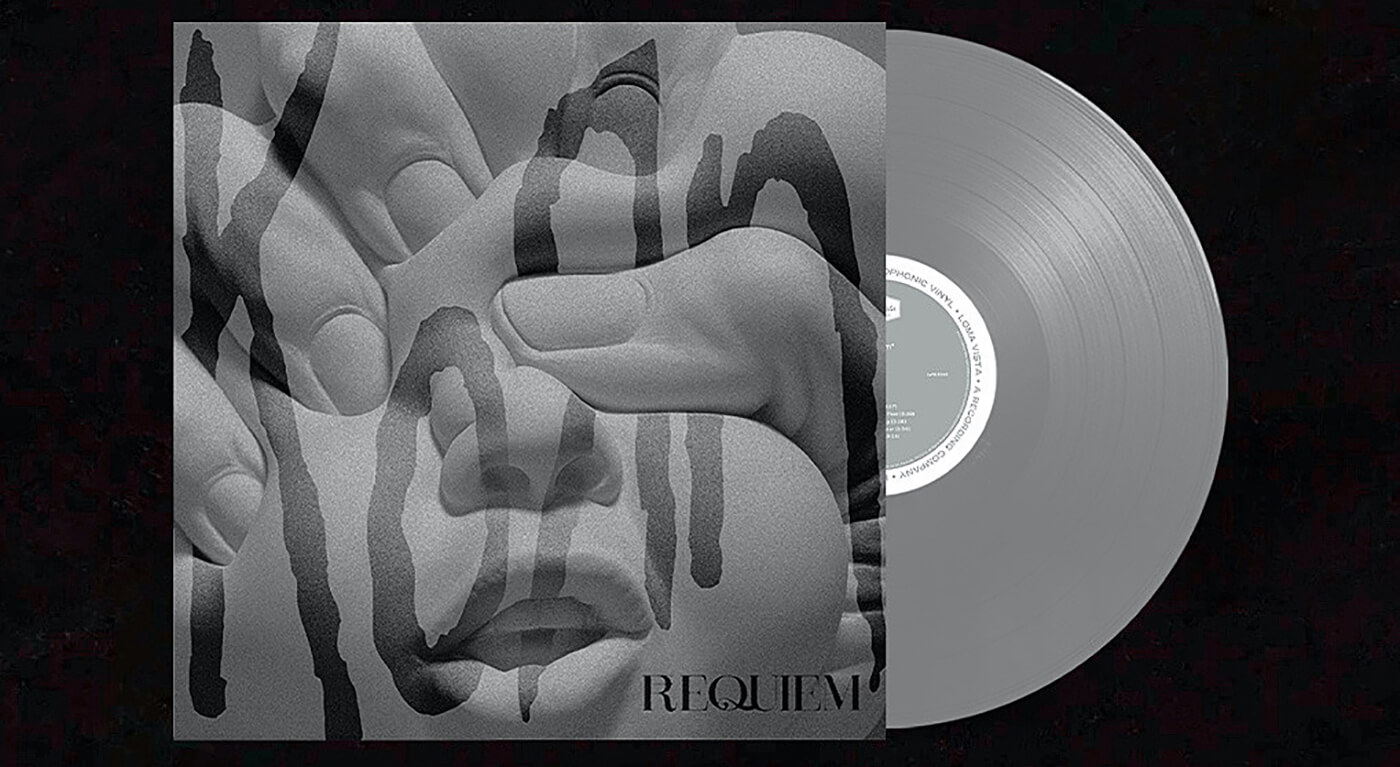 As well as alluding to the Roman Catholic ritual intended to bring peace to the souls of the dead, for Welch the title Requiem represents an end to the band’s recent grieving process. In February 2018, Davis’s mother Holly passed away at just 68 years old. Six months later, his estranged wife Deven died of an accidental overdose at 39, leaving behind two sons and a stepson.

“If you’re honouring the dead, I think that’s a good thing – a positive thing,” Welch says. “As far as lyrical content, it’s a natural progression from the last record.”

If Requiem captures Korn as they recuperate from grief, then its predecessor, 2019’s The Nothing, was the sound of them drowning in its blackened quagmire. The album was named after the antagonist of the 1984 fantasy film The NeverEnding Story: a raging, faceless storm that destroys imagination and innocence. “I am just a shadow of the man I used to be,” Davis howls during the song This Loss. “Everything I ever loved is always taken back from me.” Then, on closer Surrender to Failure, he openly weeps, “I failed! I failed!”.

The anguish that Davis voiced on The Nothing was as immense as it was fresh. “We were right in the middle of writing when the mother of his children died,” says Welch. “You could feel the shock and the grief. There were kids involved.”

“He wasn’t in the studio when we were writing The Nothing,” says Shaffer. Neither of the guitarists are eager to dwell on the topic, and both quickly go on to compare the melancholy of The Nothing with the camaraderie they felt in making Requiem. While The Nothing besieged the band from within, recording in 2021 – during the seemingly ceaseless pandemic – meant that all their worries lived outside their studio walls.

“Having Jonathan back not only lightened the mood but gave us a sense of direction,” says Shaffer, with a smile. “We were having so much fun but then we’d go back to our hotel and everyone was dressed like fucking Stormtroopers.”

“We ate together, we talked together, we wrote music together, every single day,” says Welch. “It was all very positive in a moment that was very uncertain, scary and negative.”

Despite the pandemic, the full band was present in the same studio as they recorded Requiem under the watchful eye of producer Chris Collier. Yet, as tracking on the album neared its conclusion, new cracks emerged in a five-piece that had only just plastered over the last ones. “Physically, Fieldy was there,” Shaffer says. “But I don’t know if emotionally he was there.” It’s not a statement he’s eager to clarify. “There were some moments where it felt like he didn’t want to be there.”

In June 2021, the bassist announced on social media that he’d be taking a leave of absence from the band he’d co-founded 28 years prior. He wrote that personal issues had caused him to “fall back on some of [his] bad habits”. “It’s been suggested to me to take some time off to heal,” he added. “I’m going to respect what was asked of me and take that time.”

Though Shaffer and Welch don’t specify the “bad habits” that have necessitated Fieldy’s hiatus, both insinuate that substance abuse is at least a serious part of the problem. “When I went through my bad habits,” Shaffer remembers, “I was partying, drinking and doing all kinds of drugs. I’d just lost my father and my mum had passed away five years before that. I understand using those crutches to make a moment feel better.”

Welch, who left Korn for almost a decade in February 2005 after years of alcoholism and methamphetamine abuse, also empathises. “I was drunk the whole time,” he admits. “Then I added hardcore drugs. I just got tired of being an addict, an alcoholic and a rock star.”

Now that Fieldy’s been removed from the fold for more than eight months, Shaffer reports that the bassist “is doing okay”. However, “There’s some more healing that needs to happen in his life before he can come back and play with us.”

For the time being, Korn are a man down. But Shaffer and Welch aren’t letting that dampen the psychological restoration encapsulated by Requiem. Their musical methods are still working in their fourth consecutive decade and, with touring returning, they agree that it’s a good time to be in Korn.

“This period is how people are gonna remember us,” says Shaffer. “They’re not gonna remember us for our wild parties. There are always parties but what did you leave behind once the party’s over, except empty bottles? Well, we left great music.”

Requiem is out now via Loma Vista.