The Lamb of God guitarist discusses his preferred riffs, unusual orchestrations, and the band’s most boundary-breaking record yet.

If you’ve ever seen Lamb of God live – or watched an errant YouTube clip – you’ll know that Willie Adler has the stiffest picking hand in all of metal. His forefinger bends around his plectrum so sharply that it looks like it’s been snapped in half. His remaining digits point rigidly downwards. And his elbow’s at a near-constant ninety degrees. It’s a technique that heavy music’s never seen before or since – so, the second Guitar.com secures an interview, we have to ask him what the fuck’s up.

“I’m sure it’s gonna give me arthritis pretty soon,” says Adler, laughing down the phone from his home in Richmond, Virginia. “Believe you me, if I could do it any other way, where my hands were relaxed, then I would.”

When Adler first picked up the guitar, he only had a few lessons before directing his focus entirely on metal, which meant he never received much tutelage. “It all just grew out of comfortability and the way I wanted to speak through my guitar,” he says, “and the way I accomplished that was manipulating my right hand into the way it’s grown into. It was a very natural unnatural progression.”

His technique may look odd but you can’t argue with the results. Since the guitarist joined the band in 1999 and catalysed their name change from Burn the Priest, Lamb of God have blossomed into the US’s mightiest extreme metal force. Alongside Slipknot, Machine Head and Killswitch Engage, they co-helmed the New Wave of American Heavy Metal. Between 2006 and 2015, everything they released cracked the Top 10 of the Billboard album chart. They’ve also accrued five Grammy nominations and gigged with every one from Slayer to Metallica.

Musically, Lamb of God have changed next to nothing since their explosion into the mainstream. When you’re doing as well as they are, why would you need to? Frontman Randy Blythe has always snarled the most overtly political lyrics he can, famously targeting the Bush administration and Iraq war on 2004’s Ashes of the Wake. The band’s self-titled 2020 album shot from the hip at everything from the military industrial complex to an at best apathetic American healthcare system. 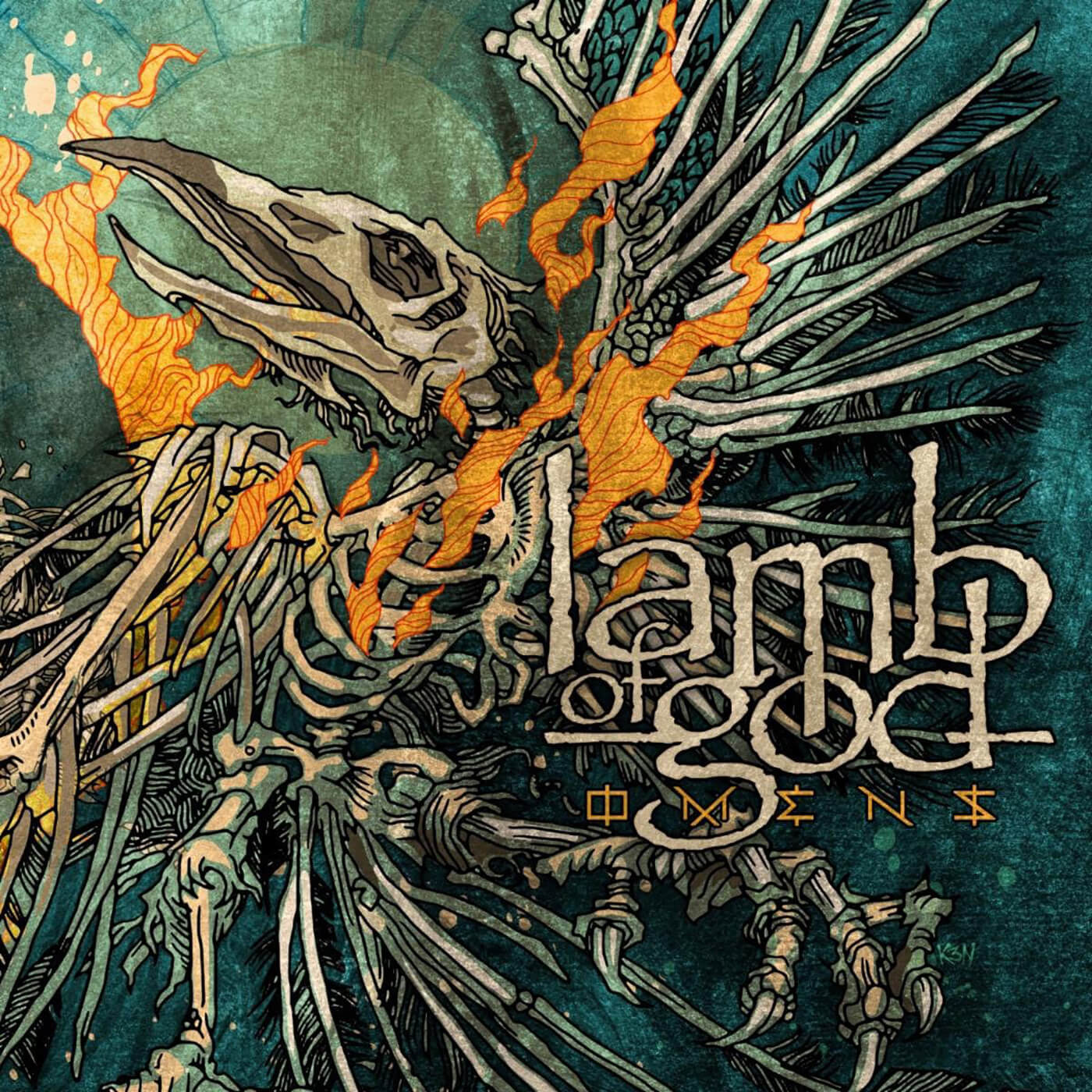 “I like the tonality of the low string: it just seems heavier to me,” says Willie. “And I was always fascinated by the guys who could do the super-techy riffs. I love [Megadeth’s 1990 album] Rust in Peace and what Marty [Friedman] did on that record. He was just unbelievable in how he solo’d and riffed. I’ve always gravitated towards the atonal Slayer-type riff too, where there’s a lot of minor going and it doesn’t necessarily conform to one theory or the other.”

After decades of sticking to the same guns, Lamb of God are deepening their arsenal on new album Omens. The last time they sounded this intrepid was on their debut. Lead single and opener Nevermore signals from the off that something wickedly wacky this way comes, as it interrupts its own rolling riff with jagged squeals.

Adler laughs when we bring it up. “That was one of the first songs that Mark sent me when we were talking about writing a new record, and I was like, ‘What is this?!’ It sounded so great to me and so off-the-wall. It reminds me of an old A Life Once Lost riff: it’s super-chaotic and those piercing, stabbing chords are what make that riff. And they make that song, because it starts with them and comes back round to them. That song, to me, is like walking through an asylum.”

Elsewhere, Denial Mechanism goes full hardcore-punk mode, chords scurrying over the most simple but primal of drum beats. That’s before September Song ends Omens on its most evolutionary note. A barrage of clean hammer-ons and pull-offs commence the track with an aggressive blues lick, which naturally escalates to Lamb of God’s archetypal territory of riffs and roars – albeit backed by classical strings. One last marathon of tapping builds to the album’s climax. It’s among Lamb of God’s most adventurous, bombastic and brilliant moments.

“It unfolded in such a way that, when I wrote the demo for that song, it sounded nothing like where it ended up,” Adler explains. “Josh [Wilbur, Omens’ producer] had the idea of the symphonic parts and, at first, I was kind of unsure: it sounded like everything was fighting each other. I was just hearing it the way I heard it in my demo; I had to get my head out of that space and realise it had become a different song.”

So why now? Lamb of God have been Lamb of God for 23 years and the furthest they’ve pushed themselves since their debut is when Randy discovered melodic singing in time for 2015’s VII: Sturm und Drang. According to Adler, it’s because they all recorded in the same place for a change.

Previously, recording for Lamb of God was an isolated process. Talking to Loudwire in 2015, Blythe described all five members in the studio together as a “too many cooks” scenario. “You get half a line out and they’re like, ‘Wait, wait, wait, wait!’ I don’t go there when they’re tracking drums and, before they’re halfway through the first song, say, ‘You missed something! You screwed something up!’ You gotta let me get my groove on. I gotta do my thing and flow.”

Seven years later, he’s clearly softened his stance. Willie says: “The idea [of recording together] was presented to us and we were like, ‘Why not?’” Knowing that the collaboration would continue when they started recording, Lamb of God had the freedom to enter the studio with incomplete ideas.

“There were songs that we had been working on in pre-production where we didn’t know how they were going to take shape,” the guitarist continues. “There were moments within songs, particularly September Song, that we didn’t know how we were going to flesh out. We could not only sit together but, with the benefit of a studio, we could actually hear what everybody else wants.”

Adler tracked Omens using a plethora of ESP guitars, including two USA models, his signature model and another Evertune-equipped model tuned to E. Unsurprisingly, he feels a strong sense of loyalty to the Japanese brand. “I remember the day when I fell in love with them: when the first one showed up at my house. It just felt natural. The fretboard, the way it played – everything just felt super-smooth. I can’t necessarily put it into anything tangible but that was just the way it felt – it felt right.”

Lamb of God are already touring to promote the album. The week before Guitar.com’s talk with Willie, the band headlined Bloodstock Festival in Derbyshire to 15,000 people. Right now though, the guitarist is at home, with Vio-lence and former Machine Head player Phil Demmel filling in for him on the European dates.

“I miss my dudes,” says Adler. “It’s hard to think about them being on stage and me not being on stage with them. But at the same time it’s simply something I had to do. I really appreciate Phil for being able to fill in.”

There’s been plenty of speculation as to why Willie has been missing shows. In an interview with KNAC.com, Vio-lence singer Sean Killian said Demmel was touring with Lamb of God because “a couple of the guys in the band are not down with doing the vaxx”. As much as we’d have liked to, Lamb of God’s representatives forbade us from asking Willie why he’s not on the road right now.

Instead, we ask if we’ll see him when Lamb of God return to Europe in December, when the band headlines the State of Unrest tour with Kreator, Thy Art is Murder and Gatecreeper in support. “I’m not sure yet,” he replies. “I’ve still got to figure that out.”

While Willie mulls everything over and hopefully finds a path that lets him happily return to the road, he can at least take pride in the most boundary-breaking album Lamb of God have made in more than 20 years. “Lamb of God to me is a band that doesn’t necessarily stray from its roots but keeps you on your toes,” he says. “The biggest thing with Omens is to stay Lamb of God but stay fresh. I want kids to be like, ‘Damn, they did it again!’”

Omens is out on 7th October via Roadrunner. Lamb of God tour the UK with Kreator, Thy Art Is Murder and Gatecreeper in December.