“I reinvent myself with each song”: guitarist Lari Basilio on her genre-hopping musical evolution

The Brazillian instrumental-guitar maestro on her varied inspirations, sharing her knowledge with others and working with Joe Satriani on her new album.

For Brazilian guitarist Lari Basilio, playing instrumental music is a freeing experience. She loves the creativity of exploring various styles, tempos and alternate tunings. You can hear it all on her new album Far More, which is the perfect title for her brand of soaring instrumental music. The independent release, out this August, even boasts a guest track from guitarist Joe Satriani. She said having him play on her album is a good fit, as well as inspirational.

“Besides all of Joe’s qualities as a musician, I really identify with his melodic sense. His approach is so unique and so lyrical! And it really means a lot to have him participate in this project,” says Basilio.

Lari’s gone way beyond her early days of strumming a few chords in São Paulo. Nowadays, she’s praised for her melodic playing, hybrid fingerpicking and legato technique. Music was part of her home life as her father, a singer and guitarist, taught her to play acoustic guitar. Later, she switched to a Stratocaster copy she bought with money from a part-time job and her personal style really blossomed.

Today, she’s an instructor herself, having released several DVDs and masterclasses. Lari explained how she selects the content for her tuition materials: “The masterclasses are always about things inherent to my playing and style and also about themes that I love to share, for example, my approach to fingerpicking technique and creating riffs as a central theme for songs. I have a few lessons available at jtcguitar.com.”

Her recordings – the Lari Basilio EP (2012) and The Sound Of My Room CD/DVD from 2015 – are both stepping stones to where Basilio is at now. Far More, produced along with Rodrigo Rios, includes eight diverse instrumental tracks and one vocal song: a rearranged cover of Michael Jackson’s Man In The Mirror with Siedah Garrett on vocals.

We checked in with the versatile guitarist to learn more about her history, the new album and her participation in this year’s G4 Experience, a popular guitar camp led by Joe Satriani.

How did you first get started playing guitar?

“My very first instrument was actually organ. When I was four, I started taking lessons and studied it for many years. It was a great foundation for the theory part of it. After my dad taught me my first guitar chords, I spent a lot of time studying by myself and learning to play songs by ear. Some years later, I started taking guitar lessons with private teachers from my hometown, São Paulo.”

What Brazilian music do you like? I know you had an early collaboration with the popular Brazilian band Angra…

“I do like MPB, which means ‘Música Popular Brasileira’ in Portuguese. I had the pleasure of having Felipe Andreoli, Angra’s bassist, as a special guest on my first EP. He played on a track called Gold. Felipe is one of the most talented bass players and I really admire his work.  ”

For this new recording, you brought in some of the top session guys out there…

“I had an incredible band for this album: Vinnie Colaiuta on drums, Nathan East on bass and Greg Phillinganes on keys and piano. ”

Did you write all the songs?

“I wrote and arranged all the songs except Man In The Mirror – that was written by Siedah Garrett and Glen Ballard – but I made a new arrangement for it. It was an honour having Siedah sing this new version of her song on my album. I feel that the song carries a very important message and it’s something that we should remember every day.  ”

What was the writing/recording process like for the new album?

“I write all the time, so I have lots of songs, or pieces of songs saved. But, when I moved to LA in 2017, I focused more on writing songs for this album and aiming for this project. For the recording process, we recorded eight tracks in one day at Capitol Studios in Los Angeles. After that, I spent some more time in the studio adding and finishing the guitar parts.”

Joe Satriani guests on Glimpse Of Light. How did you get him involved?

“I met him at the G4 Experience in January when I was in the middle of the recording process. I really wanted to have a guitar player as a special guest, but it had to be someone who I had something in common with. Then I decided to invite him and I am so honoured he was a part of it.”

Did you record the song live together?

“Due to our schedules, we couldn’t get together to record the song. So we did our parts separately. But he plays a solo and we play together during some parts.  ”

Speaking of the G4 Experience, how was it being involved in that?

“It was fantastic! We had a few days of pure immersion in music and guitar. Lots of music, exchanging experiences and knowledge with the campers and the other guitar players and instructors. Definitely an experience that I’ll never forget.”

How do you adjust when you have to interpret your recorded music in a live environment?

“I just love playing live. The stage is one of my favorite places in the world, so I’d say that I adjust very well. To me, there’s nothing like being on stage. It brings a tonne of unique emotions and feelings that only those who have also performed on stage are able to feel what that experience is like.  ”

What guitars did you play on the new album?

“I played lots of different guitars such as Suhr Guitars – a Classic S and Classic T – a Gibson Les Paul, some vintage Fender Stratocasters and Telecasters and also a 12-string guitar by Danelectro. And I used a Maton acoustic guitar – a MicFix [Michael Fi] signature model – for the acoustic track.  ”

Tell us more about that acoustic track Sempre Comigo [‘Always With Me’]. Why did you select that title?

“  I always like to bring something that represents me into my work and also something that people from Brazil can relate to. That’s why I decided to have a song title in Portuguese. ”

What do you bring to that song?

“On the acoustic song I mix flat-picking and fingerpicking. I also used an alternative tuning: the C-A-D-G-B-E tuning. I love exploring alternative tunings. I feel it really helps me play new sounds and it also stimulates me creatively.”

Instrumental music seems like an organic experience for you, is that fair? 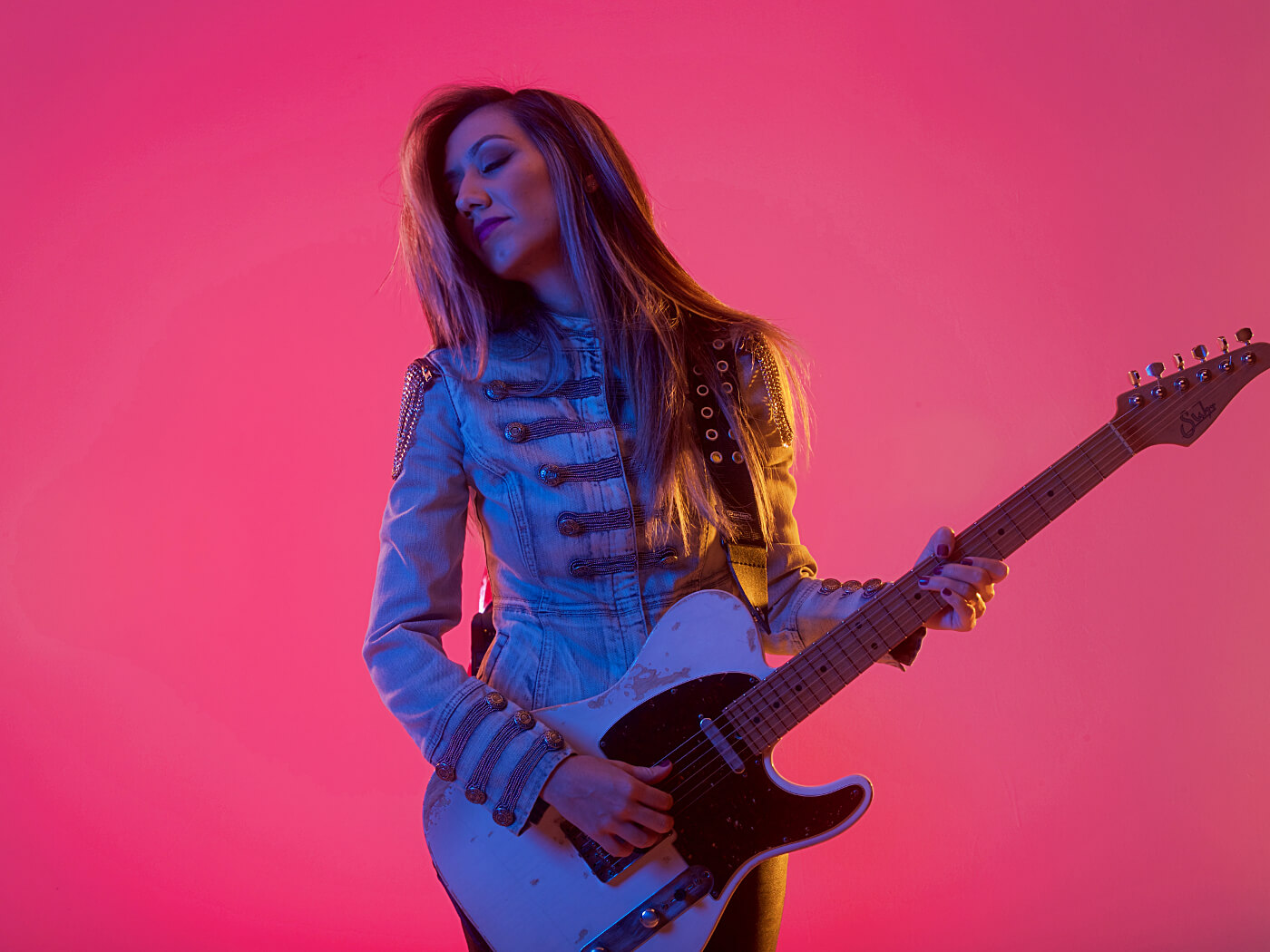 “ I’d say that instrumental music has been my voice. I really feel a freedom in many different aspects of it, such as the creativity and the different styles. To be able to evolve and reinvent myself with each new song is wonderful.”

To learn more about Lari and her music, visit laribasilio.com.