The Against Me! guitarist on embracing a vintage Jaguar she got from a Heartbreaker, learning the value of momentum, and why she’s not waiting around on latest EP At War With The Silverfish. 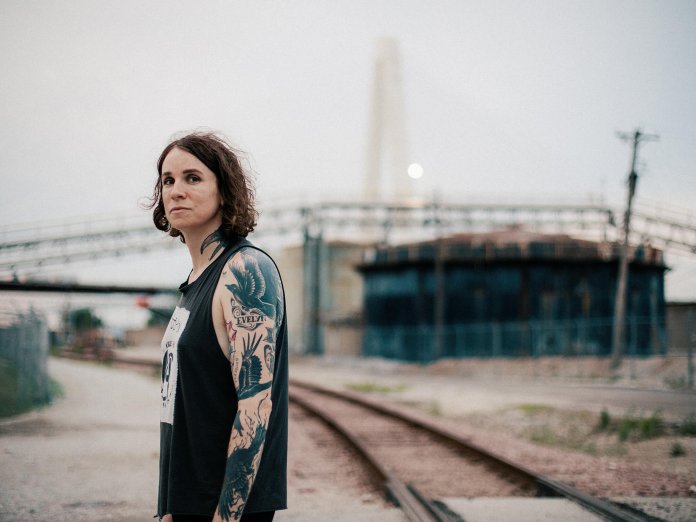 Musicians tend to spend most of their careers going round in circles. For decades, they have trodden the same time-honoured tracks of making an album: write it, record it, promote it, release it, tour it, stop and breathe for a bit, repeat. Truly, only something seismic could alter it.

Then something did. The monumental and devastating impact of the Covid-19 pandemic upon the music industry has already been well-documented, particularly in regard to the essentially legally mandated shutdown of live music forcing artists to cancel tours and cut off a large source of income at the source. Other artists had to delay going into the studio or push their albums back to better time the release with the eventual return of touring. Yet even now live music is back, release plans are being hampered by the current vinyl shortage, meaning that artists are forced to choose between delaying the album release until the vinyls arrive, or releasing it digitally and physically at different times.

But if the traditional album cycle really is breaking down, then Laura Jane Grace certainly doesn’t mind. “What’s the point of adhering to the way old cycles work?” she questions. “Delaying [the release] of music you’re excited about because there’s a year long vinyl wait time sucks. It’s ridiculous. The immediacy and the urgency of the song tends to get lost for me if I have to keep it secret for that long. It takes all the fun out of it.”

Sticking up a middle finger to the arbitrary limits of the release cycle, Laura decided there was no point in putting a wait time on releasing new music when there didn’t need to be one. She subsequently released her latest EP, At War With The Silverfish, with no prior warning at the end of September, even forgoing the now-standard #NewMusicFriday approach by dropping it in the middle of the week.

It’s a fitting choice for a record that is arguably the product of the slow destruction of the release cycle. With no opportunity to tour in the wake of her solo album Stay Alive last year, she decided to keep herself in a creative headspace and carry on writing. “These songs are kind of like misfits,” Laura explains. “They didn’t really fit with where I saw myself wanting to go for the next full-length but at the same time the seven songs together felt cohesive and there were lyrical themes that repeated. They just made sense together. I’m not trying to put out this huge mission statement of a record right now, I’m just trying to put out music and keep myself going mentally because it makes me happy.”

At War With The Silverfish is, indeed, a product of lockdown life, but never in a way that feels particularly overt. It wouldn’t be right to call this a ‘pandemic record’, and it was never Laura’s intention to write one – it was only ever a distraction from the monotony and gloom. It became particularly vital during the parts of quarantine that she spent completely alone: “I have an 11-year-old and I do month-on-month-off parenting, so I have my daughter for a month and then the next month I won’t. That schedule was arranged to make sense with touring, but for six months out of the last year, I was completely alone.”

Indeed, there’s something evergreen about the record’s themes of memory, nostalgia and delusion, yet they all feel particularly pertinent to the time at which it was written. “Even the title At War With The Silverfish is an example of how inspiration manifests itself in a pandemic situation,” says Laura. “I’m an avid collector, I have a ton of books and a ton of vinyl too. Silverfish eat books and the cardboard of records. If you have massive collections, then they’re a problem, because you’ll find them under things, behind things, and it started becoming an obsession, laying there at night after month six of not leaving your apartment, thinking ‘I’m trapped in here with these bugs that are slowly eating my books and my records’.”

This train of thought evoked a feeling of the past slipping further and further away as the so-called ‘before times’ became an increasingly shrinking speck in the distance. “You’re wondering where life went, and what happened.” The bright, richly textured Yesterday Pt. II finds Laura almost in disbelief at how long ago an lover departed her life when it still only feels like a fresh wound, while the ingeniously titled, brooding Smug Fuckface finds her contemplating a similar situation in a more sobering mindset, wondering what she could have done differently. It speaks to the lockdown-borne habit of filling your head with thoughts of the past because the present is at a standstill and the future is too uncertain to contemplate.

But this train of thought, of being trapped inside with only bugs for company, is reminiscent of the kind of mild insanity that comes with a severe case of cabin fever. It’s captured best on Day Old Coffee, where the everyday ritual of necking a cup of joe to get through the day is made into something more morbid: “Day old coffee microwaved to boiling, Pour it on my eyeballs and boil my dumb shit brains out. ’Cause I don’t ever want to hear or think or speak again”. Indeed, when there’s no chance of being able to go outside and soak up inspiration from the world beyond home, it had to be searched for in unexpected, frequently more mundane places. “You look to the everyday and you have to find a way to make those things interesting,” explains Laura. “In fact, it’s more a case of recognising that those things are interesting and that there’s value and meaning in those things. I guess the job of the artist is to be creative with that.” 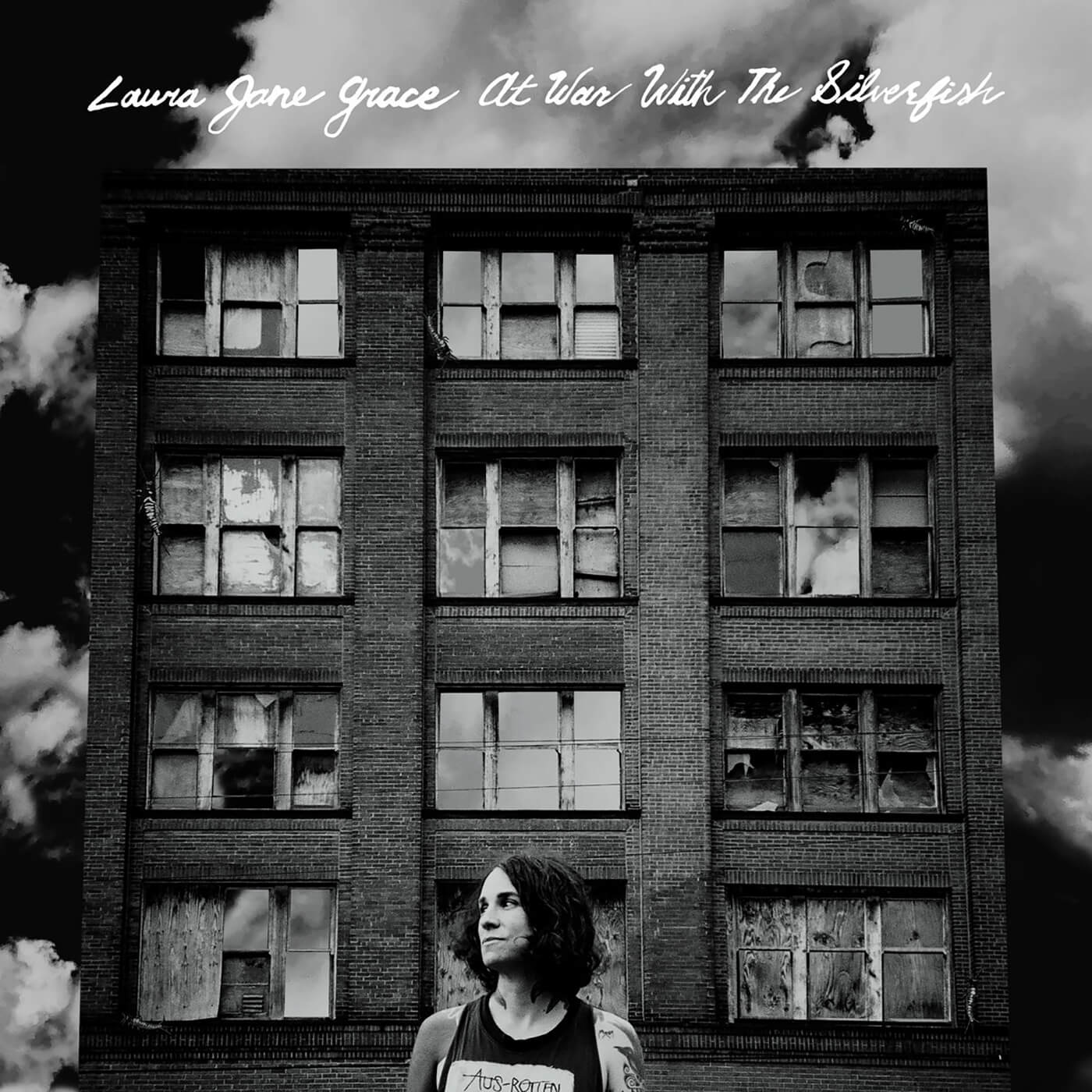 Naturally, given the circumstances, At War With The Silverfish was recorded in Laura’s home studio, where, without the constraints of time or money, there was space to move at whatever pace she wanted, and to experiment as much as she desired in a way working in a conventional studio wouldn’t permit. “It’s fantastic, because that’s what creativity wants.” It might not always be the way she continues to work in the future, mind. Although the ‘death of the studio’ seems to be looming as technology increasingly facilitates making music at home, she’s not an advocate for it, and still enjoys taking a trip away to hole up in a studio in order to lay down tracks. In the very least, the option is open, given that both kinds of studio can offer similar quality recordings.

Laura has been known for playing Rickenbacker guitars throughout her career with Against Me! – “I think they’re the coolest guitars ever made.” For her solo music, however, she has favoured other kinds of guitars, with their own unique stories. The main electric on At War With The Silverfish is a 1964 Fender Jaguar she dug out from underneath her bed, where it had been sitting, its strings unplucked, for almost two decades. “I got it back in 2003 from Stan Lynch, [the original drummer from Tom Petty and the Heartbreakers]. He had a music store in Gainesville and he was selling off his personal collection. I never played it, but a couple of years back, I was like, ‘This is stupid. I’m being so precious with this guitar because it’s old but this guitar wants to come out, it wants to rock. It slowly became my favourite guitar of my collection.” Her main bass guitar here is a signature Matt Freeman Squier, gifted to her by the Rancid bassist himself after he played it while out on tour with her and Against Me!.

For the acoustic sounds on the album, particularly on opening track Three of Hearts, Laura used a Yamaha MT3. “If you’ve ever been to a recording studio, I feel like 95 per cent of them always have that one old Yamaha acoustic guitar, and the engineer will be like ‘You should use that to record, don’t use the acoustic you brought with you.’ And there’s a reason for it! They have really low string noise and record beautifully. This MT3 is a newer model, but it plays like those guitars. There’s no string rattle, there’s no bristle. It’s just a beautiful guitar.”

At War With The Silverfish has, overall, seen Laura Jane Grace rolling with the punches and adapting to the times, spinning straw into gold when conventional band life has been temporarily withdrawn. “I’ve been, in many ways, trying to demonstrate to people by continuing to put out solo records that I’ve not lost interest in music,” she says. After all, Against Me! has not released an album since 2016’s Shape Shift With Me, creating space for hasty conclusions about the band’s future to emerge. Part of that delay is down to the pandemic, with the punks having begun work on a new album that had to be put on ice when Covid-19 hit, particularly since it was harder to regroup given that they all live in different cities. “It’s kicked the shit out of us.” Work has since resumed, however, on new songs.

“The pandemic has taught me the value of momentum,” Laura thoughtfully concludes. Given the quality and frequency of her output, even without the Against Me! name, it appears she’s mastered keeping herself going. And when there’s more music to enjoy, who is to complain?

Laura Jane Grace’s At War With The Silverfish is out now.