“Humanity is fucked, but we can still enjoy music and have the best time”: Lights on embracing positivity and feeling like a badass on PEP

Alt-pop legend and comic-maker extraordinaire Lights is back with her highly anticipated new album, PEP. After a few years of self-growth, she’s more confident than ever.

“I’m tired of writing sad songs right now,” says Lights, her voice full of energy and ardour – even if the Ontario artist admits that she’s just rolled out of bed. “I feel like your mind believes everything you tell it and that goes for good or bad, and I decided to start writing stuff that made me feel like a badass.”

Though typically described as an alt-pop artist, Lights’ music is genre-bending, tying pop and indie with elements of electronic and rock music, dusted with ethereal vocals and fiery feminine flair. Her career spans over a decade, and while her music has always been spritely, it’s often laced with darkness. “I always say I’m the happiest sad girl you’ll ever meet,” she tells us. “There’s always gonna be both sides in my music.”

The writing for Lights’ fifth studio album, PEP, began just before Covid-19 struck, its core messages of positivity ironically amplified “times 10” by the worsening pandemic. “I was able to really home in on this idea of, even though we’re all gonna die, we’re at rock bottom, everything’s chaotic and humanity is fucked, we can still sit here and enjoy [music] and have the best fucking time, and all the songs are essentially that,” she says. “It’s this really fun, uplifting, cynical, sarcastic pep talk on the back of being in this misery. That’s really the dichotomy of this whole project.”

The record’s candid and honest songwriting comes as a result of Lights going through some counselling and figuring out the deepest inner corners of her happy-sad-girl brain, “I thought I could keep the two worlds [music and personal life] separate but it’s impossible to live a double life and it’s in keeping with the message of PEP. I had a really good time with the over-marketing of it, it takes one look to see that it’s beyond bright colours, underneath it’s a dark concept.”

Her’ 2017 album, Skin & Earth, came accompanied by a six-issue comic series, written and drawn by Lights herself. PEP, too, has its own self-penned panels, with new book The Clinic depicting listeners experiencing Lights’ new singles via VR.

“It’s a metaphor for music,” she says. “We use music to get away, to escape from our realities. The Clinic is a big metaphor for an album. You plug in and for a minute you can forget about life, and that’s what we love about music. It’s also my way of connecting it [PEP] to the Skin & Earth universe, which is the comic world I created with the last album. My universe is so much bigger than just the music – there’s always something more for the fans.”

Each of the album’s music videos so far have represented a different primary colour, each matching up to its song’s character and meaning. We saw Real Thing featuring Elohim in blue, Prodigal Daughter in red, Salt and Vinegar in yellow and latest single In My Head featuring Josh Dun culminates all three colours together, and gives us our first snippet of The Clinic brought to life outside of its comic-book setting: “Typically when you see primary colours together, it’s like Sesame Street or childhood; it’s very innocent and clowny. It’s not what you’d [typically] identify for a cyberpunk, dystopian setting. But that’s what I like. I like to mix up things that don’t exist.” 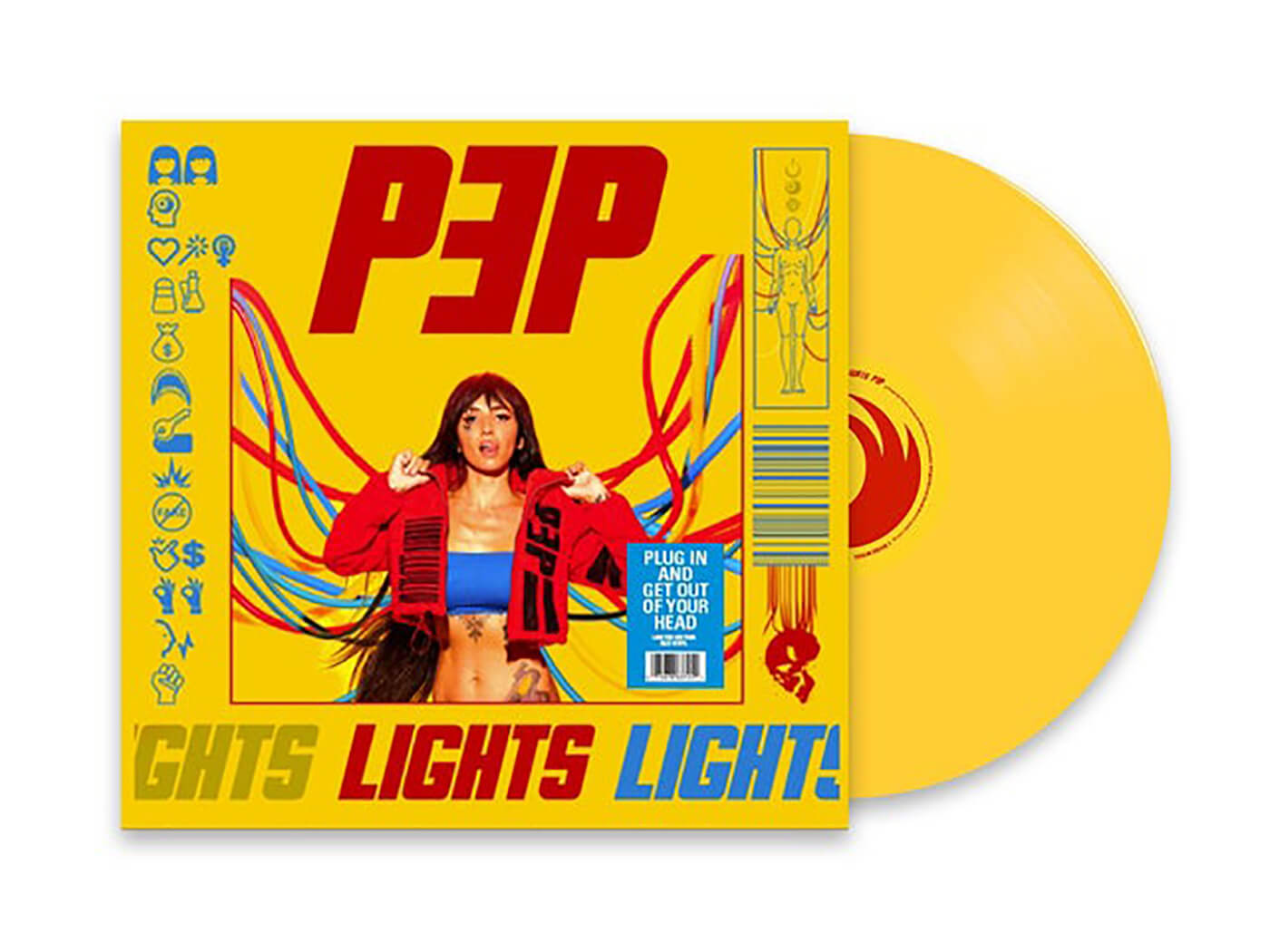 Lights has also brought each single to life with a short comedy skit, filmed and posted to social media, and in which she dresses up and acts out each song’s personality as if they’re being interviewed.

“The songs are so blatantly a facet of my personality,” she says. “A song like Prodigal Daughter is exactly the way the persona is. It’s me owning my sexuality and my confidence over years of whatever societal oppressions are on women or someone who’s been raised in a religious environment. There’s wisdom to that character but also, I’m gonna be a slut, I’m gonna go in my slut phase,” She exclaims with a giggle, “She’s Danger Town! She’s the part of me that does knife-throwing and is military-ready but is also wearing a bikini. I refer to my style as ‘tactical hoe’, and that’s for sure her!”

Lights jokes how every song is like a therapy session with herself, and track Voices Carry is one that stands out for its emotional maturity. With lyrics of it’s hard to win when nobody wanna listen and it’s hard to change when everyone wanna stay the same, Lights’ therapeutic unravelling of her religious upbringing and drive to change the way she celebrates her individuality are prevalent in her her lyricism, bouncing across the pop-punk drumming and bouncy guitar work.

PEP hosts 13 songs which implore everything from female empowerment to mental health but there’s one track which has been a high talking point for the fans. Lights has collaborated with huge names, such as Bring Me The Horizon, Owl City and Deadmau5 over her career, but this record sees Josh Dun of Twenty One Pilots spice up In My Head with the addition of his signature drumming. “I wrote In My Head with Tommy English and Michelle Buzz,” says Lights. “People were stoked about it at the label.”

During the making of the album, she visited her label Fueled By Ramen, where president Mike Easterlin had a surprise for her: Josh Dun’s drumming had been added in to In My Head without her ever knowing it was going to happen. “I’m usually very involved in all
aspects of my music,” says Lights, “but he knew that I would be stoked. It really fucking elevated it and it had this energy that it didn’t have before.” She gushes over her friend Dun’s gifted addition to the track, “It was the nicest, warmest thing anyone could do in this industry and I was just so pleased.”

The Baby I’m Back tour for the new record is now underway, and Lights had a little taste of returning to live music for her first post-pandemic show in November last year, when she took to the stage with Deadmau5 for his Day of the Deadmau5 takeover at Red Rocks Amphitheatre, Colorado. “Things do go through your head,” she says. “Like, ‘Do I remember how to do this? Do I remember how to sing?’ In my career, I’ve never been that long without going on stage, so when I got out there it was so good. I got off and I was overwhelmed, I started crying. It was a combination of ‘I missed this’ and ‘I can still do this’.”

If you’ve got tickets to an upcoming show you can expect a brand new set – and she even left her trusty acoustic at home. “That’s not what PEP is about,” she says. “It’s loud and belligerent and dark and vibrant all at the same time. I’ve honestly never been less nervous for something,” she adds. “After three years of honing in on your personal issues and dealing with your shit and making the best album you feel you’ve ever made, I’m walking with more confidence than I’ve ever had.”

Like many artists, she reaps the true reward of her work when soaking in the energy of a live crowd: “There’s no physical manifestation of the reward of the music you release when you don’t get to play to people and hear them singing, the energy of people is so good.”

At the time of our chat, Lights is waiting for some primary-coloured custom Fenders to be delivered to bring her set up into the true primary coloured chaos of PEP: a yellow Telecaster, a blue Stratocaster and bold red Jazz Bass all of her own design. She also brings along the new Neural DSP Quad Cortex on tour, which features all the tones, switches, tempo changes and tunings she needs in one box. Luckily, her new trio of guitars arrived just in time and she proudly posted them to Twitter.

LOOK AT WHAT @FENDER JUST SENT FOR TOUR

Though it was released on 1 April, PEP is no April fool. “There’s so much in the world that tells us what to be and who to be and that we’re not enough,” says Lights. “This record has got all that stuff in it: it’s, ‘I’m a badass, I’m gonna do things my way’, ‘I’m gonna talk in this part, mix genres here and play guitar here’.”

Lights is a force not to be reckoned with, challenging what we expect of a guitarist by bending the rules and mixing genre styles within her playing, “There’s no rules in music, and when people hear [PEP] I hope they don’t feel like they’re listening to every other record. It should remind you that if you wanna make art, make art your way.”

PEP is out now on Fueled By Ramen.