“Things were going so well, and then we all just had to go home”: Lindsay Ell on guitars, technique and making an album during a pandemic

Lindsay Ell tells all about the challenges of recording her new album Heart Theory when the world shut down halfway through recording, and how legendary producer Dann Huff has become her new guitar coach.

It’s often said that you should never meet your heroes. But if Lindsay Ell had not, her whole career may have been very different. The pop-country blues-rock (that’s right!) singer-guitarist was discovered in her teens by fellow Canadian Randy Bachman of The Guess Who and Bachman-Turner Overdrive, and he produced her early recordings. By the time she was in her 20s, Ell had shared a stage with Buddy Guy.

Moving to Nashville via LA, she was mentored by Kristian Bush (of country superstar duo Sugarland) who produced her first major album, The Project. She’s since toured with Keith Urban, traded live chops with Billy F Gibbons, and Brad Paisley built a relic’d Strat for her. For her latest release, Heart Theory, she’s moved up a league to work with award-winning producer Dann Huff. If you judge a person by the company they keep, Lindsay Ell is already A List…

Heart Theory is mostly breezy modern crossover country with some superb bluesy playing from Ell, but it’s also a deeper concept record (based around the Seven Stages Of Grief psychology model) with ballads that touch on a troubled past. “Though some of the subject matter is tough,” she says, “I didn’t want to write a depressing album. It’s full of hope, and I want people to dance!” Today, though, Ell is keen to talk about guitars and gear, something that’s obsessed her since she was just eight years old…

Dann Huff’s track record is pretty faultless… but how does he work?

“I’ve wanted to work with Dann ever since I moved to Nashville, I’m not going to lie. I’m grateful it took a while to happen, though, because this is a different record to what I would have made three years ago with him. But now I know a little bit more about who I am, I think it made sense.

“I was so nervous the first session we had, I was literally shaking. Here’s a man who’s played guitar on Michael Jackson records, Madonna records…  oh my God, it’s Dan Huff! But he was super nice. Just after the first day, he made me feel like I could do anything. He was shouting: ‘We’re going to make the best record! It’s gonna have the best guitar solos! It’s going to be incredible!’ [laughs] He was just so empowering. The second day I went in, he said, ‘Lindsay, for a debut guitar player (for him) you really inspired me.’ I call him my ‘guitar coach’ now. I never want to play another solo without asking Dann; ‘What do you think!?’”

Would you say he’s changed the way you play guitar?

“He didn’t force me in any direction. He was just very good at listening and then guiding me. When I solo, it can be a case of me just blazing away with a lot of improv… But he was so good at picking out the licks or phrases that I should focus on, or sometimes move. Sometimes it was as simple as changing the last note of a solo which made all the difference. But it still felt like me, totally, and he had such a good ear for that.”

Did he bring his own bag of production tricks and gear that you have learned from?

“Well, Dann is well known as the Tone Master and at first I probably tried to over-impress him. I had all my pedals, I’d been working on as many new tones as I could, but the whole thing ended up way more simple than I could have ever imagined. The whole album was mostly just one guitar and one amp.”

“Oh, he got really involved, believe me. There are times on the solos where he’s my live guitar tech: as I was playing, he was there by the gain knob, giving me an extra boost as I go! Having Dann Huff as your guitar tech; well, that’s like the coolest thing ever.

“But Dann was insistent on that simplicity of sound. He kept telling me, ‘I only really know know how to do a few things, but I know how to do them really well.’ And you cannot argue with that.”

“His guidance was really special. Being in a studio can be quite an intimidating environment, just the pressure to come up with something that will be set in concrete can feel hard. It’s so different from playing live. So I did learn that what I played had to be a lot more intentional. Some people will record records as if they are a live show, but to me what Dann helped me do is the sign of a real producer. Everyone in Nashville says: Oh, Dann Huff is just the best. And I always knew that, but now I know why.”

It’s almost inevitable for 2020, the situation with COVID-19 must have affected this album in some way?

“Oh, yeah. The last day of band-tracking was actually the day before quarantine in Nashville. It was such a weird day, as things were going so well, but we had the TV news on in the studio… and we all just had to go home.

“But I have a little home studio in my house, and I carried on from there. A lot of the final vocals are recorded there, I sent Dann files, and he mixed them at his house – obviously, he has a really nice home studio!

“But for the guitar parts, I was like: ‘How am I going to record these remotely?! Without my Guitar Coach there?’ But we made it work. We did a lot of FaceTime talking about each solo. The craziest thing was the amps I’d been using were now at his house. So I basically recorded my solos through Guitar Rig and sent him the DI’d recording. Then he re-amped them with his Bogner and Matchless. We both thought, Yeah, this’ll work, it will be just like I’m sitting there playing! Well, that is not the case. Poor Dann had to go through seven hours one day, just working out how to get the DI to sound like we’d got earlier. I’m not going to say what’s what: but I don’t think you can tell which solos and licks are recorded with me in the studio, and those which are me in my little room and the amps are at Dann’s. It was, for sure, an ‘interesting’ process.”

Is that home studio of yours where you’ve been doing your Living wEll YouTube videos (where Lindsay speaks to other Nashville artists who were in lockdown)?

“It sure is! It’s not a big space, and it doesn’t have is any meaningful sound-proofing. So I had to improvise. I brought my spare mattress into the studio: that’s like foam, right, that’ll absorb any unwanted reverberation on vocals? So I ended up recording a lot of vocals for this record singing right up next to a dragged-in mattress. Very glamorous!”

It sounds like it’s all been a huge, unexpected learning process?

“It was. The whole COVID thing and the racial crisis going on it feels like 2020 is really a year for us all to re-evaluate our priorities. I seems insignificant to even complain that recording my album was a bit tricky. But even from my own tiny perspective, I feel positive. I think 2020 is teaching us lots of things: how to slow down a little, how to prioritise things, how to do our jobs more efficiently.”

“Like, I was talking with my office teams the other day all over – Nashville, LA, London, Australia, all in one day on Zoom. Now, we could have done that easily before but for some reason we never did. We were just sending emails that took ages to answer! Now, weirdly, I feel more connected to my teams than ever. Who knew it would take the world getting a little sick for us to feel some of these things?” 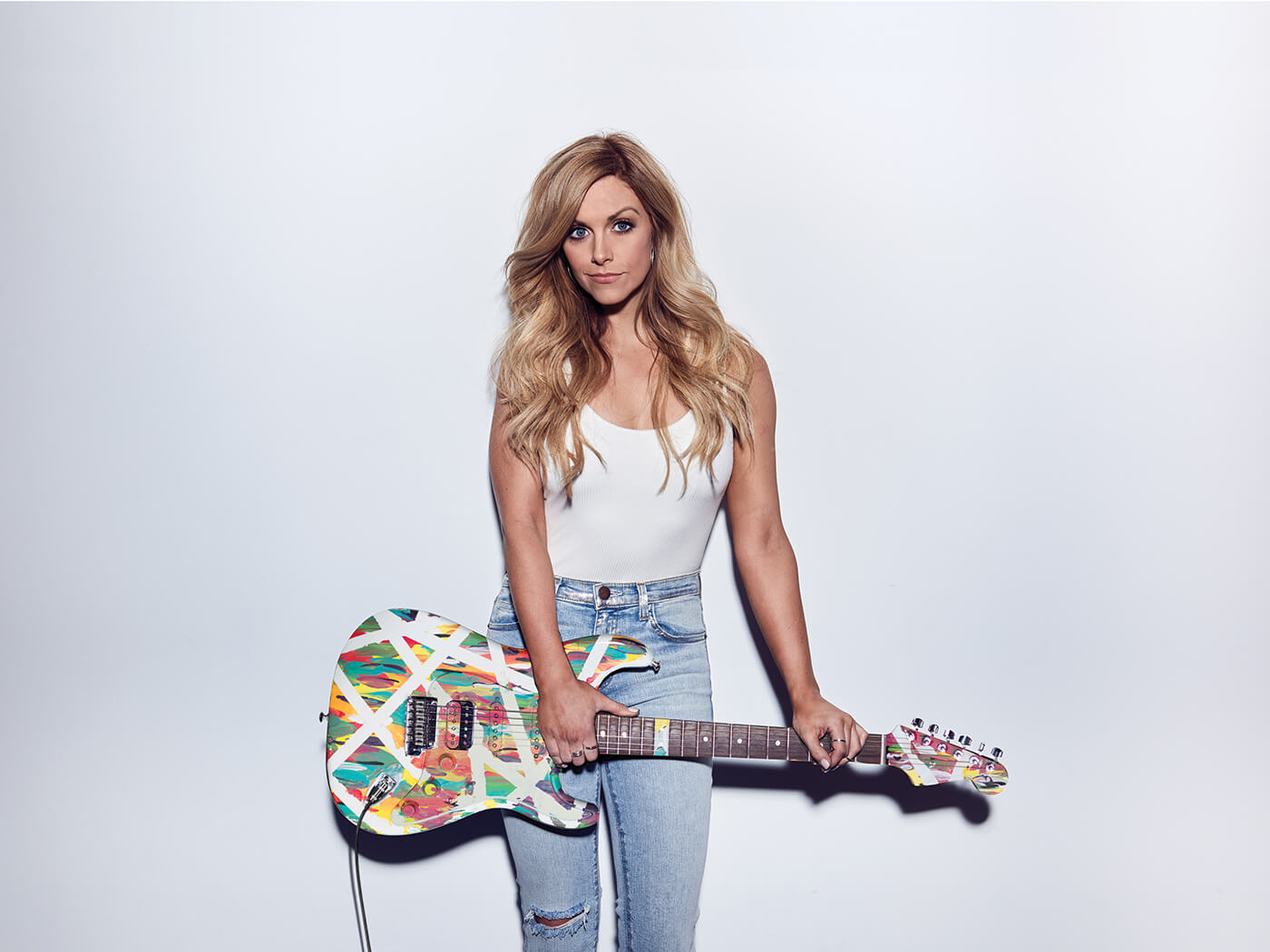 You’re an incessant tourer, though: you must have missed that?

“Oh, the most. We’ve done some live internet shows and fun though they are, they’re not the same. I was out on tour for 280 days last year, and playing live is what I love more than anything, so I’m just having to be patient for that to return…

“But I’ve had so much more time, that’s been amazing. If anything, quarantine has felt really busy. There’s been a lot of guitar practice instead of shows… but I could always do with more, let’s be real!”

Heart Theory is out now on Stoney Creek Records.

Although she sits broadly in a ‘new country’ landscape, Lindsay’s five early inspirations are all rooted in the blues.

“Randy Bachman used to play me Jimi Hendrix records all the time… he was also really into Lenny Breau and jazz guys like that. And although I knew about Hendrix back then, I’d never really listened to him properly and when I did – and I still do – he just amazes me. His playing is so inventive, his chords extraordinary, it still sounds out of this world. If I’m in a self-inflicted box, playing wise, listening to Jimi Hendrix will take me somewhere else.”

“I really love Eric’s phrasing, in particular his vibrato. When I started really soloing, some people said to me: ‘Oh, you play your vibrato like Clapton’. I was like: Do I? But they’re right. That way of taking your thumb off the back of the neck and having your fretting finger pivot… I can’t actually play vibrato any other way, but I guess I learned that from Clapton.”

“The perfect example of how the guitar can be like an extension of your body, to me. He was such a physical player at times with that picking action, yet he could then ease back into the most delicate of phrases too. I still watch his videos a lot.”

“What a sound. Some of his solos literally reduce me to tears. I love the idea of a guitar solo being lyrics to a song that aren’t written, and if there’s one player I could listen to all day and feel inspired by, it’s Derek Trucks.”

“There’s any number of people like Buddy Guy, Duane Allman and so on I could chose… But I’m going to include a woman and it’s Bonnie Raitt. Her slide playing is fantastic, obviously, but I also love how she just commands the stage. I Can’t Make You Love Me is my favourite song of all time too… if I can get anywhere near having the impact and command of Bonnie Raitt, I’m definitely going in the right direction.”