“The guitars are the focal point of the songs”: Los Bitchos’ Serra Petale on reinventing instrumental guitar music for a new generation

Working with Franz Ferdinand’s Alex Kapranos helped the band hone their Anatolian surf sound, resulting in one of the best debut albums this year.

“Capturing the essence of each track made me more mindful of what I was playing,” Serra Petale says of recording as a live band for Los Bitchos’ first album proper, Let The Festivities Begin!.

Regarded as one of the most exciting new live bands in the UK, the London-based quartet are quietly removing the pomposity that can come with instrumental music, replacing it with guile and enthusiasm.

Indeed, Petale’s relationship with her guitar is undeniably inspiring. Mainly using an Italia Maranello Speedster throughout the recording process, Petale ensured that her playing become more considered and mindful, only using effects that were necessary to the song, rather than simply “sticking on an overdrive and hoping for the best,” as she puts it.

Inspired by a Peruvian Cumbia compilation album that kickstarted the project, the band have written a joyous LP, filled with Van Halen inspired melodies and swift turns into 70s Anatolian interludes. A maximalist record that was recorded before the pandemic, it is the perfect tonic for post-pandemic life. 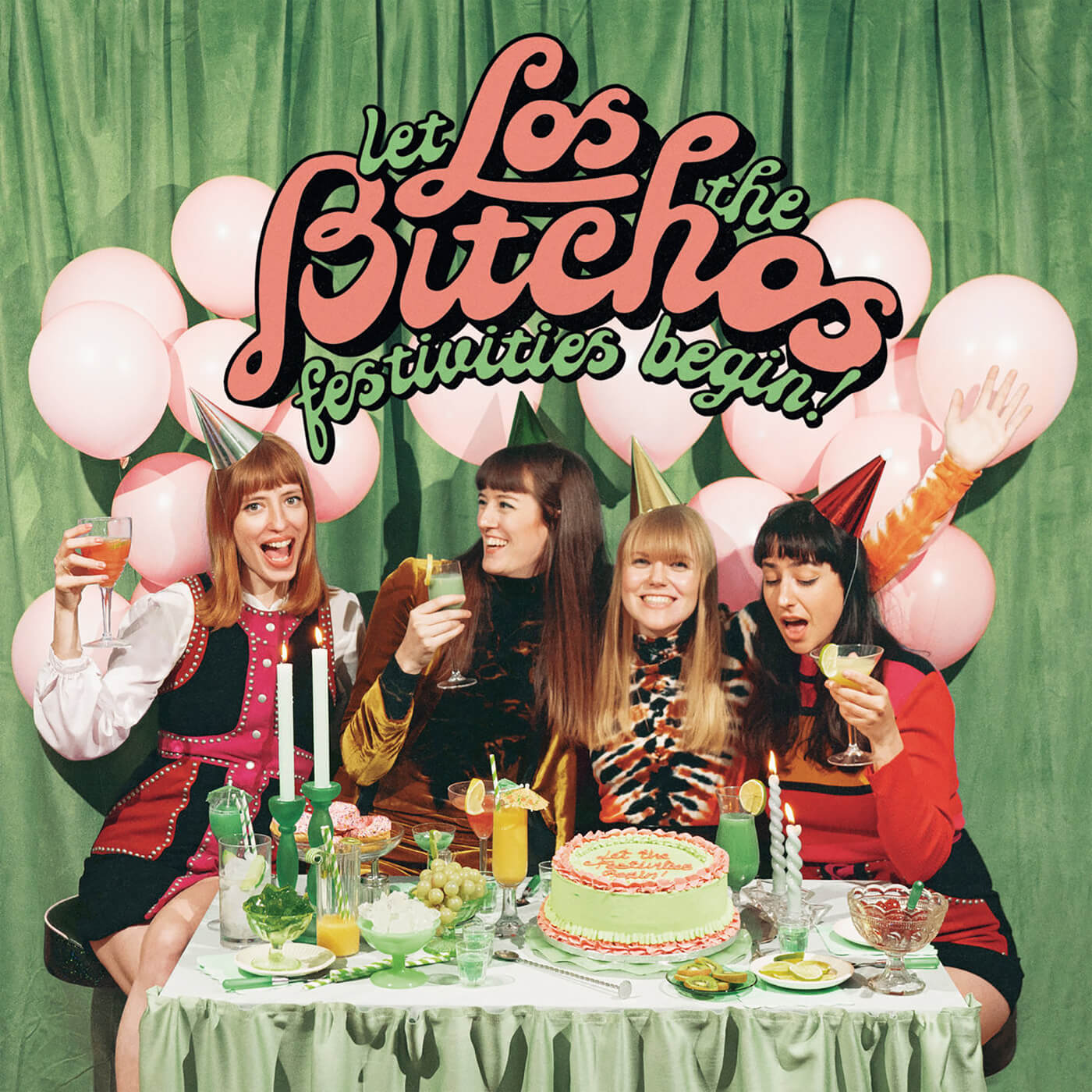 Franz Ferdinand’s Alex Kapranos produced this record at Gallery Studios (owned by Phil Manzanera of Roxy Music). What was it like working with such an indie stalwart?

“Working with Alex was awesome. Not only does he have an incredible amount of knowledge about production, songwriting and gear; he really put so much of himself into this record. He really took the time to think about how to bring out the best in each song, how to utilise his amazing array of gear to produce uncanny sounds and he was never afraid to experiment. The time and the love he put in with us has truly made this a magical record and we couldn’t be happier.

“Recording at Gallery Studios was certainly a step up. It was actually our first time recording all together in the studio where we were tracking everything live, apart from a few percussion and guitar overdubs we completed later on in the year. Having all that amazing gear to work with allowed us to get the best sound we could get as well as being able to add a few twists here and there. Getting to use Phil Manzanera’s own custom pedal board was a fine example of this, there’s a really stand out moment in Pista (Fresh Start) where we put the guitar through this phaser-fuzz-distortion setting and it sounds absolutely amazing, one of my favourite moments on the album.”

Pista (Fresh Start) is a song your fans will recognise and has been reimagined for your debut LP. Why did you choose to reapproach this song for the album?

“We started recording the album way back in 2020 and of course during the years so many of the songs have developed and morphed into what they are now. Making things sound fresh and as strong as they can be was so pivotal for us and we think Pista (Fresh Start) is a perfect example of that. It represents where we are now musically as a band, and we are so proud of how it turned out.”

You’re a band that’s revered for your energetic and engaging live performances. Was it difficult to ensure that came across on the LP?

“That was one of the first things we mentioned when we were having our first meetings with Alex prior to recording. Tracking the album all together was a big part of that as we could feed off each other’s energy and really lock into each other’s groove. We were so lucky that Gallery Studios had the space to accommodate having all of us in the same room, including Alex and our engineer Javier Weyler, and some of our friends that would come to visit during the sessions. Once we were set up and ready to go, we didn’t really give it a second thought. There were many moments of spontaneity that added to this as well, like strapping shakers to our friend Kika’s body and getting her to dance along to some tracks, recording some bum slaps for Las Panteras, doing our little yells here and there. We put as much of ourselves on to this record as we could. We just did what we did and had the best time doing it.”

What first drew you to instrumental guitar music?

“It’s always been on my radar somewhat as my parents were big fans of The Shadows when I was growing up, and a lot of the Turkish music I would listen to as a teenager was instrumental. The album Roots of Chicha, which is a compilation of Peruvian Cumbia, was what really kicked this project into gear. The production and songwriting across that album is simple, sublime and so beautiful. There are sparse vocals here and there, but the fact that the guitars are the focal point of the songs and carry the lead melodies in such an emotional way was so inspiring. It just made me think, I want to do this!”

Your band has a plethora of influences, from Peruvian chicha to Tarantino-esque surf. How do you find a balance without it sounding like a ‘too-many-cooks’ situation?

“There can be such a temptation to stick on layer after layer of percussion, more guitar licks, extra guitars, etc. The mixing process is such a good time to really analyse each track and think, does it really need this? Does this part make us want to hear it again, or does it really give it lift? Alex was brilliant at this, as he could come in with fresh ears and made us really consider these questions. We had a solid idea of what we wanted from each track before and of course in the studio there were so many moments of spontaneity which made the recording process so fun.”

How has your approach to guitar playing developed on your debut album? You’ve mentioned wanting to sound like Anatolian Van Halen meets Cocteau Twins!

“One key thing that Alex mentioned in reference to this was, play like your notes are in the song, rather than just laying the guitar on top and comping it a bit here and there. Really locking into the groove with the bass and drums and capturing the essence of each track made me so much more mindful of what I was playing and how I was playing it. Sitting back afterwards and listening to how a certain guitar performance would make you feel was such a good way to analyse what the guitar was really bringing to the table, and if the feeling wasn’t right, we would do it again till it was. I will always stand by that quote of Anatolian Van Halen meets Cocteau Twins.”

“Eddie Van Halen’s playing spurs me on to push my playing as much as he did and those early Van Halen records are outstanding, the groove of the bass and drums combined with Eddie’s out of control guitarmanship are something any musician would strive to, it was ground-breaking stuff. The Cocteau Twins have that ethereal wall of sound production that is second to none and just gives me goosebumps. I feel the same about my favourite Turkish records. The rhythms, the melodies, the different instruments they use are just sublime and so inspiring, they make you feel like you’re somewhere else. That’s what I want the listeners to feel when they hear our record.”

Can you tell us about your main guitar and pedal setup, and how it was influenced or changed by the recording process?

“The main guitar I’m using at the moment is an Italia Maranello Speedster. I remember seeing it in a small guitar shop in Nottingham, UK and I fell in love with it straightaway. It was one of those guitars that didn’t need any extra setting up, it felt good to play straight off the bat. I’d of course like to give a shout out to my other guitars; Eastwood Ichiban K2-L, Lâg Jet New Vintage JV100, Fender Blacktop Stratocaster.

“My pedal setup consists of a Korg Pitchblack tuner (so simple and so good), an EHX Nano Clone chorus, SD-1, Mooer Micro Series Pure Octave pedal and a Big Muff.

“During the recording process we used so many different pedals and effects that would definitely not fit on my pedal board. My favourite being this old Binson Echorec our producer Alex had, it sounded amazing. It was so interesting to see what sounds we could get out of the guitar and where it could transport the songs. I’d say the whole experience made me more mindful of when to use my fx during various songs, rather than just sticking on an overdrive and hoping for the best. Picking and choosing your moments to bring sounds in and out only makes it more interesting for the listener and for the player as well.”

In your opinion, what’s the best song on Let The Festivities Begin!?

“Try The Circle! I love the weird proggy feel of this song. I wrote this song a few years ago when I was stuck at home in London due to a heavy snowstorm. It came together in a matter of days and became one of our favourite tracks to play live. There’s no other track like it on the album, but it still encompasses a magical chaos of Latin percussion and synths, with a driving force of bass and kraut drums. Those elements provide a perfect bed for me to shred my little heart out and have an absolute blast.”

Let The Festivities Begin! is out February 4 on City Slang Records.