“You can’t go in too hard; that’s not possible, not in metal” Robb Flynn on going scorched earth on his critics, and Machine Head’s brutal new record

The guitarist on his battle-scarred Flying V, his love of Tony Iommi, and why you’re probably playing his riffs wrong. 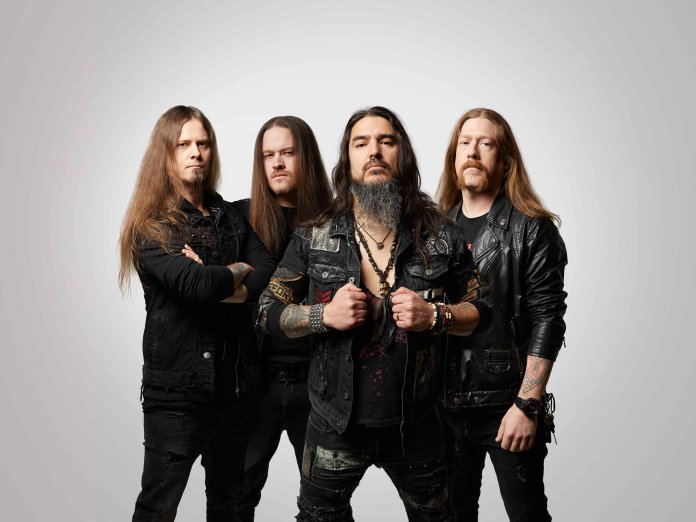 Robb Flynn wants you to know that you’re fucking up his riffs. “People always get the harmonics wrong,” the Machine Head leader laughs, speaking from his home studio in Oakland, California. “We play them in a higher place than usual. You’ve got to go to the fourth string, not just the second or third string. It’s harder to play, but it just rings clearer.”

You’d best listen to what he says. Since Machine Head exploded to prominence with debut album Burn My Eyes, Robb’s been the master of pinched harmonics. Stick on Davidian or None But My Own and you’ll hear his guitar squealing its way through, using high-pitch shrieks to slice in between the heftiest of chord-driven groove metal riffs. It’s a muscularity inspired equally by Black Sabbath and DRI – and something such apoplectic music never seen before.

“I grew up on Tony Iommi, and Tony has that slur: that slow hand,” Robb continues, explaining the source of his beefy power chords. “It’s totally different from metal. In metal, everything is precise, but Tony wobbles and bends. That was a huge part of my guitar playing. Then there’s punk rock. On Dealing with It, DRI would go, ‘In my bed! Crashed out!’, then eeeeeee! The feedback would happen, but I didn’t know shit! I mistakenly thought feedback was a pinch harmonic.”

When it dropped in August 1994, Burn My Eyes was an instant hit. It was the best-selling debut album in Roadrunner Records history, and held that accolade until a ragtag gang called Slipknot came along five years later. Those raging riffs combined with timely roars about religion, gun violence and the 1992 LA riots struck a chord (pun intended) with the heavy metal masses and beyond. It was the perfect meeting point between the aural extremity of thrash, then on its last legs, and the impending social angst of nu metal.

In almost every way you can imagine, the Machine Head of 2022 is different from the corn-row-loving aggressors that shook the 1990s. Robb is the only one left; Logan Mader, Chris Kontos and Adam Duce have been replaced by Wacław “Vogg” Kieltyka, Matt Alston and Jared MacEachern on second guitar, drums and bass respectively. And, musically, they’ve had arguably the highest peaks and deepest valleys of any metal band of their vintage.

Burn My Eyes was followed in 1997 by The More Things Change…, which doubled down on the pissed-off groove metal of its predecessor. It was awesome. Then came The Burning Red and Supercharger, which took a left turn into rap metal so violently that Machine Head’s wheels fell off. Through The Ashes of Empires proved a return to savage form, setting up the acclaimed progressive thrash trilogy of The Blackening, Unto the Locust and Bloodstone and Diamonds.

Catharsis came next in 2018 and would be perhaps the most divisive record in the band’s history, ditching extreme metal and tapping hip-hop and folk-punk for inspiration. Fans were fuming, barraging Machine Head’s social media with furious comments and dislikes.

Guitarist Phil Demmel and drummer Dave McClain left the band in the immediate fallout, with the former even lambasting Catharsis as a Flynn solo album in a later interview. However, the mastermind is eager to downplay the vitriol that was flung his way.

“I’m proud of every record we’ve ever done, and I’m proud of that record,” Robb says when asked about his current thoughts on Catharsis. “There were haters inside and outside the metal community on a lot of our records. There were haters on Burn My Eyes! I can find fault in any album that we put out, but the fans loved it, the shows were sold out and amazing, and I’m excited about the future and proud of our past.” 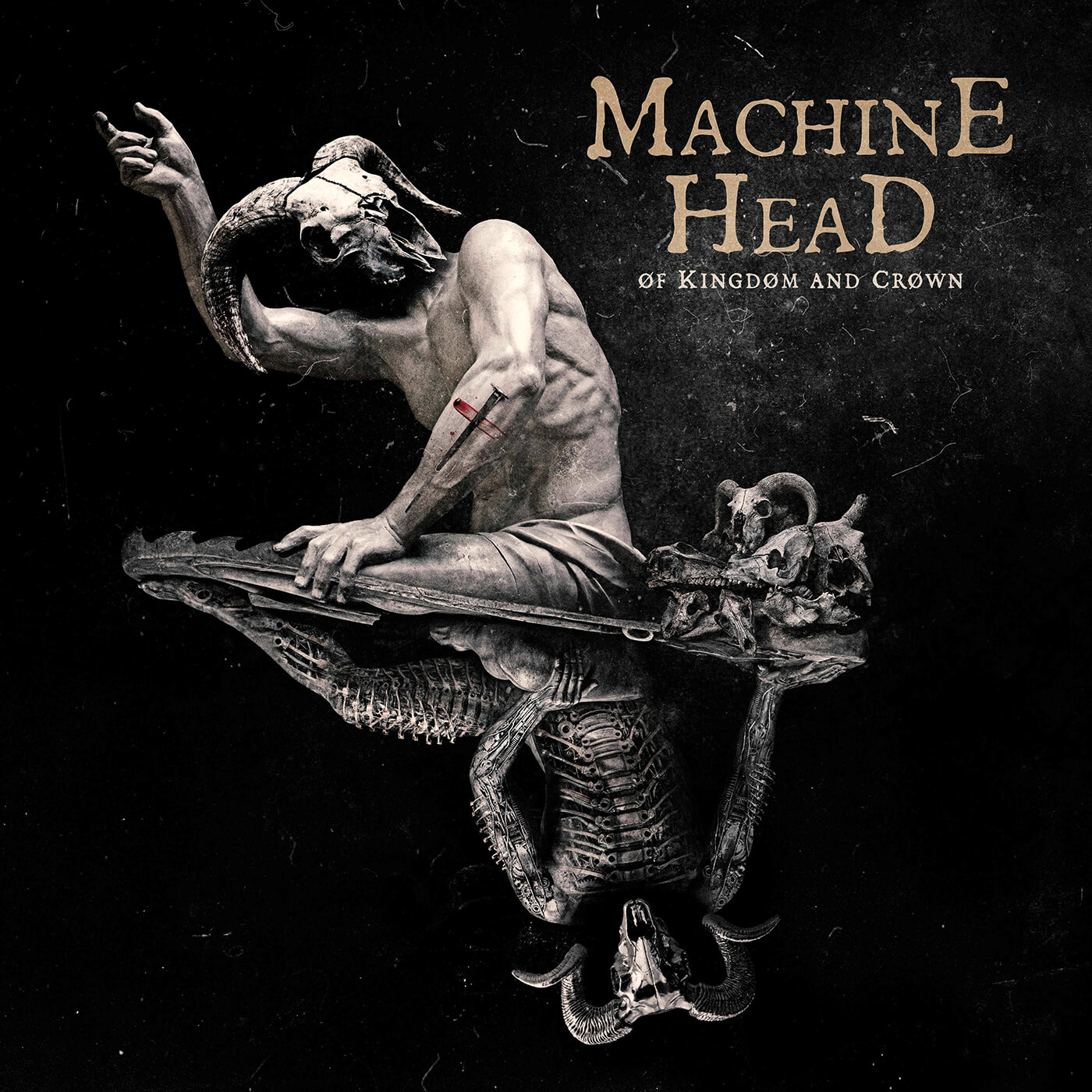 Clearly, Robb’s adopting a more positive outlook than he had three years ago. Talking to Metal Hammer in 2019, he said that he “was America’s punching bag for nine months from when the first song from Catharsis dropped”. That same year, he clapped back against his own audience with a standalone single called Do or Die. “Ignore the hate, it’s do or die, motherfucker! Die, motherfucker!” its chorus snarls, while its verses rap: “I don’t give a fuck about your stupid little scene, reaction videos and all your pussy little memes.”

It went down about as well as you’d expect. “Nice of Robb to give that Make-a-Wish kid the opportunity to write lyrics for a song,” the music video’s highest-rated YouTube comment states, with 1,200 likes supporting it. In hindsight, did Robb go in too hard?

“Is that a thing?” he replies, perplexed. “Going in too hard in metal? You can’t go in too hard; that’s not possible, not in metal.”

He continues: “You might have heard me talking about [online hatred] in Do or Die, but you’ll never hear me talking about it in an interview. There’s a reason for that: because there’s no winning. You make a mountain out of a molehill by addressing it and they win.” 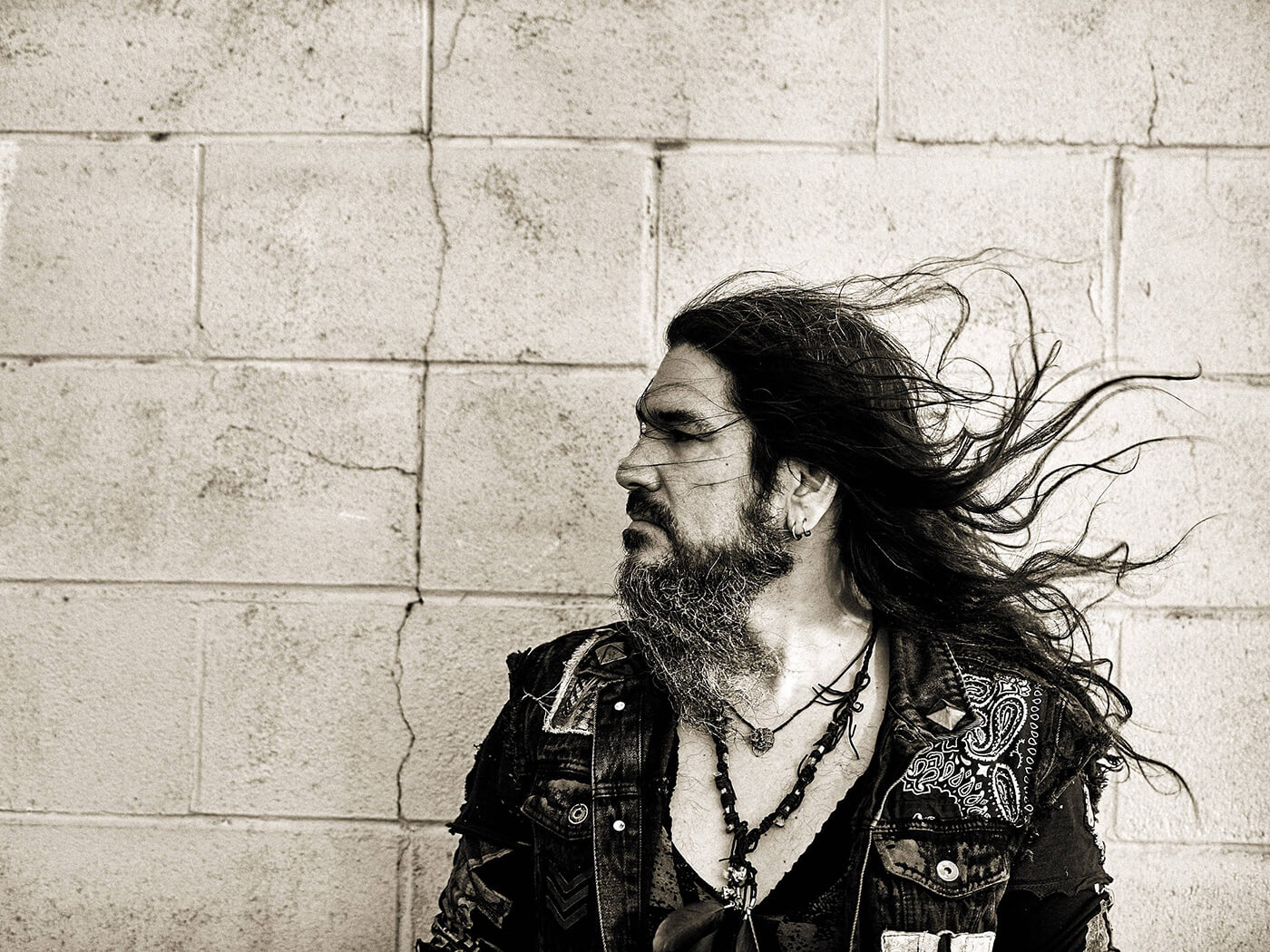 Robb’s taking a break from reality this time around. Machine Head’s brand new album, Of Kingdom and Crown, isn’t about social media trolls or a war with your own fanbase. Instead, it’s the band’s first concept album. The two intertwining narratives follow characters Ares and Eros. After the love of Ares’ life dies, he goes on a killing spree.

Meanwhile, Eros becomes similarly murderous after losing his mother to a drug overdose. For Robb, it’s a story with no protagonist or antagonist: something that came to him during the pandemic.

“My kids randomly started watching anime,” he explains. “They started watching Attack on Titan. I’d just go in to check on them and see what they’re doing, and it’s brutal! It’s fucking sick! So we started watching it together as a family. Somewhere along that story arc, you realise there is no good guy or bad guy. Both sides believe they’re doing good but are committing atrocities. I think that’s when the album really started coming together; it took on a whole different vibe.”

Probably to the joy of many, the vibe of Of Kingdom and Crown is the polar opposite to Catharsis. It’s a ferocious and, at times, progressive thrash metal attack. Opening giant Slaughter the Martyr evokes Clenching the Fists of Dissent – the ten-minute first chapter of The Blackening – in its scope and remorselessly gritty riffing. The subsequent Choke on the Ashes of Your Hate is a more concise kick to the balls, screaming incessantly. However, there are also bleak entries like My Hands Are Empty: a moody and melodic tangent that still ascends to godhood thanks to bassist Jared’s infectious vocal refrains. Easily, it’s MH’s finest moment since The Blackening came out. 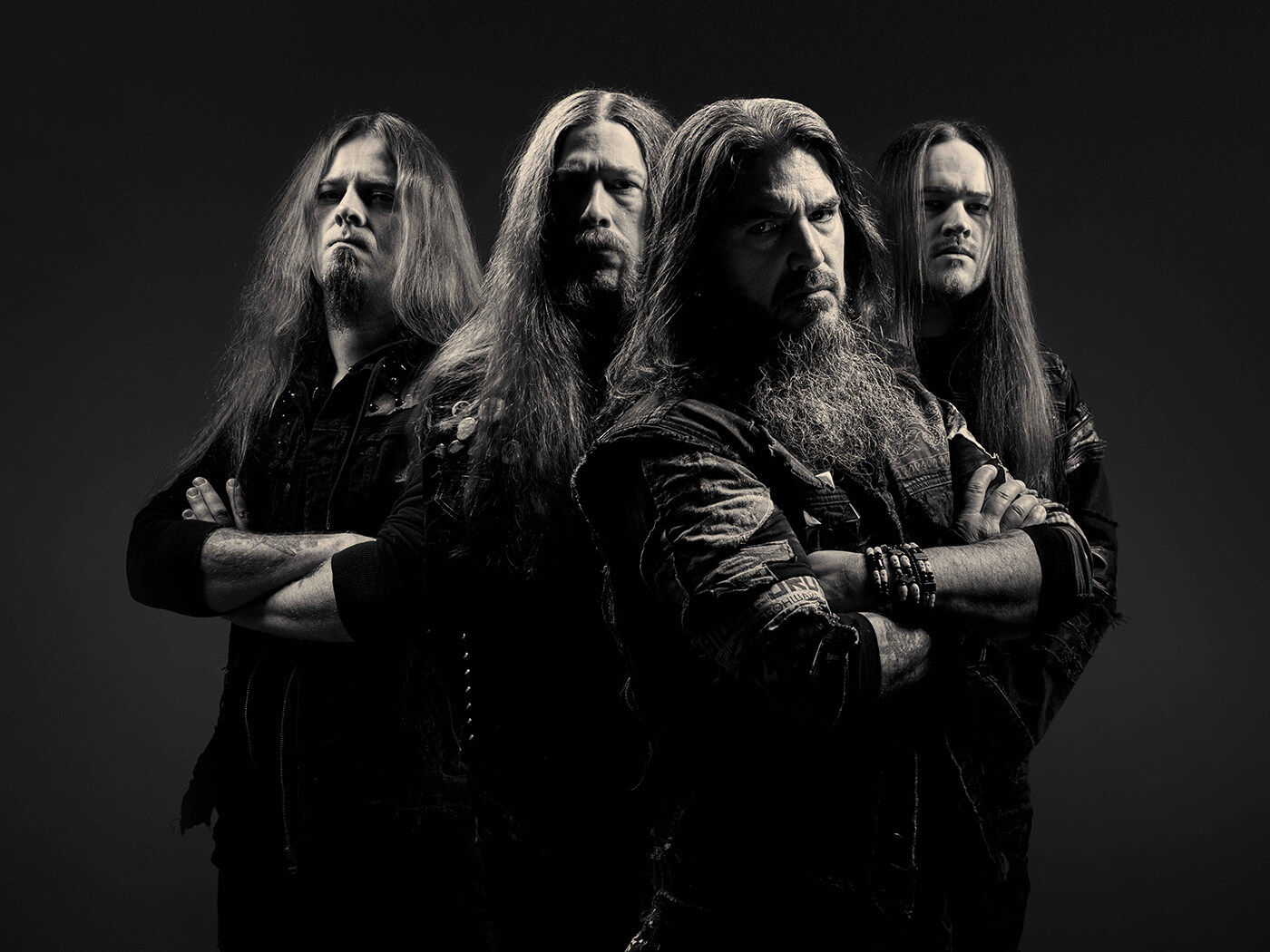 When recording, Robb used his signature black-and-white Epiphone Flying V model, called the Love/Death. “It’s not flashy at all,” the frontman admits, “but there’s something about this guitar that’s just so goddamn heavy. It’s got something that other guitars don’t, so I always use it – even though it’s beat to shit. It’s had vodka poured over it. At this point, the thing’s alive.”

Fellow player Vogg makes his Machine Head debut on Of Kingdom and Crown. It’s an appointment that’s been met with controversy since, in September 2017, every member of Vogg’s own band Decapitated was arrested, accused of raping a fan on the band’s tour bus. The following January, the charges were dropped – albeit without prejudice, meaning that the band could still be prosecuted in the future – citing “the wellbeing of the victim”.

As much as Robb gushes over his new colleague’s talents (especially a “fucking savage” picking hand), he’s aware of Vogg’s past and claims to have dealt with the issue internally to his satisfaction.

“It happened a year or two before Vogg joined the band,” he says. “I brought it up with him and discussed it. After what he said, I feel like he’s a good dude. He’s got a wife and kids.”

That said, Robb insists that he didn’t get the backlash you might expect given the criticism he’s experienced in the past. “When we announced Vogg being in the band, people were like: ‘Holy fucking shit! That’s sick!’ It was overwhelming. My phone blew the fuck up! So many of my friends were like, ‘Sick choice, dude!’”

Despite the controversy that seems to follow him around one way or another, Robb is clearly a man happy with his lot. He’s happy with his Machine Head comrades. He’s happy with the music. And he’s happy he’ll be back on the road soon, touring Europe with Amon Amarth. But – three years, one new lineup and one blistering album later – does he still feel like America’s punching bag?

“I’ve lived in the public eye since I was eighteen years old, and even back then I had haters,” he answers. “You just ignore it and do your own thing. You can let out a clap back here and there, but just plant your flag and stick by it. This is what I believe in. This is the music I make. Fuck you if you don’t like it.”

Of Kingdom and Crown is out now via Imperium and Nuclear Blast.