Maker’s Marks: How a mysterious phone call led to the discovery of Ray Butts’ pickup-tester guitar

In the first part of a new series, we find out how a stolen Gretsch helped unearth the legacy of guitar luminary Ray Butts.

The story of the electric guitar is not just one of players, it’s one of tinkerers, engineers and inventors, huddled day after day in their workshops, garages and basements. It’s these trailblazers that have truly shaped the instrument, from the formative stages of its development to ongoing refinements today.

Though his story has never been as explicitly told or thoroughly understood as those of ‘Mount Rushmore’ figures such as Leo Fender and Les Paul, Ray Butts is one of the most important of the electric guitar’s revolutionary pioneers. It took a remarkable turn of events to shed further light on his work, revealing previously unknown details about the early development of pickups and the electric guitar itself.

It’s a peculiar yarn, whose players include Paul Bigsby, Ted McCarty, Chet Atkins, Fred Gretsch and Seth Lover. But it’s also a story about the innovations of today and the future of the instrument, centring around one of the most celebrated tinkerers of our own time, Thomas Vincent ‘TV’ Jones. It’s best told through a series of objects, all belonging to Butts – and, like all great tales, it begins with a mysterious telephone call. 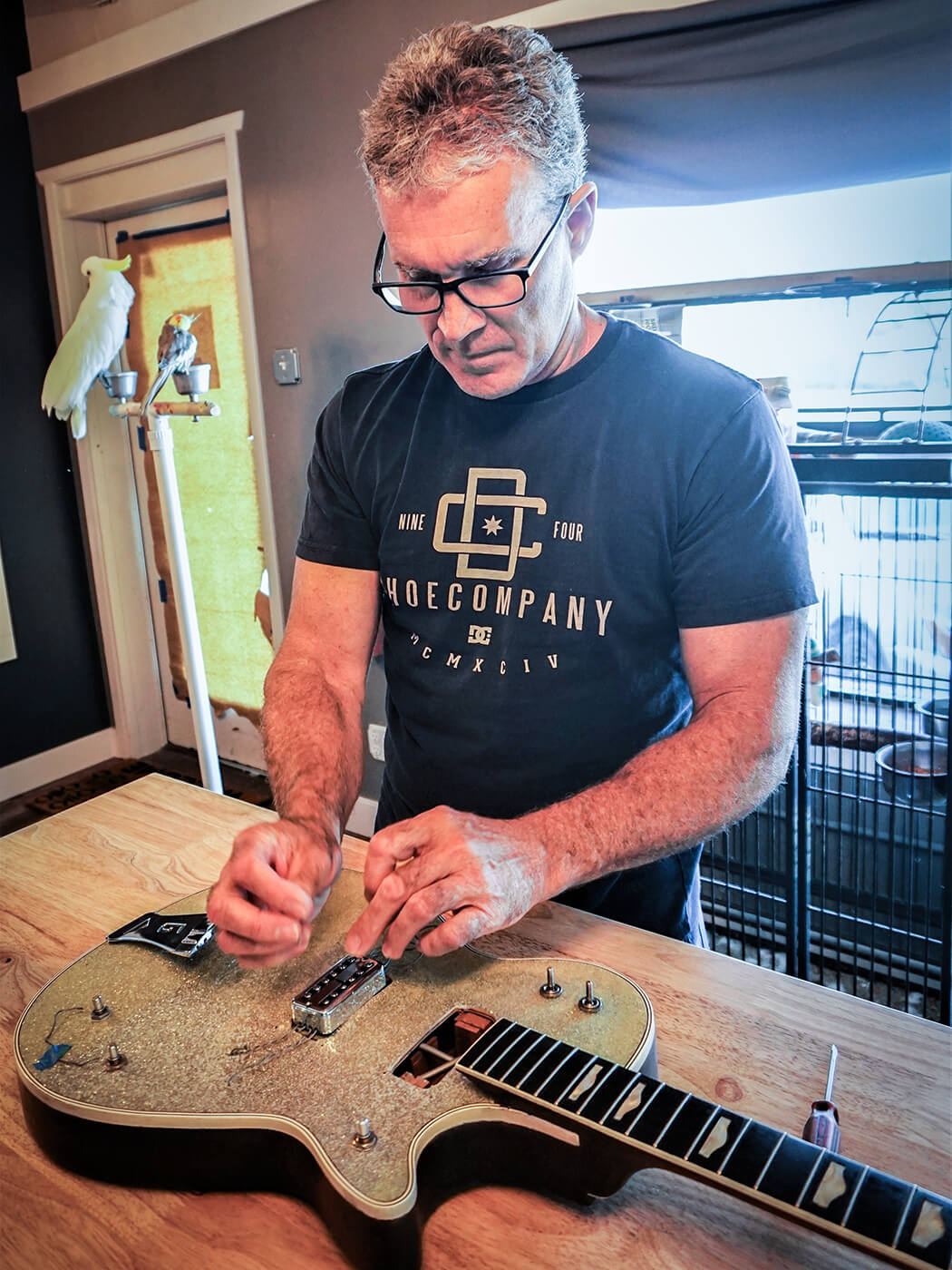 Tom’s phone rang in 2009. Someone had got their hands on a vintage Gretsch and they were looking for advice on pickups for it. Tom had been offering aftermarket Filter’Tron pickups for years and was working with Gretsch on several projects at the time, so it made sense that the caller turned to him for guidance.

In order to suggest some pickups, Tom needed more information. As he began asking questions, he realised that there was something curious about this guitar. It started to sound familiar. On a hunch, he picked up Tony Bacon and Paul Day’s The Gretsch Book and flipped through the pages. Sure enough, there it was: Ray Butts’ pickup-tester guitar.

Wanting to investigate further, Tom called Paul Yandell. Paul had played professionally for many years, most notably with Chet Atkins, who he accompanied for more than two decades. When it came to Gretsch and Ray Butts, Paul knew his stuff – and he agreed: it sounded like this was the guitar.

Sadly, Ray had passed away in 2003, so Paul instead got in touch with Ray’s children – his son Randy and his daughter, Katha House. “Paul called Randy and Randy called me and said, ‘I think they’ve found dad’s Silver Jet,’” Katha recalls.

What Tom didn’t know at the time was that Ray Butts’ Silver Jet pickup-tester guitar, as pictured in The Gretsch Book, had been stolen. “I had no idea it was missing,” says Tom. “I just realised it was the one from the book, wondered why this guy on the phone had it and called Paul.”

Paul connected Katha and Randy to Tom. “I put Katha in touch with the guy who had the guitar,” says Tom, “then I stayed out. I figured it was their business and not mine.”

Along with several other guitars, Ray Butts’ Jet had been swiped in a house burglary in 2000. “We got a few of them back, actually” Katha remembers, although she’d assumed the Silver Jet was gone for good.

Things seemed like they’d be straightforward when Katha called the guy in possession of the guitar. He was happy to hand it over if he could get back what he’d paid for it – but then he called back. “It could only have been about an hour later,” says Katha. “He claimed to have developed ‘an emotional attachment’ to the guitar and said he wanted a lot more money for it.” Between the first call and the second, he’d realised how much the Silver Jet was worth. That’s when Katha got the police involved.

Speaking with the sheriff’s office in Greenup, Kentucky, Katha explained the situation, including the police report from the 2000 theft. It hadn’t been 30 minutes before she got a call back, this time from a Deputy Darrell McCarty. “Ma’am,” she remembers a strong Kentucky-accented voice saying down the line, “I’m sitting here in my car with my deputy. His name’s Larry Pancake. We’re at this address you gave us and, let me tell you, it ain’t the best part of town. You describe this guitar to us and we’ll go in and see if we can get it.” 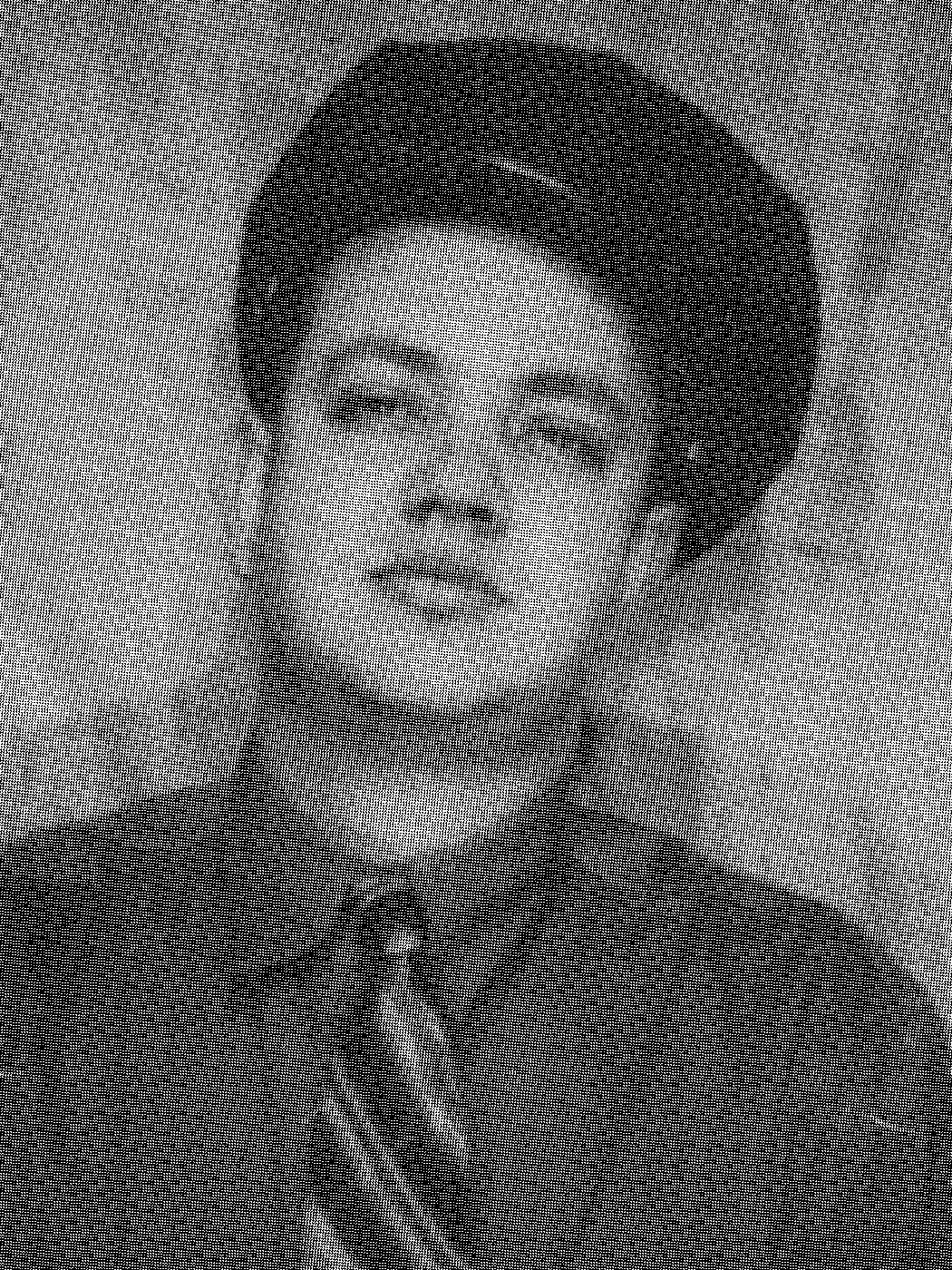 Deputies McCarty and Pancake prevailed. Once the police were in possession of the Silver Jet, Katha and Randy travelled to Kentucky to collect it. By the time they arrived, the local media had got ahold of the story and a camera crew was there to interview them for the evening news.

But that’s not where this story ends. Katha and Randy’s journey home after collecting the guitar just so happened to overlap with a CAAS (Chet Atkins Appreciation Society) show. “There are no coincidences,” says Katha. “It was meant to be – and it was meant to be during CAAS.”

They took the Silver Jet in and were quickly swamped. “That guitar became the star of the show,” Katha recalls. Everyone from fans of Ray Butts’ work and Gretsch enthusiasts to Fred Gretsch himself came over to examine and get their picture taken with Ray’s pickup-tester Jet.

It was because the recovery of the guitar coincided with the CAAS show that Katha and Randy finally got to meet Tom, who was in attendance. “When my dad was alive, we used to go with him to CAAS,” says Katha, “so we’d been introduced to Tom briefly. But I was always just Ray’s daughter, so I’d only said hello to people like him.”

Tom asked to inspect the Jet’s pickup and, meeting him properly for the first time, Katha was struck by his appreciation of her dad’s work. “He had an enthusiasm that you can’t disguise and you can’t make up,” she enthuses. “You see it in his eyes and you hear it in his voice: he has a passion for dad’s work. I picked up on it immediately.” Getting to know Ray’s family and looking over his pickups made an impact on Tom, too: “When I got to inspect the guitar at CAAS, I got goosebumps.”

Their serendipitous meeting also brought about something bigger. Katha and Tom stayed in touch, and she continued to be impressed by his approach to Ray’s work. “Tom’s honest,” she says. “He’s like dad. He’s not interested in mass-producing things to make millions. There are huge companies that want to get ahold of dad’s original things and I just won’t give them up. But Tom’s in it for the quality; he’s like my dad. He’s more personal and that’s the way dad was.” 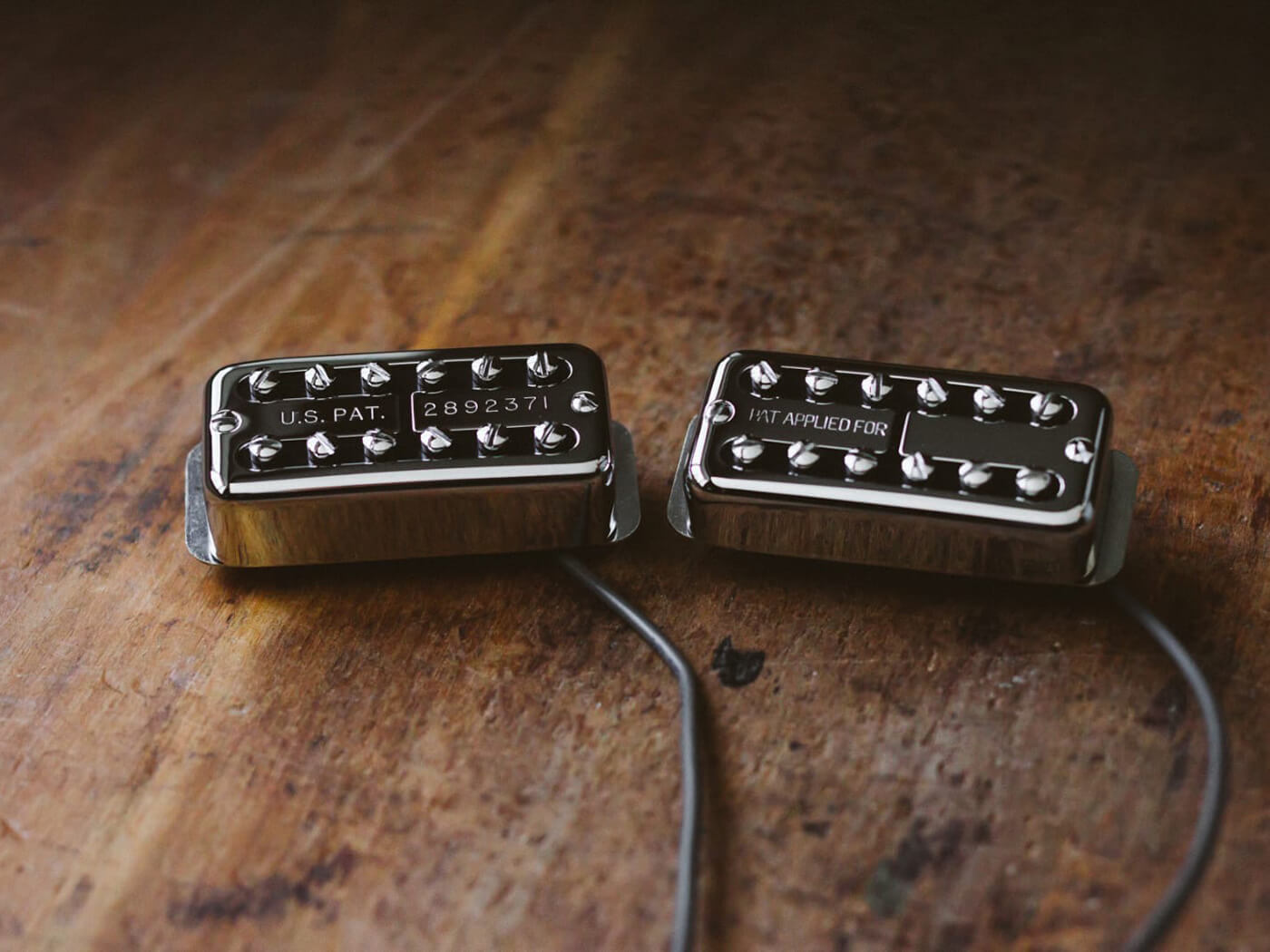 When Katha, a registered pilot, came across an old notebook full of pickup schematics in 2014, she called Tom: “I can read schematics of hydraulics and electrics for jets, but I’m not good on guitars. But, of course, Tom can read it, it’s what he does, so I asked him if we had anything here. He took a look and said yes.”

After making some prototypes from the diagrams, the distinctive sound and feel of the pickups was clear – as was Tom’s excitement. Katha trusted only him with the job of recreating her dad’s pickups, so they came to an agreement. Working to Ray’s original designs and with Katha’s blessing, TV Jones developed the Ray Butts Ful-Fidelity Filter’Tron (Ray’s original name) and released it in 2017.

Recreating such an authentic vintage tone was no small feat. “Any original Ray Butts pickup was completely sealed so that they couldn’t be reverse-engineered,” Katha reveals. Ray wasn’t a fan of mass manufacturing, and wanted to have control of the quality himself. He developed and progressed his designs ceaselessly to perfect them.

Bringing Ray’s Ful-Fidelity Filter’Tron to the world came from just a single notebook. Katha had boxes of Ray’s parts, designs, sketches and documents. “One day,” says Tom, “she just told me, ‘I want you to have it all.’ I was amazed.” 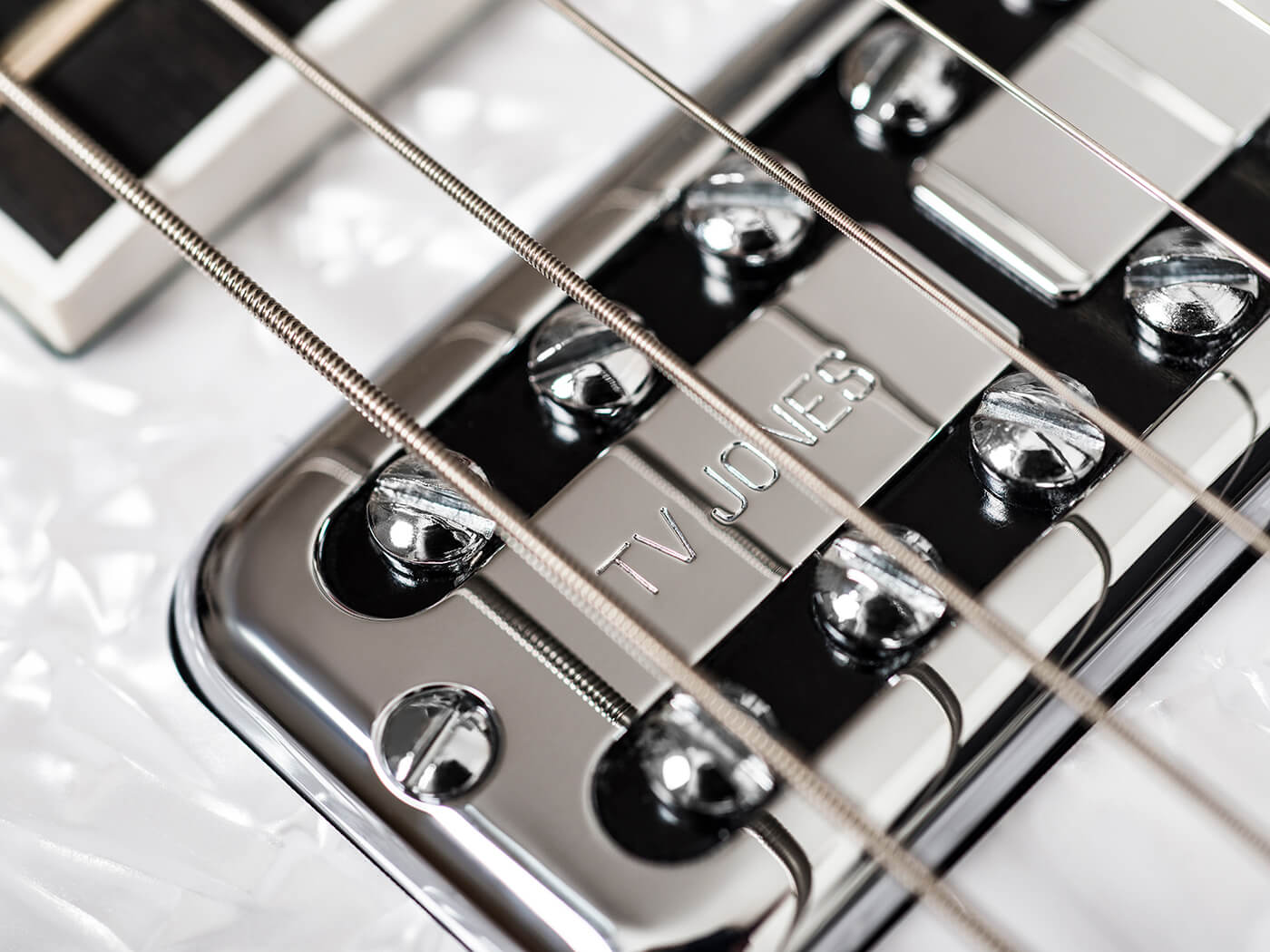 Tom and his wife drove out to Oregon, filled a trailer, and headed back to the TV Jones workshop with boxes upon boxes of Ray Butts’ parts, paperwork and more. It wasn’t long before he was diving into the amazing contents. “Ray did things in the 50s that I came up with in the 90s. I invented them but Ray had already done them. They’d just never seen the light of day. They were in these boxes.”

The differences between their approaches were as fascinating as the similarities. “We’ve changed a lot of things after getting to see more of Ray’s work,” says Tom. “We’ve changed alloys, winding techniques – subtle things that, when added up, make big changes.”

With Ray’s prototypes, unsealed originals and previously unseen developments to inspect, its no wonder TV Jones pickups are renowned as the most vintage-accurate Gretsch-style pickups in the world today, as well as some of the most inimitable modern ones.

As for the Silver Jet, Katha also gifted that to Tom and, upon closer inspection, it became even more fascinating. It bears small holes where Ray had attached a chipboard part for mounting and testing electronics, and there are extra holes around the pickup cavities that are hard to match with any rings or mounts.

The pickup cavities are a mystery too – as far as Tom can tell, they were originally routed for DeArmonds and then routed further (probably by Ray) to fit a Filter’Tron. As a tester guitar for an unremitting inventor, these modifications are hardly surprising but it’s an instrument full of mystery nonetheless; there’s no serial number, and parts of the construction seem anomalous.

Crouching over the guitar with a magnifying glass, The Gretsch Book open on the table to show the image of Ray’s testing board, rifling through schematics and doodles and parts, Tom attempts to figure it out, talking under his breath. “Where were those wires going? What was the battery for? What were you trying to do, Ray?”

The story certainly doesn’t end there. In the boxes from Katha are things that reveal much more about Ray Butts – and TV Jones. These are artefacts that tell their own stories about the early days of the electric guitar and the people involved in some of its most essential developments.

In the words of Jones himself, “It’s incredible. This is really, really important.”

Read more about Ray Butts in our exhaustive retrospective.