“This record was therapy for all of us”: Manchester Orchestra on the raw emotion at the heart of their new album

Guitarists Andy Hull and Robert McDowell on the Atlanta indie-rockers’ new album The Million Masks of God and rediscovering their love of “stinky riffs”.

For more than a decade, Manchester Orchestra have made music that paints with the brightest colours available. Their records are home to big emotions and towering thematic frameworks, with vivid hooks and thunderous power chords to match, yet the Atlanta band seek nuance and truth amid the bluster in a manner that escapes most modern rock bands. “Songwriting is a form of processing,” guitarist and vocalist Andy Hull observes. “I can grow and examine how I’m feeling, and I can work through things happening around me.”

Four years ago the group rounded a corner and found a stylistic reset waiting for them. Work on their fifth album, A Black Mile to the Surface, began with their usual tools spread out on the table. It was to be a concept piece, a complex patchwork quilt based around a small South Dakota town. But real life kept on interrupting the conversation. Hull began to think less of characters and more of his wife and daughter. Flesh and blood emotions, and reckonings with life and aging, entered the picture and were chewed up in the open maw of his oblique lyrical style.

To match this shifting slate of influences Manchester Orchestra erected an elaborate scaffold of instrumentation, blending the post-hardcore-derived slash and burn guitars of their early work with dense synthetic textures and winding, blink-and-you’ll-miss-them vocal switcheroos. It’s a tough act to follow. “We never bank on trying to do a similar thing,” Hull says.

The thick of a storm

On their new record the band pick up one of A Black Mile to the Surface’s dangling threads and confront the full stop that’s up ahead in the distance for all of us. Guitarist Robert McDowell (who’s also Hull’s brother-in-law) lost his father to cancer in 2019, and his death reverberates throughout the monumental The Million Masks of God. “It was a very delicate time for everybody,” Hull continues. “Rob was in the thick of a storm. We were making this record during that. We were cautious and careful.

“I didn’t want anything I was doing to feel like I was trying to exploit [the situation]. The last thing I wanted was for Rob to think I was trying to do that. I felt like I didn’t know if this was my story to tell. He was really gracious and encouraging to me, saying, ‘You experienced this too, I want people to tell me they’re struggling with this, because I’m struggling with it all the time.’”

The LP is loosely themed as a scrapbook drawn from a run-of-the-mill existence, with good, bad and indifferent given their respective chances in the spotlight. Reflecting the real-world implications of this sort of approach, though, it’s also fearful and all-consuming at times. Hull and McDowell are parents, and they’re aware that they’ll die—there is a particular melancholy found in that knowledge as your child grows up, and it’s hiding around every corner on The Million Masks of God.

“I am obsessed with that thought, and I am obsessed with the generational damage that can happen,” Hull says. “Stuff that happened so far back in your lineage that is still a part of who you are. You didn’t have a choice. What is our role in that? There are no answers. There’s no bow to wrap around it. But talking about it, exploring it, and living in those feelings, is healthy.

“It can’t overwhelm me. I think it would if I didn’t say it, and talk about it. On Black Mile… [parenthood] was this new, incredible thing and I felt such a weight of responsibility, but also this new lens on life where I saw things differently. My priorities changed. When we were faced with a tragic, slow process with Rob’s dad, it opened up the other side of that lens. There’s so much more to all of this than I thought.”

The fact that McDowell’s grief arrives with the listener through the prism of Hull’s voice says something of the complicated, complementary dynamic behind their creative relationship, which also spans the side project Bad Books – alongside Kevin Devine – and soundtrack work including the weirdo Daniel Radcliffe vehicle Swiss Army Man. 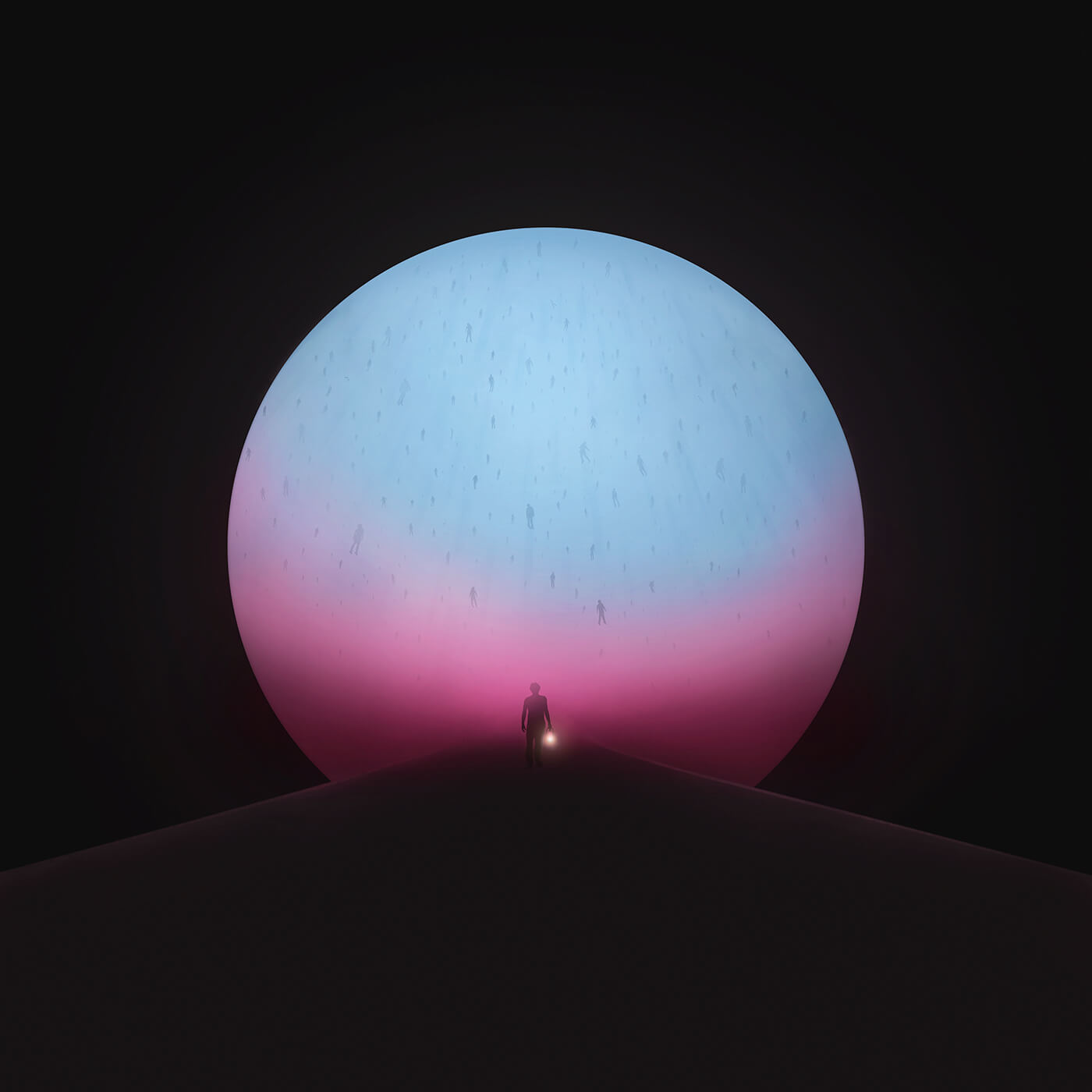 Most Manchester Orchestra songs begin with a kernel of an idea from Hull before being workshopped in a cabin in Asheville, North Carolina alongside the rest of the band, which is completed by the rhythm section of bassist Andy Prince and drummer Tim Very. Here, McDowell is a facilitator. He’s on hand with options and angles and avenues that might lead somewhere interesting. In Hull’s words he’s “more of a scenic painter.”

“It’s a back and forth of getting the song to the best version it can be as a full band song, as an acoustic song, and as every other type of song,” McDowell says. “It’s about presenting paths so that there’s a definitive answer: this is the absolute best way this song needs to be delivered. We’ve heard it every other way, and this is the most moving. Our biggest strength is that Andy and I are both willing to go there. We rely on each other as the only other person who’s going to go fucking insane doing this album.”

On The Million Masks of God, McDowell focused on his established role in much the same way Hull did: as a means of picking through the emotions that were washing up at his feet. “I was able to use the production, the arrangements,” he says. “I threw myself unhealthily into work. I’m thankful it was that and not drugs, alcohol. This record was therapy for all of us. If it can affect anyone’s journey in life, then that’s worth what we’ve gone through.”

Upping the ante from A Black Mile to the Surface, Manchester Orchestra dredged up some of the distorted heft that lit up past records. “We had used so little electric, chunky big guitar on the last record,” Hull notes, before deadpanning: “We felt a little more freedom to dig into some more stinky riffs.” Still, this isn’t some scattergun attempt to get heavy—every element is viewed in terms of its textural contribution to the whole.

“This album took a lot of editing,” McDowell says. “You throw paint against the wall and peel back the layers. Even in the initial process the guitars were very specific. We’ve done albums where the guitars took up all the space—we wanted to figure out how they work, if there can be a polyrhythm, if there can be tone differences, how they balance. We’re very much a band that underthinks guitars—I think it’s more important to get it while the emotion is there. We reach for the closest guitar and if we can plug it in DI and get it shiny, let’s plug it in. We pivot from the emotion we get when hearing it rather than over-thinking the creation of the tone.”

Partly, this approach is a direct response to how the songs are drawn up way back at the beginning. “Sometimes I’m the only one who’s playing guitar and it needs to be there and fill that space,” Hull says. “What we find when we record is that we generally take away whatever I was doing and find a cooler thing to put in its place. Our bass player is a really big presence. I love his playing, I love his thoughtfulness. He takes up a footprint that alleviates us trying to fill that space. On a song like Angel of Death, me and Rob are playing two different-timed parts high up on the neck, harmonising and falling in and out of each other, and he’s the one holding that thing down.”

Gear trades are a fairly regular occurrence between Hull and McDowell, and their work on The Million Masks of God was facilitated in part by one. Hull played a Coronado II that briefly belonged to McDowell. McDowell played a Troy Van Leeuwen Jazzmaster that briefly belonged to Hull. “We got them and immediately got jealous of the other one,” McDowell says. “The Coronado is super versatile,” Hull adds. “It can be really pretty, you can put on a pedal, it sounds good plugged directly in. It feels natural, woody. When we go for the fuzz, when we need the insanity, that’s when my sweet little red Telecaster with zero volume knobs comes out.”

The acoustics on the album are old Martins engineered by returning co-producer Catherine Marks, who split duties with Hull, McDowell and Ethan Gruska on this occasion, and there was some effort not to disappear too far down the wormhole. “There are a bunch of different pedals, but a part of the sound with [the Jazzmaster] is an Old Blood Noise Procession, which is this lovely shiny reverb that’s basically on the entire album,” McDowell notes. “If we wanted something to be singular and specific, like on Annie for example, that’s Jazzmaster right into a Neve 1084 DI. We didn’t get too crazy.”

The Million Masks of God works as a standalone record and also as a catch-all for Manchester Orchestra’s whole vibe as a band. It is both sweeping and intimate, elaborate and grittily straightforward. From the outside, it’s a machine running as it should. From the inside, Hull’s view is similar. “Black Mile… was a real challenge with us and Catherine on the production side, we butted heads because we didn’t trust each other,” he admits.

“We didn’t think she totally understood our vision, and she didn’t know if we were actually capable of accomplishing it. This time it was way more transparent – we’re going to produce the album, all four of us, but me and Rob are in the driver’s seat. We want a full collaboration where no one feels like we’re trying to take something from each other. We’re all on the same team.”

Manchester Orchestra’s The Million Masks of God is out on April 30 through Loma Vista.