“I’m a little bit out of my comfort zone”: Mark Morton on embracing acoustic on his latest solo EP

The Lamb Of God guitarist continues to explore his influences as a solo artist, with an acoustic in hand and an all-star band of friends to help him along the way. 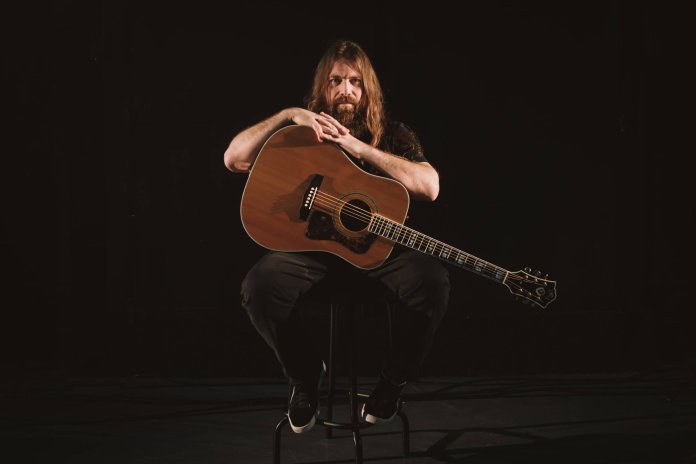 After 25 years in the game, most of them spent slinging bullish groove metal riffs as lead guitarist in Lamb Of God, hitting the stage at the Underworld in Camden should be a breeze for Mark Morton. But it’s not, because he’s out there on his own. “Every time I see my name on the marquee I get terrified,” he laughs.

Morton is in the early stages of a solo career that’s already produced a guest-heavy debut LP, Anesthetic, and a new acoustic-driven EP called Ether. His recent UK shows were unplugged, with his usual wall-of-noise approach swapped out for his trusty Guild D-55 and the honeyed tones of vocalist Mark Morales.

“I’m a little bit out of my comfort zone with it being under my name, so I’m getting used to that and being the guy who’s interacting with the crowd,” Morton says. “But that’s been the point of all this solo stuff, to see how I’m able to grow and diversify creatively and artistically, and as a performer.”

Ether is a neat counterpoint to Anesthetic. Both releases delve into the formative 90s alt-rock sounds of Morton’s youth, but they start in different spots. Anesthetic, which was unveiled last spring, balanced his serrated metal tones with forays into bleak outlaw country and sweeping post-grunge, backing up a cavalcade of star vocalists including Mark Lanegan, Myles Kennedy and the late Linkin Park frontman Chester Bennington.

The new collection, meanwhile, is a more ruminative affair that comprises three originals and two covers, with Halestorm’s Lzzy Hale tackling the Black Crowes’ She Talks To Angels and Morales getting his Eddie Vedder on for a sparse take on Pearl Jam’s Ten classic Black. The Crowes nod is another link back to Anesthetic, which featured contributions from two members of the seminal southern-rock band in drummer Steve Gorman and guitarist Marc Ford.

“The originals on the EP are really new,” Morton says. “I conceptualised the project before I had any music and wrote really deliberately. I picked up the acoustic guitar knowing I was going to write an acoustic project, so in that sense it was all deliberate. With Lamb, I can pretty safely say everything has been written on an electric guitar. It’s so riff driven that it just doesn’t lend itself to the acoustic instrument. But I’ve played acoustic the whole time and it’s cool to have a destination for those ideas.”

He adds: “There’s a real 90s component and the cover choices on Ether reflect my love for that era of music, which was a real coming of age for me as a person and certainly as a guitar player. That’s when I started developing a rudimentary beginning as a songwriter, and what a great time to do that.”

Morton is beginning to forge a creative shorthand with Morales after their regular stints together in the studio and on the road, but sparks also flew with Hale as they beefed up She Talks To Angels with a gritty, heartfelt vocal and searing slide work.

“I play slide for fun at home but I really haven’t gotten much of an opportunity to record it,” Morton says. “We did a cover of [Ministry’s 1991 weirdo staple] Jesus Built My Hotrod on the Burn The Priest covers album [2017’s Legion: XX] and I played slide on that, which was a blast. So for the cover of She Talks To Angels I worked out some simple slide progressions, and a few licks to try to play tastefully. I definitely wanted that texture.

“From the start, I loved the idea of doing that song but having a woman singing, and changing the protagonist. If you’re going to cover an iconic song like that it’s important to change something about the dynamic. Lzzy singing accomplished that, and she did a phenomenal job. She’s an incredible talent. She could have played all the guitars on it herself, she’s a great guitar player.”

With erstwhile Killswitch Engage vocalist Howard Jones also popping up on Ether’s Love My Enemy, the EP is another example of Morton’s high hit-rate when it comes to roping in performers who can bring creative swagger and big name clout to his projects. “I got a real crash course in that putting Anesthetic together,” he laughs. “It was a monumental task to put all those singers together, with all those schedules. Honestly, it was lunacy.

“The music was always in place, so it was about finding a singer to fit the song. We were lucky that pretty much across the board we got yeses. The excitement of not being so sure how it’s going to turn out with a collaboration has been one of the biggest thrills. I get to write songs with these amazing artists that I wouldn’t normally get to work with.”

Morton’s solo career also says something about him from a gear perspective. He’s someone who trusts what they know, so outside of his battle-hardened Guild D-55, which was employed throughout work on Ether, he returned to the Jackson Dominions he uses with Lamb Of God. Something that stands out is the breadth of sounds he’s able to wring from a setup that’s usually positioned to annihilate the front row with brute force riffage.

“When I did the first solo tour it was Jackson Dominions and a Mesa/Boogie Mark IV,” he says. “For Anesthetic we played around with some amps, because it was all over the place stylistically. Sometimes it called for a metal tone, like on The Never, and those were pretty much Lamb Of God tones on the rhythm guitars, but then other songs required a more dialled-back rock thing.

“The reason I developed the Dominion to be the instrument that it is, and the reason I’ve always been such a fan of the Mark IVs and Mark Vs, is because they are so tone diverse. The Dominion has coil tap switches for both pickups so you can be single-coil or double-coil, it’s got volume and tone for each pickup. You can really dial in a lot of dynamics into your tone. It’s the same with the Mark IV and Mark V, they’ve got a built in five-band EQ, so you can cover a lot of bases between that guitar and that amp.”

Check out this beauty! New @fendercustomshop Strat with @dimarzioinc Dominion in the bridge position. LOVE this guitar!

Soon, Morton will be back in the saddle with Lamb Of God. But he hopes that his solo work will have left a mark on those whose paths he crossed, and that his profile as a guitarist has been given a little more light and shade by testing the outer limits of his influences. “My favourite guitar player, Jimmy Page, is very accomplished on both electric and acoustic,” he says. “With a lot of my favourite bands, like the Black Crowes, there was a lot of electric and acoustic going on.

“It wasn’t a completely foreign concept to me, but there’s been a bit of a learning curve for everyone paying attention to this because I’m so known for being the guitar player for that thrash metal band. It might appear new, but it’s not new for me. I’ve always played that way. The new part is that I’m doing it publicly now.”

Mark Morton’s Ether EP is out now through Rise Records.