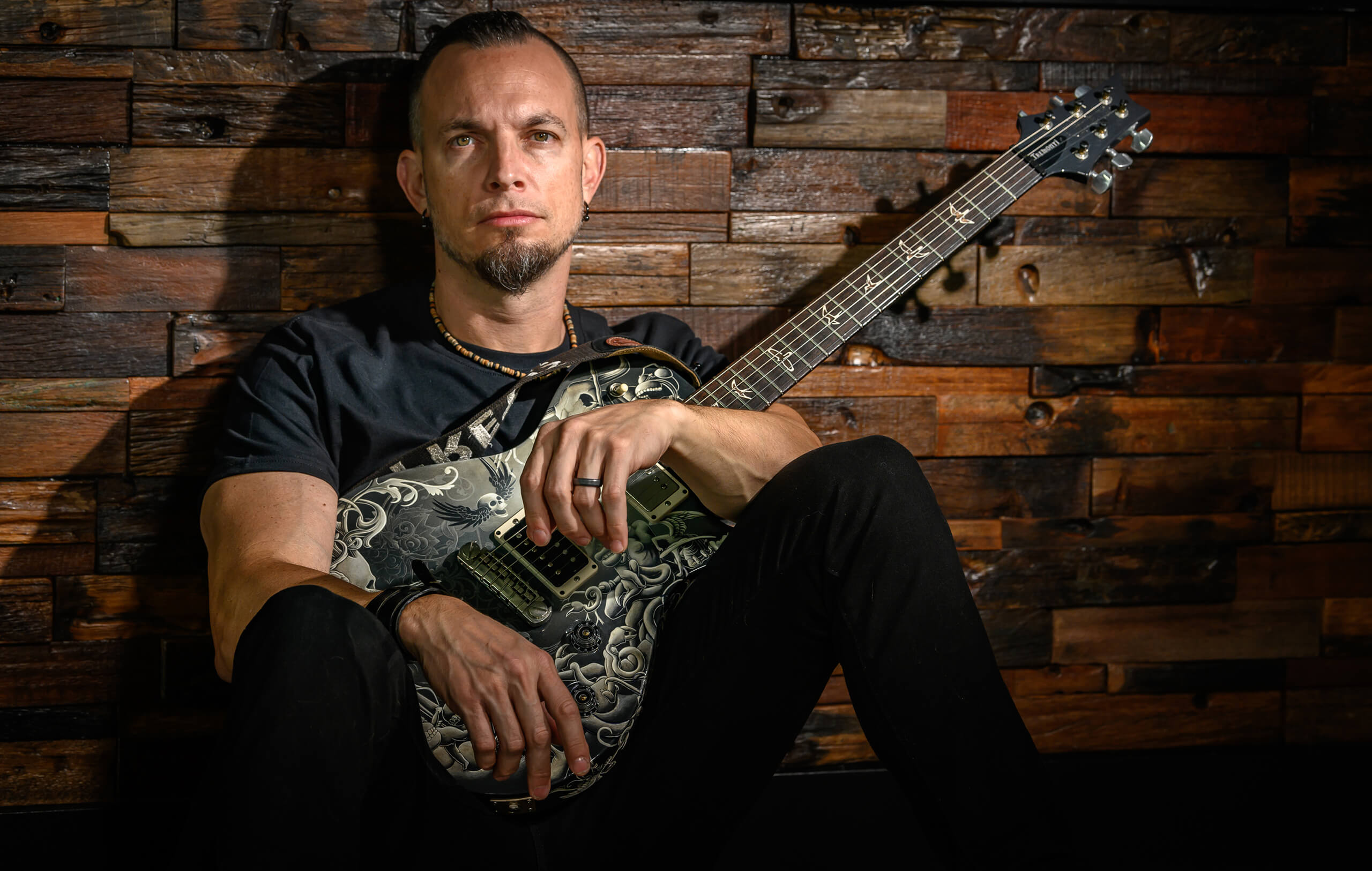 “Once the first song starts it feels like the old days”: Mark Tremonti on touring in Covid times and Creed reunions

Back with a new solo album, the Alter Bridge and Creed guitarist tells us all about the travails of modern touring, his long-term relationship with PRS, and the likelihood of a Creed reunion.

Like many musicians, Mark Tremonti has been busy working on new music since the pandemic started, and last month saw the Alter Bridge and Creed guitarist revealed his first new album for his solo project Tremonti since 2018’s A Dying Machine. With Marching In Time now out in the world and the guitarist once again free and able to tour again, we caught up with him to chat from a hotel room in Nashville where he awaited his next live date.

“Its great,” he tells us of being on tour again after so much down time. “We’ve been sidelined for way too long. We’ve been eager as hell to get out on the road. The only downside is that we’re all kind of trapped in a bubble. We can’t really do anything other than soundcheck and the show. Were pretty much stuck on our bus or in a hotel room. Touring life is somewhat isolated at the moment. Everybody has to be smart.

“Before we started this tour, everybody had to sign this paper that said we would follow these rules and it was like seven pages of things we can’t do, as far as having guests or friends come to shows and hang out unless you have a blood-related relative who is vaccinated and/or have a negative test within 48 hours. So it’s very strict. But once the first song starts, man, it feels like the old days. Once the music is flowing, it seems like everything is back to normal.”

Touring under such strictly enforced restrictions is a testament to just how much Tremonti and his band enjoy playing shows and want to get out and do what they love to do. Taking the risk of touring is also a testament to how essential touring can be for a band to promote a new record. Marching In Time was recorded in somewhat of an isolated manner, which served as a blessing in disguise, with only the band, the producer, and an engineer together, focused entirely on making the record over a two-month period. 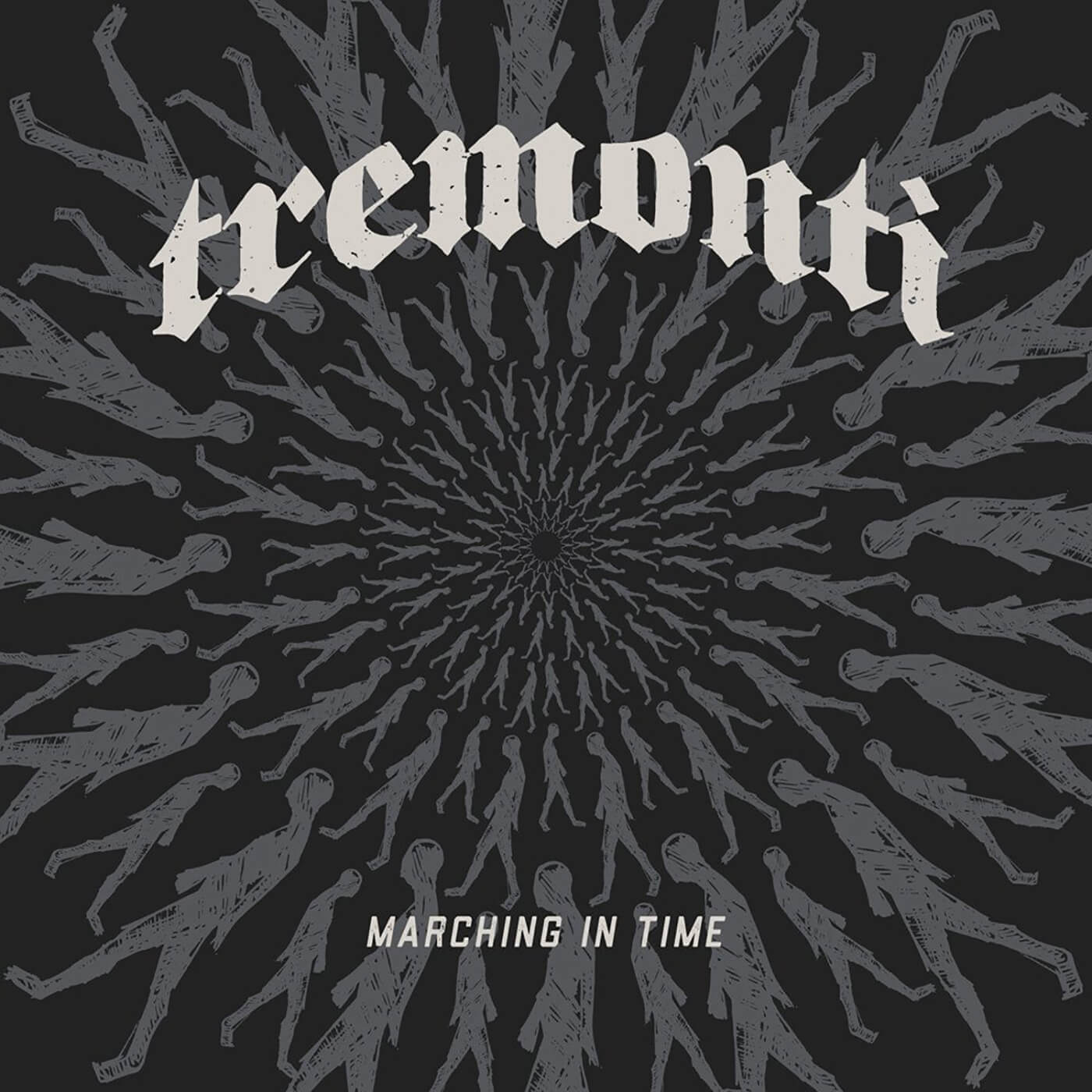 “I need to have my stuff airtight before I go into the studio,” he explains. “From the lyrics to the melodies to the programming of drums. Everything was done when we went into the studio. We just had to take the 17 or 18 demos and chop four of them off.”

The record is a solid offering with plenty to be proud of, but the song he is most proud of is the title track off the album, Marching In Time.

“On this album, the title track was inspired by becoming a father in 2020, which was a pretty awful year,” he reflects. “The song itself came about as a father’s point of view telling a child not to let how dark this world has become affect the way you grow and treat people.” 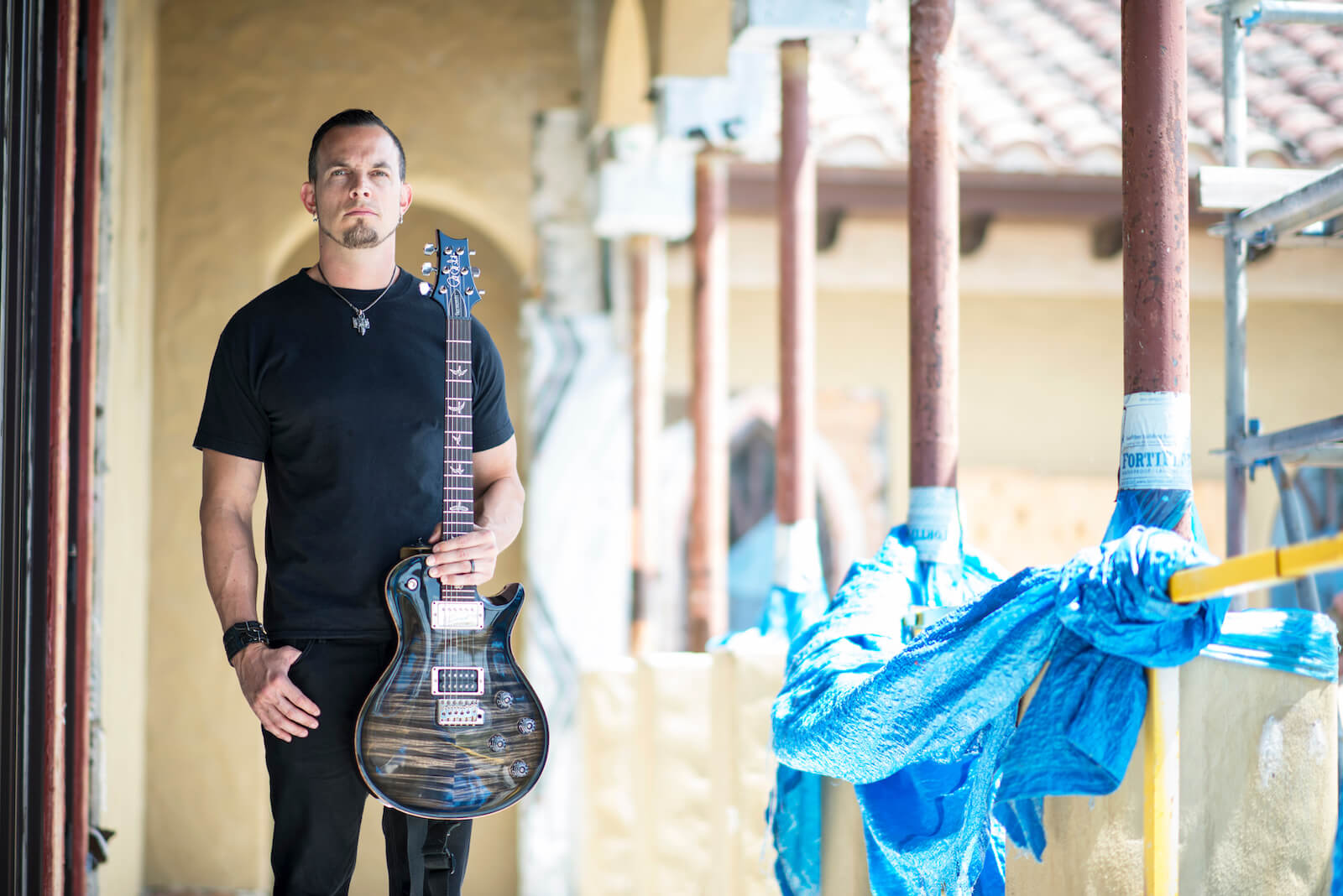 Mark has always viewed his guitar playing as a lifelong endeavour and a constant evolutionary process. He is always working on technique and it’s rare to see him too far from a guitar. Since the start of the Covid lockdowns, Mark has worked specifically on developing his right hand, the evidence of this work is best displayed on his favorite solo on the record, which is the one featured in the song Let That Be Us.

“I’ve been playing with patterns of fives for years,” he notes. “But I learned to play it all with alternate picking – so there’s no economy picking in it. That solo was the first time really got to use that to full effect and I’m really happy with how it turned out. I put the pick away and started trying to work on using all my fingers and trying to write songs with new alternative tunings.

“One thing I like to do is take patterns where I would normally use sweep picking and transpose that into an alternative picking sort of run. I’m always learning stuff and improvising. A lot of people, when they watch guitar players, they focus on the flashy left hand, but the engine of that player is that right hand. That’s something that separates good players from great players is that attack of that right hand.” 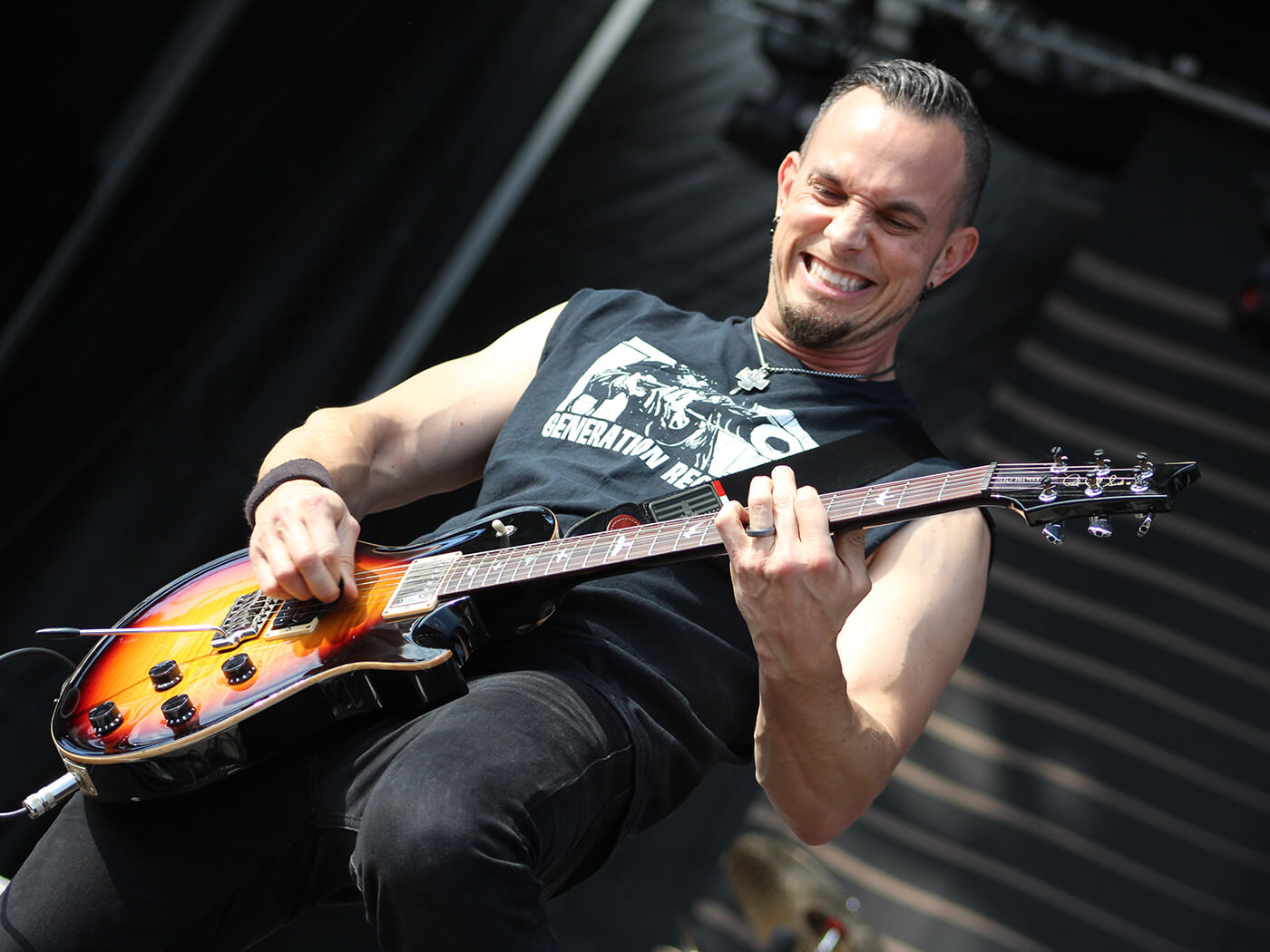 The theme of the album, staying strong through difficult times, has been somewhat of an enduring calling for Tremonti. In fact, it was a bout of bad fortune – the theft of his beloved Les Paul – that led him to purchase his first PRS, a collaboration that would last until this very day.

“My favourite guitar in the world was gone,” he affirms. “That’s how I started playing PRS for the first time. We got an insurance claim for that gear. It was the first time I had that much money, so I went to the local guitar shop and pointed to the top row and bought the first PRS I ever owned.”

Of course, this would turn into an endorsement that has lasted for decades, and his signature models have become some of PRS’s most popular and well-regarded guitars.

“I think around 2000,” he recalls of the first discussions around Tremonti becoming an official PRS endorsee. “They sent me a guitar and I loved it, but it just didn’t have the tone for the rock I was doing. It was more of a blues-rock sort of thing. The pickup selector was not where I was used to. They sent me a different guitar with a different layout, and I liked that one too, but it just wasn’t something I would bring on stage. After the third or fourth guitar, we sent back and forth they said, ‘Okay, why don’t we just make you one exactly how you want it, and we’ll make it your signature guitar!’ Thank god I was picky back then or I wouldn’t have ever got that signature guitar. I’m glad I get to play my favorite guitar in the world, professionally.” 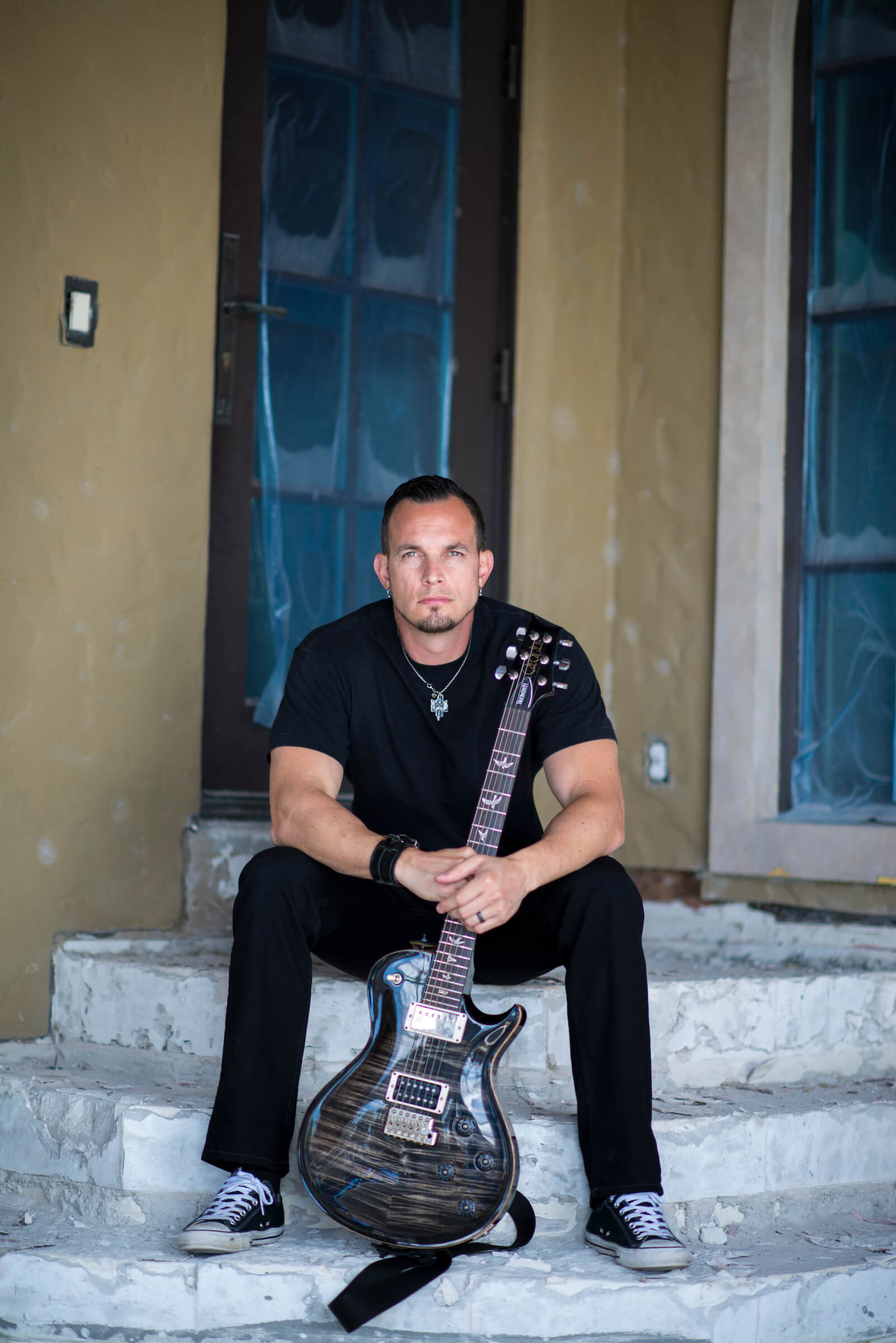 In addition to the latest Tremonti record, Mark is currently hard at work on another Alter Bridge record, while there’s been talk of late of a Creed reunion too. When we put the idea to him, however, he’s quick to pour cold water on it – at least for now.

“Well, there are always promoters that will bring that stuff up,” he chuckles. “But right now, I have a new record coming out. I’ve got to write another Alter Bridge record and get out and tour for that next fall. It’s really difficult to squeeze out three months or whatever it takes to do the Creed stuff. I have a six-month-old baby daughter and I’d like to spend as much time with her as I can. This tour is the first time I’ve been away from her and its already been brutal.”

Creed were a band with several strong personalities at play, and we wonder if there’s any personal issues that might be standing in the way.

“We’ve definitely had our ups and downs,” he admits. “We don’t talk too often. I think when it first gets put on the table it’ll be more of a decision for all the business heads to say whether it makes sense or not, and then we’ll see how things would go from there.”

Tremonti’s Marching In Time is out now on Napalm.