Ciaran McNally prides himself on the versatility of his instruments, alongside exquisite craftsmanship and blending traditional and modern luthiery, we caught up with him to discover how he got into the industry. 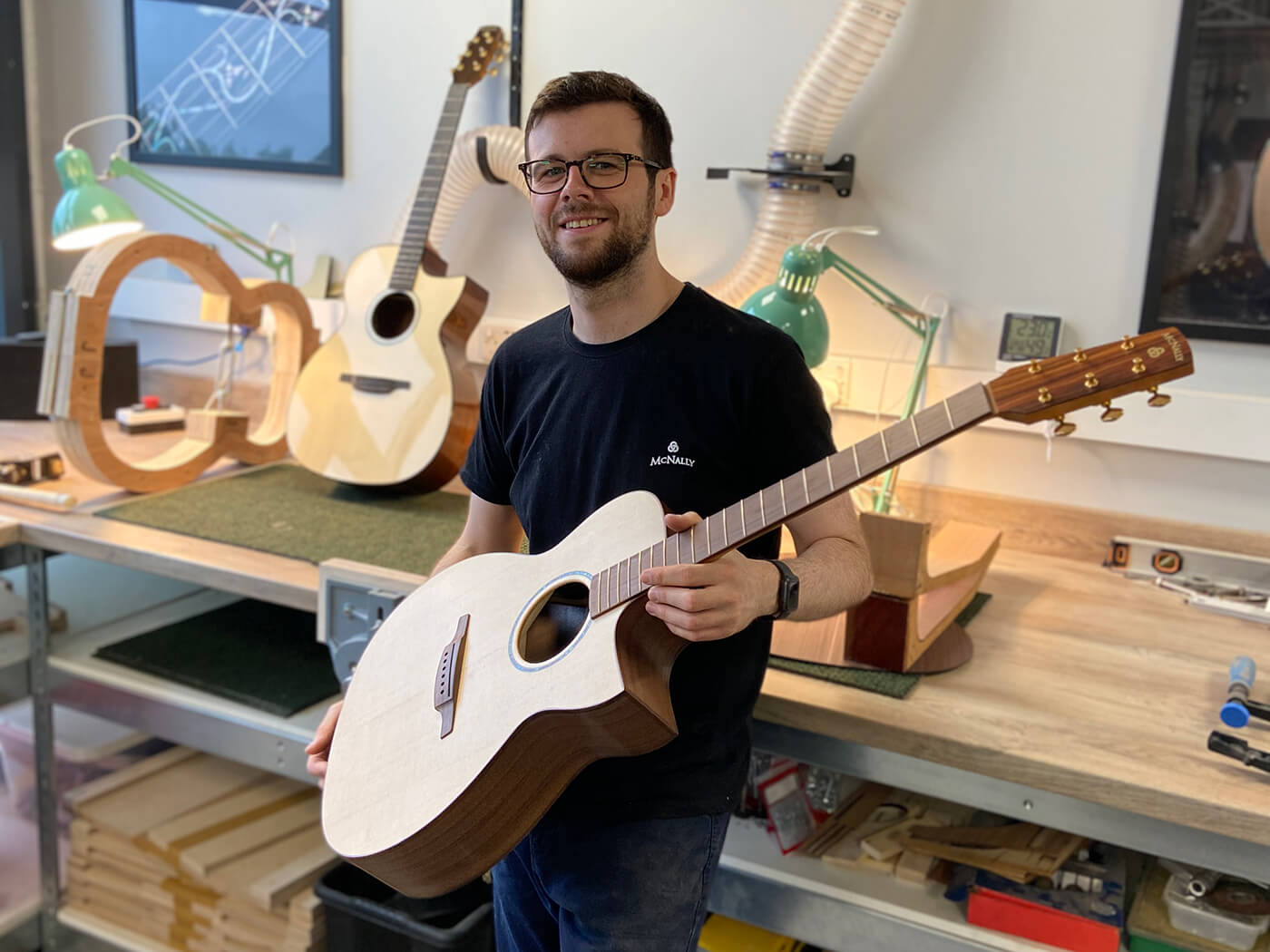 “I started playing guitar when I was around 14 or 15 years old. Lots of my friends played guitar, and very well. So, when I decided I wanted to try it too, I took lessons for about nine months before telling any of them!”

“I was more of an electric player back then. From there came the idea of modifying and upgrading my own guitars which were pretty cheap. After that came partscasters. I took an evening course in guitar making when I was 17 and was given a gentle nudge to make an acoustic guitar instead; I’ve never made an electric since! The first acoustic was a copy of a Martin 000 as I was really liking Eric Clapton’s signature at the time. That one travelled with me back and forth from Belfast to London a lot, when I was studying guitar making at London Met. It got pretty beat up by university life and as my skills developed, I started to notice how rough it was made.”

“Finally, when it got seriously damaged on a flight, I decided it would take more effort to fix than making a new one and would still be rough. I found it very therapeutic, cutting the headstock off, splitting the body in two with a bandsaw and chucking it in a skip! It was a moment of deciding to make better guitars.”

When did you realise that you had a viable business?

“Probably in the middle of 2019, which is about 14 years after I first started tinkering. I was finding more of the right customers and dealers were taking notice of what I was doing. That also lined up with me settling on the more defined style of guitar that I’m making now. I think you’ve kind of got to bang on the door for about 10 years before anybody notices. Having worked for two prominent guitar companies I already had an inside view into the industry and was acutely aware of how difficult it can be to make this a viable business.”

“While other people may throw themselves into a business somewhat naively, not knowing its realities, I was the opposite. I knew the time had to be right, the guitars had to be right, and I would have to be fully confident in my skill’s not just as a guitar maker, but as a business manager and a salesman. I also realised I couldn’t sell guitars I didn’t believe in personally, which very much led me to stop following/copying trends in guitar making and have confidence in my own judgement of what makes a McNally Guitar. I also realised that value for money is really important factor. While my guitars are still premium price items, they are at the affordable end of luthier market. I really enjoy being in this space, partly because I’m making guitars that I can very much stand behind, and would buy myself, but also because I believe there’s a lot more interaction with musicians that can happen.”

“I recently had some family investment to get the workshop up and running. I had an offer of help from others in the past which I was reluctant to take. I was always very clear that I didn’t want to venture out on my own in a half-cooked fashion. I wanted to do it properly with the right space, equipment and background budgets to exist as a real business. I felt that if I did it too early without real business considerations being made, I was setting myself up to fall out of love with guitar making. It’s too precious an activity for me think about that. Before this latest workshop, and while I worked for other guitar companies, I made my own guitars outside of working hours. Looking back now I’m realising that I’ve probably worked an average of 60 to 70 hours a week for five or six years! I always reinvested the money from those guitars into the next two or three guitars, new equipment or further training courses.”

“I’m not sure it’s even there yet but I’ve realised this is a moving target that I’ll probably never be happy with. I do think the brand is more consistent now with the ethos of the guitars, that being a cross between the Celtic and traditional American styles of guitar making. It’s not a ground-breaking re-invention of the wheel, but if you look a little closer you realise it’s actually quite unique. There are no smoke and mirrors or magical ethereal methods being used, and I’m not romantically attached to any particular method. I use a mixture of traditional and modern techniques. I simply choose the method that gives me the best result. My focus is not to be a ‘traditional’ or ‘modern’ guitar maker, only to make the best guitars I’m capable of.”

“I don’t have a one best-selling product, but my OM model is the one I have made the most versions of. It’s a prime example of the cross between Celtic and American styles, and this body shape makes for a very versatile acoustic sound. Like value for money, I believe that versatility in acoustic guitars is an overlooked but very important quality. I see acoustic luthiers claiming to have more and more tone and sustain, but I struggle to see it being utilised by musicians. Versatility is a really important factor in the inspiration an instrument can give. I started to notice that is was the versatile instruments that people fall in love with and don’t part with. I think the customers that gravitate towards my guitars appreciate this approach.”

“I’m very proud to have some of the best guitar stores in the world selling my instruments alongside some of the best guitar makers in the world. However, nothing beats a player telling you that it’s their go to instrument. I also had a character named after me in The Fall tv show, where all the characters are named after guitar brands. That was pretty cool. I’ve also had a few of my guitars bequeathed as treasured possessions to new owners in will’s, which is very humbling.”

What’s next for McNally Guitars?

“I’m currently working on the first McNally signature model with an incredible guitarist. This has a few new features for me and has been developed in partnership with an electronics genius. All to be revealed around September/October 2020. I’m also working on a new dreadnought model. I love traditional dreadnoughts, and this will be focused towards a more traditional sound. I believe a good dreadnought is truly hard to beat when it comes to folk music and in particular Irish Trad. I’ll also be making my first multi scale fan fret in early 2021.”

Find out more about McNally Guitars at mcnallyguitars.com.