The Nigerien guitarist on building his own guitars, feeling a left-handing fraternity with Hendrix, and how his nomadic outlook makes recording in a studio a tricky enterprise. 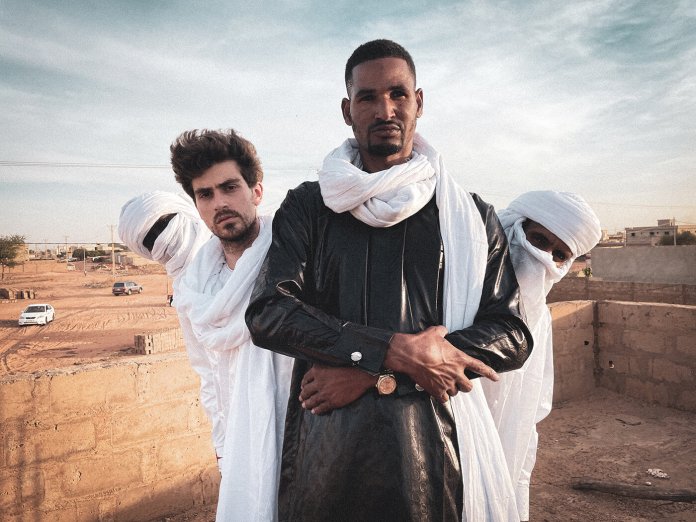 Mdou Moctar’s Afrique Victime opens with a low hum of activity: insects flutter about their business, a rooster crows, footsteps pass with the quiet crunch of the desert. His guitar, when it comes, spirals away from this place into something otherworldly – drone-shred desert blues performed with abandon to match its dazzling technical prowess.

“In my environment I’m used to always having people, villagers, walking around, there’ll be animal sounds around me, goats, chickens, camels,” Moctar says. “I am essentially a nomad, that is my culture, and I want that to travel with me even when I’m on the move. I need it. I can’t forget these sounds from my native village.”

Moctar got his start in Agadez, a Saharan city in central Niger. His music is tied to a rich Tuareg guitar tradition as much as it is an anomaly, always shifting in its presentation and seeking to reframe its constituent parts. From his use of Auto-Tune through to acoustic laments and ear-boggling leads, he confronts the listener at each turn like someone taking the long way around and still comfortably reaching their destination first.

Having left a job with a drilling company in his late teens to focus on music, Moctar built his first guitar from scratch using wire from bike brake cables and pegs from sardine cans. A left-hander, he learned to play in secret, away from religious parents who disapproved of that sort of thing. “In the beginning, when I only had my guitar that I’d made myself, I was aiming for takamba, which is the Tuareg traditional style of music,” he recalls. “I was really trying to acquire that tempo. When I acquired a normal guitar for the first time, I would say that my style developed quite naturally from there.”

In 2008 Moctar’s first record began creating a buzz through Bluetooth swaps on mobile phones, moving from his cassette originals through the Sahel in its own spin on a word-of-mouth tape-sharing network. A decade ago his song Tahoultine made its way onto the Sahel Sounds compilation Music From Saharan Cellphones, curated by label boss Christopher Kirkley, who’d soon cast Moctar as the lead in Akounak Tedalat Taha Tazoughai, a riff on Prince’s Purple Rain filmed in Tamasheq, the Tuareg language.

His is a good story, full of surprising twists and outsized characters, but it is fused with music that’s equally arresting. Afrique Victime is perhaps the most complete vision Moctar has yet presented of his myriad influences and stylistic flourishes, welding his pyrotechnic electric playing to dense acoustic textures and found sounds. It’s a remarkable record performed by a band – rounded out by rhythm guitarist Ahmoudou Madassane, drummer Souleymane Ibrahim, and New York-based bassist Mikey Coltun – approaching the peak of its powers after hundreds of shows alongside one another.

“The band is very used to playing together,” Moctar says. “It’s just been so long now. Since I started composing this album we’ve been playing it together and, you know, we are a very tight group. We all speak the same language, and Mikey, who’s the newer member of the band, has a very good ear and is able to adapt very fast to what we’re playing. We practised a lot. It’s been quite easy.” 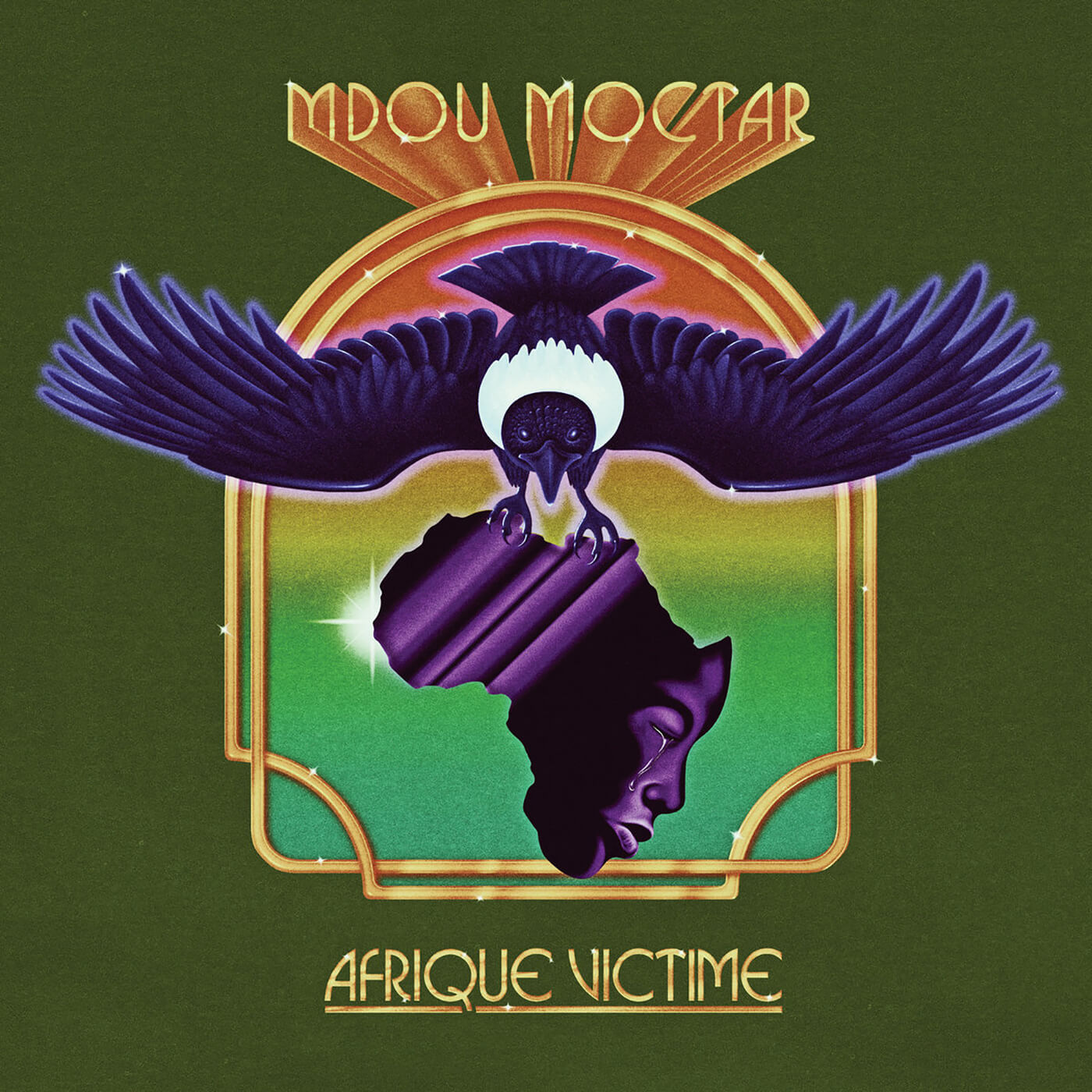 It doesn’t sound easy. Moctar’s approach to guitar is to view takamba and assouf structures through the lens of blown out, hyper-complex rock leads – Jimi Hendrix and Eddie Van Halen hold sway in his imagination alongside the legendary Nigerien guitarist Abdallah Oumbadougou, whose own music lit the way for Moctar alongside Tinariwen and Bombino. The first time he heard Hendrix play, through car speakers while out on the road with Kirkley in Spain, maybe in 2014, maybe a few years later, he presumed he was hearing Tuareg musicians in action. “The very first song I heard was Hey Joe. My mind was blown. I really loved it,” he says.

“Before he started singing I was confused because I thought it was Tuareg music, just from the guitar. Later on I found out that he was left-handed and that made me feel a strong bond to him. The first time that my film was shown, afterwards a group of friends gathered and they made me listen to [Van Halen]. I loved it. To be honest I don’t really know the classic rock musical label very well, what corresponds to what style. Growing up the only style I did know quite well was reggae. But as I was playing, people would say, ‘What you’re playing sounds more like this style or that style, what you’re doing is rock music.’”

The task of harnessing the band’s live energy fell to Coltun, who recorded and produced Afrique Victime one piece at a time while out on the road, pairing studio stops with mobile sessions captured in apartments, hotel rooms, and backstage at shows. “Mdou is freaked out by studios and, as producer, it’s my job to make him as comfortable as possible,” Coltun recently told Mojo’s David Hutcheon. “This time I was trying to strategically trick him into recording backstage, at venues, in homes. ‘Just play, man, we’ll make anything work.’”

“It wasn’t hard at all for me,” Moctar says of the piecemeal, on-the-fly nature of recording. “It didn’t make that much of a difference. Usually, when I’m recording songs I never even write them down. It’s never a formal process in the studio. I’ve basically got all my songs memorised in my head, and there’s quite a lot of them. When we want to make an album, we just pick eight of them. We go to the studio as a band and decide which ones would be best. The whole band works that way too. We play as it comes, so it’s quite similar to how we function usually.” 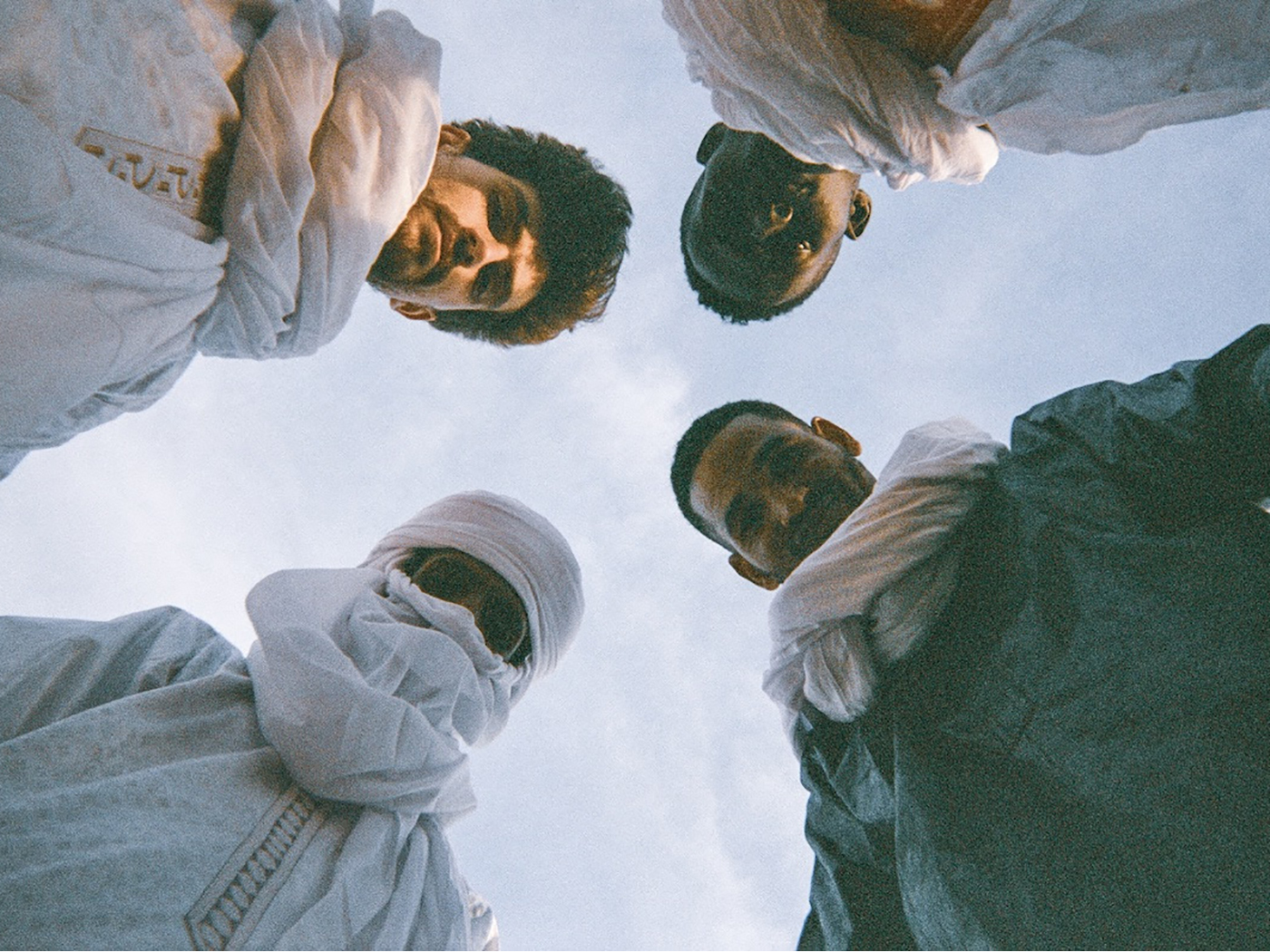 Utilising a barrage of open notes and rapid hammer ons, Moctar dispenses surging, fuzzed out melodies and countermelodies, offsetting intuitive fingerpicking patterns by using the index finger on his left hand, in place of a pick, at tremendous speed. These days he can often be seen wringing these snaking, mystifying lines from a Stratocaster.

“I used to have another electric guitar before my Stratocaster, but what was terrible is that I’m a left-handed player and the first guitar wasn’t adapted to me,” he says.

“It was very difficult. When you try to play as a left hander on a right-handed guitar, sometimes you’d break the strings, and it would fall when I was trying to hold it up straight. It was very difficult. When I met Christopher, I told him about this and asked him if there was such a thing as a guitar made for left-handed people. And he said, ‘Yeah, of course.’ I said, ‘Well, I need an electric guitar.’ He came to Mali with the guitar and made sure that it reached me. That was in 2011. That was a big change for me.”

Afrique Victime is less propulsive than its predecessor, 2019’s incandescent Ilana (The Creator), highlighting relationship between Moctar and Madassane – who can often be found sporting a Mustang of late – in passages that prize the separation of individual elements within the mix as much as they do the overriding groove. Discussing their partnership as guitarists, Moctar speaks almost as an older brother. “Ahmoudou was a fan of my music before he even learned to play when he was a kid,” he says. “Our story is that he was in Agadez originally, and I was in the Abalak village, where my mother was living. I had been living with her for a very long time, and his mother was also in that village.

“I composed my first album Anar, but at that time Ahmoudou was very young. He hadn’t even started playing any guitar. When he visited to see his family on his mother’s side, he would come and see me. One day he explained to me that he wanted to become an artist and he loved music. During one summer break he spent three months with the band and at the end of that I gave him my guitar before he returned to his studies in Agadez. Later on, I had to go back to Agadez, because it was the city of music, and he was there as well. Ahmoudou has always been playing with me since his childhood. My style is in his blood and he was learning bit by bit with the band. That makes it exceptionally easy to work together because that’s always been the case.”

Having already explored so many avenues presented by Tuareg music – through synthesizers and electronic drums on Anar, acoustic wandering on Afelan, straight up guitar worship on Ilana – there is an argument that Moctar is proving the versatility of traditional artforms as the world changes around them. “I don’t really have the answer to that,” he admits. “I don’t know what is to come in the future for Tuareg music, but I do know that I play my own style, which can be quite versatile. Another thing I do know is that many people in the west have never heard Tuareg music before, and it seems to me like the human ear always needs to hear new things.”

Mdou Moctar’s Afrique Victime is out on 21 May through Matador.